Once the country’s second-biggest industrial town and now the fourth-largest city in Denmark, Aalborg has today evolved into a research and knowledge centre. Its cultural activities have moved into the former factory buildings along the fjord, where the demise of the industrial society created the potential for an alternative use of the harbour.

The master plan for Aalborg Waterfront links the city’s medieval centre with the adjacent fjord, which has previously been difficult for citizens to access due to the industrial harbour and the associated heavy traffic. By tying in with the openings in the urban fabric, a new relationship between city and fjord is created, and what was formerly a back-side is turned into a new, highly attractive front.

A new promenade with various kinds of plazas and urban gardens facilitates activities such as markets, ball games and sun-bathing. The central activities field – a play landscape inviting all age groups to motor-activities – can accommodate various games and sports, from beach-volley in the summer to ice skating rink in winter.

Following the huge success of the first phase of the new waterfront, designed and real-ized by C.F. Møller Landscape in collaboration with Vibeke Rønnow Landscape Archi-tects and COWI from 2004 to 2013, the second stage continues the same basic approach and adds new variations of spaces centred on the Coop Himmelblau-designed concert hall, the Aalborg House of Music (Musikkens Hus). 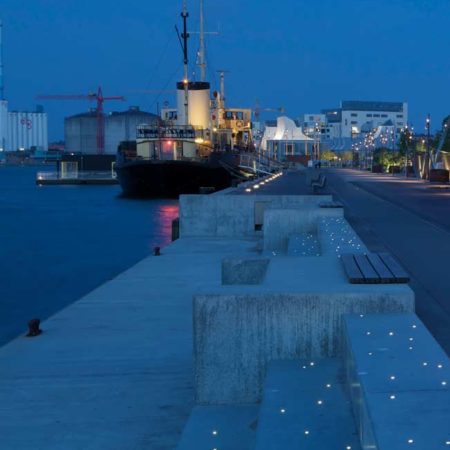 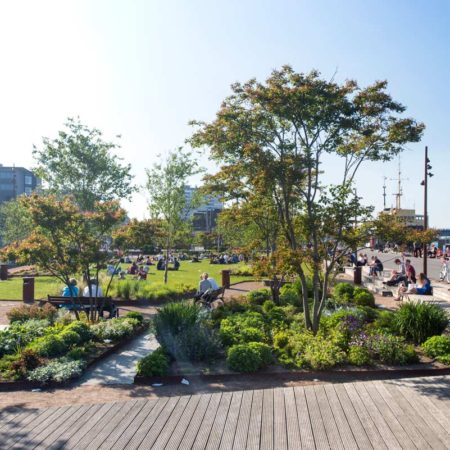 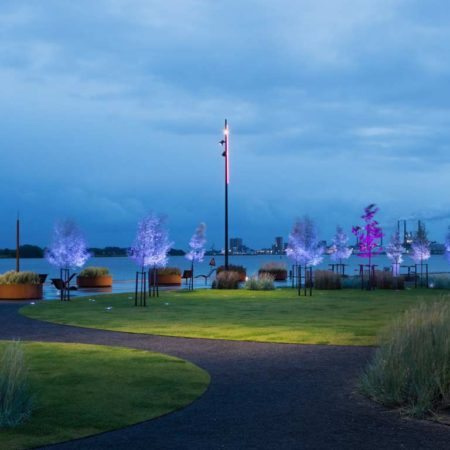 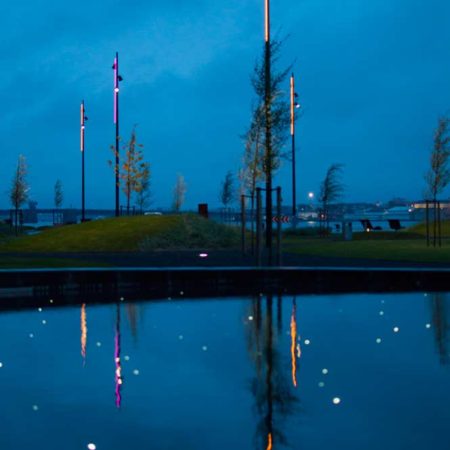 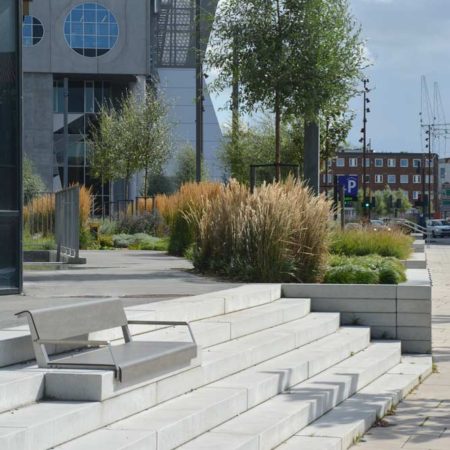 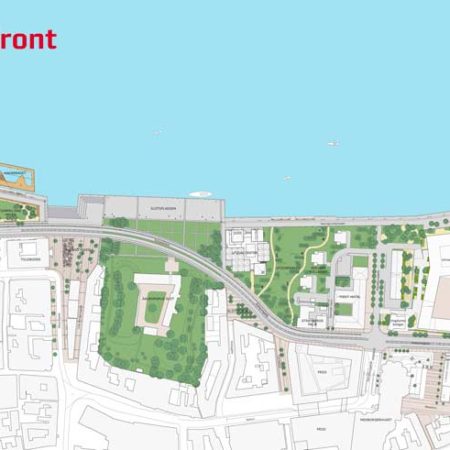 The overall ambition of the transformation has been to give the use of the port back to the city, and to link the central urban districts to the fjord. The first phase of the new waterfront was opened in late 2011, and the multiple-award winning design has set a high standard for the next phases of the development.

The master plan for the second stage of Aalborg Waterfront is thus based on the princi-ples from the first stage, with the promenade as a unifying element. It has also drawn inspiration from the meeting between the dunes and the flat foreshore, which is a special characteristic of the larger fjord landscape.

On a social level, the entire design is primarily focused upon creating meeting spaces for people of all kinds. This includes the wide array of immediate neighbours surrounding the waterfront. Especially the historic urbanity suffered a lack of green amenity space, and as such the new waterfront provides an important upgrade of the local living quality.

Due to the existing relatively low quay levels, combined with the construction of new buildings such as the concert hall, university and student housing, efficient flood protec-tion has also been a key factor in the design.

The central idea of the second phase is the continuation of the waterfront promenade as a “marsh” in combination with a light curving plinth, upon which distinctive, freestanding buildings are located as in a raised dune landscape. In this ensemble, the plaza around the concert hall is highlighted by an independent, rectangular plinth.

The urban plinth provides flood protection, and the incisions carved into it create a series of spaces with varied functions – protected from the wind by the plinth’s sides, which are designed as seating steps.

Spacious plazas are integrated into the promenade sequence, creating lush green spaces with dense groves of trees. The planting consists of trees, shrubs and grasses that are native to North Jutland fjord landscape.

The lighting is essential for the perception and for the identification of the water front in Aalborg and it contributes to making the urban open spaces along the water attractive to visit – even after dark.

In contrast to the fine materials used in the plinth around Musikkens Hus, the other sur-faces used in the area are raw and simple, in asphalt, in situ-cast concrete and wood – just as in the first stage of Aalborg Waterfront.

Aalborg’s harbour front has undergone comprehensive renovation in recent years. The former bustling industrial area is now home to world-class architecture, stunning gastronomy and big city life all the way down to the water and in fantastic surroundings.

The first stage has already become an important part of the city’s life and the setting for a wealth of activities all year round. Jomfru Ane Parken has around 800,000 visitors a year, and the harbour swimming pool was enjoyed by 100,000 bathers in its best season in 2014.

The whole area has taken on a different character, not least because of the huge buildings there: Musikkens Hus, attracting thousands of concertgoers and others, 272 student flats and a university building housing 1,500 students. The presence of such a mixed bag of residents, visitors and tourists adds a special pulse and atmosphere to the area, where music and the creative courses run by the university play a major role. 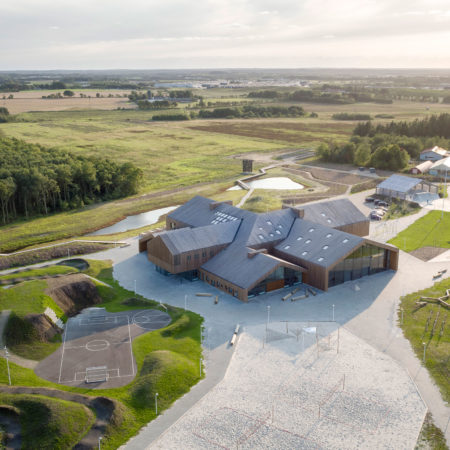 The Heart in Ikast – Activity band