Henri Bava, Michel Hössler and Olivier Philippe, the three founders of Agence Ter, all driven by the same curiosity, are pushing back the limits of their profession by experimenting with a transverse approach to urban and territorial projects, far from the usual opposition between urban planners, architects and landscape designers.

The continuous broadening of the in-house expertise now means that Agence Ter can offer solutions to complex urban planning projects, whilst still approaching them from the landscape perspective. The team focuses its attention on existing conditions, the context, relying on certain outstanding elements of the landscape to propose a conceptual approach capable of maintaining the constituent components of a site whilst triggering a renewal of the venue. Agence Ter acts with the firm desire to promote landscape as a vector for metropolitan change.

Conceptualising the essence of a project whilst using physical, geographical or historical and memory-based elements as a foundation allows a better shared understanding of the challenges, fostering dialogue between the stakeholders. Far from opposing the contextual and conceptual approaches, Agence Ter aims on the contrary to achieve a judicious balance of the two, ultimately operating at different scales, from the district to the inter-urban area, and all the way up to the large-scale territory.

The possibility of exploring large-scale territories was very quickly offered to Agence Ter, almost on its creation: the direction set by incoming orders and the desire to diversify experiences led to create different branches firstly in French Guyana and Germany and recently in Barcelona, Shanghai and Los Angeles. This contact with territory-related issues in different cultural contexts allowed the acquisition of a real capacity to adapt to the most wide ranging scales and grasp cultural specificities to support the development of the territory, whilst maintaining a common theme.

Agence Ter is now developing its approach to large metropolitan territories through planning studies placing the geography and its landscapes at the centre of the city-territory problematic, thus offering a tool for change, within the frame of a concerted approach, at a very early stage of the project with the involvement of all stakeholders.

Developing an integrated approach with geography

The contemporary city is constantly changing and the urban, peri-urban and suburban aspects must be considered with a greater landscape presence. It is only by starting from the landscape, and the understanding of this, that we can develop new urban forms: the range for experimentation is now very broad, fostered by the widely shared desire and obligation to address at a very early stage of the project the questions regarding the environment, surface water management, energy efficiency, the optimisation of public-space maintenance, the integration of new materials and technologies. This goes well beyond the issue of sustainable constructions as it is the notion of a sustainable territory that must be considered within the context of a project approach, for example to demonstrate that the creation of a new urban structure can strengthen a site’s biodiversity. 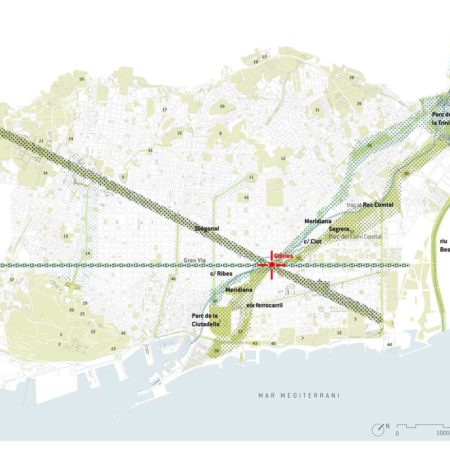 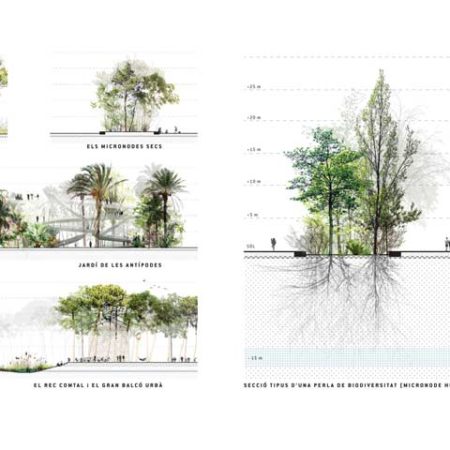 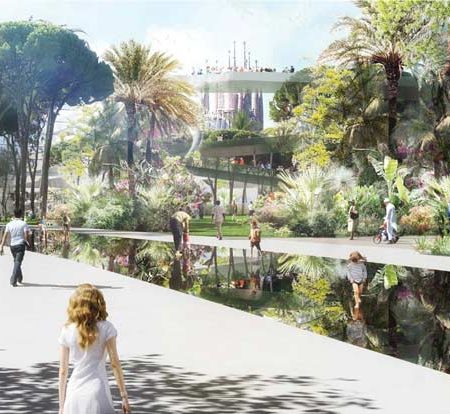 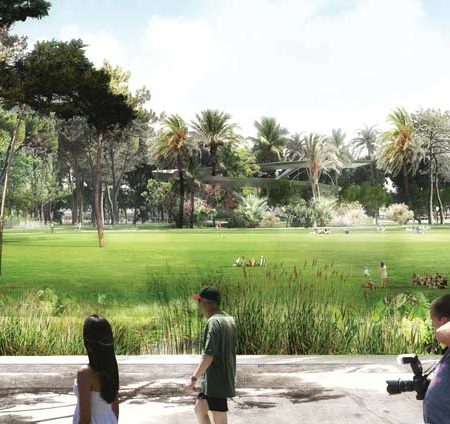 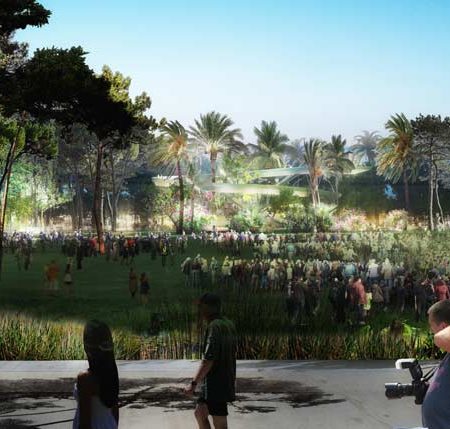 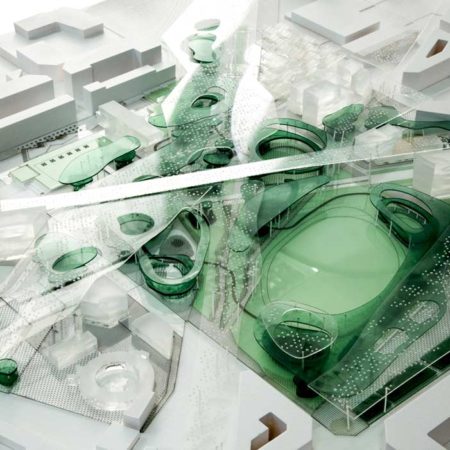 Situated at the intersection of the large axes of Barcelona that were introduced by Idelfons Cerdà, the Plaza of the Catalan Glory was the subject of an international competition. The winning project by Agence Ter, named the Urban Canopy, is based on three main objectives: Developing an urban eco-system that hybridizes city and nature. Secondly, creating a synergic relationship between the underground, the city-ground and the horizons of the metropolis. Finally, offering a space that is able to host both the activities that are linked to an urban square as well as those found in a park.

The first action is to optimize the continuous character of the ground. Without any interruption with the surroundings, it unfolds itself like an open plan that is practically horizontal, authorizing all transits, capable of a maximum versatility. The second action is to re-establish the natural exchanges between the skyline and the underground, by fertilizing and de-mineralizing the surface, currently mainly impermeable and sterile. The third action proposes a canopy of vegetation. Within the thickness of the « vélum construit » of Barcelona (28m), it articulates the green and civic axes of East-Barcelona. The fourth action is that of intensification, expressed by a constellation of nodes that punctuate the space of the park. Finally, the completion of the diagonal line as the major axis is the ultimate action of the project strategy.

An ecological park along the Seine River 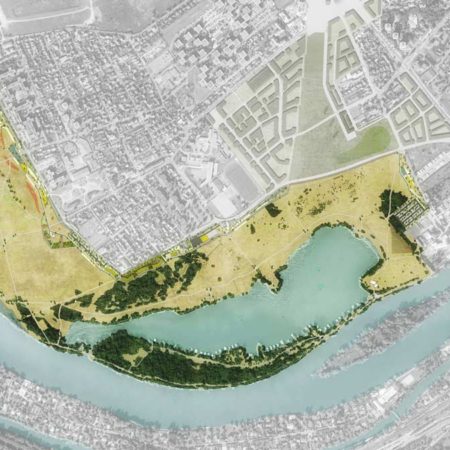 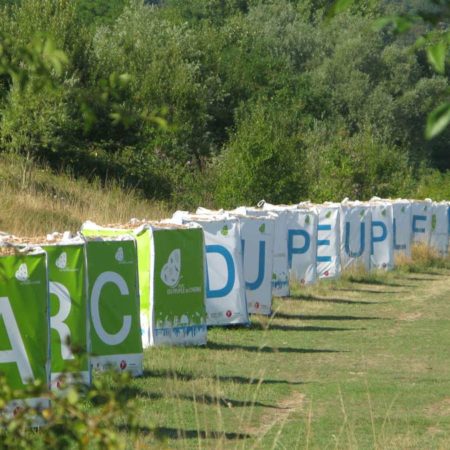 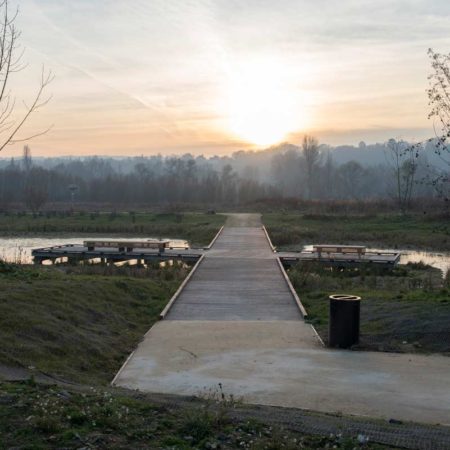 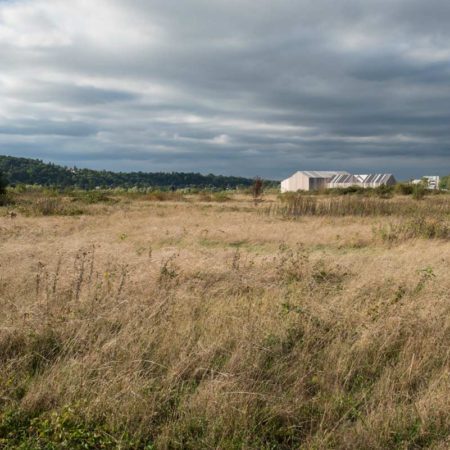 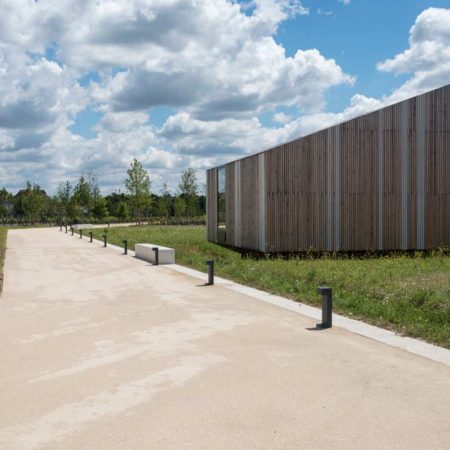 The “Peuple de l’Herbe” Park is sited in the meander of Chanteloup, between Carrières-sous-Poissy and the Seine. At different times dedicated to market gardening or to aggregate exploitation, this territory has changed its image completely to a space with no real dedicated function. Two big lakes and the traces of the city walls were punctual remains in a grass-covered plain, with the open horizon of the Seine recalling its fluvial context. Reinventing the purely ecological concept of a park, Agence Ter used the qualities of a contemporary peripheral landscape park and of an extensive ecological area to form a synergy.

The interventions consist of multiplying ecological zones and introducing management strategies to augment the attractiveness and the environmental qualities of the site. The proposal is at the same time realistic and ambitious, trying to reconstruct an entire set of natural environments native to this section of the Seine Valley. Situated in a floodzone, it is crucial to take into account the micro-topographies responding to flood risks and to respect the dynamics of the river while limiting public access at certain places to stimulate the development of certain species for the future.

The park is composed of three distinct layers: The active strip that treats the transition between park and city; the natural space, composed of large brownfields and temporary ponds; the zones of contact with the river and the lakes.

Redesigning a square in the historic heart of Los Angeles 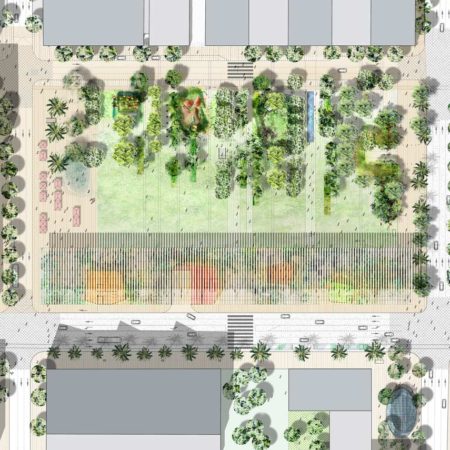 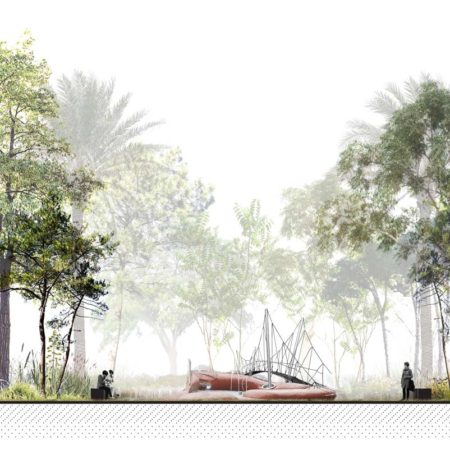 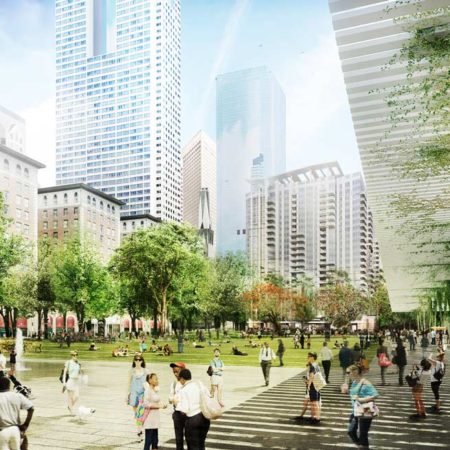 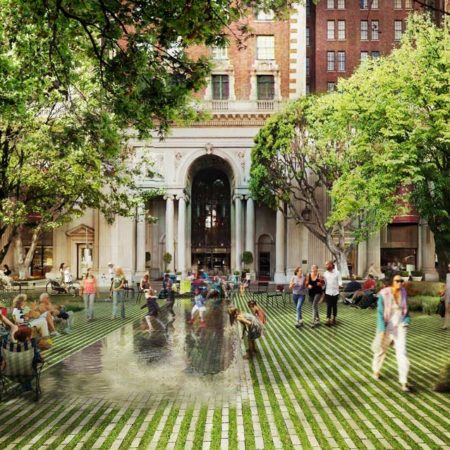 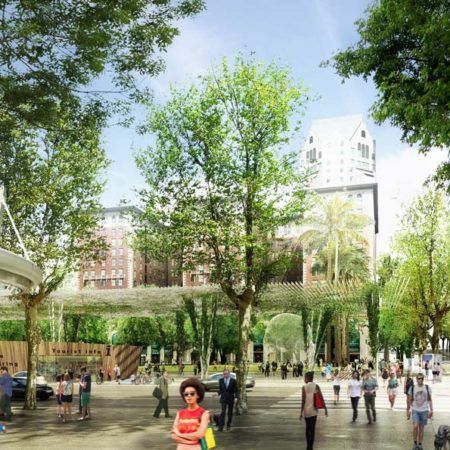 Pershing Square is one of the historic public spaces of Downtown Los Angeles. After multiple transformations, the park has lost its initial function as a green lung and meeting place for the inhabitants. The underground parking from the 1980s raised up the square, isolating it from its urban context, leaving a walled, concrete and inaccessible space.
Agence Ter has developed, together with its team, a vision for Pershing Square: a new paradigm of public space, integrating social and cultural life, nature and the urban fabric, based on a project of a “canvas”, to be developed fully with inhabitants and stakeholders.

The base principle of the design is to put the square back again on the same level as its surroundings: “radical flatness”. A meticulous redesign of the roof of the parking allows this continuous surface. Pershing Square will also be full of shade again; through a native tree canopy covering diverse gardens and a vine-covered pergola structure covering kiosks for diverse uses. At the center a great lawn welcomes activities of all scales, from a picnic to a concert to a movie. Sustainability is inherent to the proposal: water is managed and collected, plant species are drought tolerant, and the pergola generates power for the park, while it also includes a significant light artwork. The timeless design, elegant in its simplicity, installs a vibrant, open and dynamic heart in the center of Downtown Los Angeles. 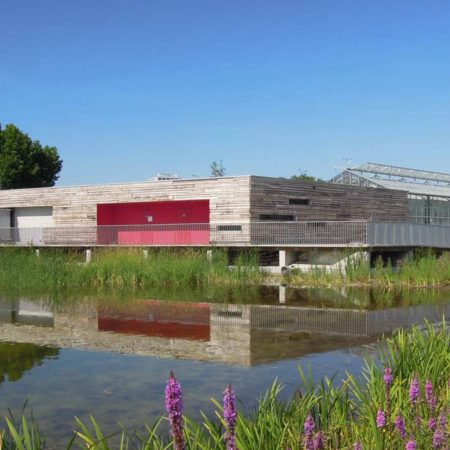 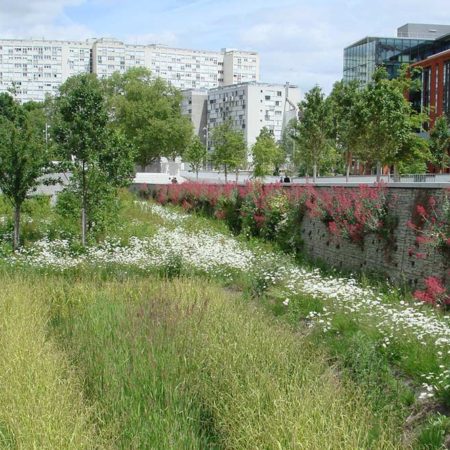 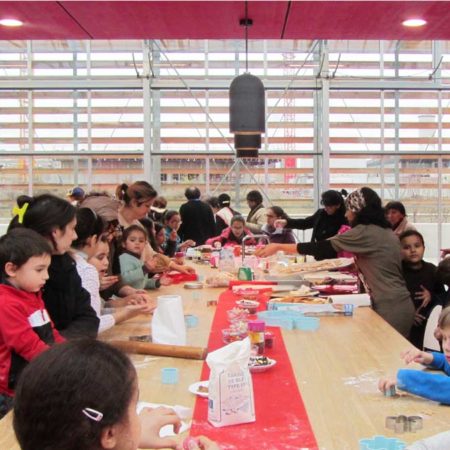 The Integrated Development Zone of the Docks is a large 100 ha area on the banks of the Seine, on the edge of Saint-Ouen’s historical centre at the gates of Paris. It is the transformation of an almost monofunctional, industrial territory into a new mixed development fully integrated in the existing town, with the 12 hectare Park of the Docks providing an extensive open space on the banks of the Seine.

The park was imagined as alternating hollows and solids, which materialize two types of place: spaces for nature and gardens for the public. This is a park that offers different kinds of conviviality and experiences due to the generosity of its spaces and its multiple atmospheres: light/shade, quiet intimate spaces/busy active places, and wide open views/framed vistas. A sequence of compositions, orientations and views of the distant landscape, of the city or the park itself.  Valleys, ponds and large sunken surfaces gather rain water, highway run off and floodwater from the Seine. The park is a hydraulic system, a huge reservoir that filters water and uses it to irrigate the plantations. The ponds and filtering gardens welcome a wide range of fauna: tritons, dragonflies, frogs, birds and insects. 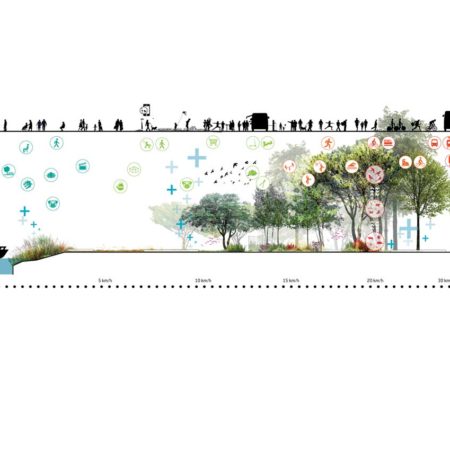 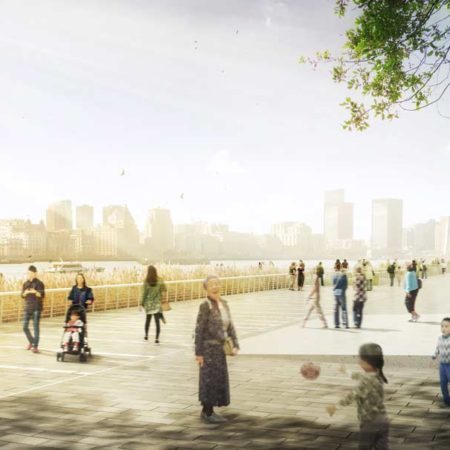 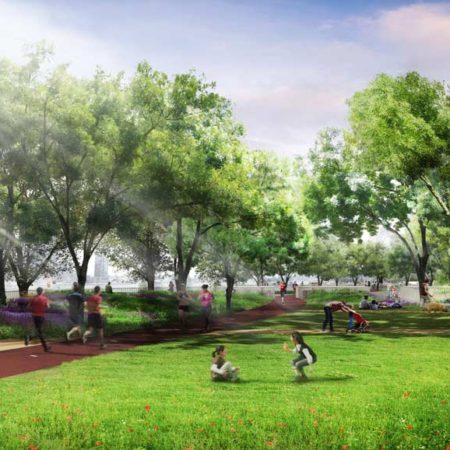 The municipality of Shanghai has initiated a large scale process of reconstruction of 21 km of the east bank of the Huangpu River. Situated in the heart of the metropolis, this project aims to create a new way of life on the currently unoccupied or strongly industrialized river banks, giving high visibility and a strong identity to this metropolitan space. The project creates a living interface between neighborhoods and the river, a new width articulating soft transport, ecology, public spaces, activities and economy. A triptych of linear spaces (discovery path, main path and sports path), organize the different flows and types of usage, in continuity on the 21km of river banks. Each of these paths comes with thematic facilities to animate the bank, which becomes an urban setting for everyday activity and nightlife, as well as for big local and national events.  The project reinforces the presence of nature by giving space and visibility to the natural dynamics of the river. Urban hubs on the existing ferry stations will favor accessibility to the river bank, by articulating urban public transport and river links.

This project will open the landscape of Shanghai onto its river by encouraging varied and vibrant urban life on the banks. Shanghai will find here a waterline, reflection of its symbolic skyline, and a new public space expressing local culture as well as contemporary international lifestyles. 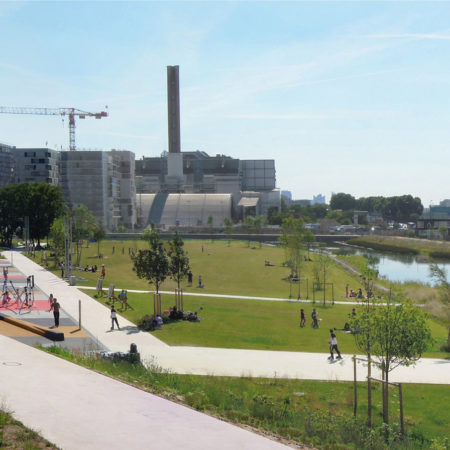