This place in the early Edo period was located on the banks of a pond, which was maintained as a water source, and was a relaxing and lively open space surrounded by greenery. The pond was gradually reclaimed and turned into land after losing its function as a water source. Before starting this project, the greenery of this place had been lost and this place was a city filled with small and medium-sized old buildings. The concept of this redevelopment project is to revive the underlying value this city with greenery and wat.

Now, the skyscraper building is covered in a landscape of greenery and water, connected to the city through greenery, creating the new representative of the city. 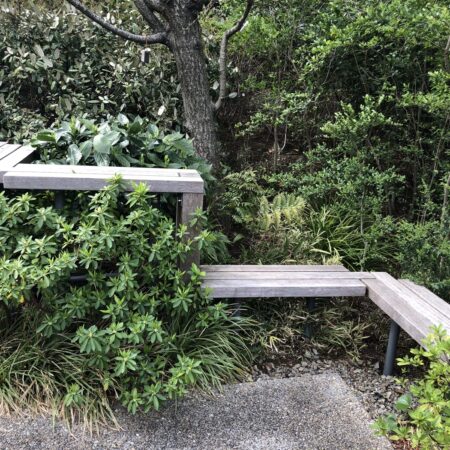 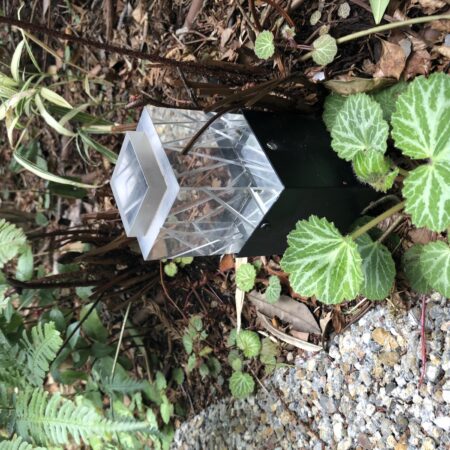 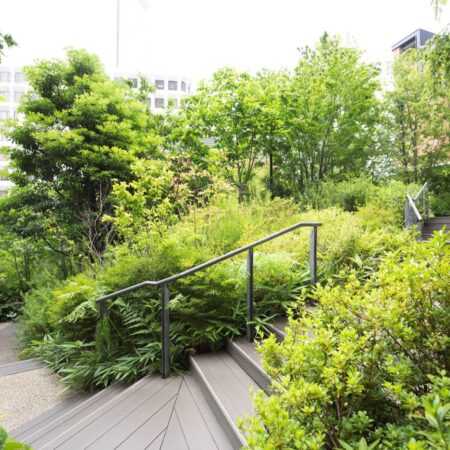 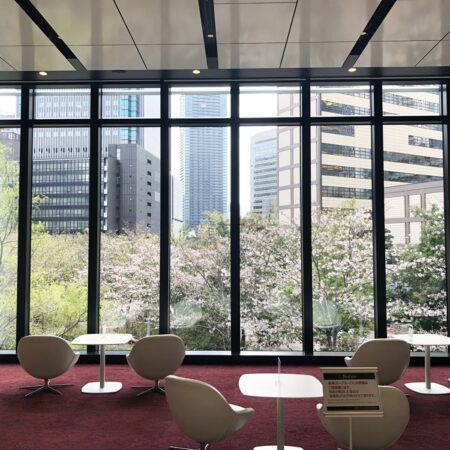 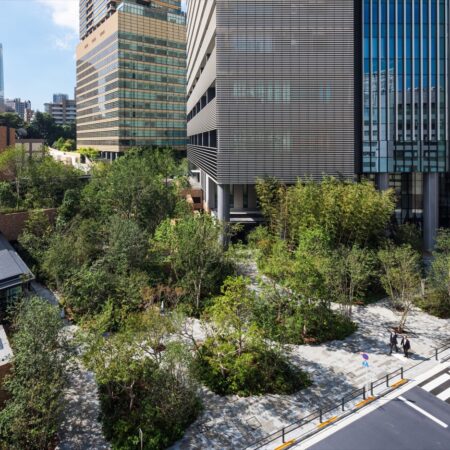 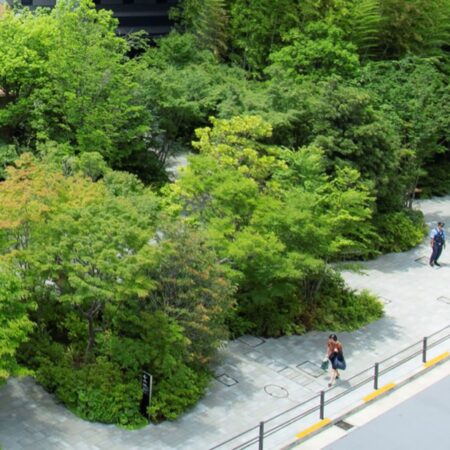 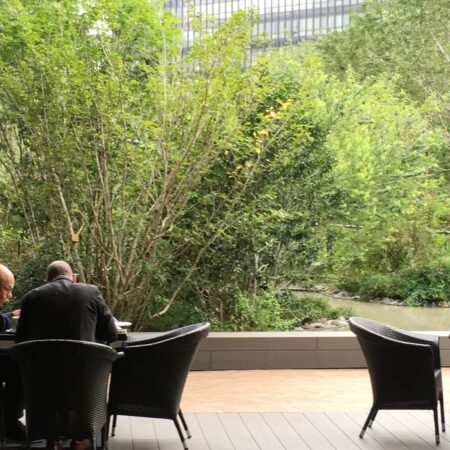 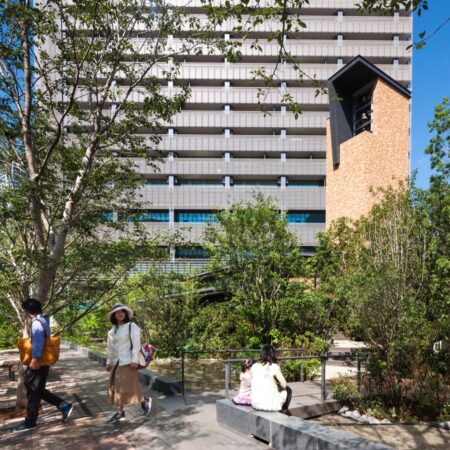 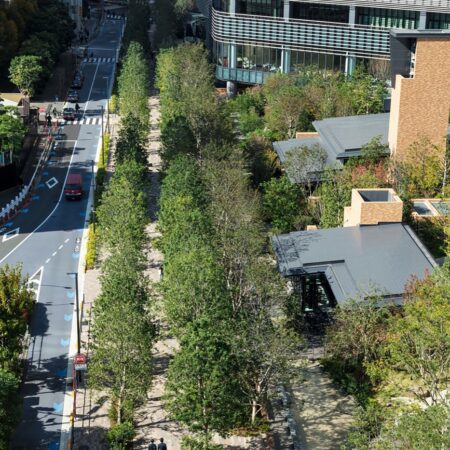 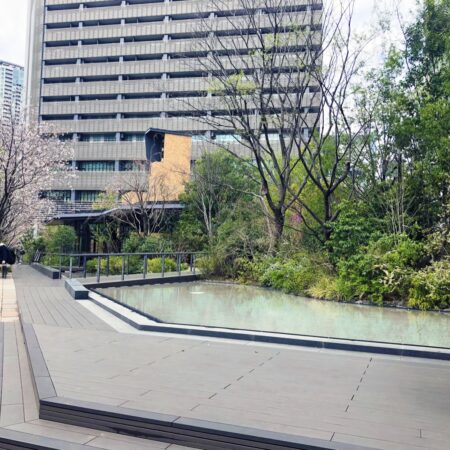 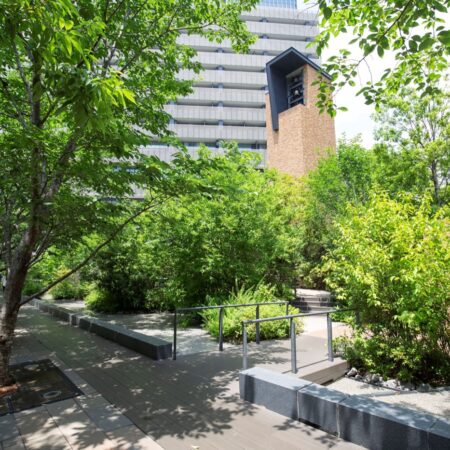 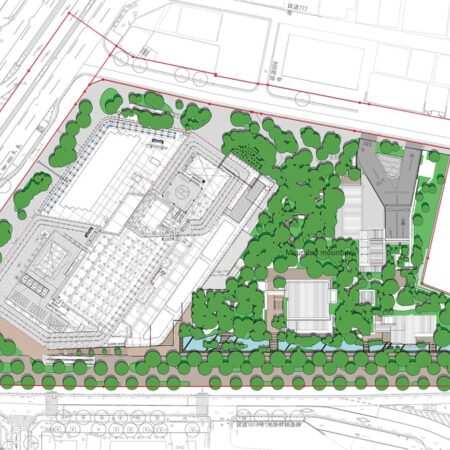 At the Edo period, the forest of Sanno Shrine was visible beyond the pond. Following with this history, we created a green mound on the other side of the waterscape to see the greenery through the water.

By deploying the skyscraper building to the west side of the site, the eastern half of the site was secured as a cohesive green space of about 5000 m2. This enabled to secure a large green area for the site.

We shared the goal to realize volume, impact, and comfort like natural green, immediately after planting.

In order to achieve this goal, we devised the followings: regarding trees selection, the planting design and methods.

From two years before planting, we examined each tree in the field in the suburbs and selected trees that have natural shape with freely growing branches. The largest one is a wig with a height of 13m.

We measured all of them, recorded their individuality, and examined planting patterns by combining photographs with 3D software.

A voluminous feeling was given by planting a combination of multiple wild shape trees.

The debranching for transportation was minimized and the trees’ shapes were kept as they were. The trees were planted in the most attractive direction while adjusting the individuality such as the inclination of the trees and the balance of the adjacent trees.

About 50 trees with a trunk circumference of 0.6m or more are planted so as to produce volume as a green tunnel.

We get administrative agreement to pave the adjacent public road using the same blocks as the site.

We save water resources.

In addition, a sufficient amount of tanks were installed on the water. As a result, the water naturally flows down from the water to the waterscape, reducing the number of times the pump pumps water and saving electricity.

Most of the green area are non-irrigated. Automatic irrigations are limited to some uses such as shallow parts of the planting base.

The soil is natural with high water retention capacity.

Komatsu stone and Nefugawa stone, the same kinds of stones which used for the Edo castle masonry, are used for garden path and landmark. These stones inherit the historical landscape.

We designed natural wooden bench units and combined them to follow curved green area and slopes.

The trees’ name tags were tied with a long string to sway in the wind. Each one is accompanied by a brief explanation to visitors such as the origin of the name of the trees.

We designed lighting equipment to hide them in the green space. A grass pattern is drawn on the glass of them.

We are building and maintaining a management system to guide high-density green with a future image close to nature.

Even now, the designers are growing the green landscape while designing the planting management.

With the idea of helping the growth of plants, we check frequently and take care not to cut down the branches too much. Trees grow by pruning the branches in harmony with the adjacent trees. Shrubs and groundcover plants will also be replanted as they grow up.

We have 50 sensors in the garden to monitor the temperature.

We also have a small vegetable garden and grow vegetables and herbs for neighbours.