Amarin Hotel Park in Rovinj, Croatia spread on a surface area of 10 hectares, is very complexly designed from a number of ensembles, that is, based on the concept of different zones. The project was made on the basis of urban parameters, and the Special Conditions for the Protection of Nature and the Environment, taking into account the geomorphological and typological characteristics of the area and the surrounding urban fabric. As part of the project, an inventory and valorisation of the existing dendro material were made, on the basis of which the landscape project fit significant units in the design concept. In other words, the features of an exceptional micro-Iocation of the plot – the picturesque western Istrian landscape – a unique combination of karst topography and the Mediterranean vegetation with the sea merged in landscape concept, along with the awareness of preserving the traditional values of the environment.

The organically, softly shaped volume of the Amarin Hotel with three arms-which from the bird’s eye view looks like a large frond or a sea creature-set the main topic of organic access to the spatial-Iandscape-scenery concept. The placement of the hotel on the plot defined two large parterres zones, the north and the south, of about 2,000 square of surface which, by pronounced graphism, evoke an amazing experience of space, both from the ground and from above. Landscape project achieved the main character of the green space by creating a network of park trails organic in structure. This communication tissue forms with the hotel a logical and indivisible whole. Within the network of paths, project particularly emphasized the blue path, a kind of a sign in the space, which, in a great arc, dynamically and boldly, circularly connects the green space with the hotel, enveloping its southern arm.

Project turns the thematic units in the space, which relate to the access road, the green entrance space in the north with a default roundabout, the northern parterre in front of the entrance to the hotel, the zone of the southern parterre, playgrounds, olive groves, the utilitarian garden in the southwest, the west zone with the swimming pools, the cape in the south with a network of walking trails through the indigenous maquis, with the communications west-east and east-west into the atmospheres in the concept of space.
These atmospheres change from the representative, official and the foreboding in the north, through the relaxing, country, amazing, playful, and relaxing again from the west and southwest, the authentic and astringent in the south, the meditative in the southeast to the sizzling and vibrant with entertainment facilities in the east. The northern parterre deconstructs the Istrian meadow with the associated Istrian rare and unusual plants, such as wormwood, spurge, acanthus, blue thistle, of restrained colouring in gray-blue-green and purple-black tones. The southern parterre constructs the idea of an aromatic Mediterranean garden (yarrow, lavender, sage, wild thyme, immortelle) vibrant colours. The main views are opened over the parterre areas: to the forest of Aleppo pine in the north, over the forest to the sea in the south. The playgrounds and lawns have modelled relief which follows an arcuate organic communication line in the space, and the pool zones in the west side have the spatial visual caesura of medium and high greenery, of markedly accentuated blue-violet shades of vegetation. The southwest zone introduces the topic of the orchard, of the fig, almond, pomegranate, loquat and strawberry tree as well as the conceptual spice garden in wooden boxes randomly placed in the lawn. An olive grove was also created to which the seventy-year-old olive trees, which had grown within the coverage zone of the project, were transplanted. More than 3,000 square meters of roof gardens were planted with different types of grass, low growing succulents, flowering plants that make compact, complex green fabrics observable from different vistas.

The landscape concept which was designed for the Amarin Hotel takes into account not only the characteristics of the Istrian landscape and the micro location, as well as the organizing the function in space, but also a complete synesthetic experience of tourists and visitors of all ages who stay in the landscape of the Amarin Hotel: from coloristic and chromotherapeutic to olfactory-relaxing that Mediterranean herbs, maquis, and plenty of planted coniferous species transfer to our senses. In its concept, the space given by the project is maximally used and dynamized with harmonious and complementary, but also contrasting surfaces and textures of plant and organic materials, where by creating controlled frames and by balancing all the elements, the vistas of high content-related and spatial value were achieved. 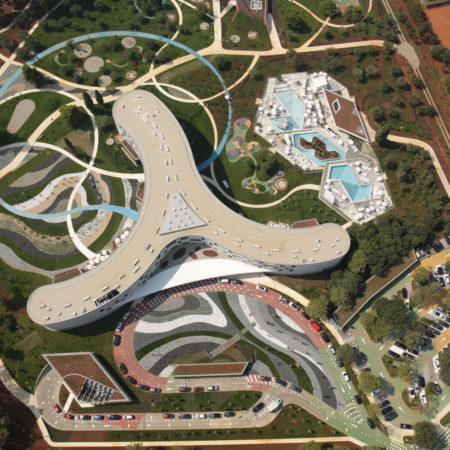 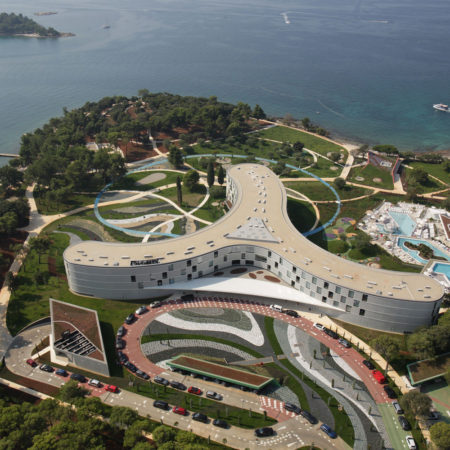 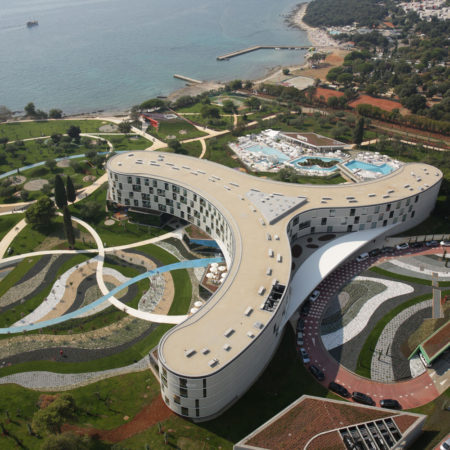 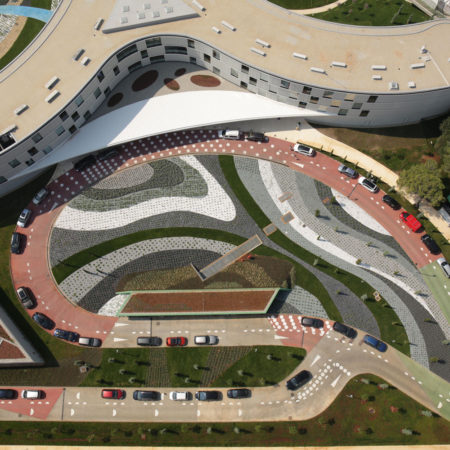 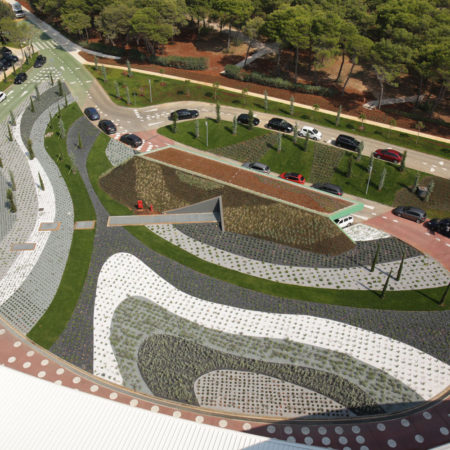 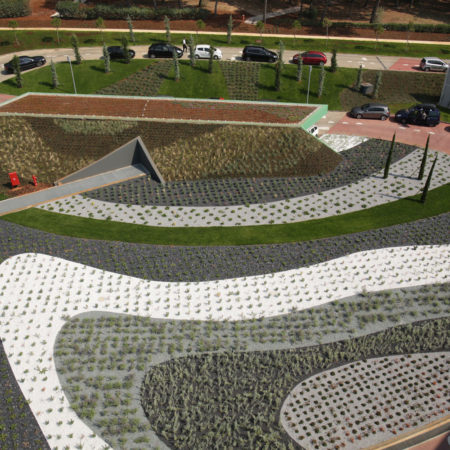 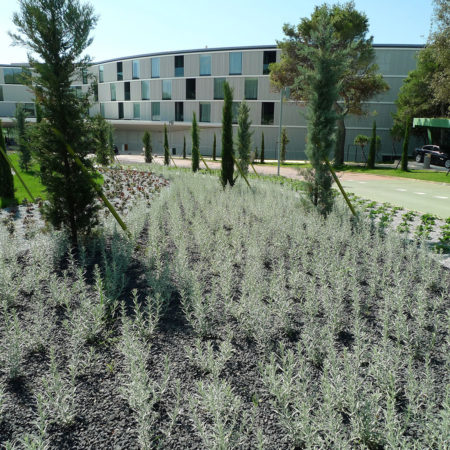 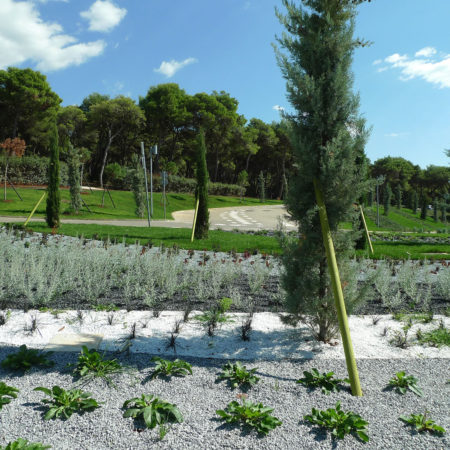 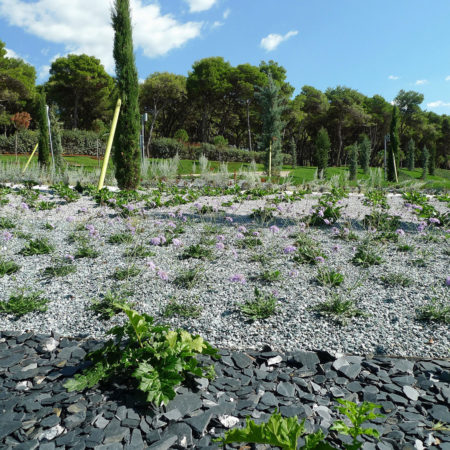 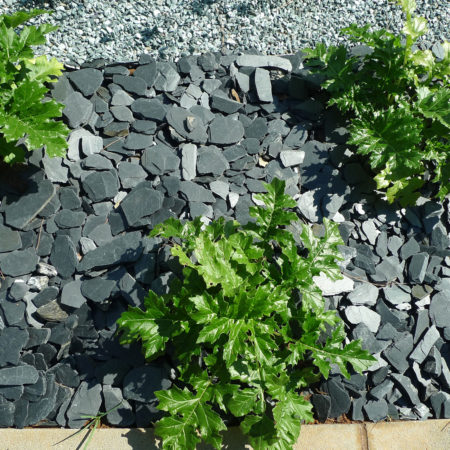 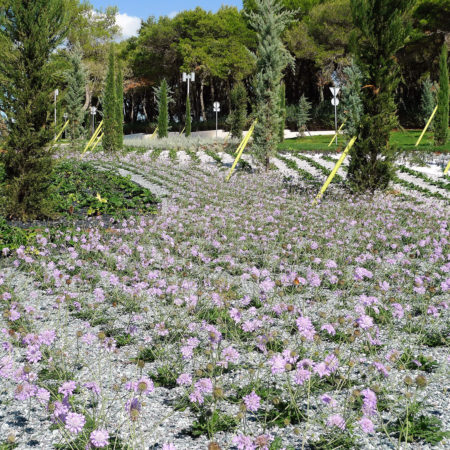 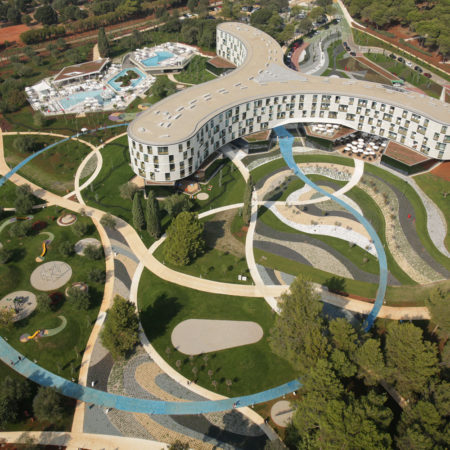 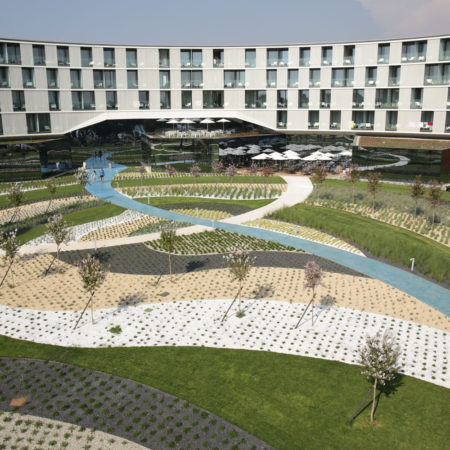 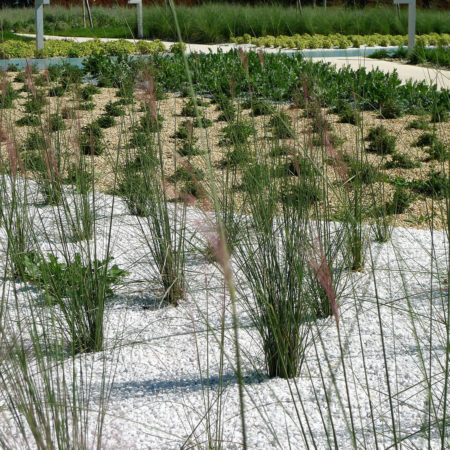 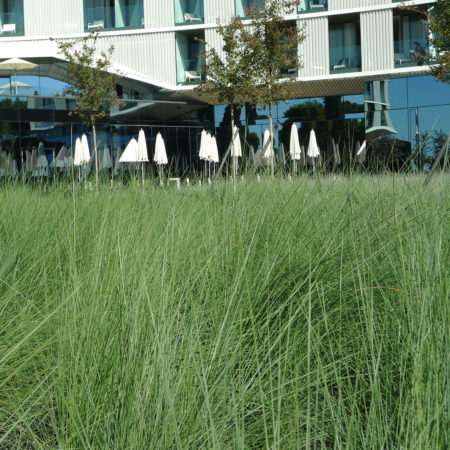 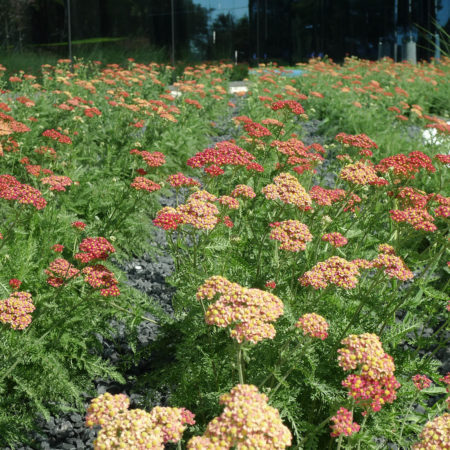 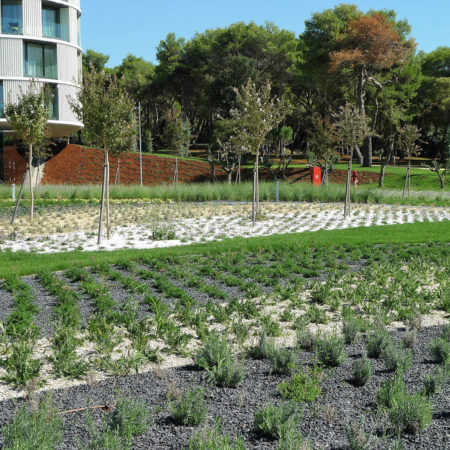 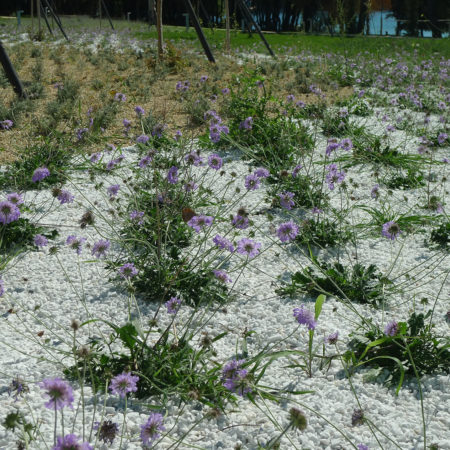 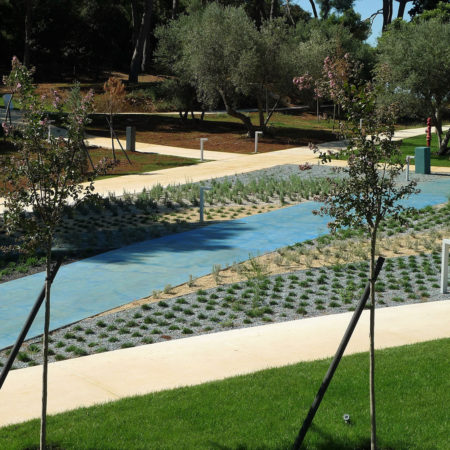 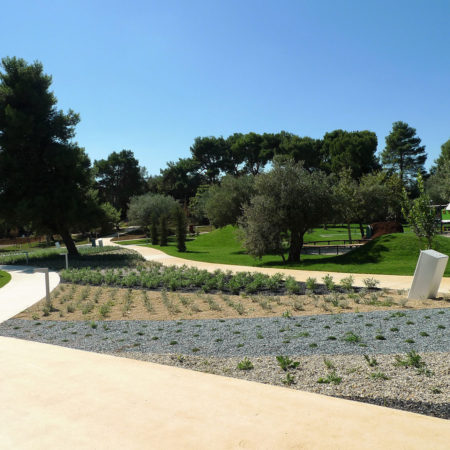 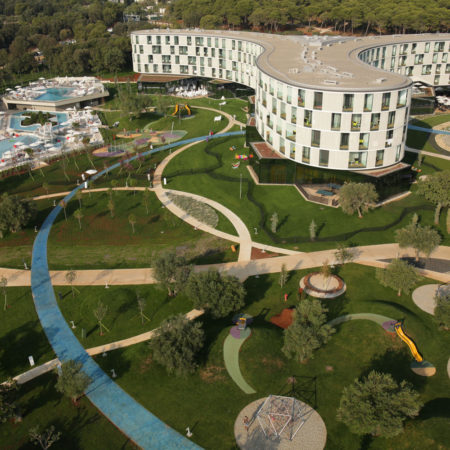 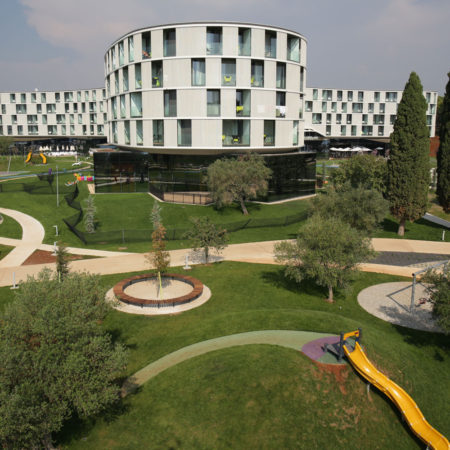 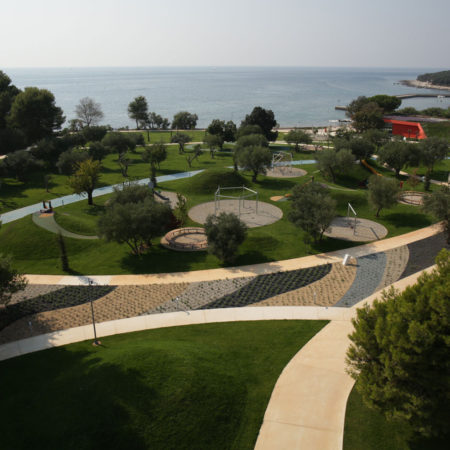 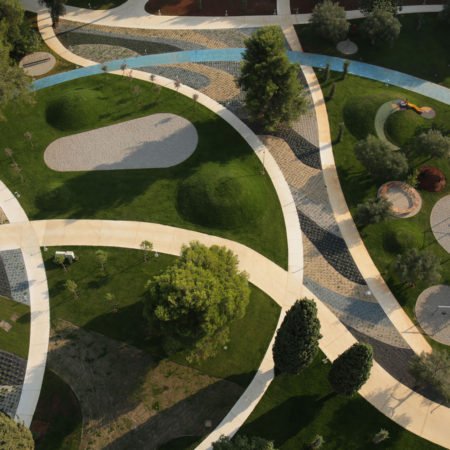 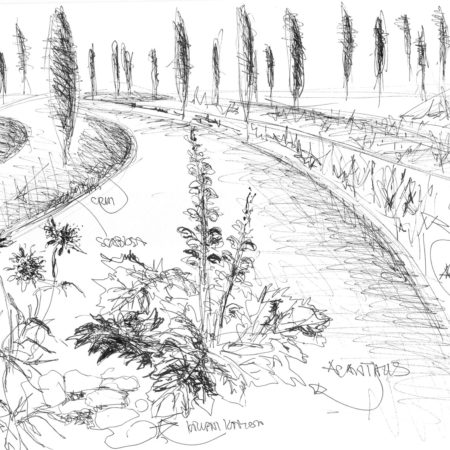 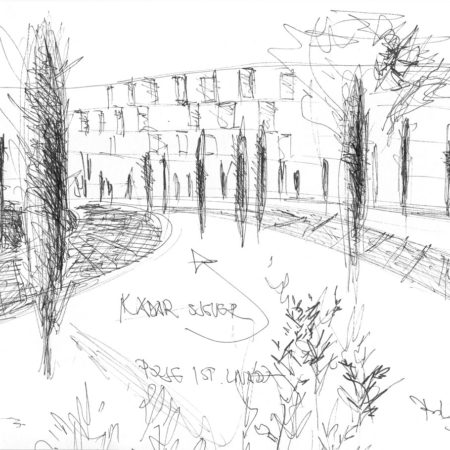