The Texas Blackland Prairies are a temperate grassland ecoregion located along a 300-mile swath between north and south Texas. Because its rich black soil is ideal for agriculture, untold hundreds of thousands of acres have been converted for that use. Less than 1% of the original, pristine prairies remain, including such sites as the Nature Conservancy’s 1,400-acre Clymer Meadow Preserve just northeast of the DFW Metroplex.

The existing site contained areas of prairie and development that had grown by accretion, and in its planning for an expanded workplace team, the client brought a new set of criteria to its building program which included a holistic view of collaboration, health, and wellness.  They wanted to create a campus and not a headquarters, shining a light on the beauty of the Texas landscape. The new 258-acre campus is a reordering of an existing set of buildings, with 1,850,000 SF of new amenity, work, and collaboration spaces. 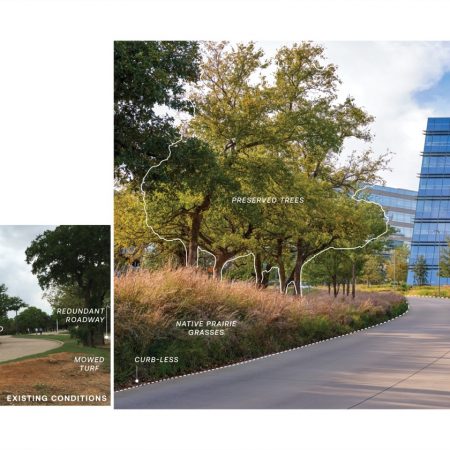 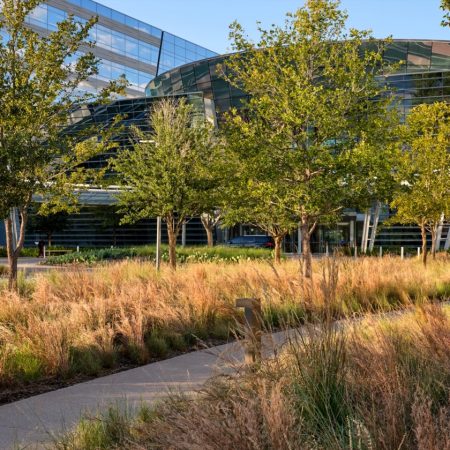 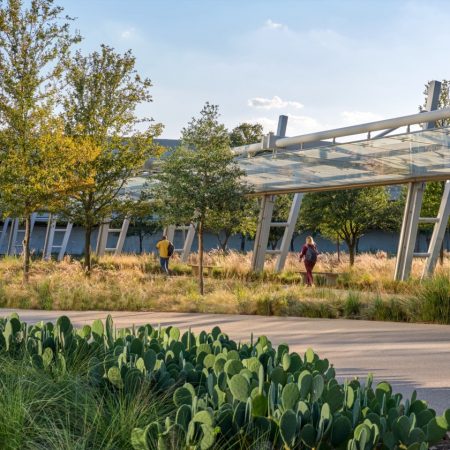 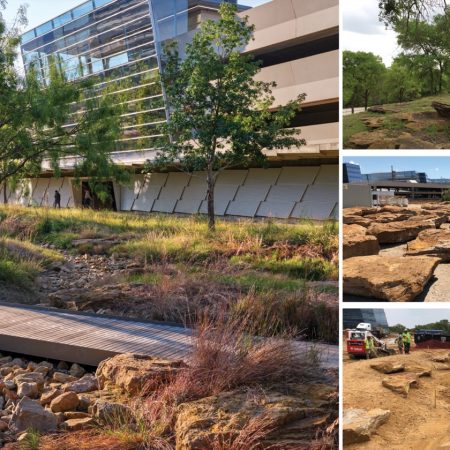 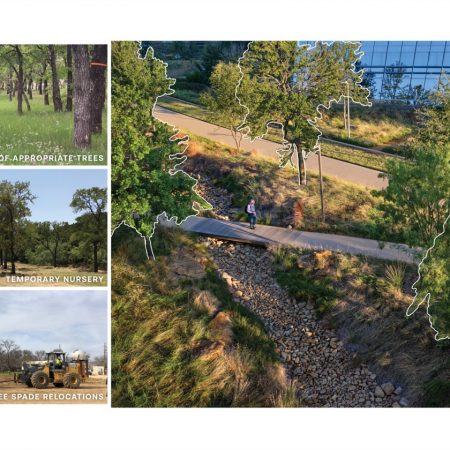 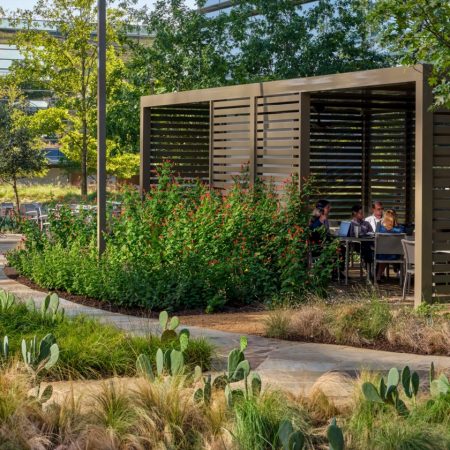 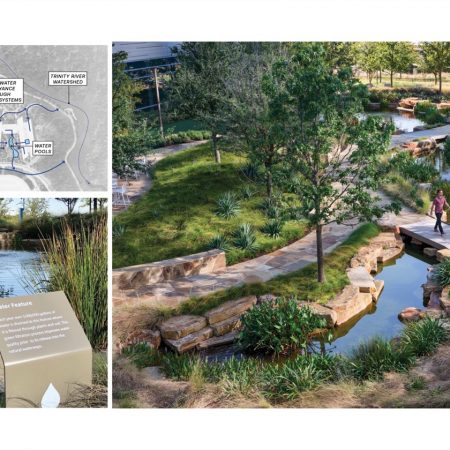 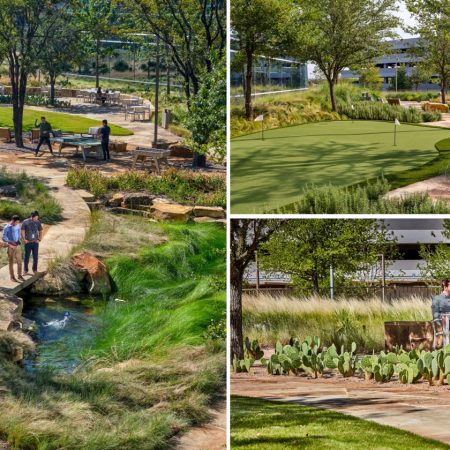 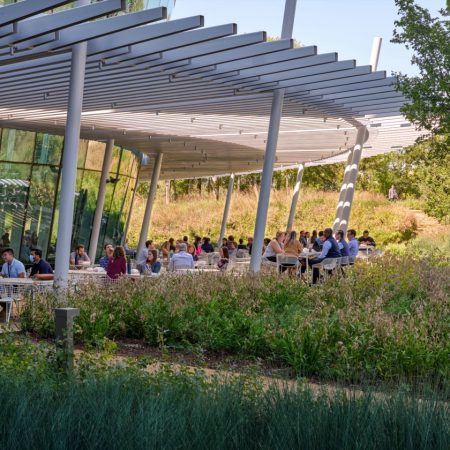 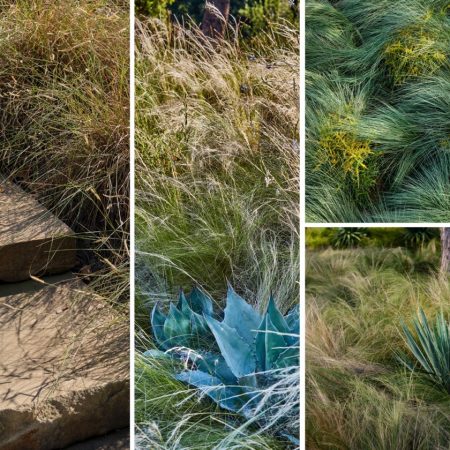 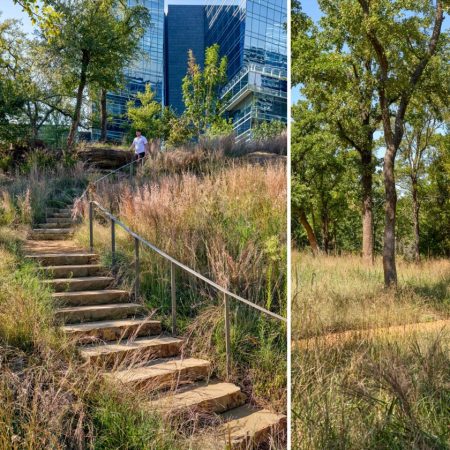 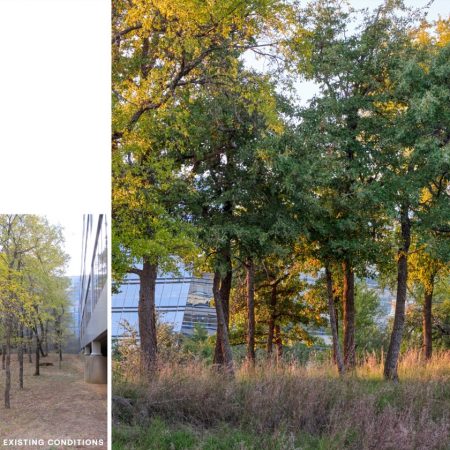 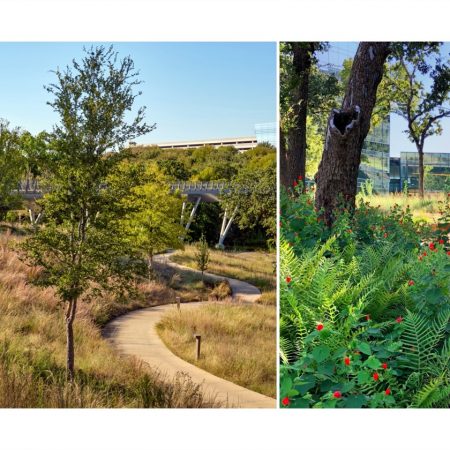 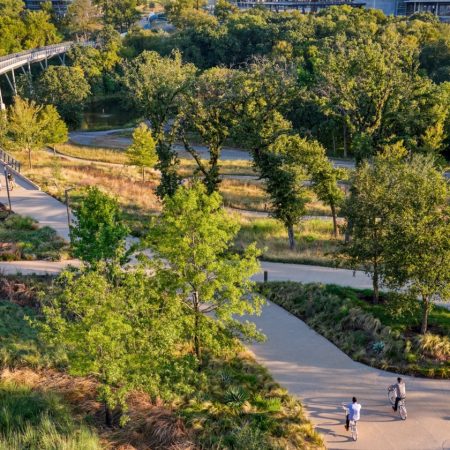 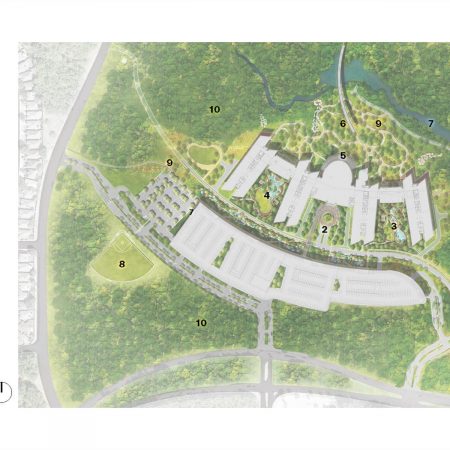 Recognizing its importance as a disappearing ecosystem, the landscape architect advocated for restoring as much as possible both for environmental and aesthetic objectives. The design premise stands in contrast to the typical suburban “office parks” – exquisitely manicured, high maintenance plant-and-flower infill between parking clusters, which generally bear little relevance to their place and time. The constant mowing, pruning, fertilizing and pesticide operations are both expensive and environmentally deleterious. In a departure from this office park idea, the native Texas land was an ideal backdrop to mediate between buildings and nature. It acts as the unifying element that brings people together to collaborate, not only restoring the health of the land but also bringing health and wellness benefits to the people.

Significant parts of the campus were deeply forested habitat. The new plan preserves these key characteristics with better-planned access and circulation. The landscape design includes 81 acres of amenity space, with active recreation areas, woodland trail systems, regional multi-use connection paths, and work-enabled courtyards. The configuration and features of the courtyards make four-season enjoyment of the outdoors possible, providing respite in the Texas summers while changing to autumn hues as the weather gets cooler.

Before construction began, the team identified specimen trees to be saved and preserved. A temporary nursery was set up on-site, where trees were protected during construction. Mature specimen trees were carefully knit back into the composition as scale elements closest to the buildings and along the arrival sequence. Similarly, the boulders that were uncovered during site preparation were moved to a staging area and placed back into the new composition of the landscape and building.

With the extreme Texas weather, rainwater treatment was critical. The landscape features a series of dry creeks, which show as natural planted vignettes in temperate weather and double as a natural filtration system that controls runoff in peak conditions. Water is also managed through permeable pavement and a connected roof drainage system.

Water features are also a key element in a resilient collection, detention and circulation loop. Ponds are designed as an organic ribbon, framed by native rocks, shrubs, trees, grasses and seating areas. Capturing rainfall and condensate in the roof drainage system enables water connection that is then deployed in a circulating detention pond.

With parking at the perimeters, a system of intra-campus transportation eases moving across the site. There are free bikes; electric mini-buses; and boardwalks, paths and bridges throughout make walking both healthy and convenient. There are putting greens, ping pong tables and other game features, fostering vibrant human interaction and beckoning employees outdoors.

Environmental sustainability is a logical result of the prairie renewal stance taken by the designers. Yearly 166,560 pounds of carbon monoxide are absorbed by new trees; paving on the property was reduced from 54% to 22%; 90 acres of existing woodlands are being preserved; 21 acres of parking lot were replaced with landscape; finally, 5,093 new trees were planted, and more than 50% of the site is planted with native/adaptive plants. The complex is a LEED Gold certified campus.

In the United States, suburbs offer some of the most compelling locations for environmental stewardship and restoring ancient habitats. This workplace campus carefully balances a humanistic approach that immerses and encourages people to connect with each other and with the beautiful setting, while at the same time restoring and replacing the fragile and disappearing Texas Blackland Prairies. 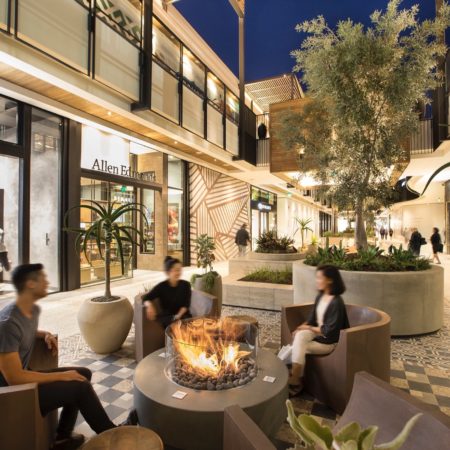 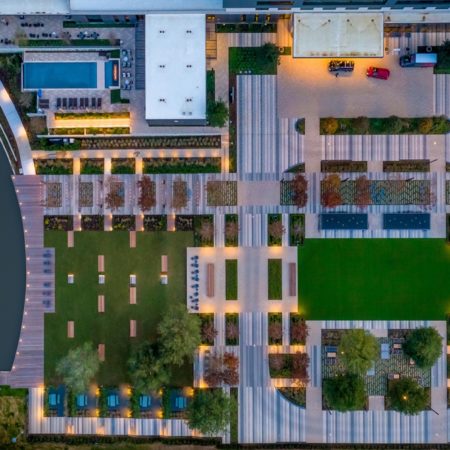 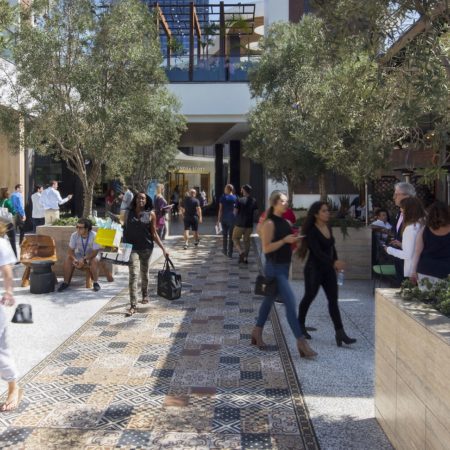