ANNABAU is an office planning projects with a high demand on design and on spatial solution issues. High-quality execution, compliance with budget and schedule as well as flexibility are important to the company. In addition to architecture projects in the private and public sectors ANNABAU designs gardens, parks, public squares and playgrounds. Extensive experience in energy planning and energy efficiency makes sustainability an integral part of the projects. 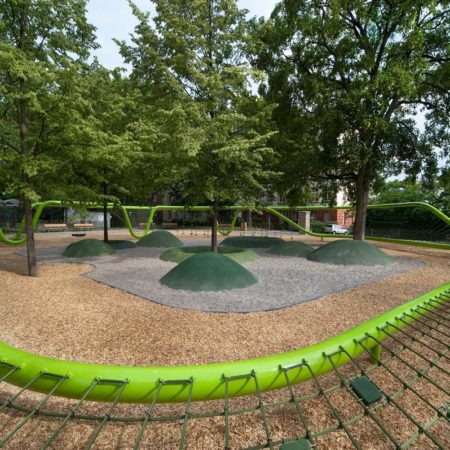 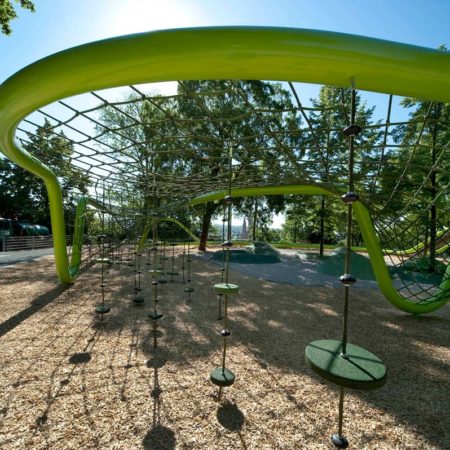 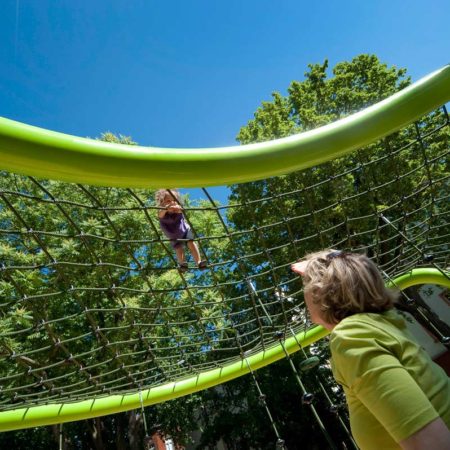 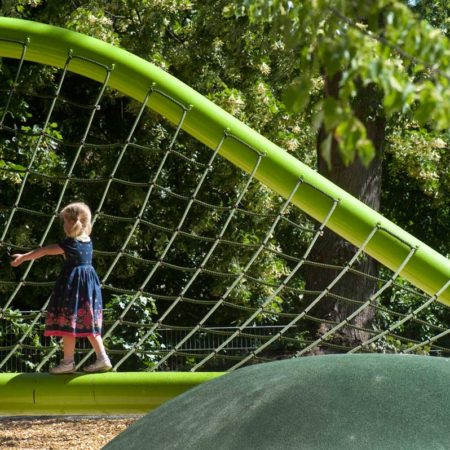 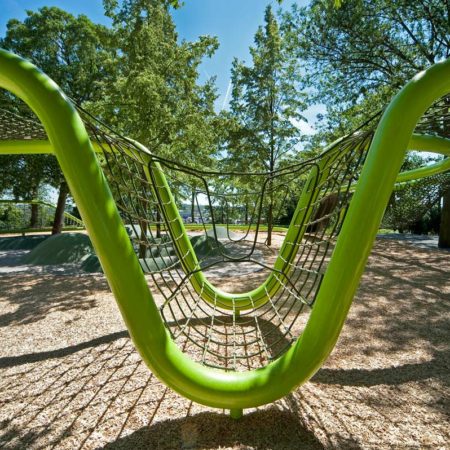 The retro-fitting of the “Schulberg” hill in Wiesbaden creates an extraordinary new public space whose outstanding architectural beauty, overlooking the city centre, is attracting people of all ages and ethnic backgrounds to meet and communicate through the action of play. The heart of the new public space is constituted by an artistically shaped playground consisting of a large spatial structure. Two green steel pipes wind and float in distance and height, sometimes cantilevering up to 23 metres. The pentagonal shape of the structure was derived from the historic shape of the city of Wiesbaden, while the dramatic swoops of the pipes refer to urban situations on the site. In between this structure a tensed climbing net creates a loop – a continuous sequence of gaming activities for children and teens. Within the loop there are six main stopovers for playing activities including bouncing membranes, a liane garden and an exhilarating downhill slide. 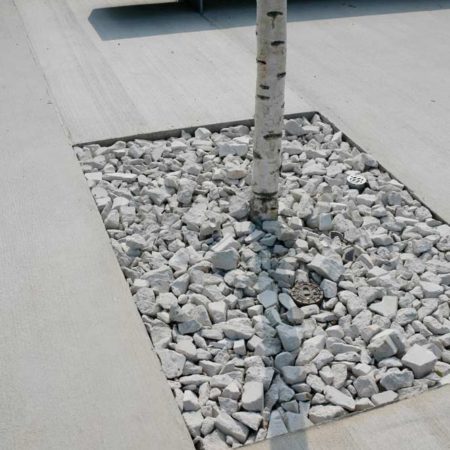 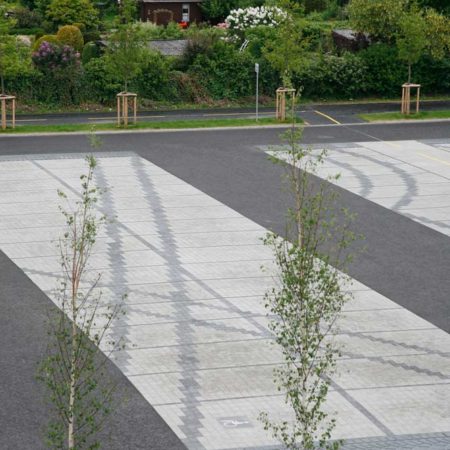 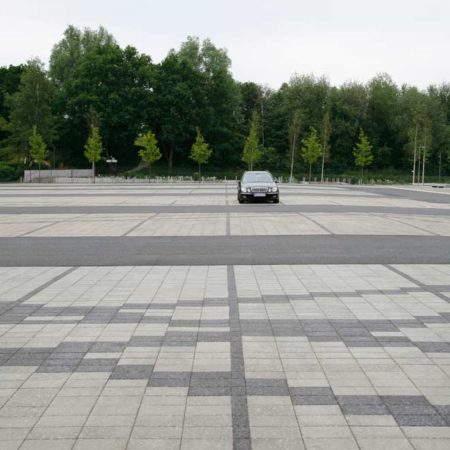 A former sand-lime brick factory, adjacent to the new Stadtpark Norderstedt (City Park Norderstedt), has been converted into the new „Kulturwerk Norderstedt“, accommodating a city theater and a local music school. Its landscaped environment, including entrance and a parking lot, was planned by the Berlin based architectural and landscape architectural office, ANNABAU. During the „Landesgartenschau“, the surroundings of the „Kulturwerk“ will temporarily function as a space for the horticultural show. The subsequent use will afterwards be determined by the new „Kulturwerk“.

A row of birch trees together with concrete benches along the building, create a division between pedestrians and driving spaces. The industrial character of the former factory is included in the embodiment of materials. On-site concrete, asphalt and self binding gravel are the main defining materials.
The aesthetic of traffic became vital in the design of the project layout: The parking spaces themselves are paved with conventional concrete road cobbles. Lines of darker paving stones run like tire tracks across the area. The playful materiality turns the empty parking lot into a scenic spot. 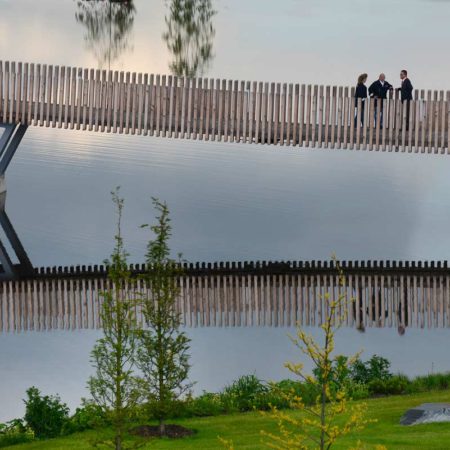 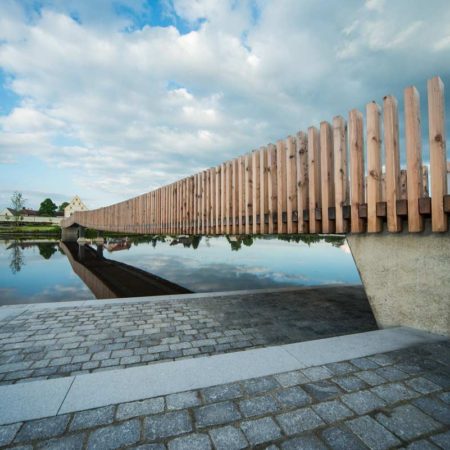 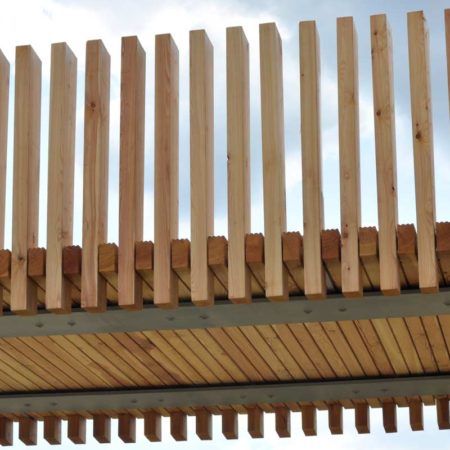 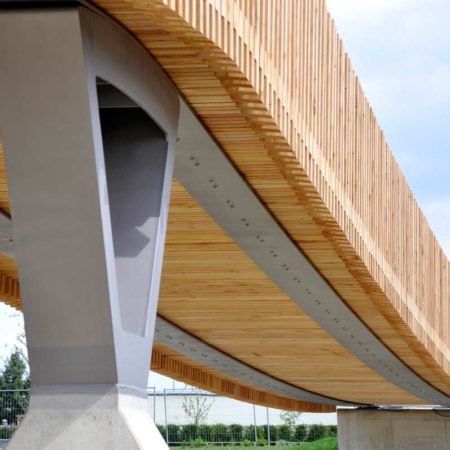 Summary
The design for the Tension Band Bridge was a cooperative competition entry between Berlin-based firm for architecture and landscape ANNABAU and Schüßler-Plan structural
engineers for the „Landesgartenschau Tirschenreuth 2013“ (Garden Festival Tirschenreuth 2013), and was selected for implementation. The sculptural bridge is destined for pedestrians and cyclists and spans its 85 meter length over the city pond.

Urban situation
The new bridge connects the centre of the old town of Tirschenreuth via the „Schels Areal“ with the former island monastry „Fischhofinsel“, the new quarter “Lohnsitz“ and the adjacent area for leisure and sports.

Architecture
The exposed wooden body of the bridge is closely connected to the historical meaning of wood in the city of Tirschenreuth, evident in the city`s name. Additionally, it refers to the local architecture, where untreated wood is often found in vernacular construction. 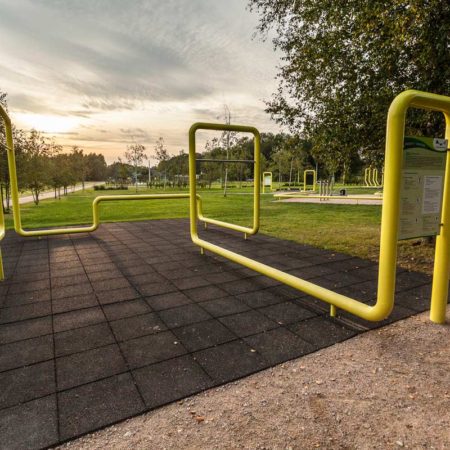 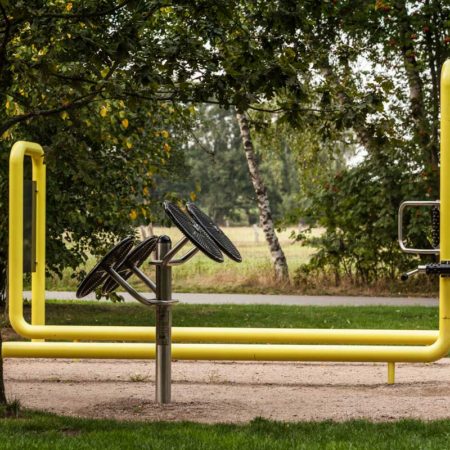 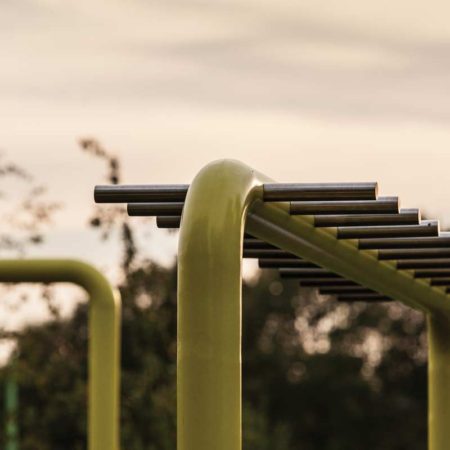 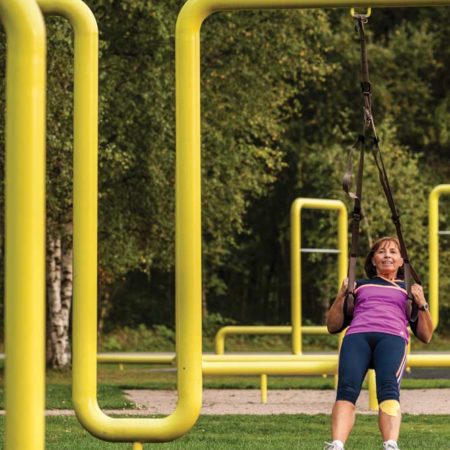 The Fitness Parcours uses the existing structure of the Norderstedt city park and is thus integrated into its general landscape development. The basic structure was created from an existing exhibition grounds of a regional horticultural show. Small square formations alongside a meandering trail form an ideal setting for fitness activities – the Fitness Parcours. Using the existing structure provided a low cost design that continues the park´s landscape development as well as activity for its visitors. A main design aim was to provide a varied fitness program. Research of similar activities demonstrated that the use of fitness devices is strongly influenced by both the location and design.

It was therefore a concious decision to relate the design to each individual fitness solution, and to integrate these into one comprehensive, strong design idea. The design: a bright yellow steel pipe wraps itself around the various trail squares, shaping each activity of fitness that is offered. The pipe acts uniformly, demonstrating a surprising liveliness and versatility: it both facilitates and attracts, offering many surprising and unpredictable uses. The user can be infinitely inventive when using the tube for strechting, muscle training, movement, or rest. 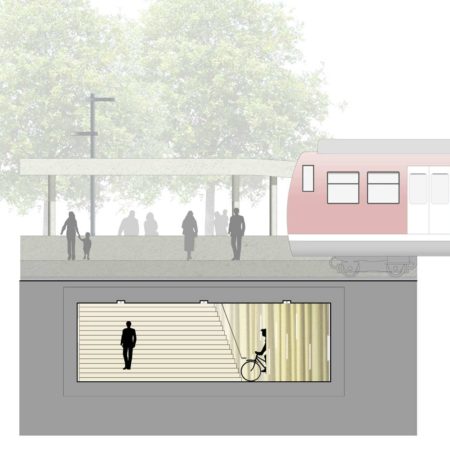 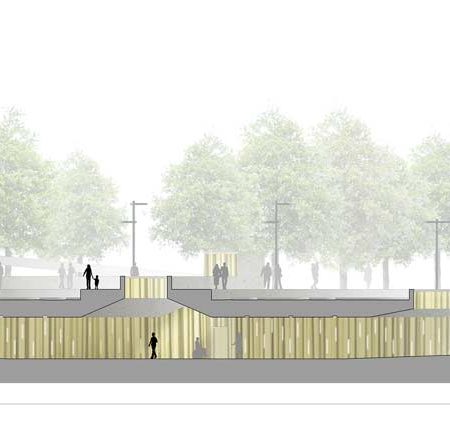 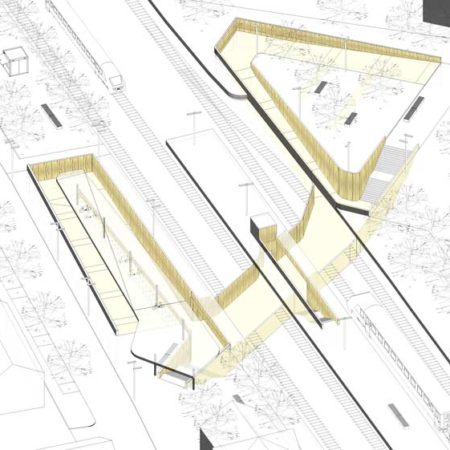 The station surroundings have to be rearranged by the new design of the open spaces and an accessible underpass. The new underpass creates a natural connection between the city park and the station area.
Uniform road surfaces, generous areas for pedestrians, urban plantings like a tree grove, street trees and accompanying elegant urban furniture dominate the new character of the station environment. As a matter of course, the main street and the station surroundings connect to a representative urban space. The Landgrabenweg is landscaped as a continuation of the city park to the main road. Groups of trees, park islands and the design of traffic areas as “Shared Space” create a tangible link between green city park and the main road east of the railroad tracks. 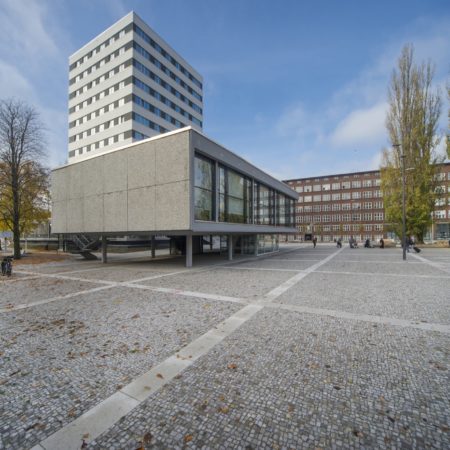