The phenomenon of the outwearing and depositing of soil layers in the context of urban structural change is known as city erosion. One of the most famous example of this is found in the city of Rome, the city layers consist of foundations from different areas and thus report of the folding of manmade history. Based on realized and ongoing projects, competitions and research projects, antón&ghiggi investigate processes of town erosion, which illustrate the anthropogenic folds in the landscape. Afforestation of degraded soils in Bogota in Colombia and in the outskirts of Dakar in Senegal, soil reallocation as a concept for an urban park in Bavaria, reuse of waste building materials in Pfingstweidpark Zürich, the use of the creative power of rain water in a housing estate in Küsnacht near Zürich, are some examples of antón&ghiggi’s work.

Behind each erosion process hides an opportunity to read landscape anew and transform its main characteristics. The history and nature of each place are essential premises of its transformation. The changing and often unpredictable developments of nature, in small and large scale, both in urban and natural context, represent the most exciting challenges in term of design and implementation. A careful study of the history and current condition of a site, enables to highlight specific landscape features, in relation to cultural values. This can be achieved by engaging natural processes like erosion, human interventions like reforestation, by the selection of certain materials and the „collaboration“ with time. Understood as dialogue between aesthetics and ethics, the projects aim to be not „only beautiful“ but environmentally sustainable. The interest is not on nature as an image but about landscape spaces in all their dimensions, including society, history as well as natural processes.

The office staff is composed of professionals from different disciplines: landscape architects, architects, biologists, industrial and urban designers. Additionally, the office collaborates with artists, scientific experts and engineers, as well as architects and sociologists in diverse projects reshaping the boundaries of the profession. Projects such as: „La Macchina meravigliosa“, art installation built for the temporary exhibition “Lausanne Jardin” with the artist Corina Rüegg; Infrastructures as pedestrian bridges connecting Dreispitz-Brüglinger in Basel, or connecting both swiss and german riversides in Rheinfelden with Conzett Bronzini engineers are some of the examples. With Pilar García Abril and dentrochronologist Fritz Schweingruber, the office is engaged in an ongoing research project called „Microforest“. Additionally, the office is part of current swiss discussion about building consolidation within several urban developments.

In parallel to their practice as landscape architects C.Antón and D.Ghiggi worked as research assistants and lecturers at the ETH Zurich, Chair of Günther Vogt. This collaborative work resulted in the book “Cultivating the Urban Jungle“, published by Lars Müller Publishers in 2010. Currently teaching at Lucerne University of Applied Science and Art are also involved in research collaborations with the School of Architecture in Seville, Spain. They are taking part as jury members in several competitions in Switzerland.

With this multi-layered and multi-disciplinary approach antón&ghiggi question the boundaries of landscape architecture today, aiming for innovative answers and solutions. 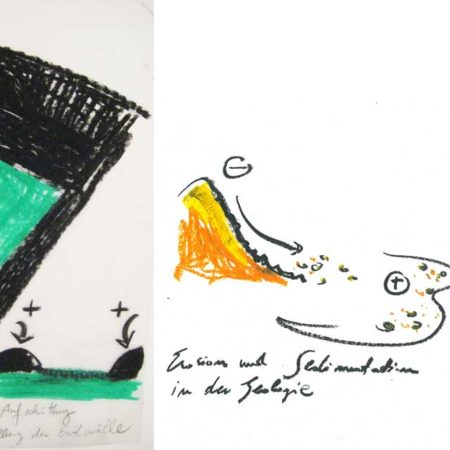 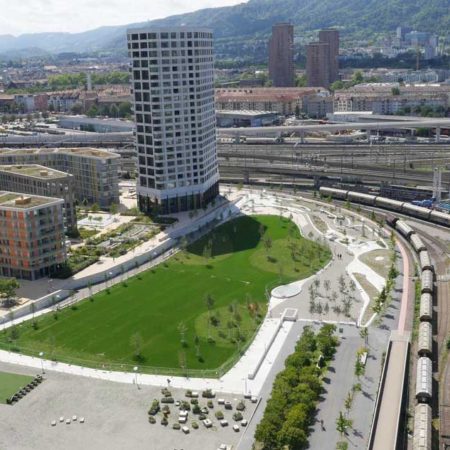 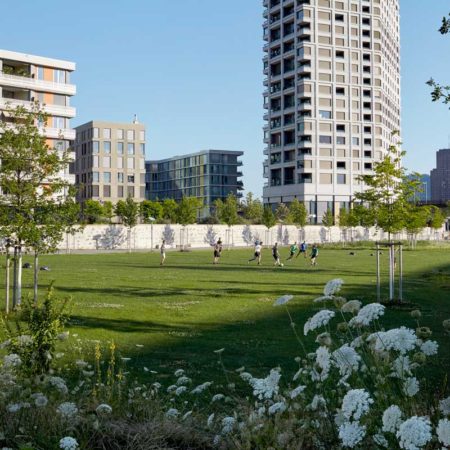 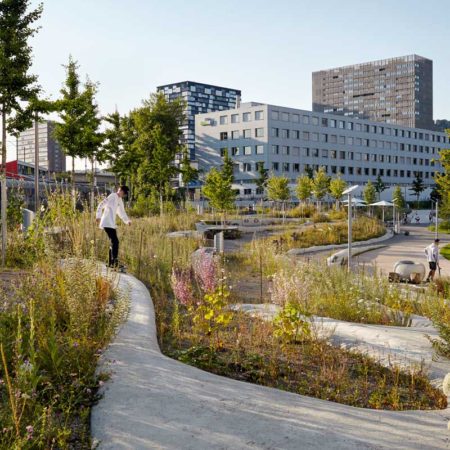 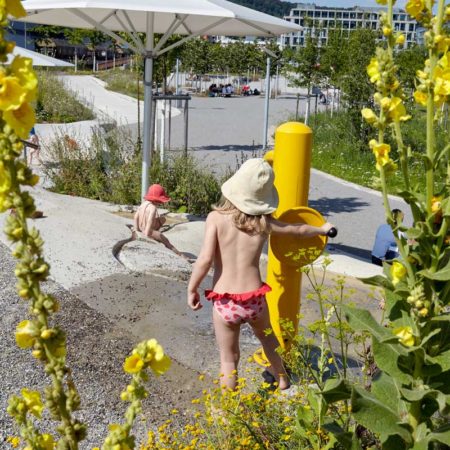 In 2009 an international open competition for a park was held for one of the few free lots in a central development area in Zurich. The 1,5 ha site is located in a former industrial district, between railway tracks and the Limmat River. While the areas surrounding the site had been artificially raised by 3m during industrialisation, the level of the former Pfingst-weide (Pentecost pasture) remained on lower level. This topographic feature became a main characteristic of the park, conceived as “sunken garden”. The heart of the park is inspired by the mixed oak forest pasture which remained in use until modern times for shepherds to feed their cattle at Pentecost. In contrast, the modulated edges are articulated through retaining walls, terraced embankments and stairs, integrating grills, swings, slides and water features: A “wild” frame with rough character, a changing space where little is defined.

In the context of Zurich’s intensive urban transformation, the theme of city erosion and the idea of a closed material circle, where materials could be reused on site was implemented in the construction process, exploring its aesthetic potentials. For example, a new interpretation of concrete was tested on a 200m long wall by embedding pieces of old fundaments into the shuttering. Additionally, existing substrate from demolished roofs has been attached to the wall to explore the ecologic potentials of material reuse. 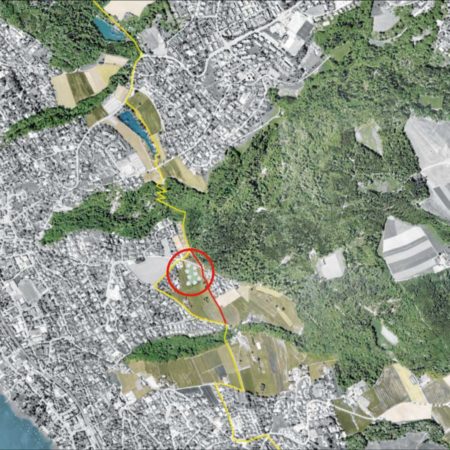 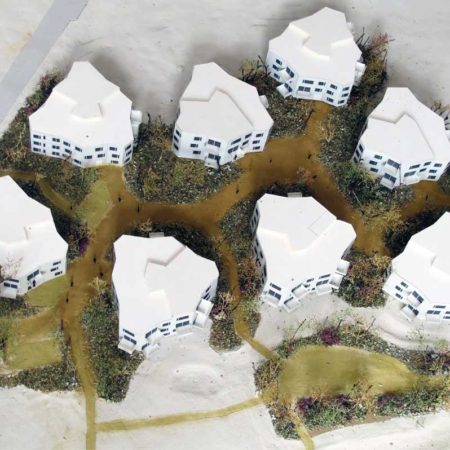 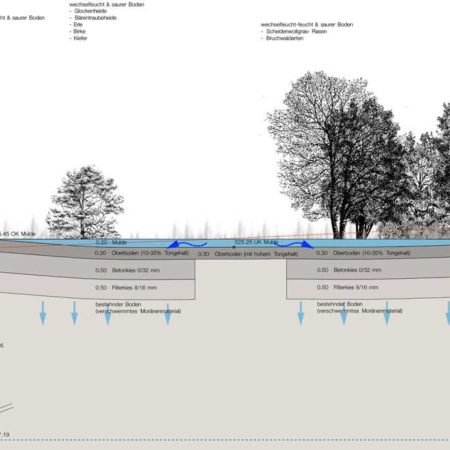 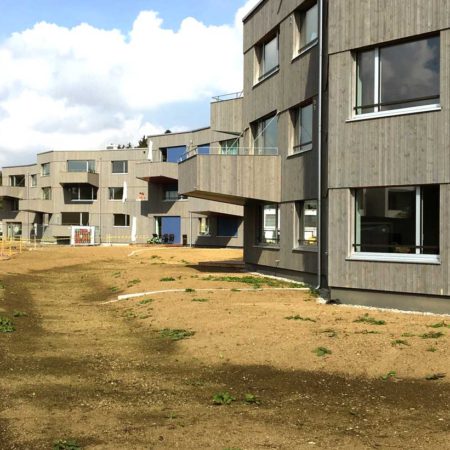 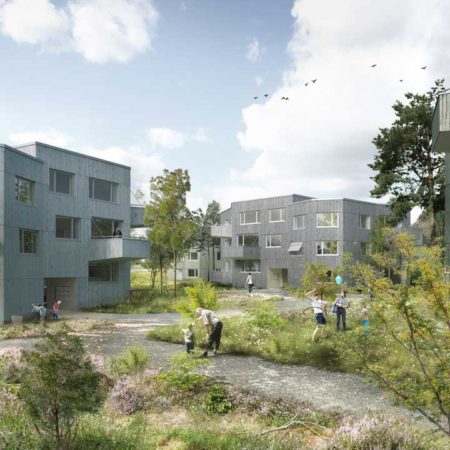 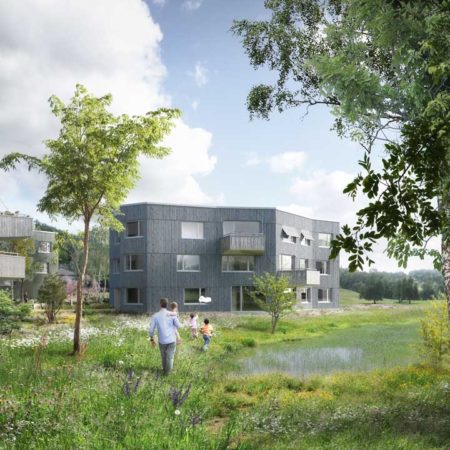 The 2 ha area of the Hüttengraben housing development is marked by its attractive location in a fluid spatial landscape situated on the outer edge of Küsnacht, on the eastern shore of Lake of Zürich.

The geology of the area is characterized by topographical formations resulting from the Linth Glacier, where clay sediments from glacial times are to be seen in form of marshy hollows and ponds. It can be assumed that Hüttengraben was once a moor too, prior to the melioration performed for agriculture. Several floodings in the past prevented the neighbors about water risks on site.

The project for the new development incorporates a remembrance of the moor landscape and asserts itself into the fluid landscape of the Allmend as a “Moor Island,” imprinting the space with character and identity. Eight loosely distributed building structures lie in the artificially constructed moor landscape like stones creating an intrinsically exciting exterior space with sparse floodplain vegetation.

A gentle modulation of the topography, combined with concrete water channels lead rain water from roofs and slopes into ponds and draining areas. Soil and vegetation follow the same principles generating an atmospheric environment and reconciling the neighborhood with the site. 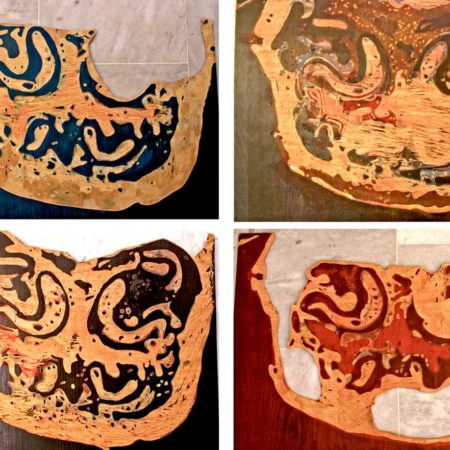 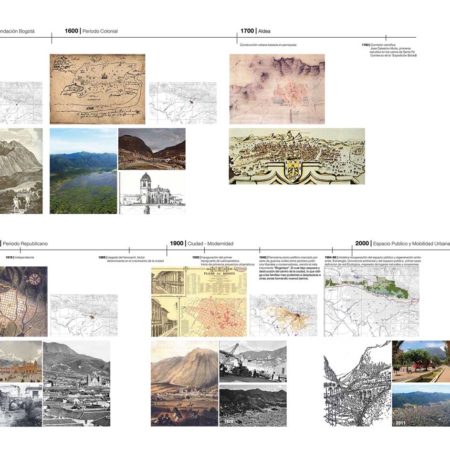 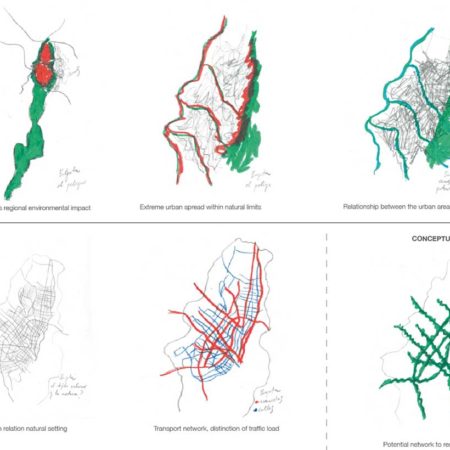 “Microforest” is a multi-disciplinary research project, inspired by the linkage between the analysis of patterns of tree rings, commonly known as dendrochronology, and their visible interpretation in the landscape. Whereby every tree becomes a “living archive“. The new interpretation of those wood patterns, those „living books“, trough artworks evoke a contemporary reading of the site, being traduced in targeted reforestations.

Beside the ecological aspects of trees the project focuses on the cultural meaning of trees in different countries. With the help of trees, sites can be read differently and reinterpreted.

The first case study (currently in development) takes place in Bogota, where urban growth has depleted a vast extension of representative forests. This situation challenged the project to find new opportunities for urban reforestation and public space enhancement. After mapping indigenous trees with a special symbolic meaning for the local population, the species of trees for reforestation were chosen, reestablishing the connection from los Cerros Orientates with the river Bogota, but above all reestablishing the linkage between men and the history of the site. 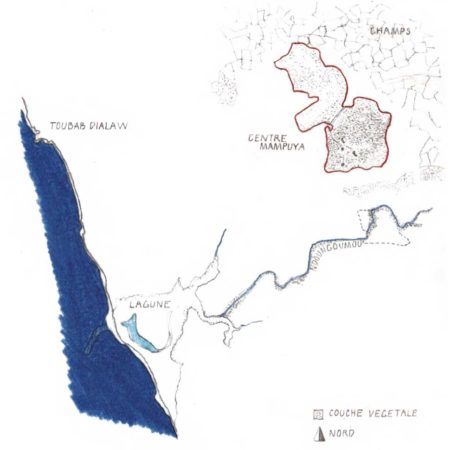 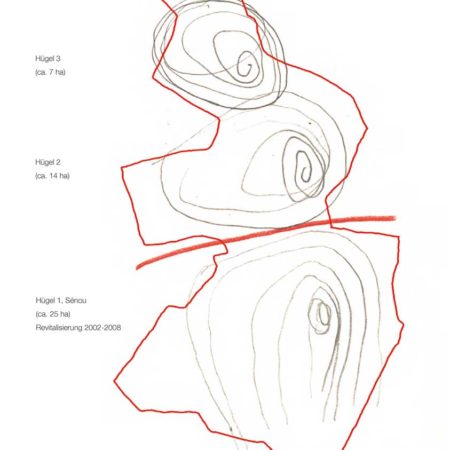 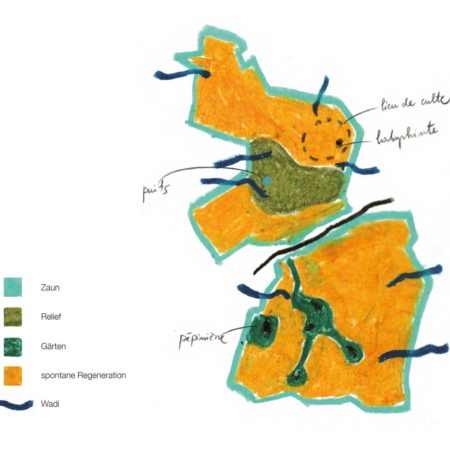 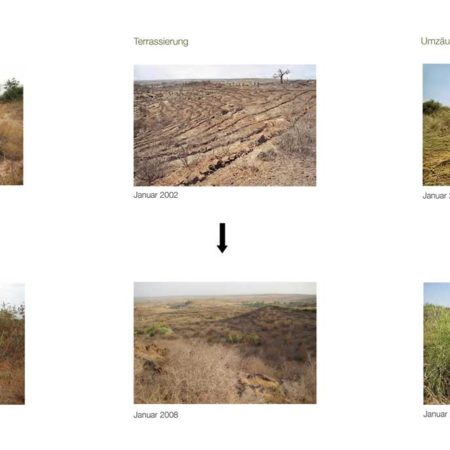 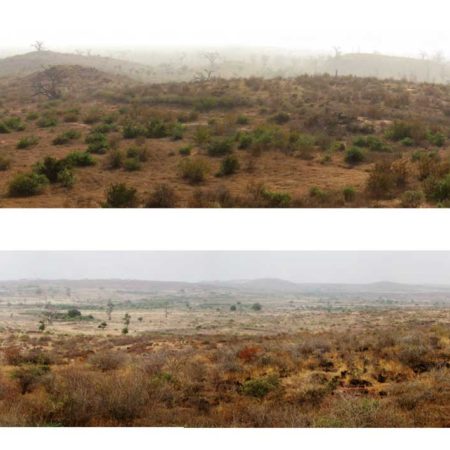 The Mampuya Centre is located in a transitional dry zone in Senegal. Over the past few decades, this region has become exposed to the phenomenon of increasing desertification: a phenomenon which is tied to fragile socio-economic and ecological contexts. For eight years, the Mampuya Centre has attempted to establish itself as a basis for sustainable development in this zone. In collaboration with the local population, efforts for ecological revitalization, cultural exchange, and social and economic development are being encouraged. The main body of terrain work around the centre itself has previously been realized in the form of a hill near Toubab Dilaw, a former fishing village on the west coast of Senegal approximately 60 km south of the capital city of Dakar. In 2008, the Centre Mampuya was extended onto two neighboring hills.

The goal of Project Sénou is to guarantee the continuity of the ecological project, in progress since 2002, and to accelerate reforestation. To this end, a new scenario for the protection of natural resources was developed for the entire site. The project’s central theme is the use of the hill as a botanical refuge for local plant species. An assessment of the existing topographic and herbal conditions was executed in January, 2008 on-site at the Centre Mampuya. The Project achieved to be an ecological and cultural example for the Region. 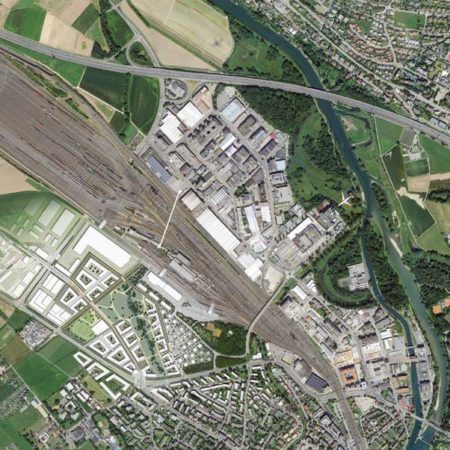 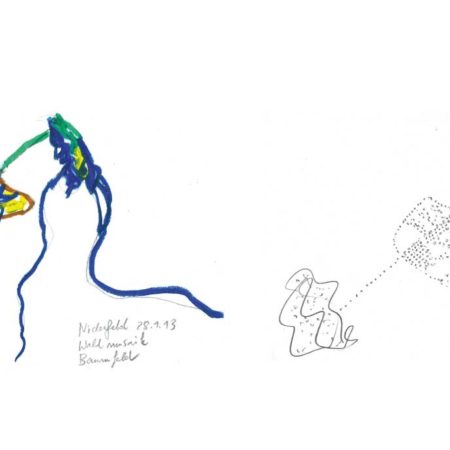 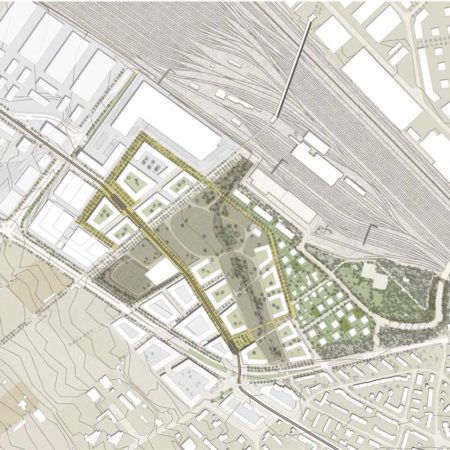 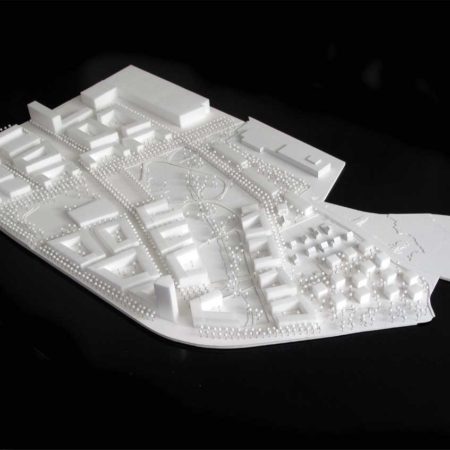 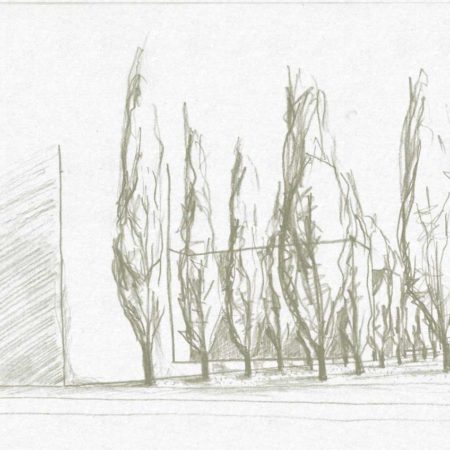 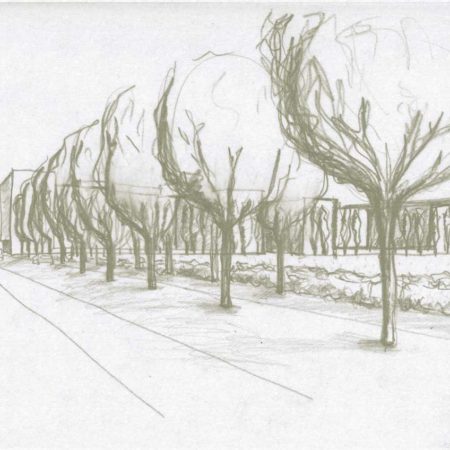 Niederfeld is a large area of approximately 40 ha located in Dietikon, one of the last remaining large undeveloped areas in the fast growing metropolitan area of Zürich. This study explores planning strategies for future urban development and a central and generous green space of about 8 ha. The idea is to create a high-quality urban mixed-use neighborhood along the newly planned rail tracks.

The site is characterized by large agricultural fields, topography lower as the surrounded areas, allowing scenic views to the nearby wooded hills. The water stream Teischlibach, running at a lower level through the central space, creates a valuable green axis, being the backbone of the new park.

The concept is based on connecting the site with the surrounding valley-landscape and the existing mosaic-like tree structure from the wooded hills. A tree field planted in different rhythms unifies the differentiated neighborhoods. A subtile dialogue among building and tree densities characterises the sites. To increase the connection to the surrounding landscape the project evokes some of the unique and beautiful forest mosaic from the nearby forest Rörimoos in Heitersberg, where the Teischlibach water stream springs. The circulation is reinforced through an internal ‘Ring’ connecting the three development areas.