The arch bridge project of Puçol (Valencia) solves the barrier effect problem caused by the existing ravine that divides the town in two parts. The project connects the two banks of the river, in the extreme south of Puçol, on the border with the countryside. It is a necessary connection to facilitate the daily pedestrian routes of the inhabitants since on both sides exist residential buildings and facilities. In addition, the bridge allows the decongestion of vehicles from the highway to the industrial estate that no longer have to go through the centre of the town.

Due to its location, on the edge between the urban area and the countryside, the design meets the basic requirements of any type of structure (functionality, resistance and stability) and manages to provide benefit to the area where it is located, always keeping in mind the integration into the landscape and the economic factor. 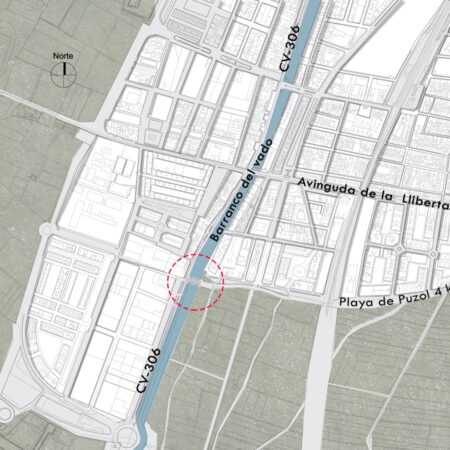 The bridge goes beyond its basic utility as a route to become a central element of Puçol’s urban growth, transforming and activating urban dynamics both at local and territorial level.

It is evident that the design and construction of the bridge improves pedestrian, bicycle and vehicle routes, however, the project aims to become a kind of “source of urbanity” generating projects in its environment capable of transcending at different scales.

In this sense, one of the project executed thanks to the construction of the bridge has been the adaptation and urbanization of the immediate surroundings. In addition, next to the bridge, it has been carried out the design and construction of a park that manages to connect the language of the countryside with that of the urban area. This park is conceived as a “walkable orchard” located on the edge of the town that allows great views and visuals for pedestrians and users. Local species have been used which, in addition to requiring little water supply, allow visual continuity and better landscape integration.

The project will also allow different improvements in metropolitan connections such as the conditioning with the Xurra greenway that connects the Puçol with the city of Valencia and the Ojos Negros Greenway, the conditioning of the dry riverbed as a pedestrian promenade, or the improvement of the sidewalks and their connection with the ravine on both banks.

One of the main values of the project lies in achieving, through a very simple mechanism of union between the two banks, activate and unleash a series of projects and urban actions around it with the aim of improving the city, its image and the connection with the rural environment.

The main goal of the project consists of creating a new structure, simple and integrated into the landscape. This is a bowstring bridge, close to the countryside, which cross over a ravine. For this reason, design dimensions are adapted to the morphology of the place. The bridge span is 30m long and arches are 8m high. By this way, a very light structure is achieved, keeping modern proportions according to current architectural patterns.

The aesthetic principle of the design remains in the intuitive understanding about how the structure works. For each side of the bridge deck, two arches are used. The inner one is vertical and supports vertical loads from self-weight and live loads, i.e. vehicles and pedestrians. The outer one leans slightly toward the vertical arch and provides lateral stability. The optimal behavior of these elements is achieved by matching both arches on top with a very thin steel membrane. The outcome is a very light and singular structure.

The paint on the bridge is light gray and contains mica that reflects the light from the sky differently at each moment of the day. This finish is also a sincere reference to the materiality of steel.

The night lighting aims to create a pleasant environment for the pedestrian while offering a new image of the bridge. The membrane reflects and spreads indirect light on pedestrian and cycling paths.

The rest of the finishing: floors, railings or fenders, are simple elements prioritizing durability and seeking details that could allow a close observation of the bridge. This way the bridge presents a tactile quality that we believe is necessary in an urban environment.

This new structure is essentially a new access to town. It also makes the connection between the countryside and Puçol easier by other alternative ways, apart from car driving, like biking or walking. This new bridge is a fundamental element for the daily routine of Puçol, not just as a transport infrastructure, but also as a unique visual landmark.
Architecture offices involved in the design (if any): FVAI – Francisco Valiente