What is the “Architecturniy desant” (Architectural landing team)?
The team of “Architecturniy desant” is a group of like-minded architects, whose aim is to return social orientation to the architectural profession. It does not matter how many people live in the town, where we organize parks and recreational development – a million or three thousand – we always do equally high-quality public space for people.
Why “desant” (landing team)?
The team name weren’t chosen at random – it completely describes our approach in the design of the environment for life: to quickly understand surroundings, context, to prepare a comprehensive concept and the idea of public space transforming, to discuss it with locals and get their comments and suggestions.
Initially there were three architects in the landing team. And the area of designing was within the borders of the Kazan city, Russia. Then, after a successful implementation of the state program “Parks and public gardens in the Republic of Tatarstan” (Russia) in 2015 our team has expanded. In 2016 19 people were engaged in the process of designing parks and promenades across the Republic of Tatarstan. The result is that in 2016 within the state program “Year of the water protection zones” 28 parks, rivers embankments, urban lakes and ponds were designed and realized.
What are we doing?
We are working on the urban environment, using an integrated approach to solve any problems which gives us the chosen space. We believe that public space can change mind of citizens and their way of life through active involvement in the projects discussion for the development and direct participation in the process of realization. Our principles of design are the following: development and introduction of new approaches to the planning and organization of public spaces, based on openness, accessibility and the real needs of residents. The focus is on the creation of points of attraction, areas of activities, unique elements that reflect the specifics of the territory, the culture and traditions of the region, town or village. Each project is discussed with the locals. During the project seminar we use a special technique of participatory design. Tatarstan is the only region in the Russian Federation, where this technique is applied systematically during the process of the draft projects creating.
How we are working?
We visit the area, carefully listen to the citizens, inspect the location and examine its identity. A place itself gives us a clue how and with what we need to fill in the space, taking into account the requests of residents and regulations. Then we sit down by our friendly team and exchange opinions, suggestions and definitely find / think over / select the main idea of the project. Comfort, ergonomics, human scale – these and many other concepts are accompanied by creative group of the project further in search of organic and modern solutions of improvement.  What makes us different from the rest of offices?
Our team says that: ”Architects-perfectionists work in Archdesant.” ”We promote human approach to design: necessarily take into account the wishes of local residents, finalizing projects according to their comments, because we make it firstly for the people.” ”During the construction of the park we closely follow the implementation of every detail, that is why the architectural supervision is so important for us.”

Coastline of the river Ik 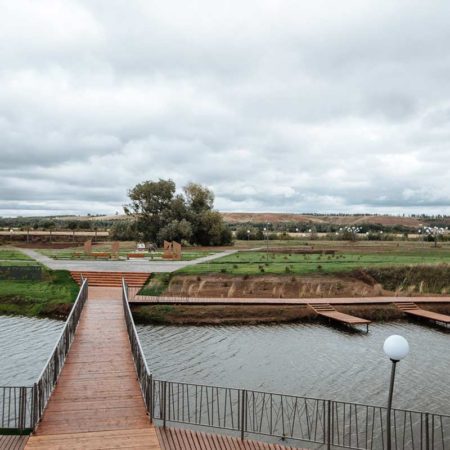 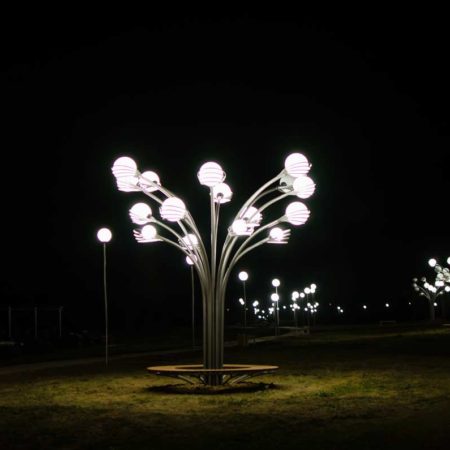 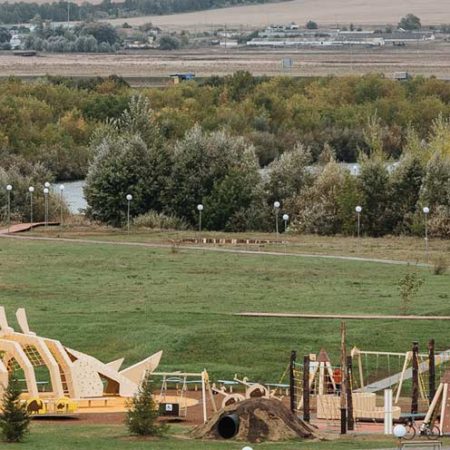 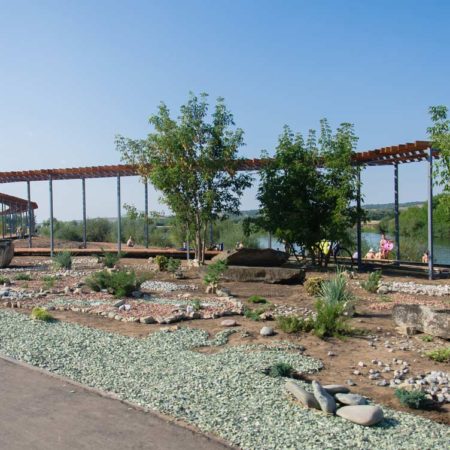 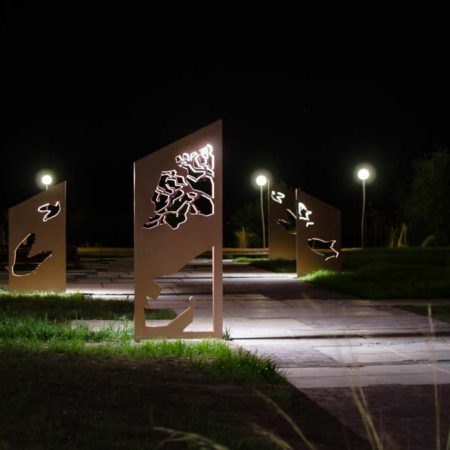 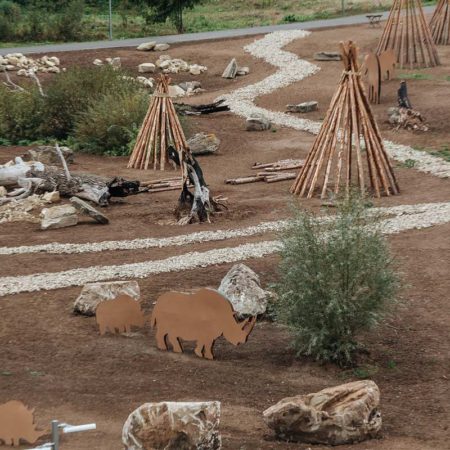 Location: Muslyumovo, republic of Tatarstan, Russia
Program: landscape park
Area: 16,5 ha (1st release)
Design: March – May 2016
Realization: June – August 2016
Client: municipality of Muslyumovo
Budget: 1 mln euro
More than a kilometer long park quay stretches Muslyumovo village on the left bank of the river Ik. The main target here was to create a new recreation area for residents joining the existing types of activity such as swimming, spending holidays, fishing. The link of times laid the basis of the concept, whilst the natural features of the place became reflected in the unique stylistic solutions.
The park consists of several small parks joined by cycling and hiking routes.
– The Front Park with the main gates made of stelas representing the animals and birds of the region.
– The Solar Park with a beach area, sun beds and sunshades, a volleyball court, parking with the functional pavilion and toilet.
– The Stone Park is a dry swamp with the boulders, old trees and the herd of ancient animals finding their pasture here. This park envelops a person in an atmosphere of harmony with nature and with oneself.
– The festival meadow designed in the form of an amphitheater, the fire pits, the playground and boat hire. The playground is themed in Archaeology and divided into “Forest” with a maze and “Prehistoric stop” with a fireplace, surrounded by fish nets and huts. Thus, through the game, children can get acquainted with the history of the region.

Coastline of the river Kazanka 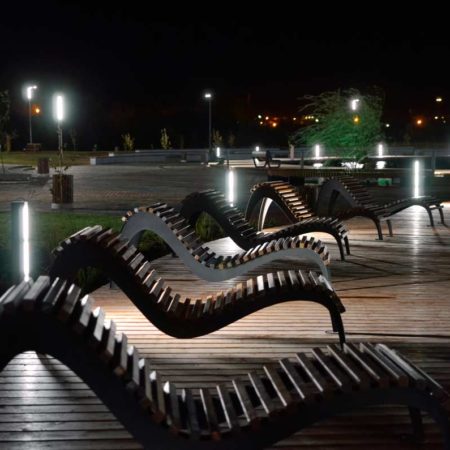 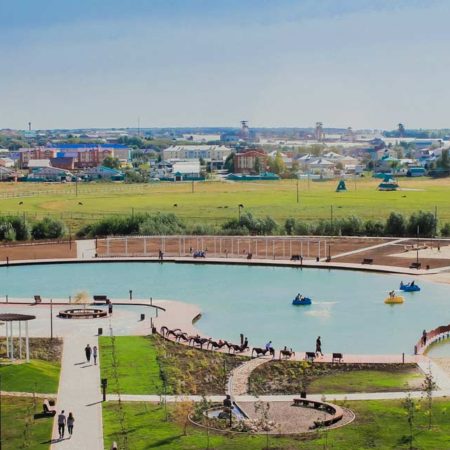 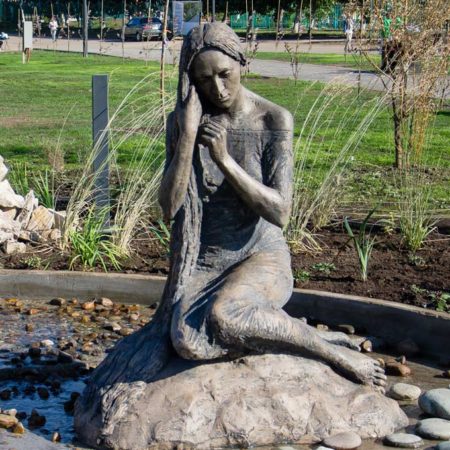 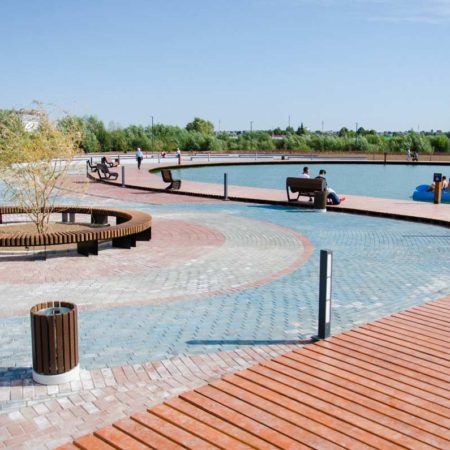 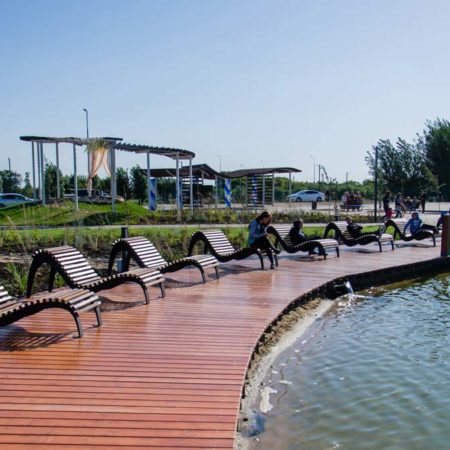 Location: Arsk, republic of Tatarstan, Russia
Program: city lake
Area: 2,16 ha
Design: March – May 2016
Realization: June – August 2016
Client: municipality of Arsk
Budget: 515 000 euro
The “Kazan Su” park is located on the embankment of the Kazanka River in Arsk with of 20 thousand people living in the town. The aim of the project was the construction of recreation areas near the water and the public beach with possibility of swimming. Since the Kazanka River is a protected natural area, an artificial lake with a sandy bottom filled with water from springs was built in the wasteland nearby.
The concept was inspired by the lines from Gabdulla Tukai’s fairy tale “Su Anasy”, irradiating the summer atmosphere and the joy of water fun.
The idea was reflected in “ripples” around the lake – the radial grid of the pedestrian area has zones for various activities.
The main entrance is designated as a pergola. The lake is smoothly outlined by a walkway with the wooden flooring, being the landmark of the development. The citizens can take a rest here, dipping their legs in the water or lie down on the loungers.
There’s an amphitheater on the slope of 1.2 m high for holding events. It stretches into quieter recreation zone: the green lawn for picnics and yoga.
A pebbled beach is located to the west of the lake. The children have a dedicated swimming area, fenced off by a particular mesh and having wooden benches with a high back.

Coastline of the Tyulyachka river 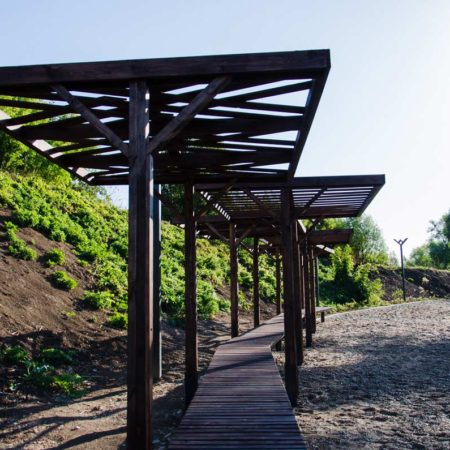 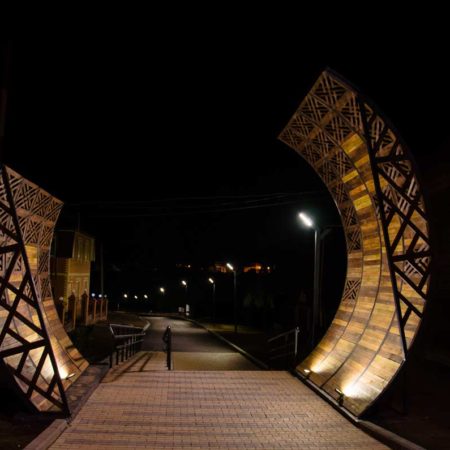 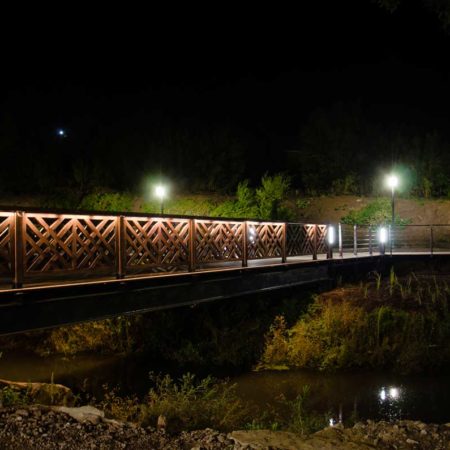 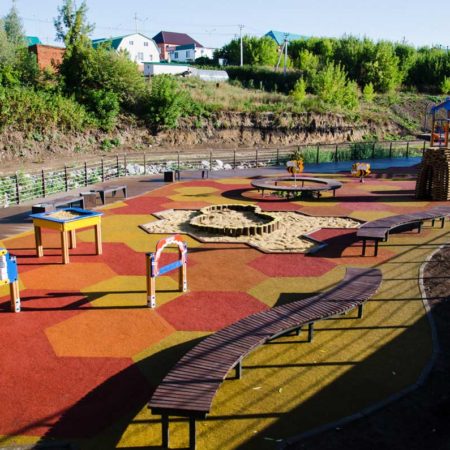 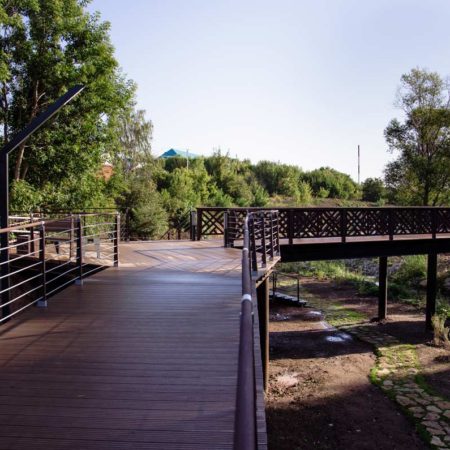 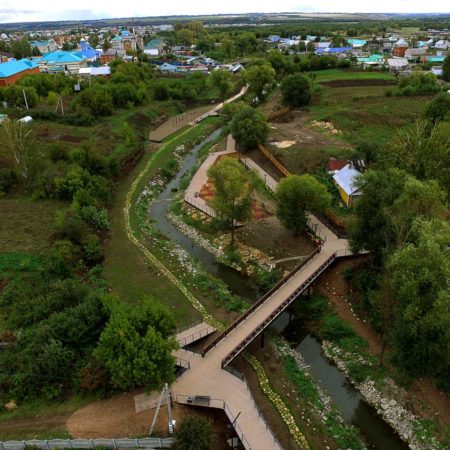 Location: Tyulyachi village, republic of Tatarstan, Russia
Program: flood-land landscape park
Area: 4,05 ha
Design: March – May 2016
Realization: June – August 2016
Client: municipality of Tyulyachi
Budget: 440 000 euro
The landscape garden is picturesquely nestled in the floodplain of the Tyulyachka River that runs through the village Tyulyachi with 4.5 thousand people living in it. Since during the high season the floodplain becomes the spate of the river, the pedestrian walkway made of decking was raised on piles to the unsinkability mark. The sliding banks were reinforced with natural stone, and the dams contributing to the aeration of the river were built.
The spatial patterning and the functional zone planning are based on the local traditional industrial arts.
1. Stone craft: the viewing point with an amphitheater on the slopes. The coasts are framed with riprap.
2. Bee-keeping: the children’s playground designed in bee-keeping. It has a particular rubber coating in the shape of honeycombs and spilled honey.
3. Blacksmithing: the playground with street workout equipment.
And three more zones – Field husbandry / Forestry, Fair/ Trade and Cooperage – with its own character, identity and content.
The team of architects has designed the lighting elements reflecting the cultural motives of the village. The same patterns laid the basis for all small architectural forms in the garden. 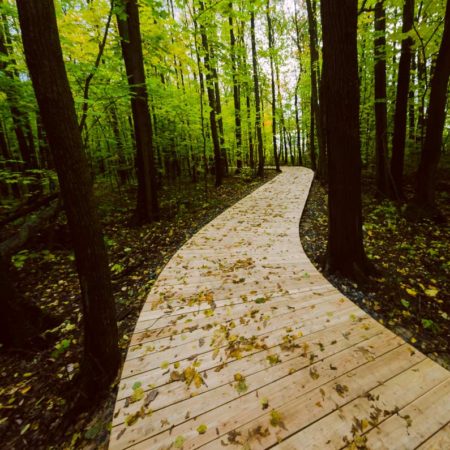 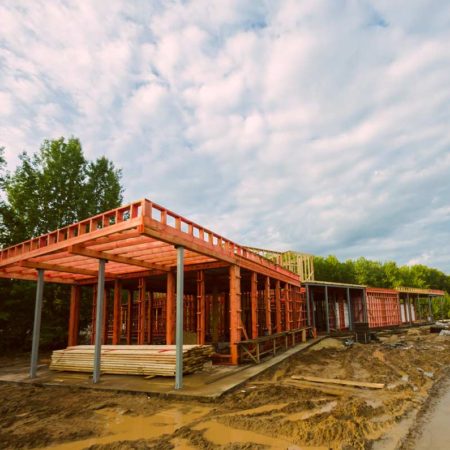 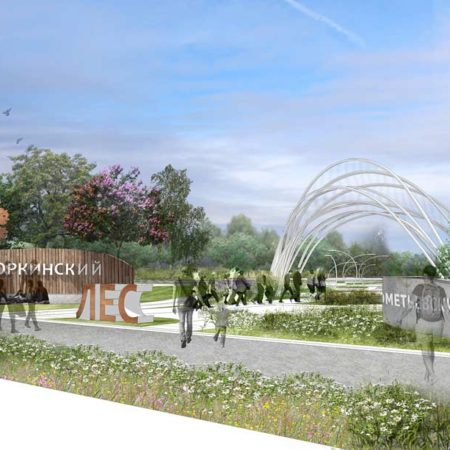 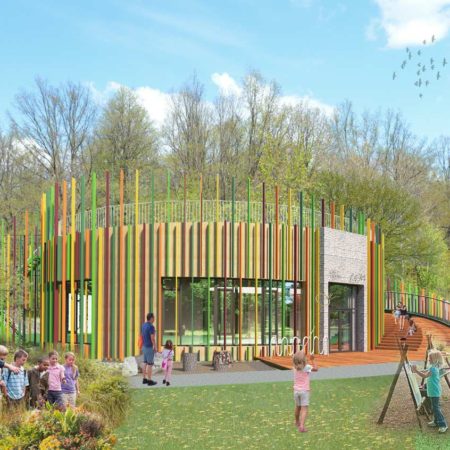 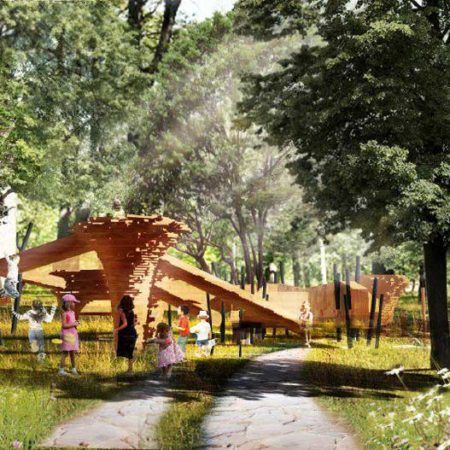 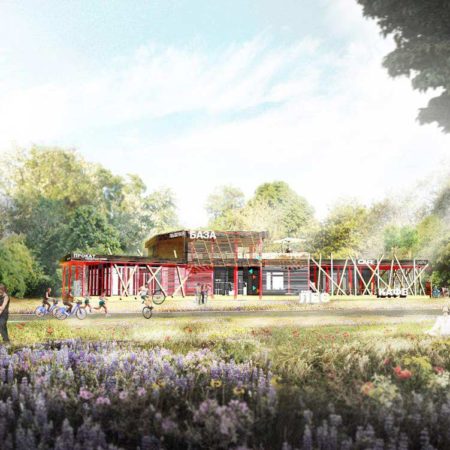 Location: Kazan, republic of Tatarstan, Russia
Program: city park
Area: 87,4 ha
Design: May – July 2016
Realization: August – October 2016
Client: municipality of Kazan
Budget: 3 mln euro
Gorki-Omet’yevo forest is a protected natural area and wealth of Kazan. At all times, the place has been actively attended by people for recreation, sports, exploring the environment, thus, the park concept was based on the conservation of the existing leisure practices and respect for nature.
The park has 3 functional zones: the Omet’yevo forest – an ecological zone, the Gorki forest – a sport and health zone and the glade – a family vacation zone.
The Omet’yevo forest is a unique wooded area. The transit route through it is made based on protective construction technology, with the protection of tree roots – namely, the wood flooring is laid over the polyethylene pipes bearing the lighting networks inside.
The Gorki is widely used by athletes. To develop the system of sports routes and separating the streams a special navigation system divided by the degree of difficulty, the distance and age has been organized here.
The central zone of the park is for families’ recreation. The current development concept implies the construction of the areas for active and passive recreation: the entrance with parking, ski-lodge, a café, a festival marketplace, a fountain, a sunny meadow, a playground, the Environmental Centre, the pump track and the perception zone. 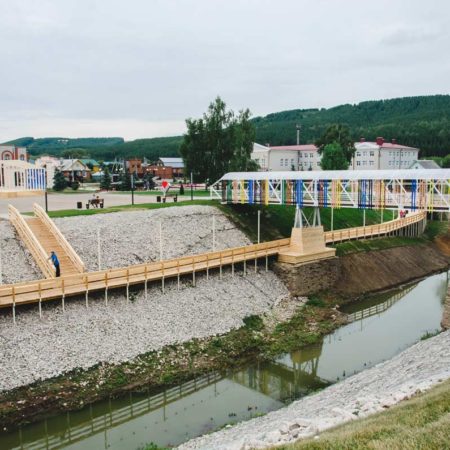 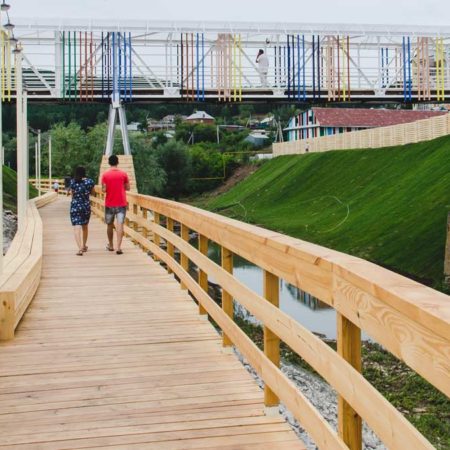 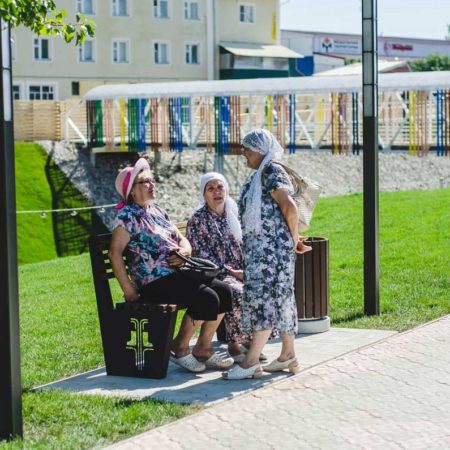 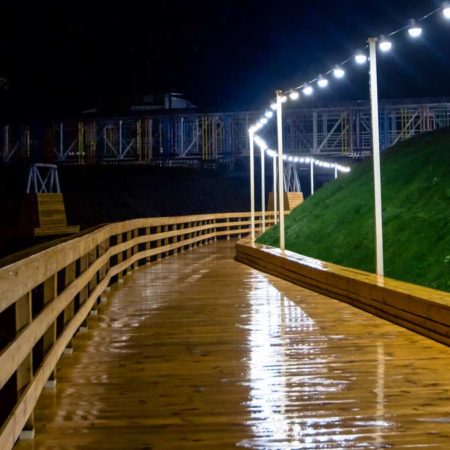 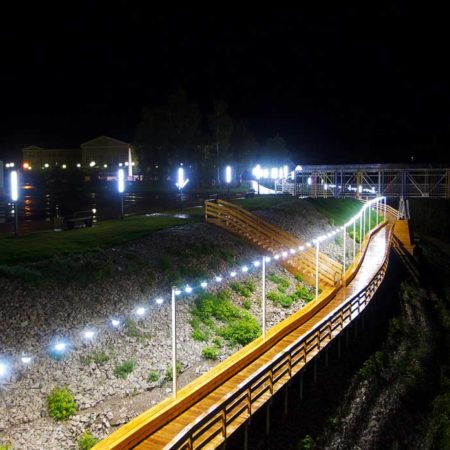 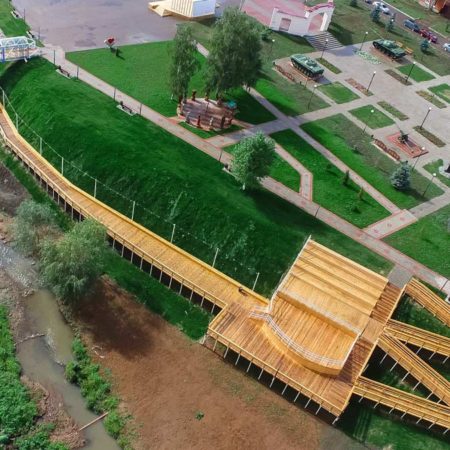 Location: Kukmor, republic of Tatarstan, Russia
Program: riverfront
Area: 1,6 ha (1st release)
Design: March – May 2016
Realization: June – August 2016
Client: municipality of Kukmor
Budget: 330 000 euro
The quay of the Nurminka River is located in the centre of Kukmor, the town with a population of 18 thousand people. Until recently, the river divided the city into 2 parts and was a sheer obstacle. The development of the embankment area was based on the idea of “a living river” – the establishment of public spaces along the Nurminka bank, the organization of a green walking framework.
Since the river banks are quite steep, the two tiers have been created here: the upper and the lower promenades, connected by staircases, ramps and an amphitheater with a terrace

Lower promenade runs underneath several pedestrian and road bridges. One can use the 3 equipped slopes to get there. One of them has an amphitheater. A peculiar bench of 160 m length stretches along the lower quay. The garlands of lights illuminate the quay at the night time.
Within the framework of the project a pedestrian bridge has been reconstructed with an application of the environmentally friendly materials. The bridge coating was designed in Kukmor national colors: orange, yellow, dark blue, emerald, coral, blue and white. New benches, litter bins and park lights appeared here on the upper quay. The benches sides are perforated with the images of felt boots – the symbol of Kukmor.