A design competition, which sought to find a creative and innovative design response to develop a destination playspace in Melbourne’s North saw Spiire win for a unique translation of the Aurora Australia. The brief was for the park and playspace to evoke the Aurora Australis theme, enable non-programmed play in a captured safe environment, embody and deliver sustainable outcomes, and provide recognisable waypoint on local cycling networks.

To meet this brief, the playspace became an innovative collocation of sculpture, play and shelter that explores the sinuous and ever-changing nature of an aurora with its characteristically dynamic arch and curtain forms. The overlapping, oscillating and variable form of the aurora inspired a design that hovers and moves across the playspace expanding and contracting as it flows. The elevated arches of the form became frames for nets, swing seats, dappled shade and weather roofs. The descending aspects of the form became climbable play elements, seating opportunities and locations for speak tubes. From every angle you view or engage with the form it differs from your last perspective, giving it a dynamic temporal, ever-changing character, which reflects the nature of the aurora. 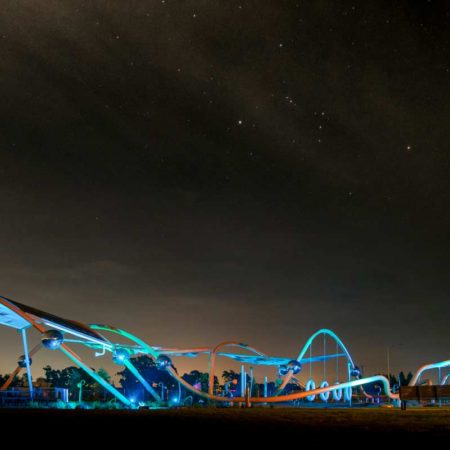 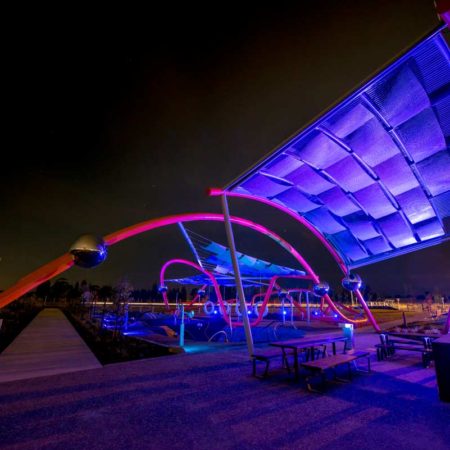 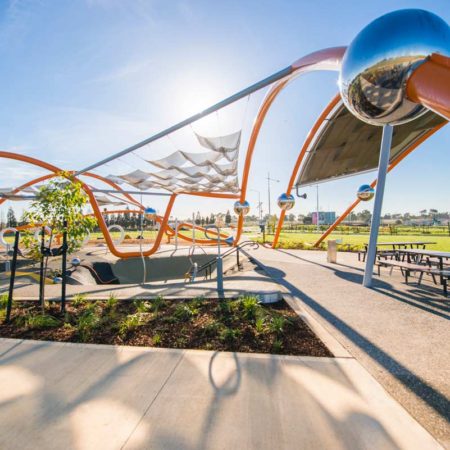 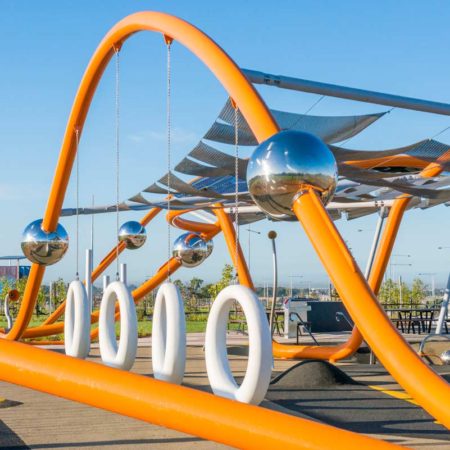 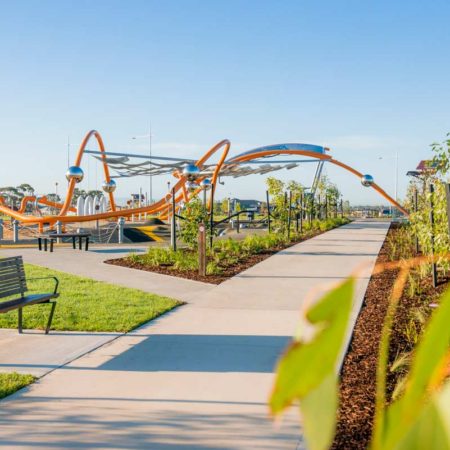 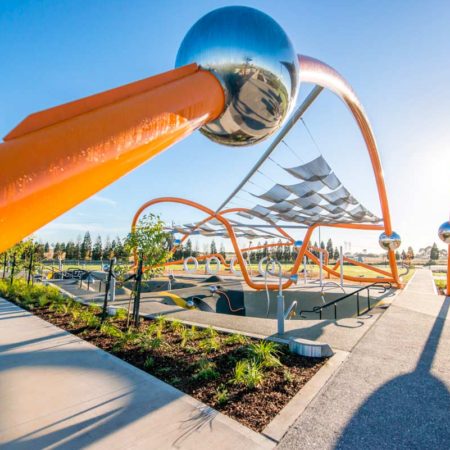 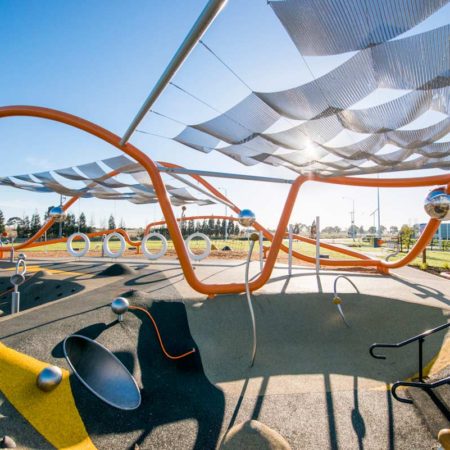 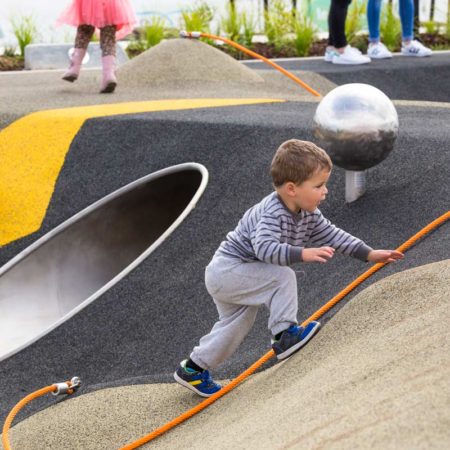 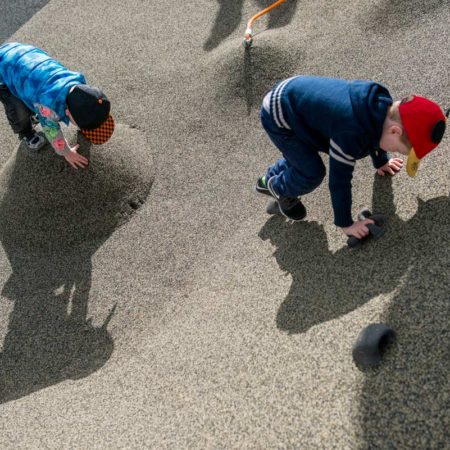 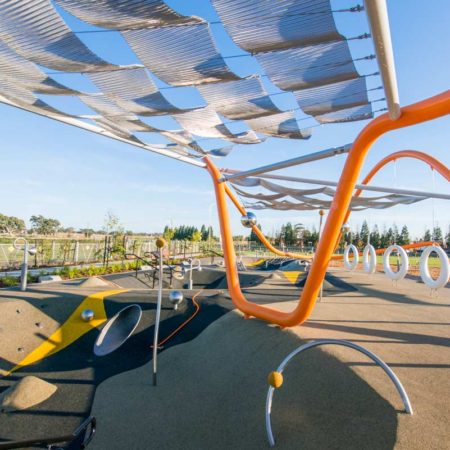 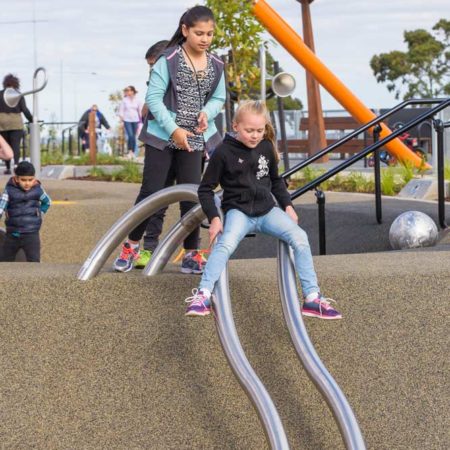 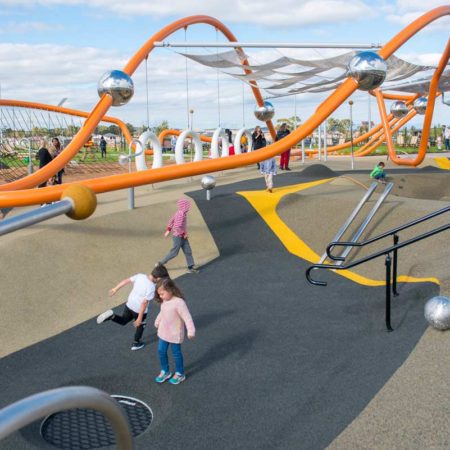 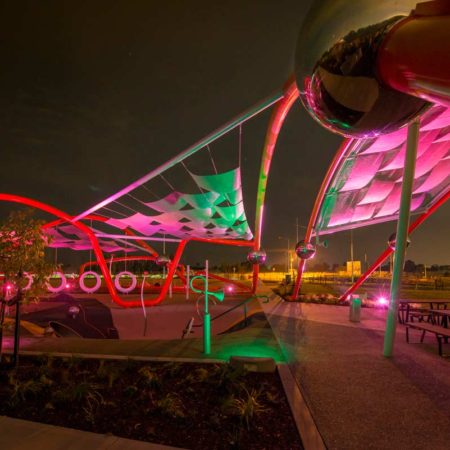 The main structure is complimented by a play terrain that sits underneath mesh shade. Much like the vision for the structure, the play terrain was designed to act in its entirety as a surface for play activities such as climbing, scaling, bouncing, hopping and sliding. We didn’t just want a safety attenuation layer under your feet but another complete and incorporated layer of play. Planets, moons, comets and shooting stars are represented by a diversity of shining play elements that hover, float, bounce, and streak across an engaging undulating playscape.

The structure itself has incorporated safety elements which allow safe climbing controlled via metre wide stainless steel planetoids. The climbing inhibitor planetoids have a dual role as a reflective surface that distorts and morphs as you look into them offering a temporal and dynamic view of the space and its occupants. The playspace design allows for various levels of challenge and engagement. Due to the terrain form, we have ensured that access is possible for all ages and abilities to the depressions via stairs.

During the initial community engagement stage of the project, we had very clear direction from residents. They were looking for a meeting place where they could foster new connections, which was something that wasn’t currently offered within the community. To encourage social interactions, we developed a suite of facilities that are collocated within the structure and terrain. Situated intimately within the playspace is an arching shelter structure with barbecue and picnicking facilities which can accommodate several groups at once. Opening out from the shelter arch, where the space interfaces with Edgars Creek, an observation deck has been created as a relaxing contemplation space equipped with a solar charging point for devices. In the future, the deck will be a waypoint node on the local bicycle network and the aurora structure will be a landmark navigation reference point for cyclists and pedestrians.

Another criteria within our brief was to deliver sustainable and innovative technological outcomes. To address this, we explored how we could capture and store energy and repurpose it within the space.

In response to this, we created a closed loop energy cycle. The shelter roof is covered in flexible solar panels that capture energy which is stored in a battery incorporated into the barbecue housing. The battery powers the barbecue, a free WiFi hotspot node with a 70 metre range, and a programmable LED lighting system that illuminates the main structure with a multi-coloured lighting display at night, which represents the Aurora Australis and brings to life the playspace.
The four hanging swing seats provide a rest and relaxation point. These feature an industrial auto and marine safety paint, which absorbs sunlight during the day and emits it at night as an ethereal glow.

To compliment the playspace’s free WiFi, sculptural solar trees act as charging stations for small devices. These allow up to four devices to be charged at once and store power for night-time charging.

Throughout the design and installation process, Spiire’s team of landscape architects led a collaborative group of engineers, artists and fabricators to ensure that the challenges of delivering a bespoke form and space were not lost in translation. We fostered social connections, encouraged health and wellbeing through active play, pursued technological excellence and ensured a sustainable and environmental outcome. The result – a truly unique playspace that will transcend time.