Our proposal for the main public square in the Russian city of Naberezhnye Chelny, is a fresh take on the role of public space in the single-industry city. Naberezhnye Chelny is a boomtown that sprung up in the late 70’s around the new KAMAZ truck factory. Priority was given to housing workers and meant that cultural facilities and quality public spaces were kept to a minimum and in some cases were left unfinished, as with our site Azatlyk Square. Planners, architects, designers and engineers came from across the USSR to be a part of the experimental city’s construction, however most of their visions remained on paper. The resulting urban environment is bold and impressive in scale, but hard to call appealing.

In our redesign of Azatlyk Square, we built on the spirit of experimentation and courage inherent in the city’s DNA while responding to the present-day demands. The site’s enormous size, its monotony and emptiness posed serious challenges but at the same time gave us freedom of flexibility in a creative approach. There was enough space to break-up the large square into different character-areas and transform it into a captivating, dynamic public space, and multi-functional territory.

Upon first visit to the site, we encountered a formal and monotonous relic of the Soviet past, underused and disconnected from the city and its public life. It was an empty large space (equivalent to three adjacent football fields), laden with ideological baggage — it was almost entirely occupied by an empty pedestrian axis, which originally was supposed to connect the City Hall on one side of the square with a never-built museum of Lenin on the opposite end.

We moved this axis to the edge of the square, where people could be protected from sun and wind by an existing line of trees. Instead of organising central perspectives towards the symbols of power, it became tangent to the surrounding functions and open to be extended and complemented in the future, connected to other public spaces nearby. We transformed the newly liberated territory into a “city carpet” — an enfilade of three squares, each with its own unique character:

The Event Square has an urban atmosphere. It is a large paved surface adjacent to an existing bus-stops and a shopping center. The square will hold a weekly local market as well as other special events organised by the city.

The Green Square is a space for lounging, passing through, or may be used as spill-over space for large events in the adjacent squares. It is criss-crossed by two diagonal paths, which were previously informal paths in the as-found condition of the square. The circular ramp viewing platform extends into this square, providing new perspectives of the square.

The Cultural Square is next to the existing City Hall. To optimise the functionality of the square and make it more pedestrian friendly, we proposed to remove the existing street that cuts the City Hall from the site, thereby providing pedestrian access to its lush internal courtyard. The square will be used for the yearly Christmas tree installation, New Year celebrations, outdoor theatre, other cultural activities, and photo sessions for newlyweds who are married in the City Hall.

The new square’s main feature is a shallow, round pool of water that is an extension of an existing fountain. It is overlapped by a new stage for public events. Day-to-day, the pool is a welcoming space for gathering and play. In autumn, the fountain and raised stage will be used as spaces for outdoor theatre. In spring and summer, when rains are heaviest, the fountain will overflow with water and become a place to splash around. In winter, the fountain will be transformed into an ice-skating rink.

We developed a unique paving pattern for each of the squares and integrated spaces for rest that are protected from the strong cross-winds and sun by strategically arranged “hills” and local species of trees.

In addition to the pavilions, we designed urban furniture and lighting elements, which were developed and produced by local manufacturers. For them, the challenges posed by the project provided a new and exciting learning experience. Some, trans-formed their production lines for the purpose of the project, creating a new niche in the city’s 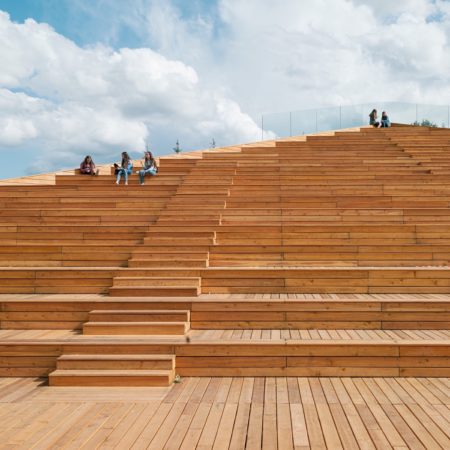 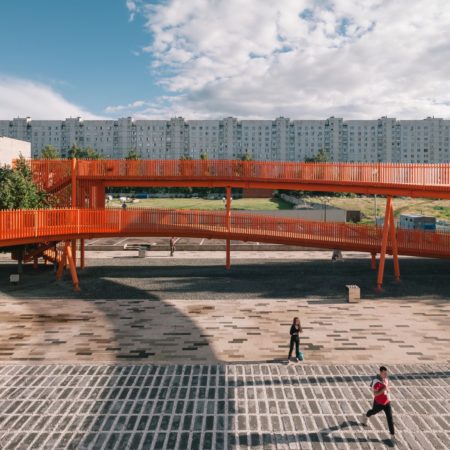 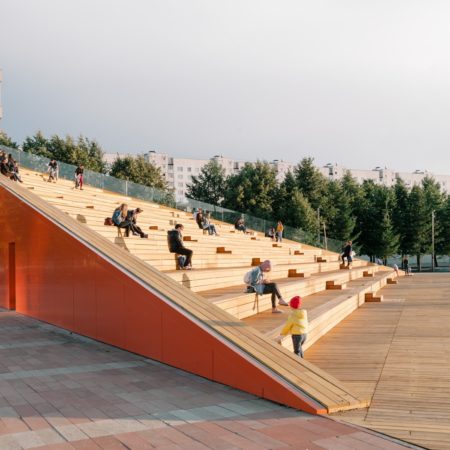 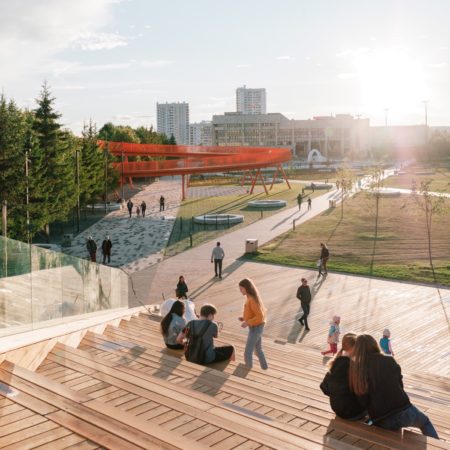 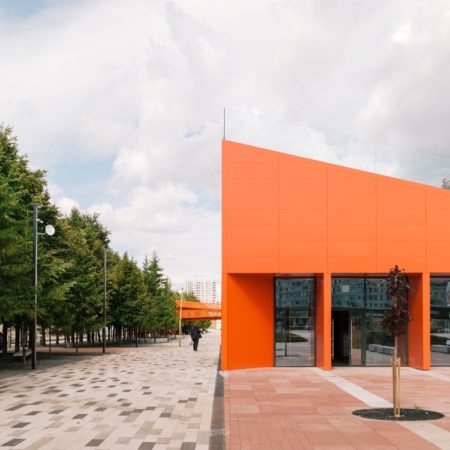 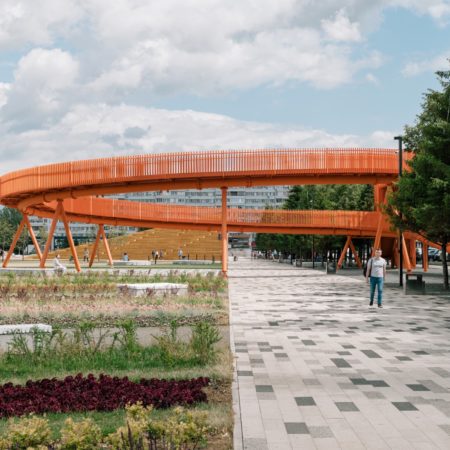 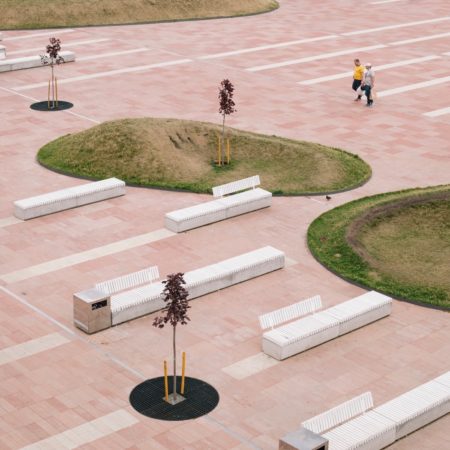 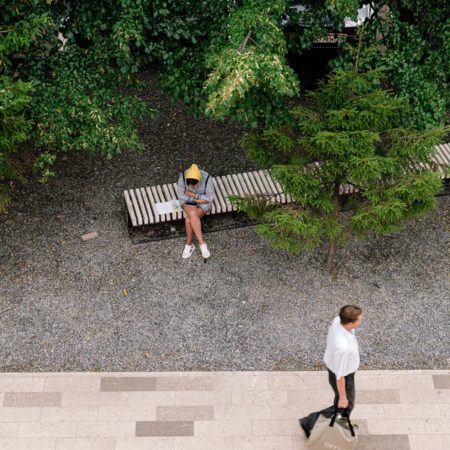 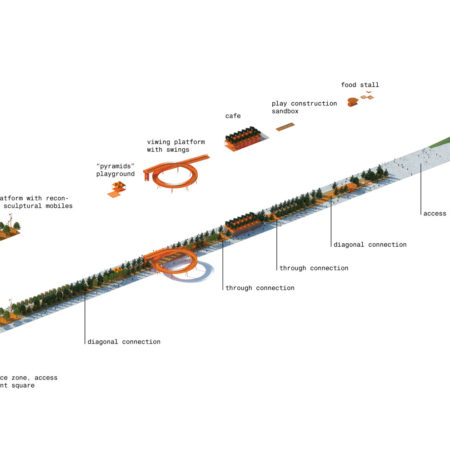 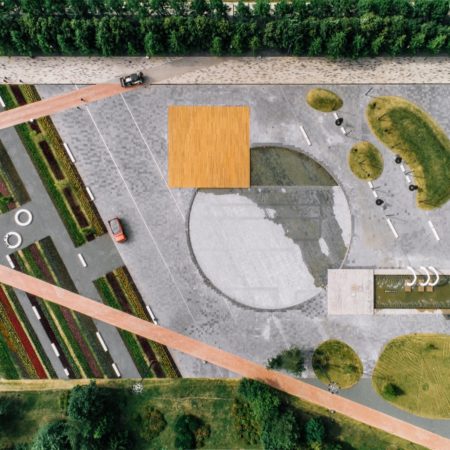 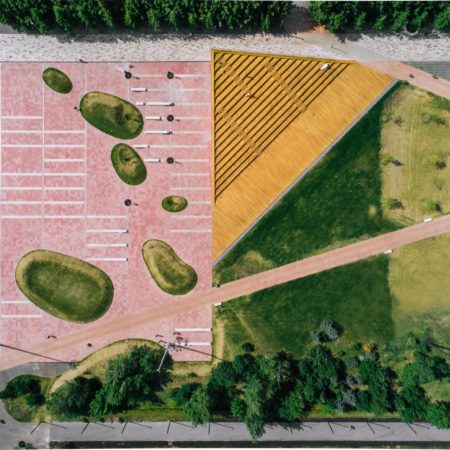 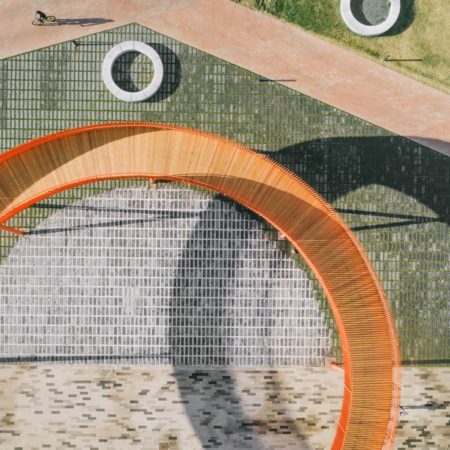 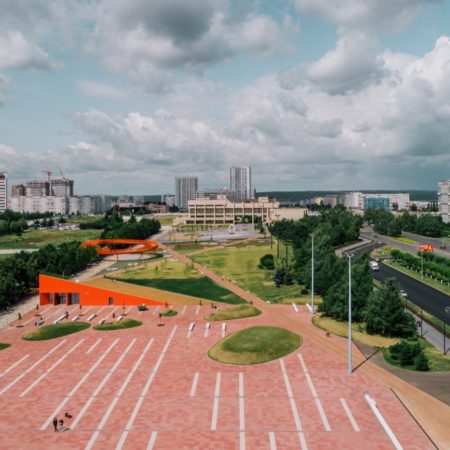 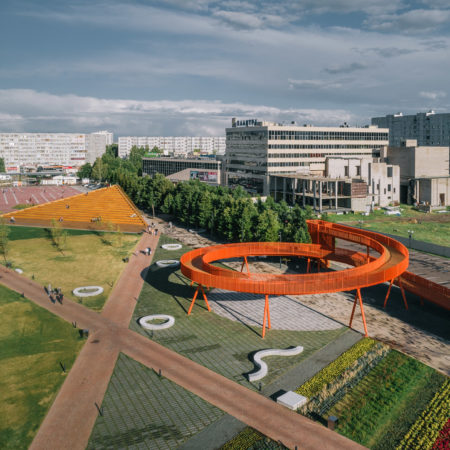 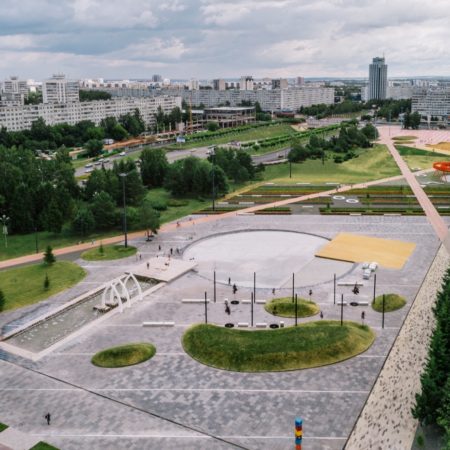 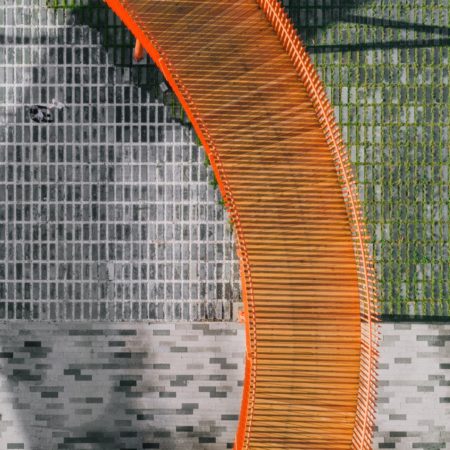 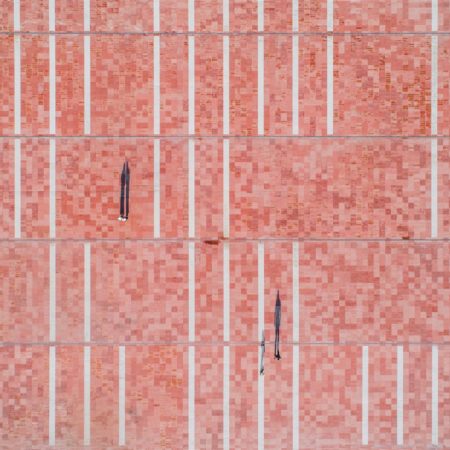 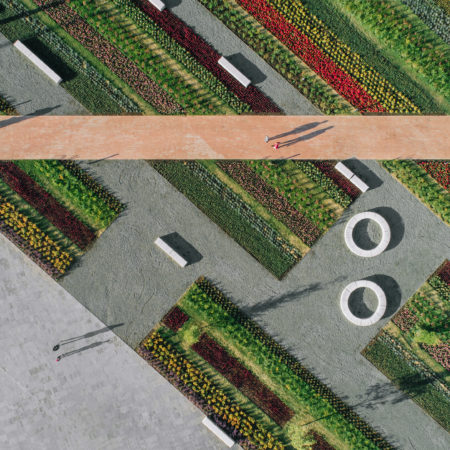 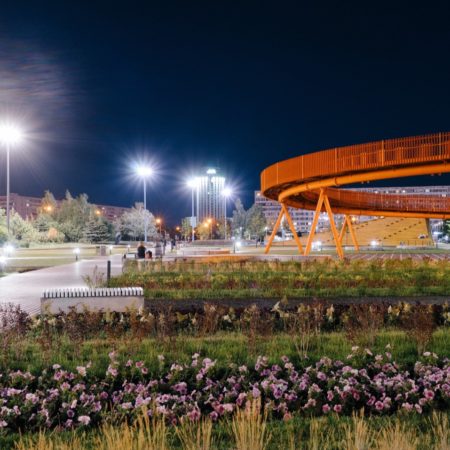 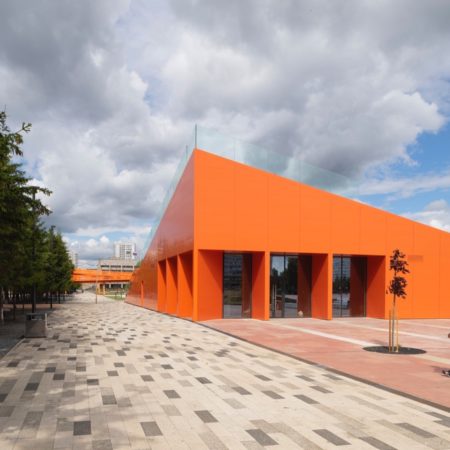 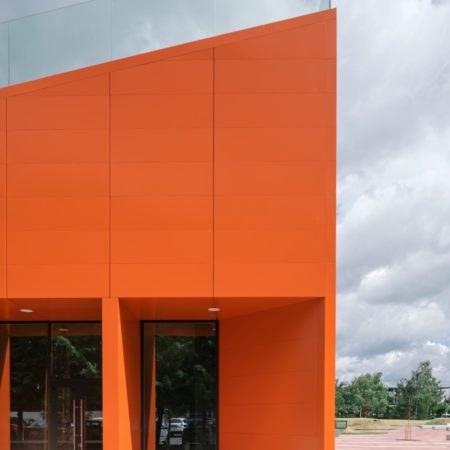 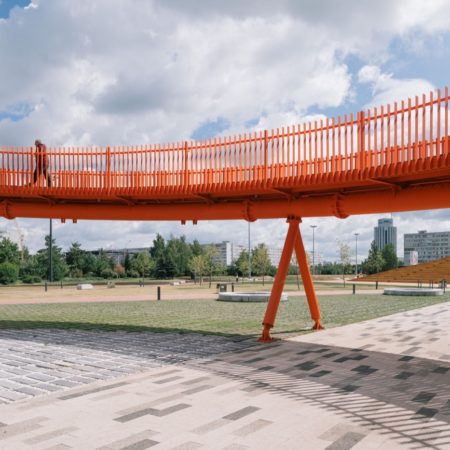 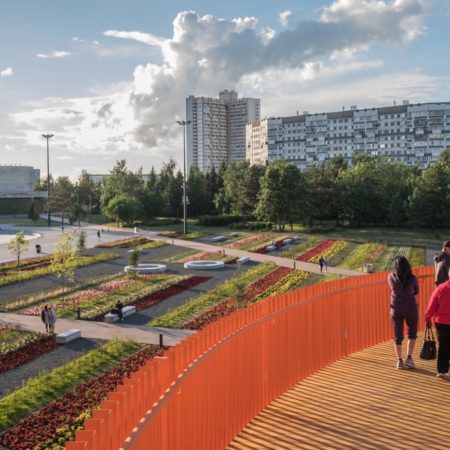 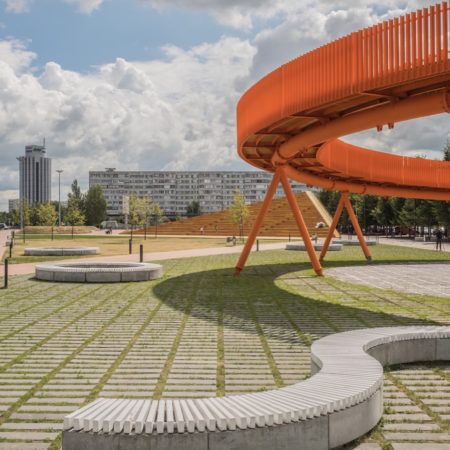 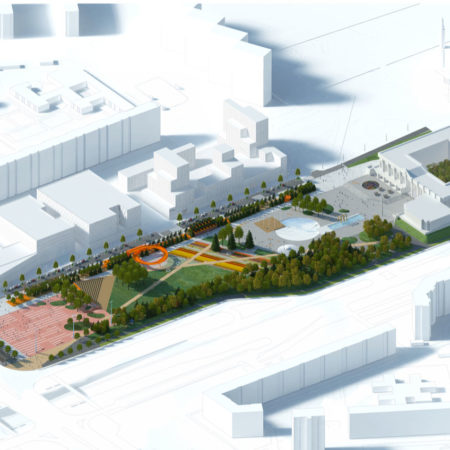 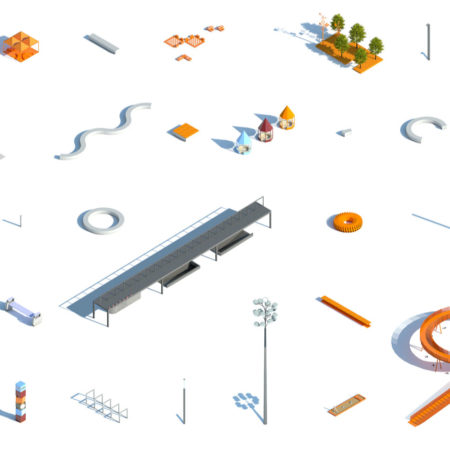 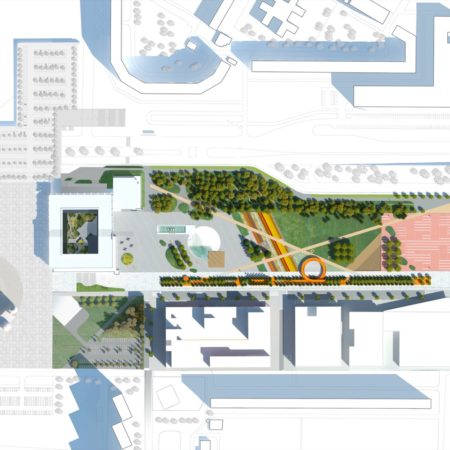