BASE is a landscape design, urban design and urban planning agency founded in 2000 by Franck Poirier, Bertrand Vignal and Clément Willemin, DPLG (certified by the French government) landscape designers from the Ecole Nationale du Paysage de Versailles. BASE combines the whole of the skills related to urban and landscape design. On the one hand, project management for urban parks or natural environments. On the other hand, public spaces design and planning for urban, economical, industrial or touristic territories.

BASE curently employs about thirty five architects, engineers, urban planners and landscape designers in three agencies : Paris, Lyon and Bordeaux. We work mainly in France and its overseas territories (Guadeloupe, Martinique, New Caledonia, Réunion Island) but more widely in Europe too, and we punctually work in Asia and in the Maghreb. In France, BASE most notably designs many public places and parks of all kinds, and is regularly noticed for its innovative proposals, between architecture, landscape design, ecology, design and programming. As a matter of fact, projects integrate most of the time a programmatic and prospective approach to the environments and seek to offer new outdoor lifestyles.
For urban projects, that are our main scope, BASE manages or work with multidisciplinary teams to imagine what urban places will look like.

Among the most published pieces of work are the new playground of the Belleville park in Paris, delivered in 2008, the Cité du Design in Saint-Etienne (with the Berlin agency LIN), the garden of the Familistère de Guise, the historic contest for the 300 hectares of Tempelhof airport in Berlin (where we came second)…

In 2016, the Lyon agency currently works with OMA on the Chemistry valley, a 9 000 ha territory in the north of Lyon, and on the Montpellier Campus

The Bordeaux agency is constructing new banks in Nantes, as well as a new 30 ha urban parc in Rennes. They recently won a new competition on the Réunion Island for a new Volcano Themed parc. BASE Paris develops several housing districts around Paris, Nancy and Angers, or Mauritius. They continue to work together with Bjarke Ingels from BIG on the Europacity project in Gonesse. They also lead an important urban study in Clichy-sous-Bois and design the new Michelin Campus in Clermont-Ferrand. 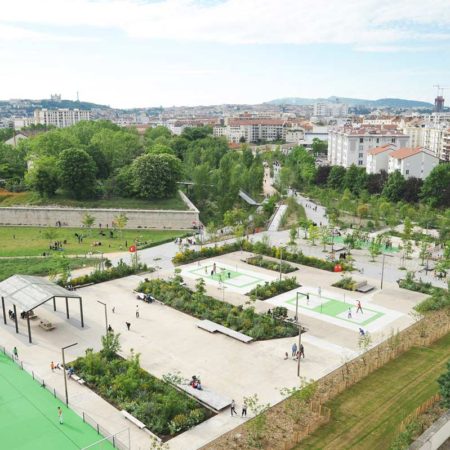 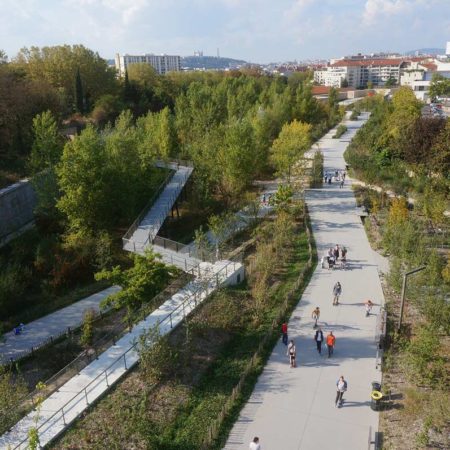 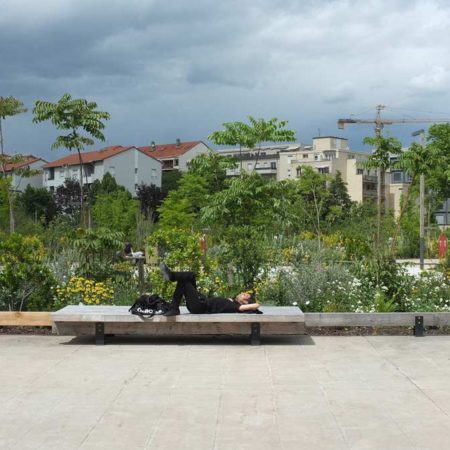 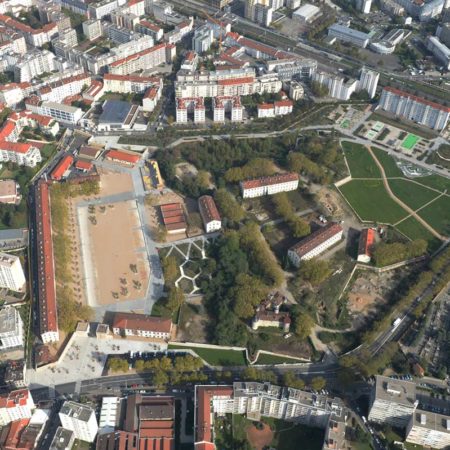 In the heart of Lyon, on the old Sergent Blandan barracks from 1830, a new public space of 20 hectares is opened in 2013. On this nonstandard site, invisible for a long time, new urban, contemporary and exclusive uses have been designed for the account of the Grand Lyon. The issues are those of memory and military history, of plant reconquest and urban renewing, of sharing and appropriation, of sports and games. Around the central fortifications, the ancient logic of defensive fronts and bastions is transposed. New spaces of discovery, of escape and meeting are organized : plains of moat, horticultural fronts, garden of reconquest, parade ground, wave of ramparts, many reasons that give rise to specific uses and environments, in resonance with the history of the site. The first part was delivered in 2013, and turns this site into the third urban park of Lyon. Very opened and based on uses, sport and sustainability, this first part offers exclusive, sportive and playful activities. It also gives rise to singular spaces where the wastelands mingle with the historical vestiges and advanced equipments, although very accessible (skate park, playground, sport ground, etc.). The parade ground, new public place of 4 acres reachable 24/7, also liable to flooding for rainy days, in front of the university campus, and served by tram T4, is quickly became a new social theatre, a place of meetings and spontaneous gatherings. 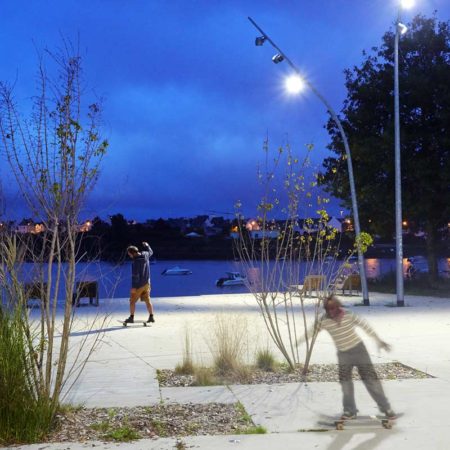 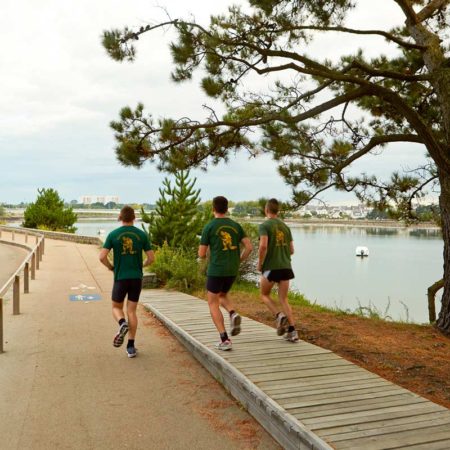 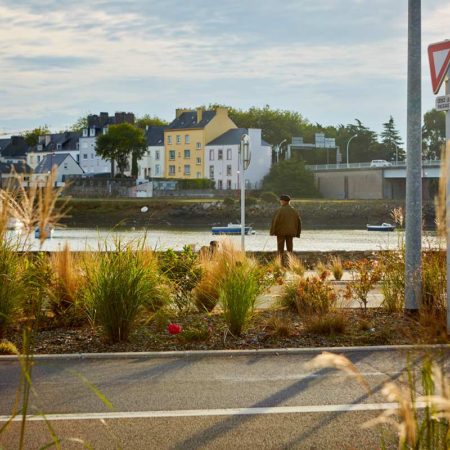 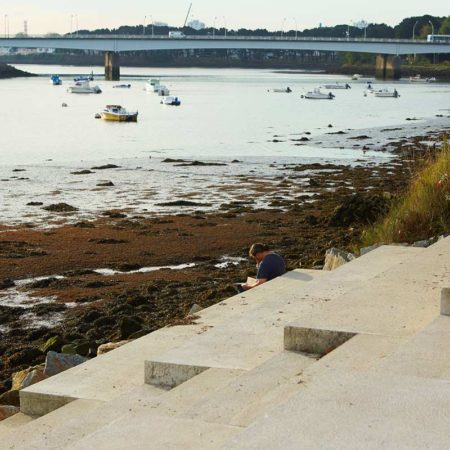 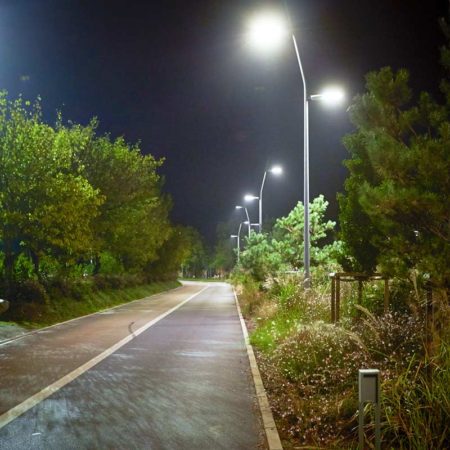 River landscape
The new Scorff Boulevard is designed as a linear park: wild plant entities mixing with ergonomic and fun trails. Lanes are so many opportunities for coastal explorations. Each track is wrapped in a plant thickness. The boulevard gets a more natural ambiance than urban. The existing pine forests line along the Scorff in coastal folds: half-moon formation that provide contrast to the banks.

This landscape framework will intermittently supplemented by vegetable plantations flowing of town next to the banks and lanes pass through these bilateral green pockets.
The soil (re) traces of coastal profiles in broken lines, which “stick” sometimes to the contours of the bank, very close to the water, or otherwise move away to make space for a larger plant or still divide this green thickness to allow plantations lines seep into two circuits.

They can also expand to generate break spaces, or lengthen the walk by bifurcations, generating a rhythm in the course: gazebos, dock near the water, entertaining and living spaces. These paths are brushing themselves on several sticking points for the passage from the city to the Scorff and vice versa. These sticking points are the existing crossroads rearranged to make real public squares. 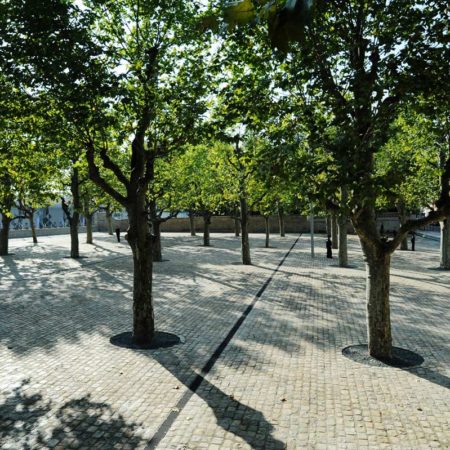 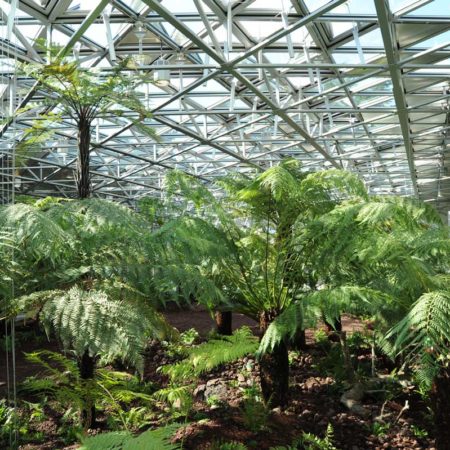 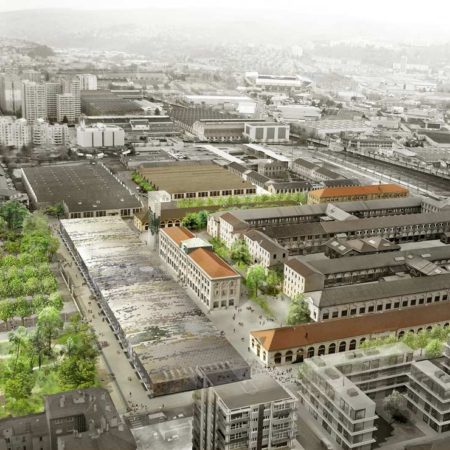 Opened in October 2009, takes place on the arms factory site, formerly Giat Industries, which ceased its activity. The main element is a construction of nearly 200 m long, called Platinum by its Berlin architects (LIN), home of a greenhouse ferns of 400 m2. The public areas are built around the central connector: up Arms’place restored there are two historic gardens fully reestablished, the new Manufacture’s place, and its slow ways which served the site, various indoor and outdoor exhibition areas, research rooms, the observatory tower, the new school of Fine Arts and the tramway access.  BASE sought to register the project, which has strong cultural and economic challenge for the city of Saint-Etienne, in its site (Heritage), history (military logic), geography (the Achilles plain). 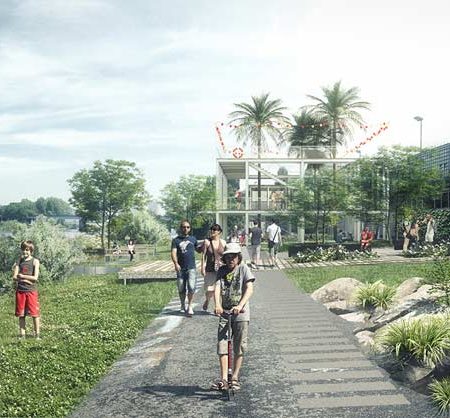 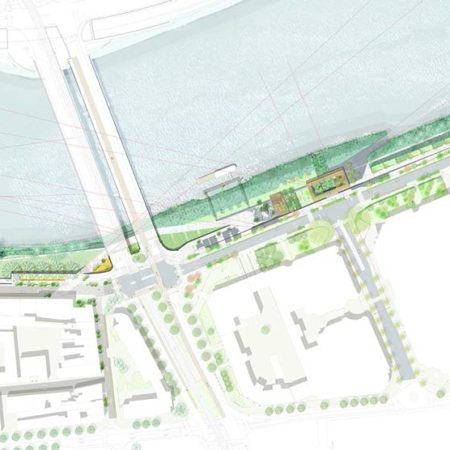 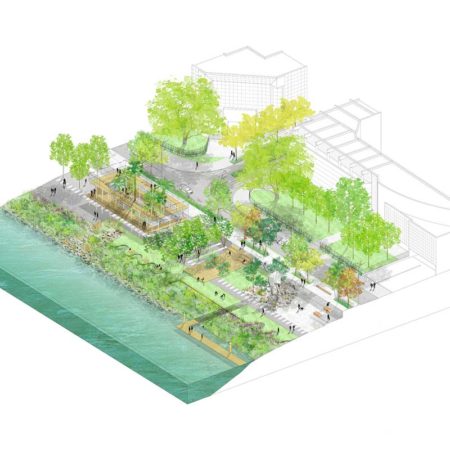 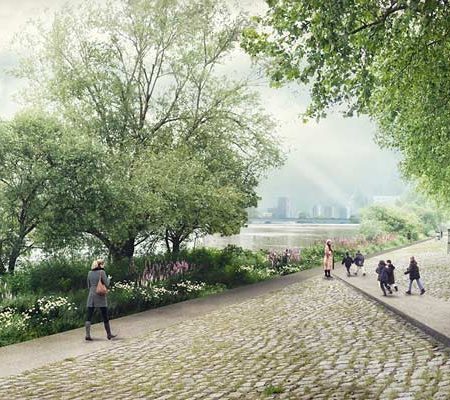 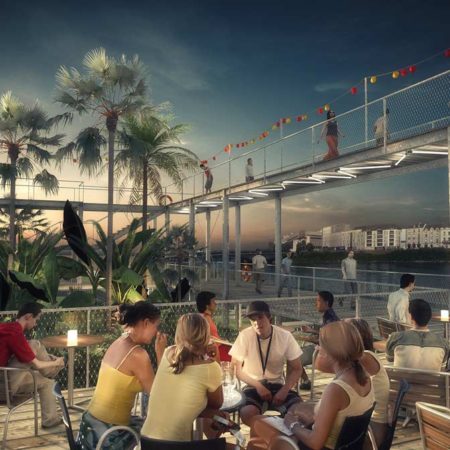 The design of the Loire edges is one the main component of the Île de Nantes urban project. The choice has been made to strenghthen two different ambiances on each side of the Général Audibert bridge. On the West side (Rhuys and Hoche banks), it is taken care to highlight what is already existing : paved ground, plane trees line, site typology… It is about extending here the local uses and cultures that progressively accumulated themselves on the river banks. Past the Audibert bridge, the East side is perceived as a newer place from where new uses may arise. Here, invention comes first. The design proposal enhances the natural and water-related character of the banks, where it is wished to set an open-air café. In adjacent streets, general traffic principles are based upon the idea of calming it down by giving a specific attention to their connection to the banks (in particular thanks to heightened squares). On the banks, the main objective is to recreate continuities between sustainable travel modes and to re-establish soft transitions wherever they have been interrupted by road infrastructures. All slopes are maintained but pathways are created so that any public can access to it. On the river edge, a metallic footbridge allows pedestrian wandering when the tide rises and floods the bottom of the bank. Terraced seats offers a great view on the river. On the banks’ high part, it is taken benefit from the site typology to create balconies upon the Loire, giving rhythm to the flowpath.