A rammed-earth wall and a field of curved ridges occupy the grassland between a park and a secondary forest. The ground is on the northern edge of the former Taiwan Sugar Corporation office campus. As a dormitory area for the sugar factory employees, the site used to be a busy street with a barbershop and a movie theater. After the closure of the factory, the dormitory buildings were torn down, and the office complex was transformed into Tsung-Yeh Arts and Cultural Center.

The materiality of the ground defines the existence of Being “Here.” Taking cues from the sugarcane cultivation and irrigation, the project echoes our sauntering experience along the decommissioned railway lines in Madou. The project stages the secondary forest and registers the transformation of the place from a wilderness into a humanized landscape. As one of the sixty works of Madou Sugar Industry Art Triennial, the project includes a reconnaissance workshop, in which participants surveyed the condition of the ground and collected objects for the “inlays” of the earthen wall. 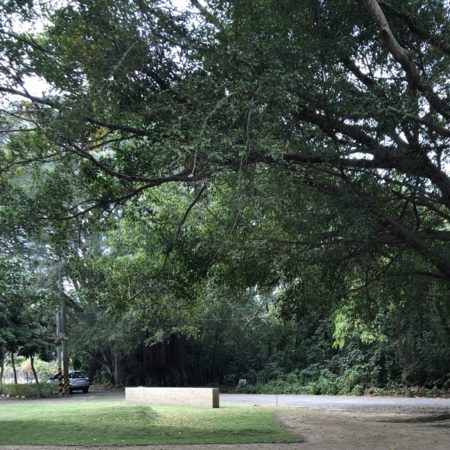 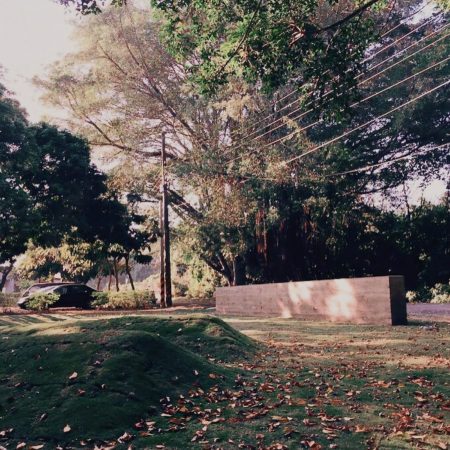 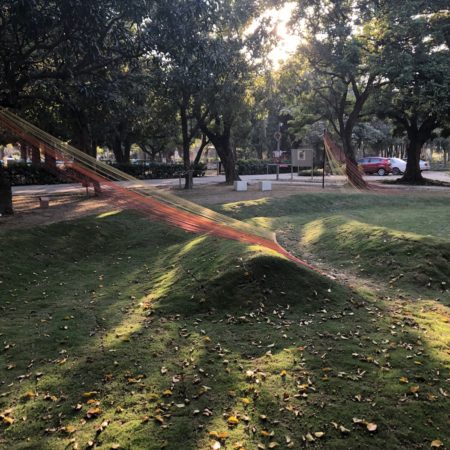 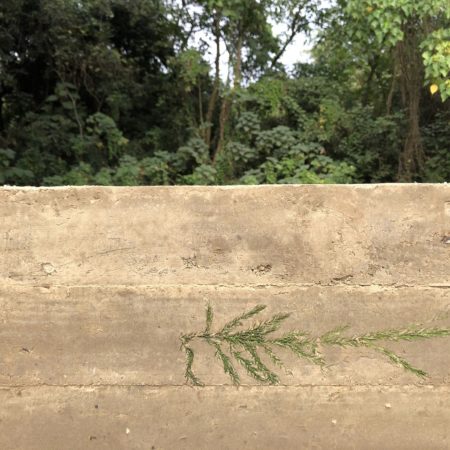 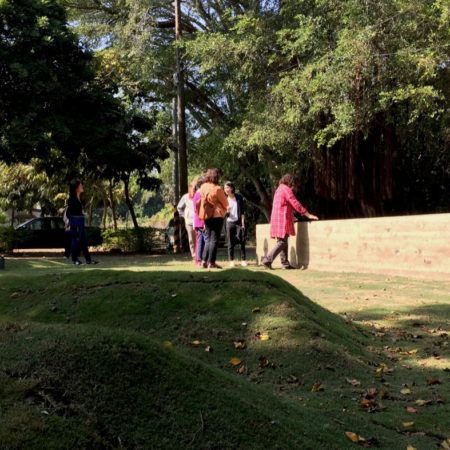 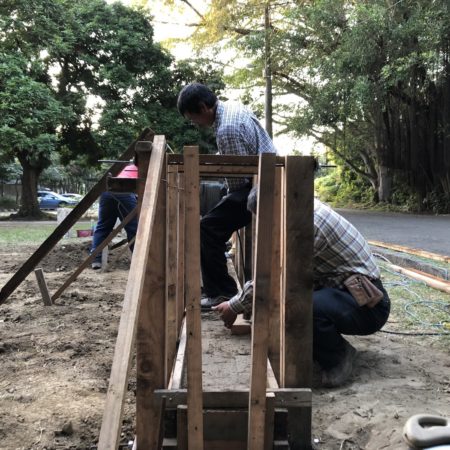 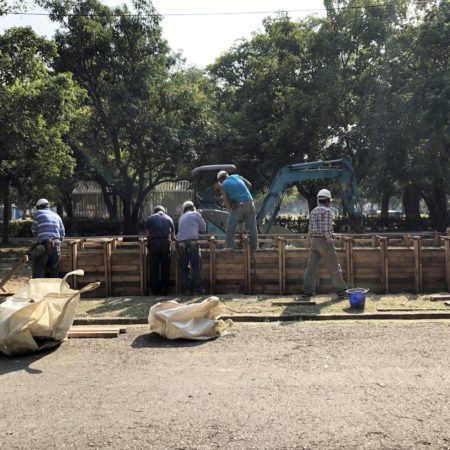 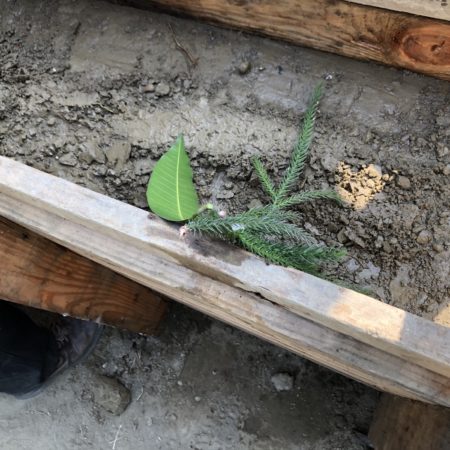 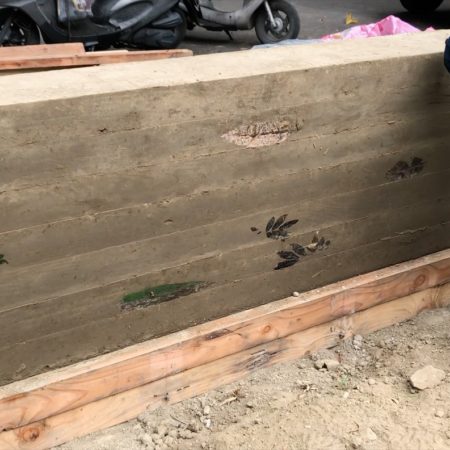 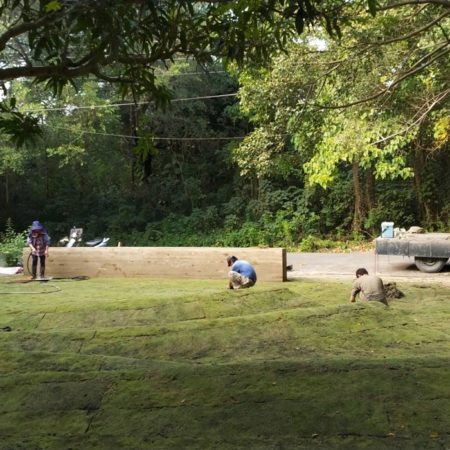 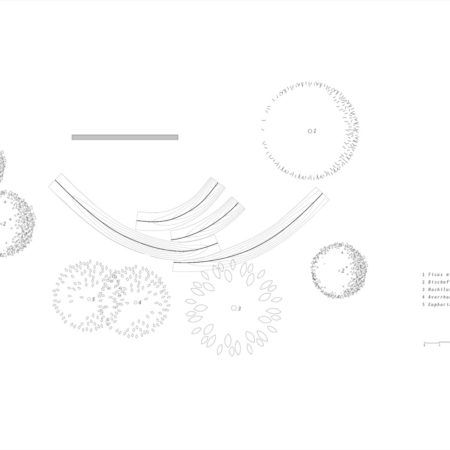 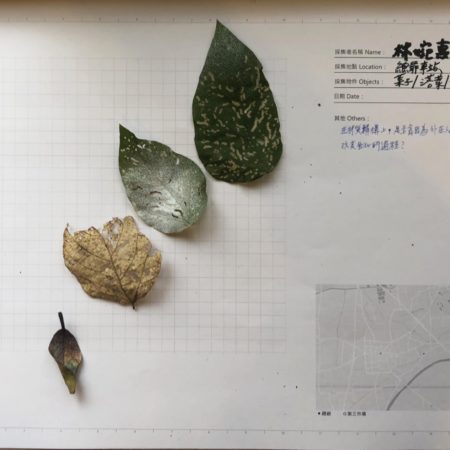 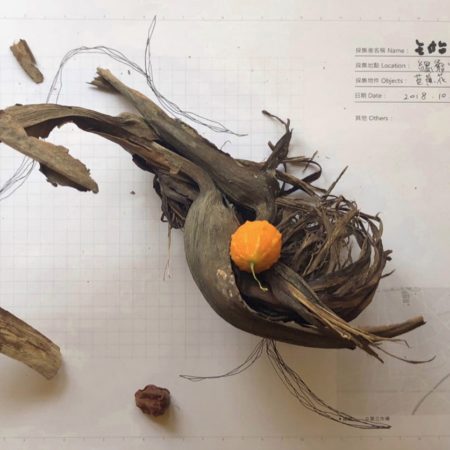 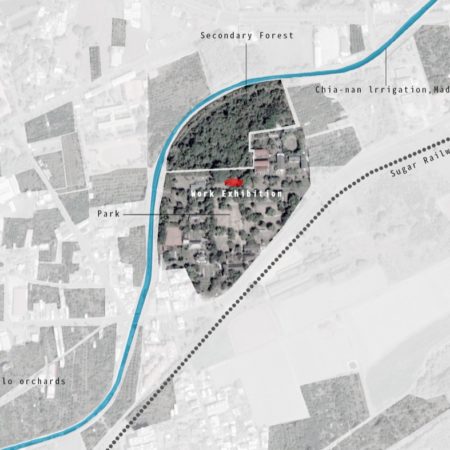 During the colonial period, Japanese company Meiji Sugar Corporation aimed to increase the productivity of the sugarcane field through scientific management and cultivation. The extensive railway network operated throughout the town of Madou and expanded to nearby cities after World War II. Since the service ceased in the early 1990s, people transformed the railway stations and routes into trails, orchards, and kitchen gardens. Contingent on their time and places, these sites were the result of numerous interactive and dynamic processes.

We place a living wall that would register the environmental forces of the surrounding landscape over time. The debris, fallen leaves, and withered branches were placed in the formwork before the earthen process. The accumulative strata of rammed-earth layers each measured ten-centimeter thick. The ancient construction technique reverses the decomposition of the rock into the soil and hardens it again. The surface of the wall exposed these “inlays” while the appearance of the overall structure accumulate change. The result is not a structural or functional wall but an organic one. The traces of weathering and decay continue to evolve. The field of curving ridges took cues from the standard planting unit of the sugarcane field. After the plows turned over the soil, the earthworms were eliminated, and the ridges were leveled. The width between the ridges is between 120 to 150 centimeters. Seedlings are planted in sugarcane valleys, while bagasse and soil are used as topographical materials.

The project materializes the exchanges between natural resources and human colonization, arrested in the accumulative strata of the terrain. The scale of the interwoven texture responses to the bodily experience of walking through the landscape. The ground occupies the site as a solid entity while transporting the experiences of the visitor to another dimension in space and time. The experience of the landscape is a poetic material and touch. The material presents the physicality of the traces. Here the haptic quality is not only a surface phenomenon, such as roughness versus smoothness, the feeling of thorny versus silky. It is also about internal textures of density, viscosity, and ductility.