Blakeburn Lagoons Park is a new green infrastructure facility, wildlife preserve and public park in Port Coquitlam, British Columbia, Canada. This 11-hectare site was used as a sanitary detention facility until 1978 when it was decommissioned, fenced off, and effectively abandoned. The lagoons, replenished with only rainwater, became stagnant and frequently dried up during summer months. Environmental assessments over the years revealed levels of cadmium, copper, lead and zinc in the lagoon sludge exceeded regulation standards for urban parks. High cleanup costs deterred the site’s redevelopment.

The City of Port Coquitlam engaged ISL to undertake design and construction services for the project. The original goal was to convert the derelict lagoons into a public park. The ISL team, composed of experts in stormwater modelling, municipal engineering, landscape architecture, and environmental management, proposed converting the settlement lagoons into ecologically rich, bio-remediating constructed wetlands.

The proposed wetlands needed new water sources to be ecologically viable. Hydrological models identified an opportunity to utilize stormwater runoff from an adjacent residential neighbourhood, an area that was prone to flooding. The proposed solution diverted stormwater from the utility system to the lagoons. This had the dual benefit of keeping the lagoons topped up with water while reducing neighbourhood flood risk. This model, coupled with the environmental requirements, helped the ISL team determine the shape, depth and surface area of the lagoons. 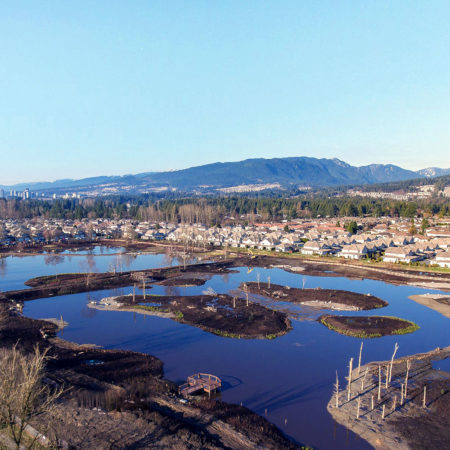 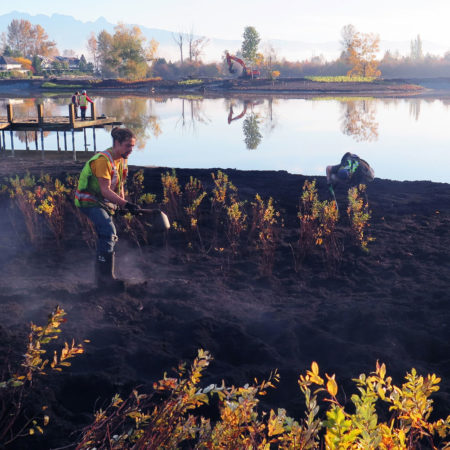 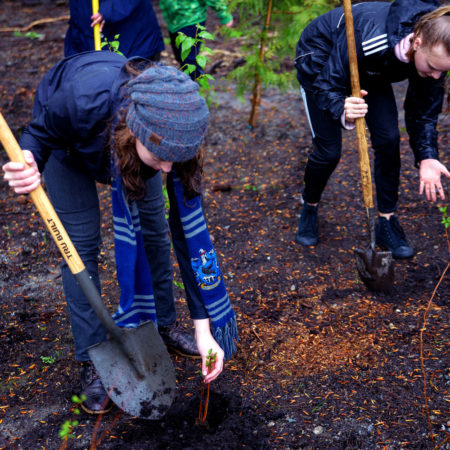 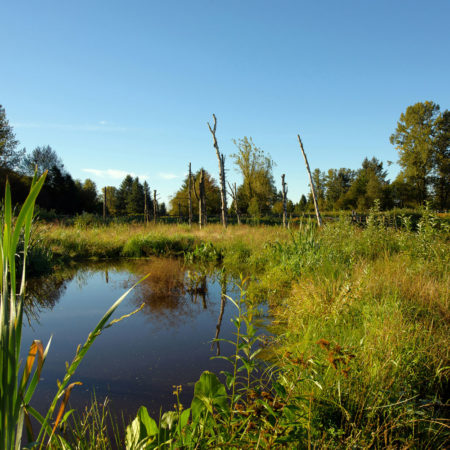 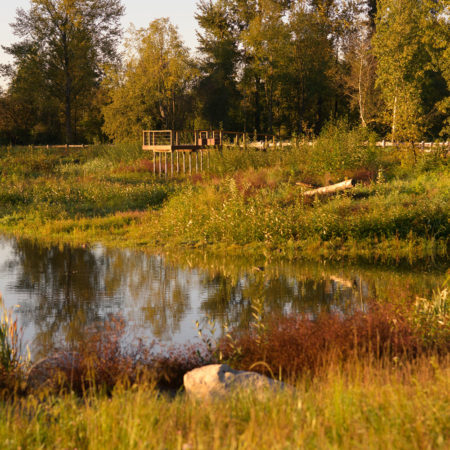 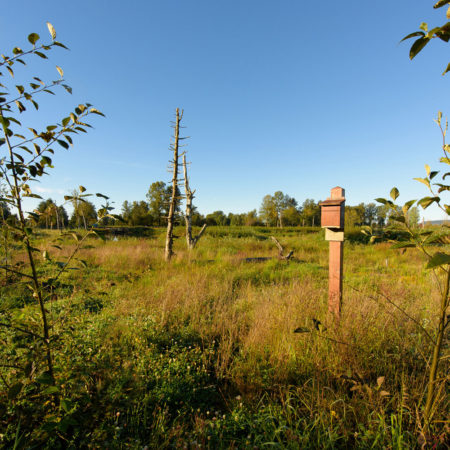 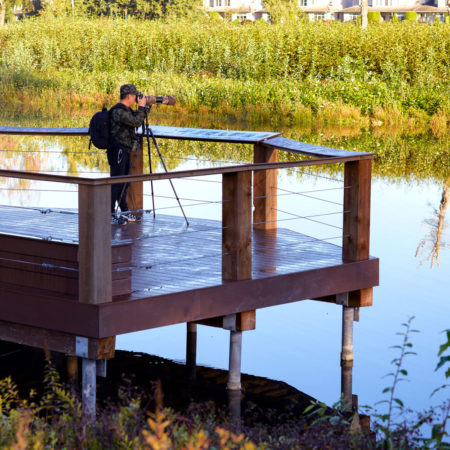 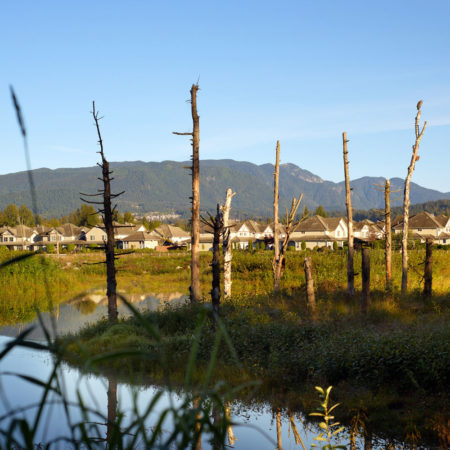 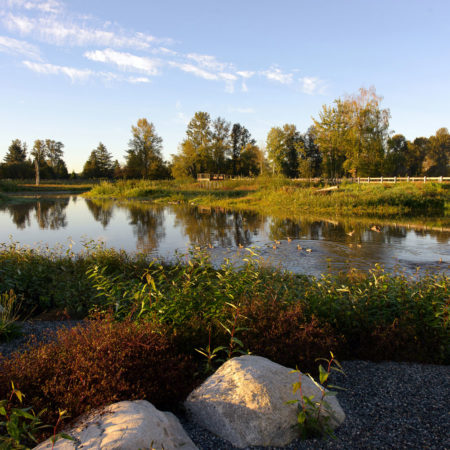 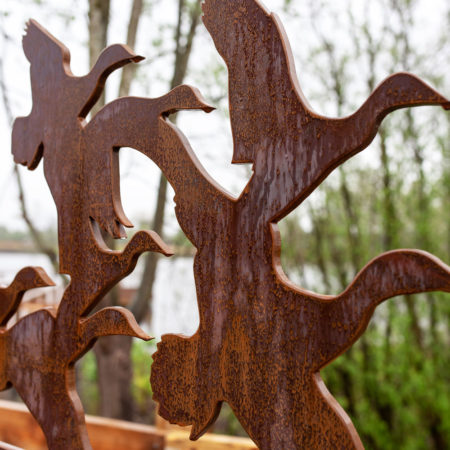 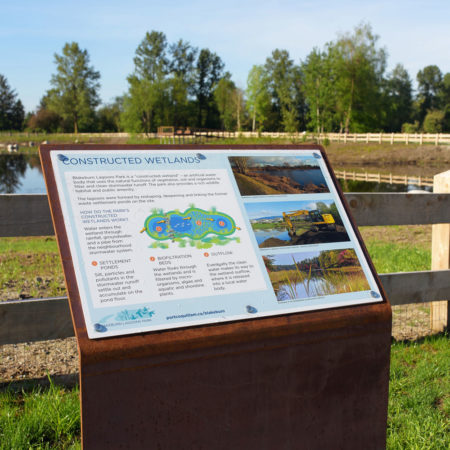 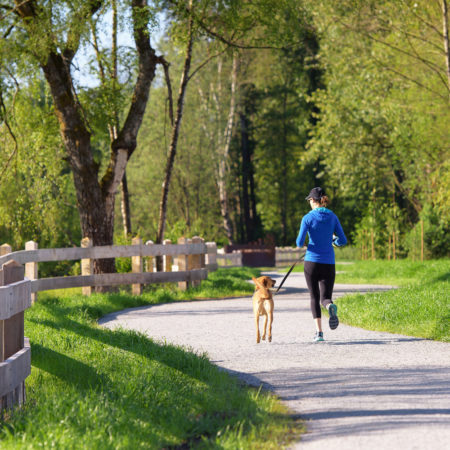 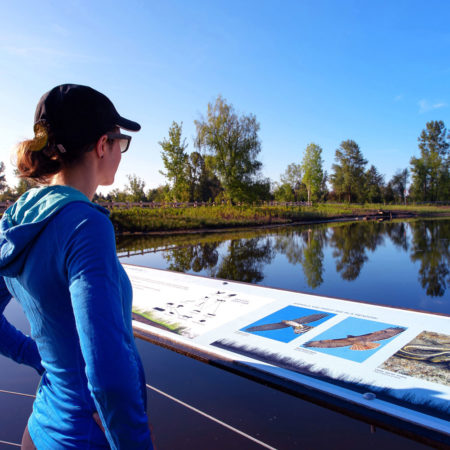 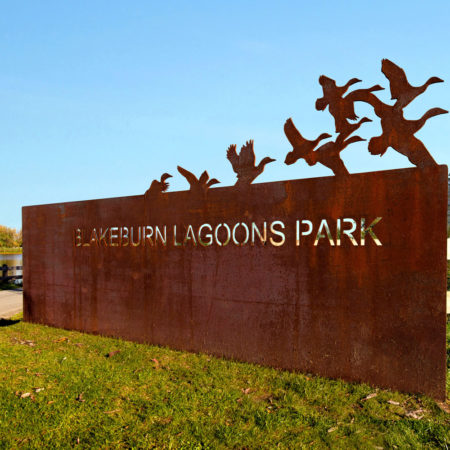 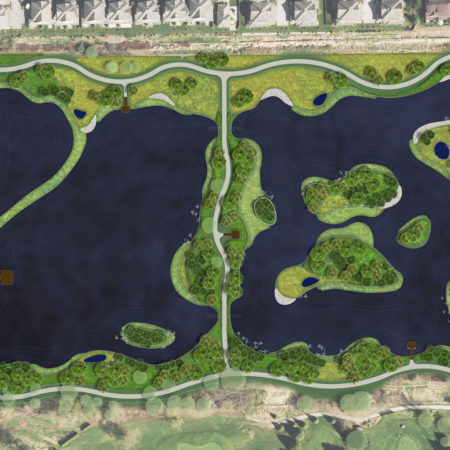 The site’s two engineered lagoons were remodeled into naturalistic wetlands. They were deepened, reshaped, and regraded to create ecological complexity and diverse wildlife habitats. Wetland construction involved 50,000 m³ of earthworks, achieving a cost effective, on-site cut-fill balance. Hydrological improvements included a new municipal stormwater inlet and outlet, and inter-lagoon linkage to facilitate water movement across the site. A stormceptor and a settlement pond at the stormwater inlet, as well as bio-filtration plants in the lagoons, help maintain high water quality throughout the system.

Natural processes were implemented to remediate the lagoon’s sludge. The sludge was mixed with 5000 m³ of imported soil amender. This was placed in areas of the park with no public access, including the lagoons’ shorelines and habitat islands, to provide new plants with a nutrient-rich growing medium. These areas were densely planted with phytoremediators – plants that absorb, stabilize and/or breakdown heavy metals in the soil and water. Fencing prevented public access to these areas. Publicly accessible areas were capped with clean imported soil to prevent public exposure to site contaminants.

Restoration planting included four hectares of over 100,000 indigenous shrubs and groundcover plants as well as over 1,300 indigenous trees while two hectares were planted with native grasses. Planting was divided into six biotopes (wet and dry meadow, forest, brush, emergent, and aquatic habitats), and subdivided into 67 micro sites. Plants varied in installation sizes to increase habitat complexity. Forest and brush areas were planted with a mix of early and late pioneer forest species so the site will eventually return to the Coastal Western Hemlock forest that once existed here.

1.6 km of looped walking trails, viewing platforms and interpretative signage were laid out to optimize public viewing opportunities at the park while minimizing disturbance to sensitive wildlife habitats. The park has become an educational facility for local schools, involving plant installation and wildlife monitoring. Since opening in spring 2018, the park has become a new “hot spot” for Vancouver-area birders, with over 135 bird species sighted there, along with a wide range of indigenous mammals and amphibians. Meanwhile, ongoing monitoring indicates that the level of heavy metals in the lagoon water has decreased significantly from pre-construction levels.

Blakeburn Lagoons Park, through the introduction of stormwater management infrastructure, natural remediation processes, wildlife features and public amenities, offers an engaging and immersive experience of ecological restoration and renewal. It demonstrates how a degraded landscape can be healed and how contaminated soil and water can be cleaned through the restorative powers of nature. 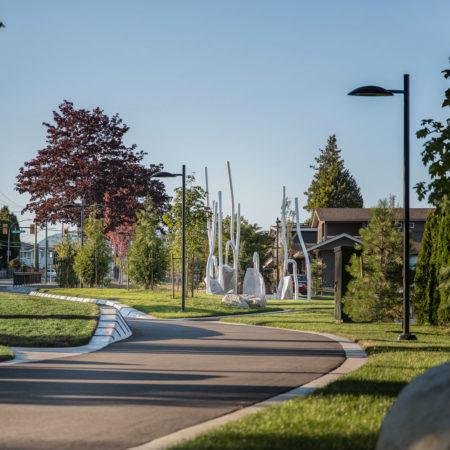