The confectionery factory was founded in 1855 under the leadership of the French businessman Adolf Sioux and his wife.
Architect Oscar Didio chose a non-standard solution of that time for Moscow using red and yellow bricks, three-dimensional embossed masonry walls and arched windows, thanks to which the complex acquired its unique aesthetics and atmosphere.
People from all over Russia came to enjoy this miracle of architecture. Subsequently, the factory became one of the first electrified enterprises in Russia, which was equipped with the latest technology.
In 1913, after the start of production of the Yubileinoye cookies, named after the three hundred years of the Romanovs’ house on the Russian throne, the factory was given the status of “Supplier of His Imperial Majesty’s Court”.
Nationalized after the October Revolution of 1917, in 1924 it was given the current name – “Bolshevik”.
In 2012, the property complex, including three buildings with the status of cultural heritage sites, was sold to O1 Properties.
After the sale, the territory with an area of 5.4 hectares and the premises of the enterprise were transferred to reconstruction for business centres and apartments. The project received the name “Bolshevik cultural and business complex”. A cultural object on the territory of the complex is the Museum of Russian Impressionism.

In the courtyard between the residential buildings, a representative lounge area with a high feel-good atmosphere has been created. Trees and plants promote a healthy climate in the densely built-up area – a well arranged forest situation.
The centre of the courtyard is dominated by four squares bordered by concrete frames, three that are up to 45 cm high and a floor-level one.
Within the squares, another quadrilateral shape is slightly displaced from the parallel orientation. The inner squares are plant beds containing ornamental ground cover plants and 8 trees – Acer saccharinum ‘Nieri’ multistem. It’s leaves are bright from underneath. That is what you see while walking in the courtyard. This trees will lift up the green view to the 5th floor.
One fifth square in the middle is a playground with a climbing wall and a climbing ball made of glued laminated timber with a network of ropes in a pit with wooden chaff.
The flat square is planted with perennials and grasses.
The concrete frames of the squares receive differently sized wooden inserts as benches.
The pavement in the middle of the square plays with the element of the dancing squares. Slightly different coloured natural stone paving with different surfaces continue the playful element of the offset squares. A pattern that is best seen from higher-altitude apartments.
Along the borders of the courtyard in front of the walls or private garden zones umbrella shaped Euonymus alatus ‘Compacta’ were planted – with bright, fresh green leaves, glowing in red in autumn. Between them cube cut Cotoneaster lucidus provide a formal rhythm. Gaps are planted with Hydrangea.
A fire path had to be prepared in the courtyard. Contrasting with the “Dancing Squares” planting strips are softening the fire path. The fire department agreed to drive over the stripes, so that the path could visually be reduced from 4m to 2m. The active contribution of the client has helped a lot to achieve this.
Between the path and its planting stripes a thin drainage line catches the saltwater of the winter maintenance on the roads and paths. Salt is a major problem in Moscow damaging a lot of plants. 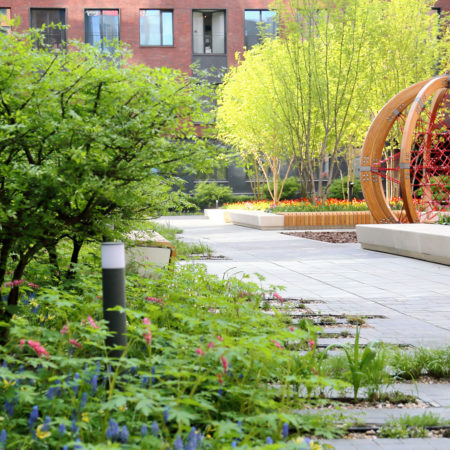 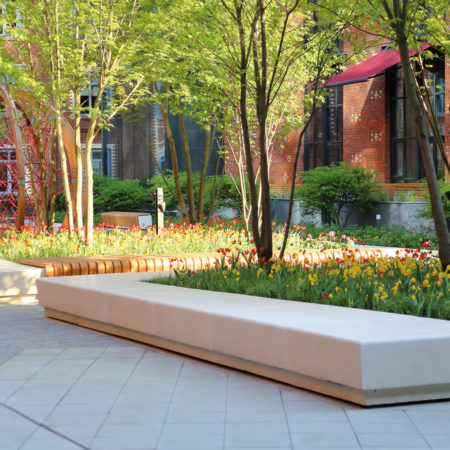 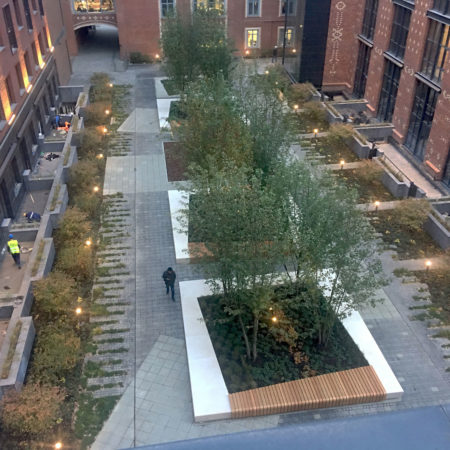 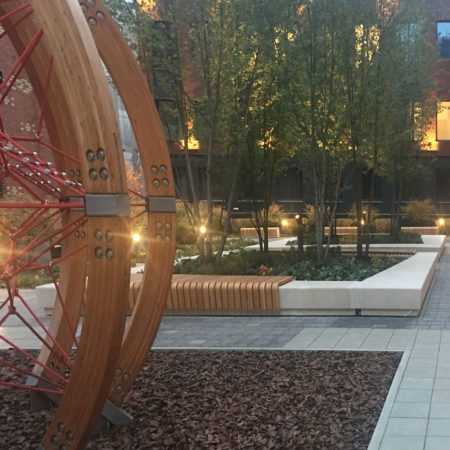 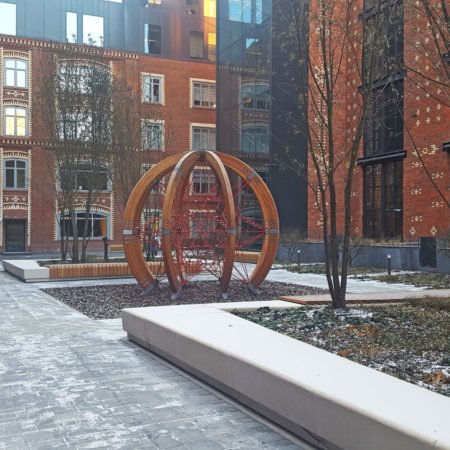 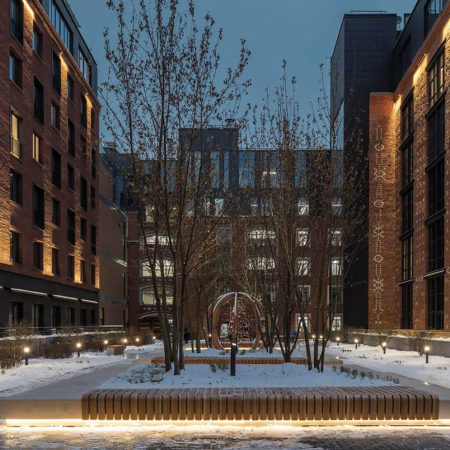 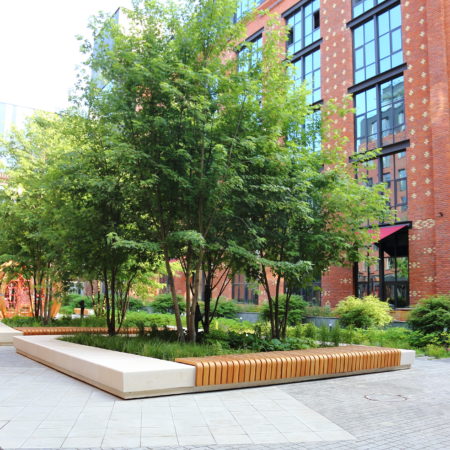 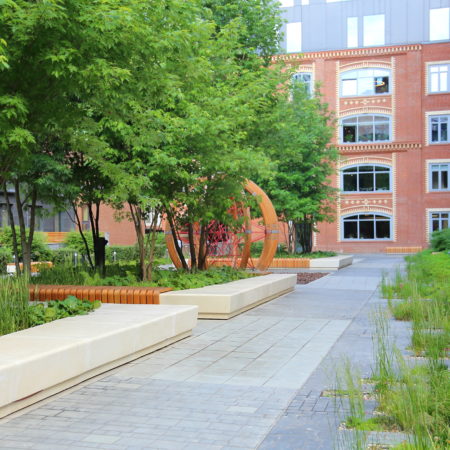 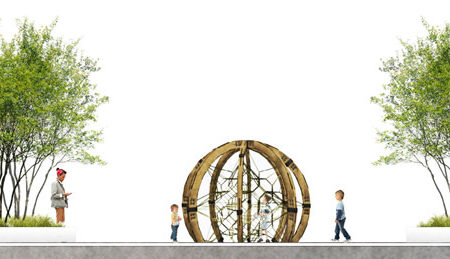 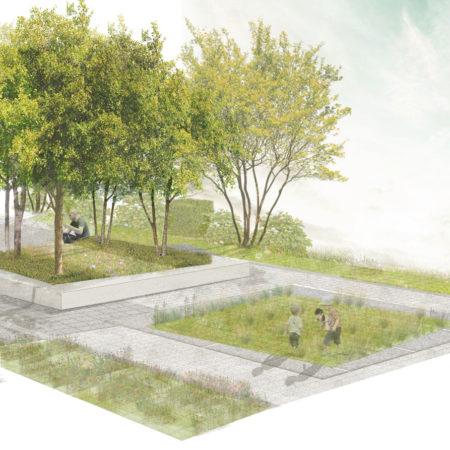 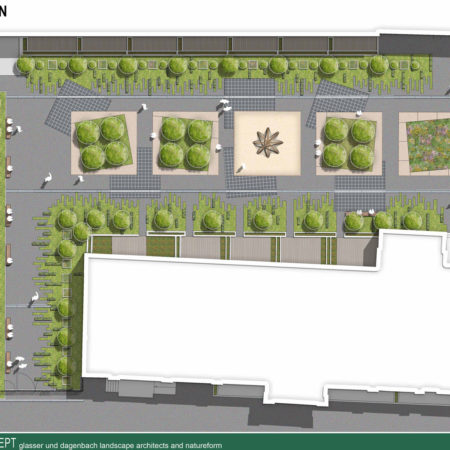 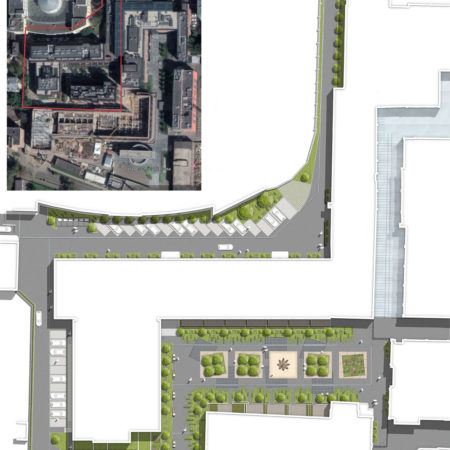 more by glasser and dagenbach 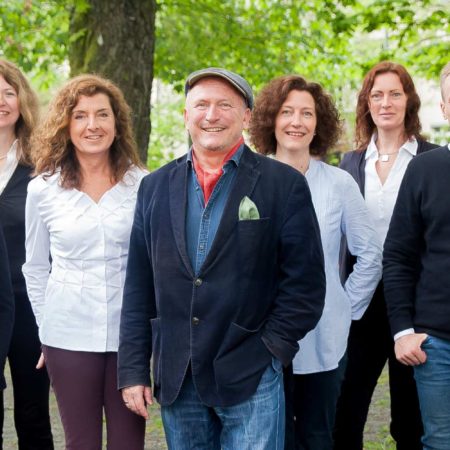