Boulognerskogen is a classic urban park, situated in the Swedish city of Skövde. The park is of considerable size, 14 hectares, and has a long story as a recreational ground; first, for the high society, later, for a broader audience. Boulognerskogen made Skövde a destination in the middle of the 19th century, when visitors from all over the country came here to drink the healthy spa water and cure themselves with cold baths, all in an attractive park environment.

Boulognerskogen is centrally located in the city of Skövde in a landscape situation that forms a wide bowl. The park offers a variety of plant habitats, as well as some topographic drama, and a pond. Originally, it was equipped with facilities of different kinds aimed towards high society living such as a restaurant and a hotel. In the 1930:s the park went through a change and developed into a true volkspark for the growing working class. The park developed into a meeting place, with social gatherings, bodily exercise, midsummer parties and a fire festival in wintertime. In 1933 the pond was constructed, one of the first artificial lakes in the country. Beach life was intense in the summer, and the pond served as a skating area in the winter. The 1930:s was the decade of public health in Sweden. 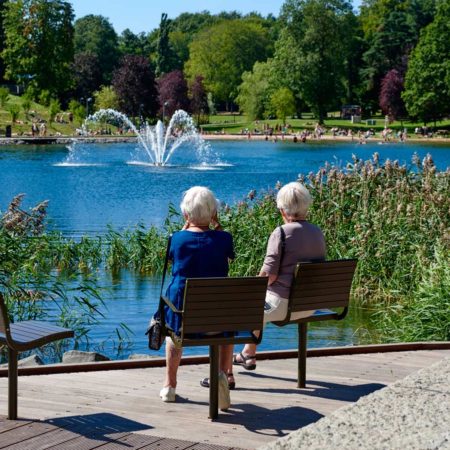 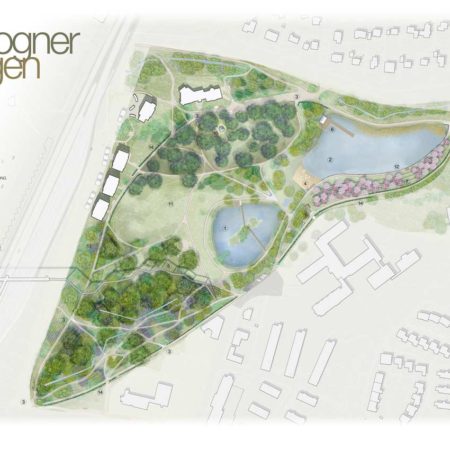 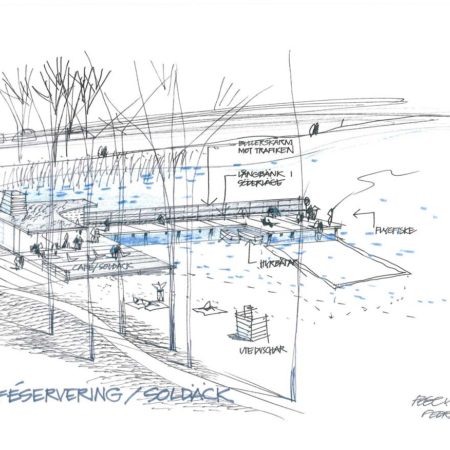 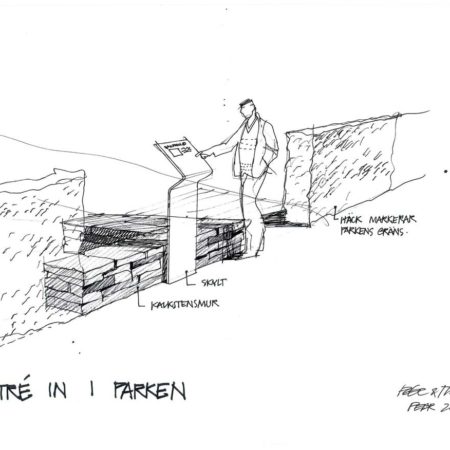 In the 1960s and 70s, however, the park fell into decay. In 1973, the pond closed down for bathing due to poor water quality. The eventually desolated park also got a reputation of being not a fully safe place to visit. In 2011 the city of Skövde took an initiative to restore the park and reinstall some of its old values, combined with new ones. The restoration project of Boulognerskogen began with establishing a design program, including dialogue with the citizens as well as active participation by the local politicians.

In the project, a one-kilometer long beech hedge now encompass the park, giving a border definition, marking the edge. Seven new entry spots have been built, inviting people to enjoy the park. A viewing platform sits right on the east rim close to the elderly people’s home, offering panoramic views of the central area. The major endeavor has been to restore the pond. A sandy beach was designed with a curvy shore promenade as well as a fountain, circulating the water for freshness. The rather steep, west-facing slope was re-graded into a series of long-stretching sun terraces. These have plantings with rows of multi stemmed cherry trees, Prunus sargentii. Today the park attracts visitors taking part in the beach life, whereas other parts of the park host flaneurs on promenade in the semi-shaded environs in the beech grove, watching the spring flowers by the stream, or spending time in the higher, drier areas among the pines.

For the city of Skövde, located on an open plain and with no natural access to water or coast, the restoration of Boulognerskogen has been a transformation that has made park qualities, missing for almost 50 years, come awake.