The site of this proposed house, although scenic, required significant remediation. A four-acre expanse of former agricultural land, it suffered from a history of chemical and pesticide application and was a source of toxic, silt-laden runoff that impinged on the adjacent tidal pond. LaGuardia Design Group and the architect collaborated closely to address these problems and create a handsome residence that is well rooted in the surrounding habitat.

The original site of Bridge House was a 4-acre, vacant piece of farmland fronting Sagg Pond in Bridgehampton, NY. Before locating the proposed house with the architect, the LDG first studied the existing topography of the surrounding area, which revealed a natural rise in terrain adjacent to the pond, creating a tremendous watershed through the project site. Aerial maps further revealed a direct connection between the Pond and the Atlantic Ocean, elevating the importance of mitigating any effects of large-scale disturbance. To deal with stormwater runoff, LDG focused on embracing the watershed and turning it into an asset. 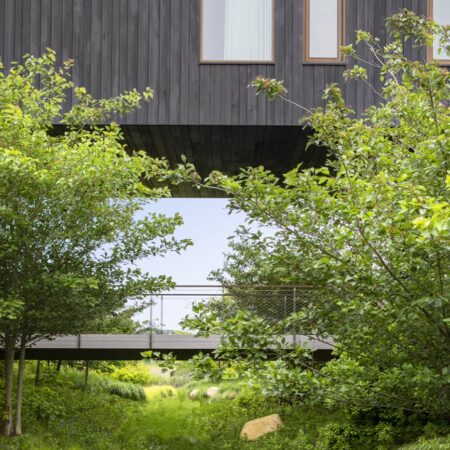 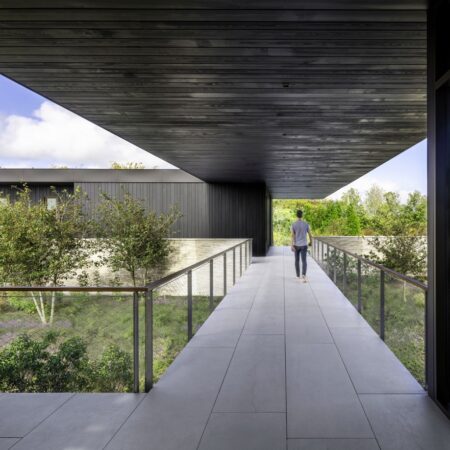 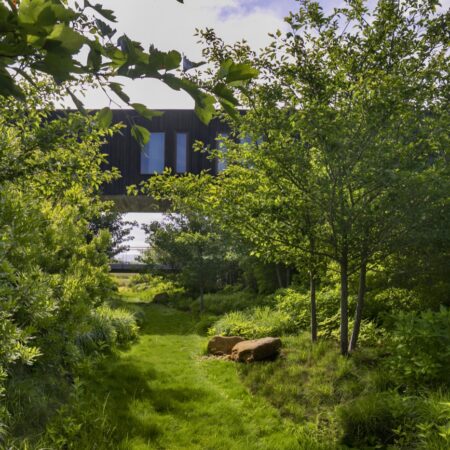 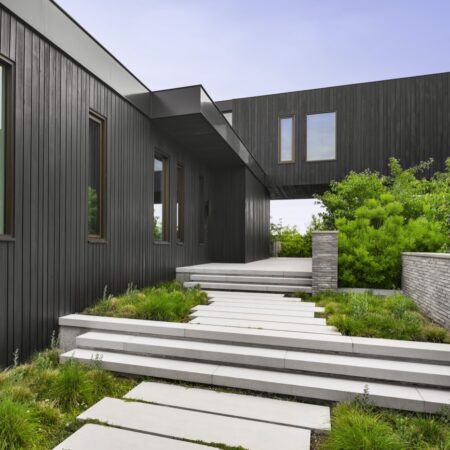 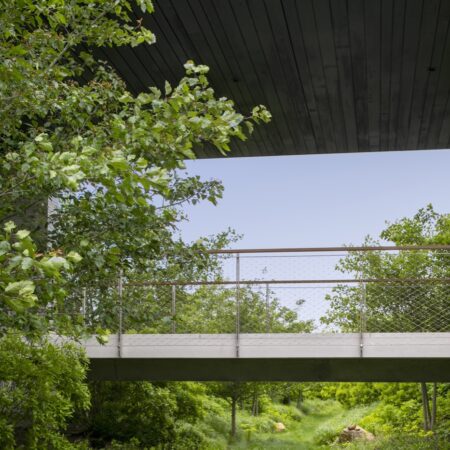 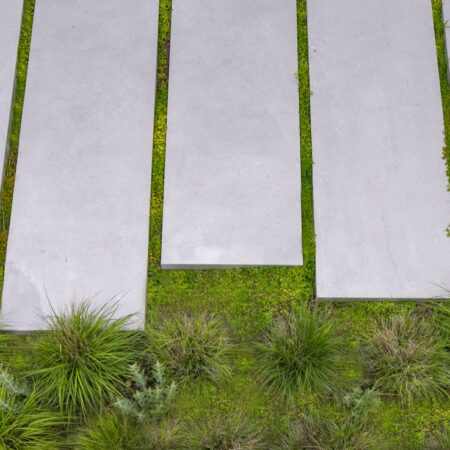 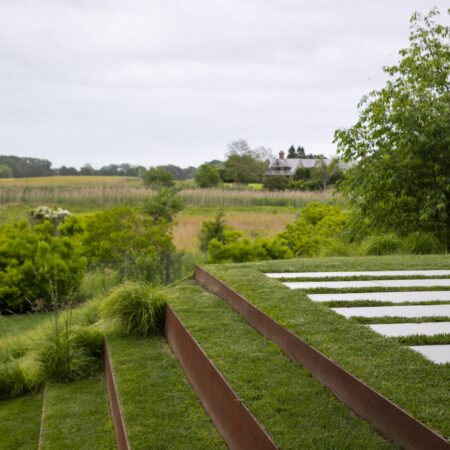 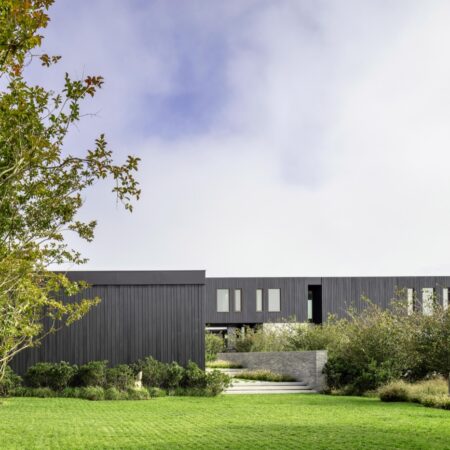 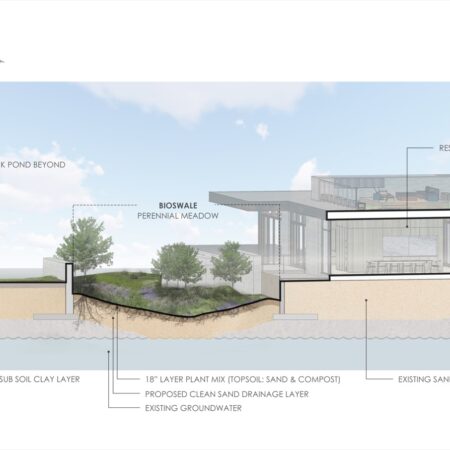 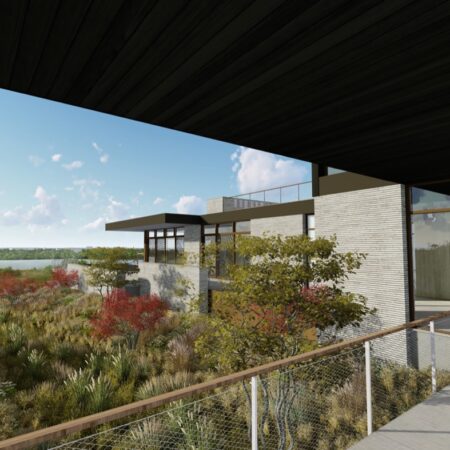 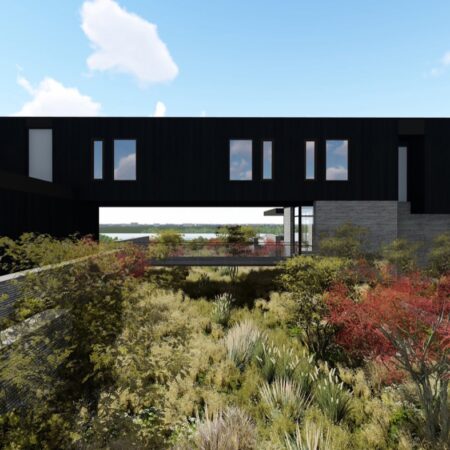 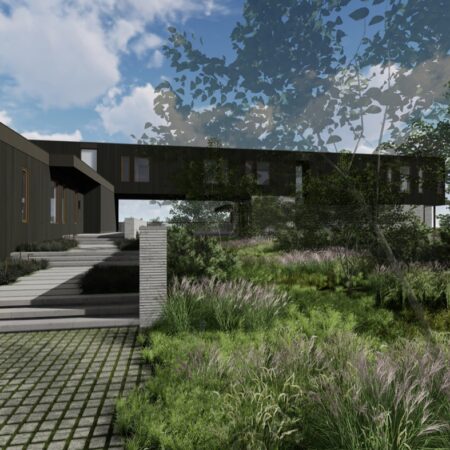 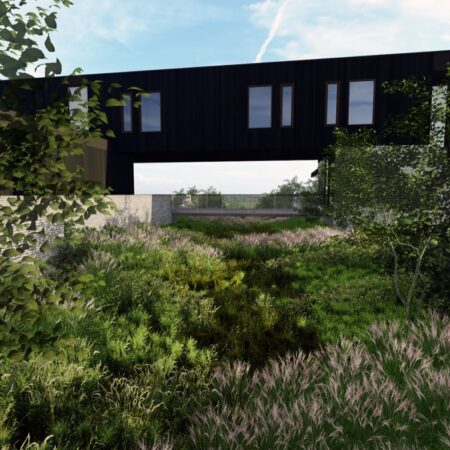 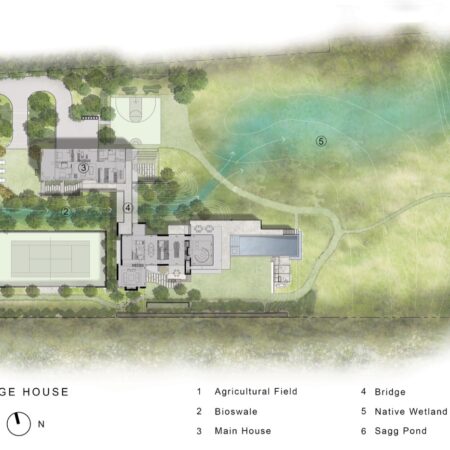 Rather than diverting the water to the edges of the property so that it would run around the house, the design team decided to grade the land so that runoff collected in a central bioswale that would run through and under the house. The upland half of the site was historically plowed as agricultural land, leading to centuries of contaminated runoff. The effectiveness of a bioswale lies in infiltrating runoff into the soil where soil microorganisms can attack and break down pollutants, thus cleansing the water. The absorptive capacity of this bioswale was enhanced by excavating its channel down through the existing clay sub soil and then lining it with clean sand topped with an eighteen-inch deep layer of a planting mix created by amending topsoil with sand and compost. The bio-swale would cleanse stormwater, re-nourishing the Pond and dial back years of neglect. Given the scale of the site, the swale was widened from just the strip between the buildings to the full width of the pond edge for maximum effectiveness. The bioswale became the central feature of the landscape, creating dramatic views and experiences and connecting the house and its landscape visually with the wetland that surrounds the tidal pond.

A bridge was introduced over the swale to the front door of the home, heightening the user’s senses and awareness of the environment. The visual effect of this planting is that of a wild, green “river” even when the weather and the bios-wale are dry. The swale’s plantings are comprised of large grass drifts, which form a base layer of less visually dominating plants that fill the ground plain. Part two of the planting scheme includes more graphically dominant drifts of perennials that move between the grasses and bloom with the seasons, creating an ecosystem for pollinators and wildlife habitat. Year-round interest is generated by grasses with seed heads that stand up through the winter, such as Panicum and Deschampsia. Thickets of bayberry and Native trees, such as shad and black cherry, are used to create pockets of light and shade.  Sedge grasses wind their way down the center of the swale visually revealing a ‘river’. In an effort to slow down runoff, soils were designed to capture and hold water, aided by low weir walls.  Drainage from the buildings, parking and tennis court is captured by the swale and grass block pavers cover the entire motor court to reduce impervious site coverage.  Lawn was used sparingly and restricted to only circulation paths around the residence to minimize the use of fertilizers and irrigation.

Even the parking area was paved with a permeable surface of blocks inset into turf so that the rainwater would soak in rather than run off. Similarly, the path to the house is set with pavers interplanted with steppable groundcovers such as mazus. The path rises as the landscape descends so that by the time the final bridge to the front door is reached, the visitor is up among the tops of the compact, multi-trunked trees, enjoying an uninterrupted view. Bridge House re-interprets the use of a traditionally commercial mitigation measure on a residential level to impact big change in the health of our waterways.

Architecture offices involved in the design (if any): A+I Architecture 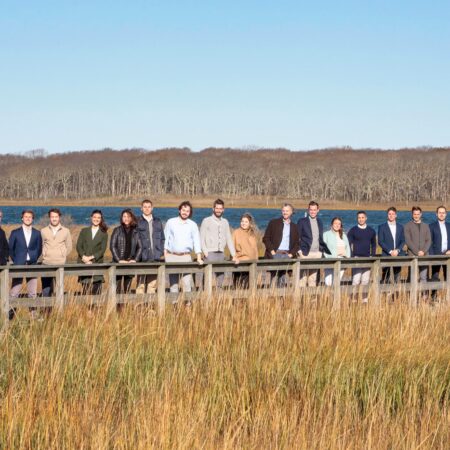 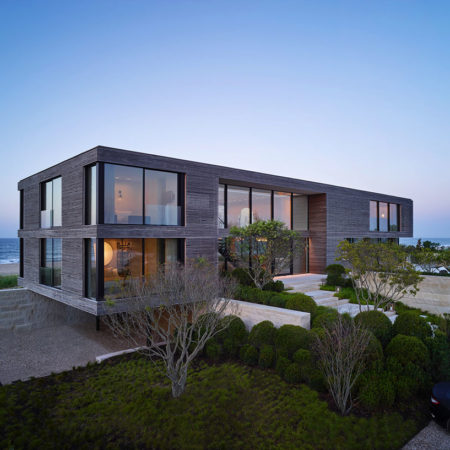 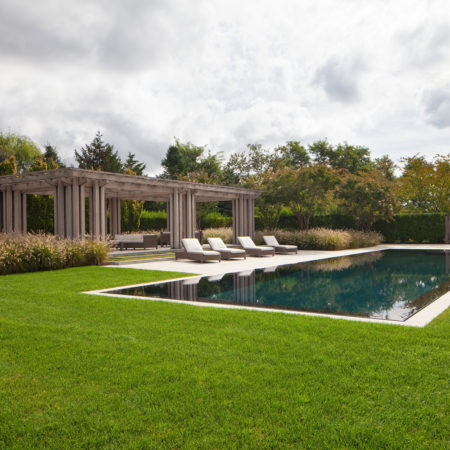