BRYUM primarily operates in an urban environment between conceptual city development and object planning in public space. We address developed as well as undeveloped landscapes. Besides meeting architectural challenges, we further elaborate interventions with interdisciplinary teams that weigh and mediate between different needs and create visions. Our aim is to design landscapes that provide a foundation for temporary interactions and, thus, constitute a comprehensive urban living environment. We pursue the conceptual advancement of public spaces as open and social areas. The term `urban interventions` signifies the active search for interdisciplinary developmental approaches in open spaces to establish room for functional purposes, everyday life and to participate. Thereby, our work focuses on the implementation of our findings during the entire work process from planning through to the realization of projects.

Urban interventions are instruments for a process-driven city development. Rather than merely shaping the built environment actual planning and communication processes are designed. With temporal utilizations of public and semi-public spaces contrasts are created that act as inspiration to acquire the environment. Thus, the mutual and everyday space and its potential as room for socialization is promoted. Thematically the interventions are caught between urban development, social animacy, art and landscape architecture. For one thing, urban interventions serve as basic research to assess the usage behavior of public space (field experiment). Then again, temporary interventions or partial realizations imply and initiate possible developmental purposes in the real space. Thereby, acceptance and potential conflicts are revealed (allergy testing). Urban interventions also serve as messengers or promoter for an active participation of the population. 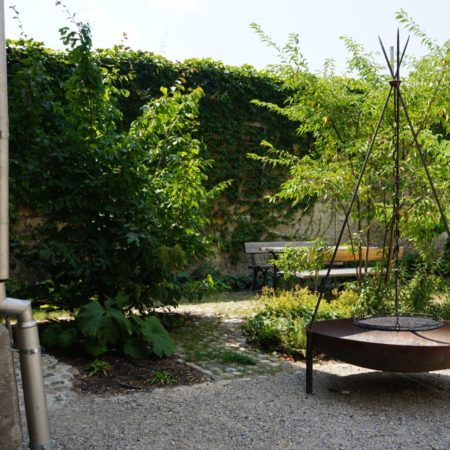 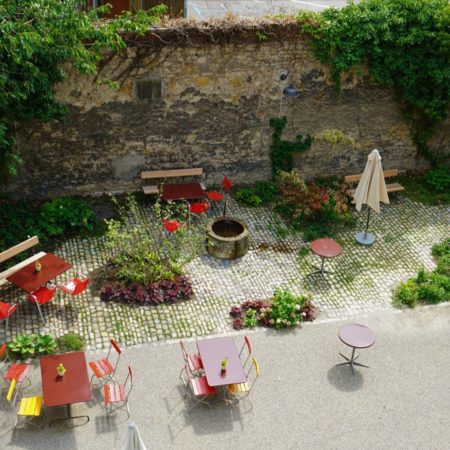 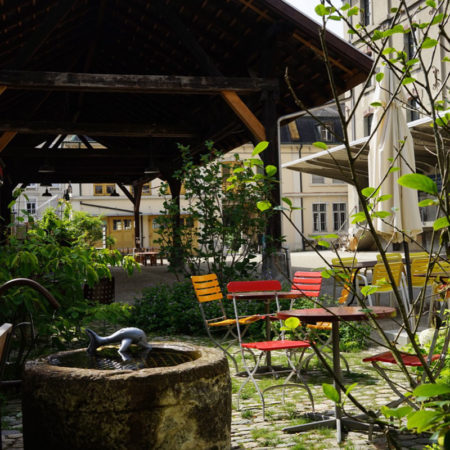 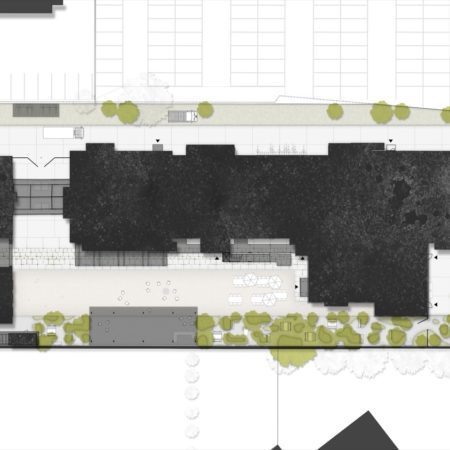 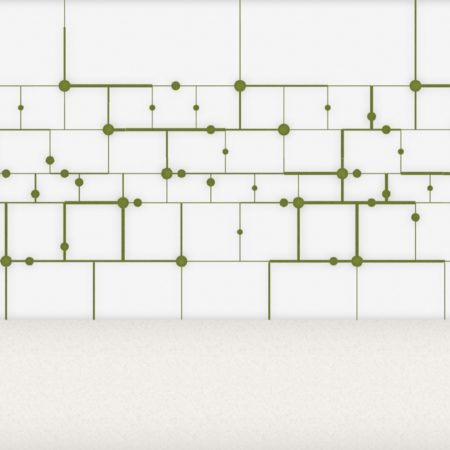 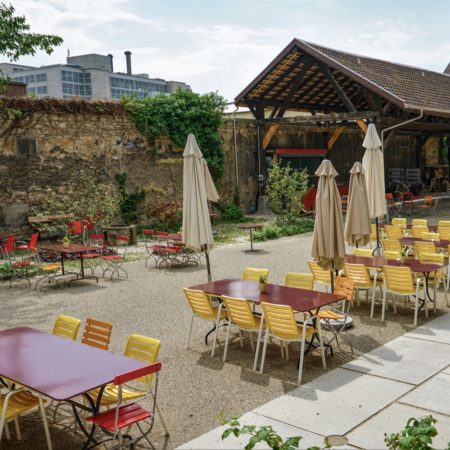 Shortly after the re-opening of the historical industrial building from 1898 the `Aktienmühle` evolved as a stamping ground for the young and elderly in the district. Numerous artisanal enterprises, visitors of the restaurant and bar `Turbinenhaus` as well as young playground users not only enliven the architecture, but also the outdoor space. In a district which will change a lot in the next years the `Aktienmühle` and its open spaces provides an anchor for a sustainable district development in the `Klybeck`.

A former industrial building as anchor for a sustainable district development – The outdoor space refers to the historical meaning of commercial construction and creates robust and multifunctional areas for diverse handcraft businesses and their delivery. The work yard in the east of the area serves as an interface between the various users and can be utilized individually by the handcraft businesses. The functionality of the open areas as working room plays a superior role. The central square in the south is accessed via the gatehouse. Perforated concrete panels create an identity-establishing pavement and lead visitors and tenants to the macadamized space which is occupied by the adjacent gastronomy in the summer months. The so-called dynamic stage provides room for events like the `Mühlenfest`, weddings or exhibitions of the handcraft businesses all year round.

Snuggly green between industrial charm – Contrary to the solid and industrial areas around the building a green space along the existing mural in the south generates a haven for the district. Present elements like a restored wooden shed are incorporated in the lush vegetation. Boulders and greened joints represent the proximity to the river Rhine and create – together with the planting – a pleasant micro climate on a former industrial area. 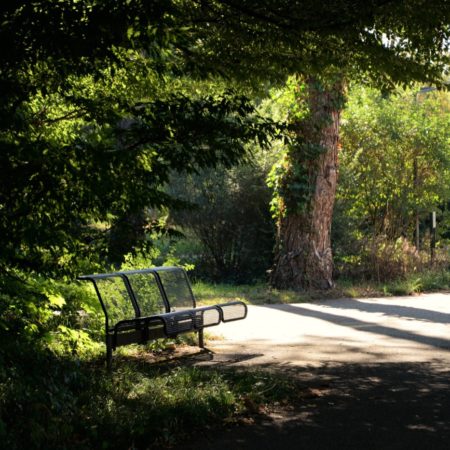 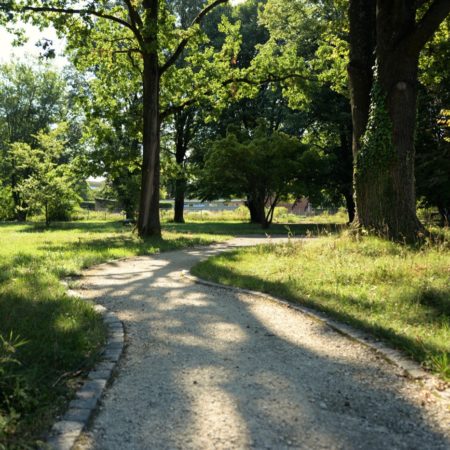 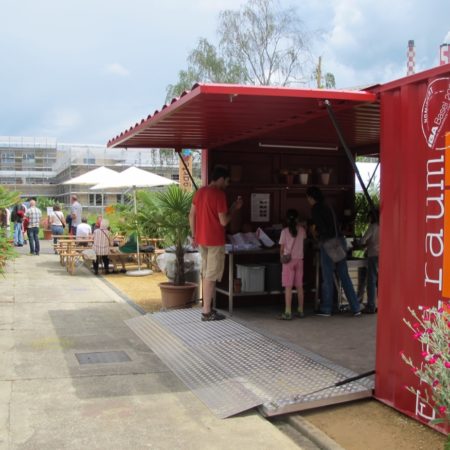 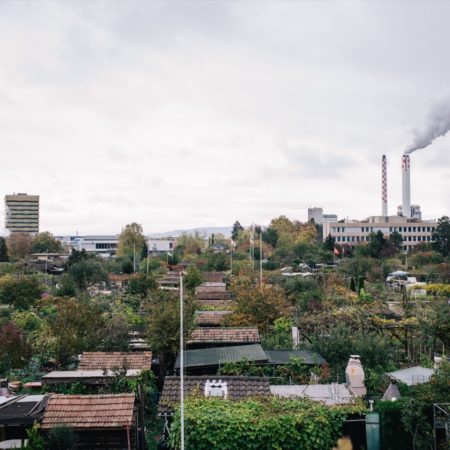 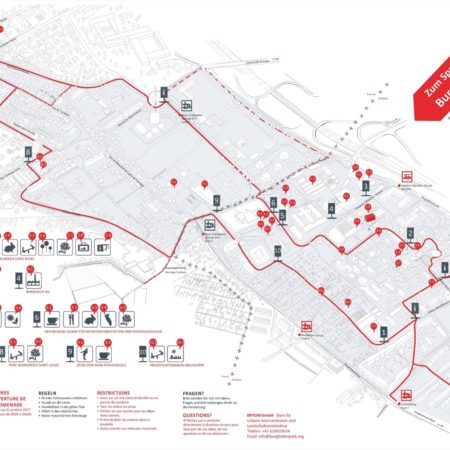 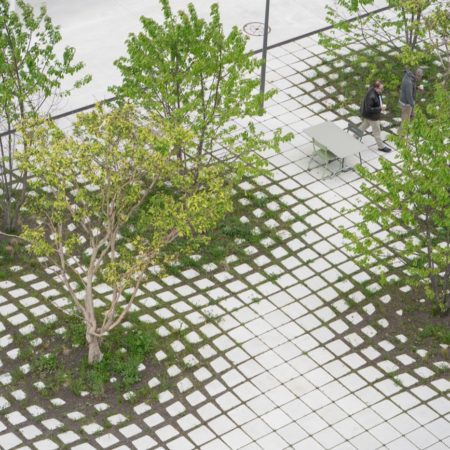 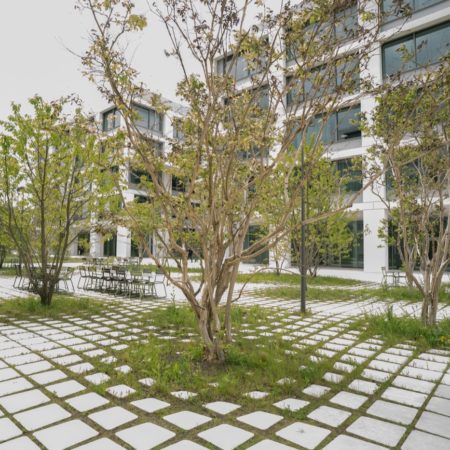 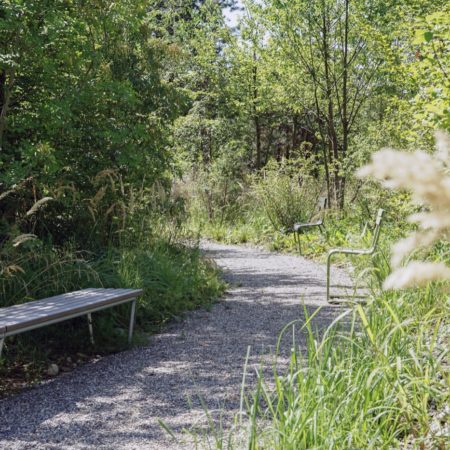 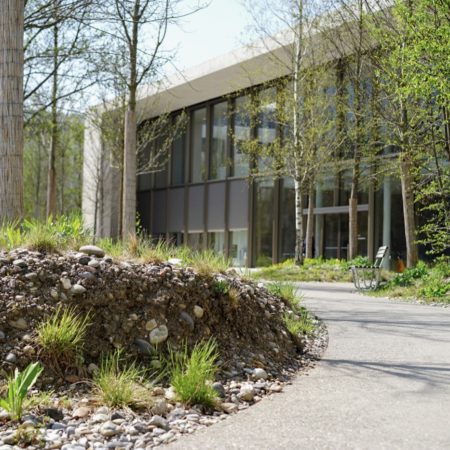 Close to Basel the site Kaiseraugst of the globally operating pharmaceutical company Hoffmann-La Roche Ltd. is located in the lowlands of the Rhine Valley, surrounded by the Black Forest, the Vosges and the Jura mountains. Amidst a region full of history and culture an ecological network system between diverse environments is developing. BRYUM landscape architects were a leading part of the team responsible for designing the master plan. The office is responsible for the open spaces, public Parks, streets and squares of the 65’000 m2 large Area. Parametric Design – One of the central squares in the Site is the home of the company’s information technology division. The paving design is generated using automated algorithms based on the estimated pedestrian flow, seating areas, and tree positioning. The computer software tool used to generate the pattern has been developed exclusively for this project. The formwork for the cast concrete paving elements where milled by Computerized Numerical Control CNC. The project is a groundbreaking implementation of parametric design in Landscape Architecture. Ecological everyday – A park as large as five football fields, comprising 1100 trees and 80 000 shrubs, situated on top of a two-story underground parking – in 2017 the premises of Hoffmann-La Roche Ltd. in Kaiseraugst gained a new ecological centerpiece. 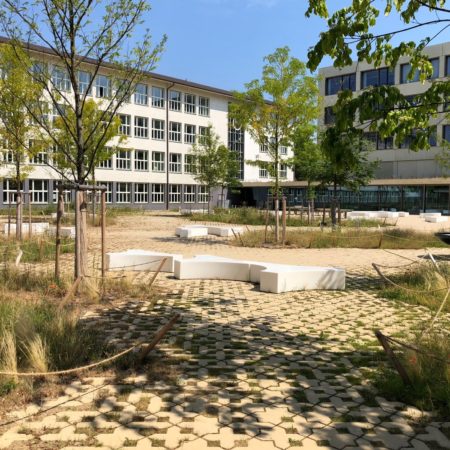 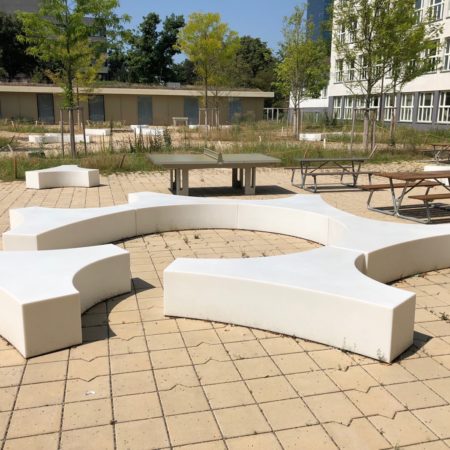 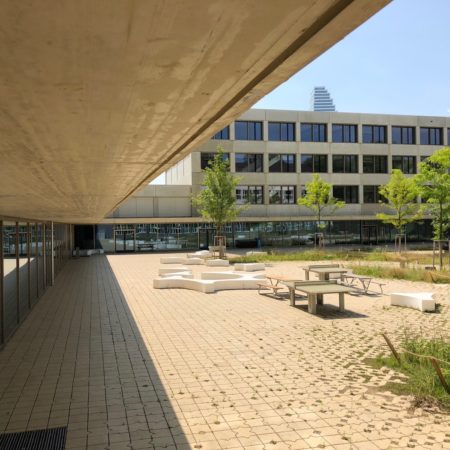 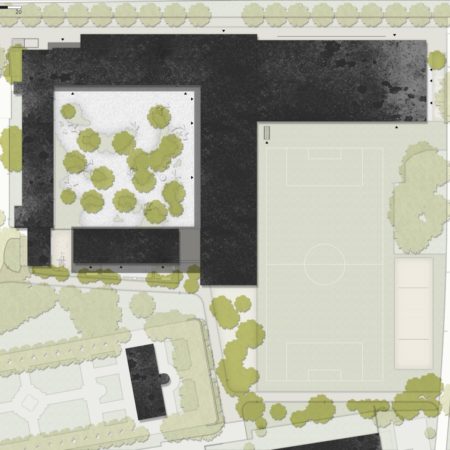 The urban placing of the new building into the existing and partially listed school landscape required a reorientation and reorganization of the outdoor space. Functional spaces like a new sports ground, play corners of the preschool or performative and user-orientated places like the central schoolyard within the school buildings create a complex school and learning environment amidst a historical and urban development structure for up to 570 students.

Enhancement of a listed school building in urban context – The position of the new school building in combination with the existing building generates a generous schoolyard which is closed to all sides. The multifunctional open space concept consists of a perforated pavement which includes tree plantations. Single elements within the open space like portable seatings allow the students to individually utilize and adapt the schoolyard according to the studens’ demands during everyday school life.

A performative schoolyard for creative minds in the morning – The concrete panel system was specifically developed for the schoolyard and designed to guarantee natural infiltration of rainfall while providing high levels of sealing. While the pattern dissolves towards the planted trees there are frequent areas that are not affected by the dissolution and ideal for ball and catch games. Extensively greened recesses as well as smaller plant islands create a segmented schoolyard with spaces of diverse sojourn qualities and ways of utilization.