Buro Harro is a small office that thinks big. Based in the forests north of Arnhem (Netherlands) we focus on a wide variety of landscape- and urban projects and issues. Whether it is on the scale of coasts, housing projects, city parks or private gardens: we address big themes in clear statements and design. Biodiversity, sea level rise, climate change, food, the future of cities, shrinking areas, the way we want our living environments to look like, rainwater management, erosion, urbanisation. Even in the smallest projects we want to come up with solutions for big issues.

It’s the love for real landscapes that drives us – natural and cultural. The heather fields and forests that surround us, rural landscapes, native vegetations, orchards, seascapes but also fascinating urban typologies, spaces, housing areas where you feel at home – or maybe always on a holiday. Not the surrogate-landscapes often referred to as ‘green’ (just a colour). Not the overdesigned stuff you might find ‘interesting’ but doesn’t touch your heart.
Just like restaurants that put real food on your plate, from animals that had a good life, tasty tomatoes from their own garden, mushrooms from surrounding forests and fish freshly brought in by their fishermen – we want to put real landscapes on your plate. So we look for the best local products, we harvest vegetation from the landscapes we work in rather than using industrially nursed and looking tree-clones. We research techniques to create the most natural, pure vegetations. To make real landscapes we find ways to let nature work for us, do interventions that nature (wind, tide, plants, animals) can build upon and so reinforce coasts, positively change the weather, shape a valley or create vegetations merely by creating the conditions. We want to give the users of our landscapes that real experience, that uncomplicated feeling of being happy in a place that feels right, brings back memories and is not about us as designers. Feel-good-landscapes. But not just because they look good.

We want to solve real problems in an integrated way. By understanding rivers, seas, plants, animals, landscape processes and human behaviour. By bringing men and (the rest of) nature closer together. By seeing the city as a man made ecotope, with immense undeveloped potential for flora and fauna. By being positive.

Together we are strong. We believe in the power of many: in all humans as potential nature developers, but also more in general: together we make the landscape, and almost nobody deliberately wants to make the landscape uglier. So, in order to reach out to all the landscape makers, to show them the recipes of our landscapes and to explain how to ‘cook’ such landscapes with the means within reach, we wrote a prize-winning landscape cookbook. To make a difference, we share. We teach, we lecture, we write. To make people eat better you shouldn’t just cook for yourself, you should write cookbooks. To write cookbooks, you should cook. So we design to publish, and research by design.

Dissolving artificial barriers also means we are not stopped by traditional boundaries of work fields. We initiate and develop our own projects. We want to fix things that concern us, no matter what or how.

So, big themes in an office that’s small on purpose: it’s not the quantity of projects we are interested in, but how meaningful they are. To our clients, the citizens, the other animals, to plants, to our climate, our landscapes, to us, to you. 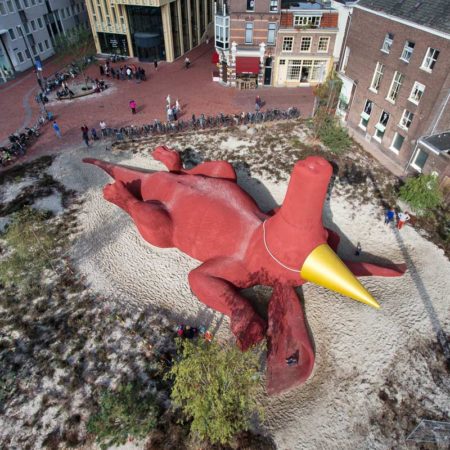 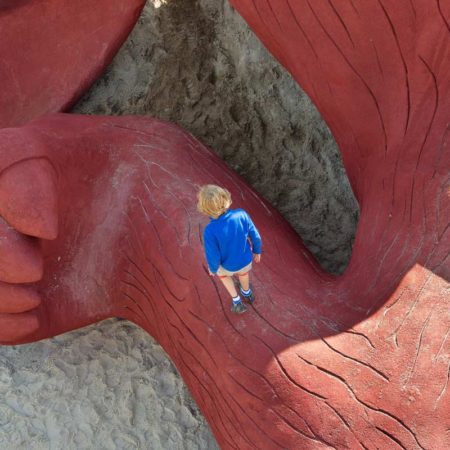 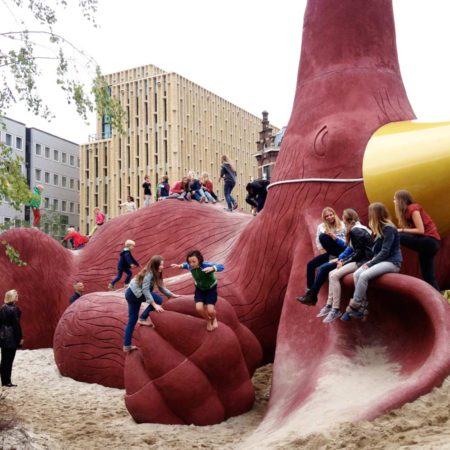 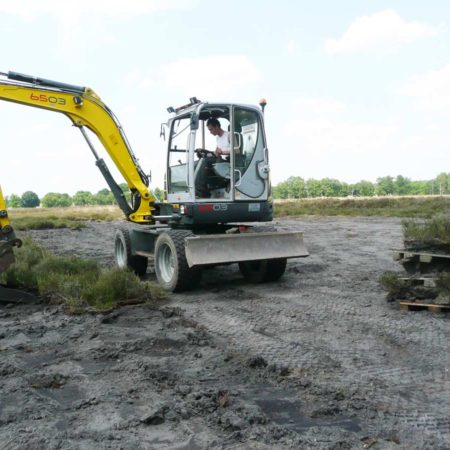 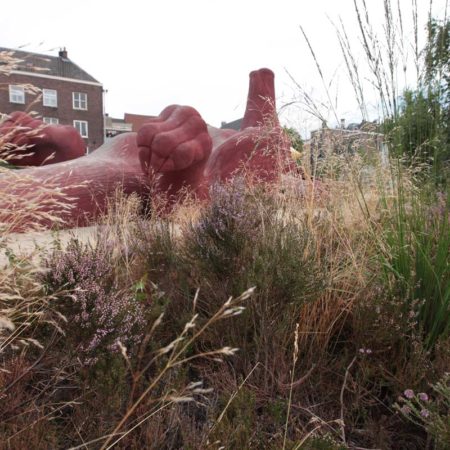 A former wasteland in the centre of Arnhem (Netherlands) is transformed to an iconic park: A flourishing heather landscape with a huge PartyAardvark (an artwork by Florentijn Hofman) lying amidst of it. Together with office D.T.O. we took the initiative to transform this desolate area – due to the economic crisis – to a patch of spectaculair nature in the city. The Bartok Park is a symbol for Arnhem: a city that is uniquely situated on the edge of the Natural Park the Veluwe, but doesn’t seem to take much pride in this fact. The vegetation is transplanted from that Natural Park into the city centre: we brought nature literally to the city.

This new form of nature development (transplantation) has never been applied like this in the city. Second hand nature (to develop the heather is has to be removed from time to time) thus can be used in a city park the way the city park once was meant to be: a real nature experience in the city. Cheap and exciting.
The artwork of Florentijn Hofman, a huge statue of an Aardvark, is a gift from Burgers Zoo to the city of Arnhem and attracts many (young) people to this former black hole in the city. ‘The happiest square of the Netherlands’, changed a non-place to an area developers started investing in, made a theatre turn around – with it’s entrance towards the park – and gave a boost to surrounding shops and bars. Therefore the Bartokpark won the ‘Golden Phoenixs Award 2015’ for urban transformation. 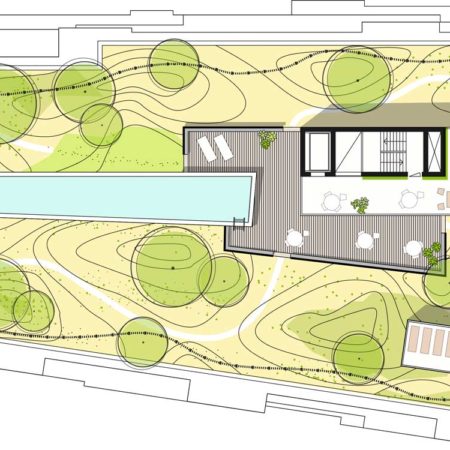 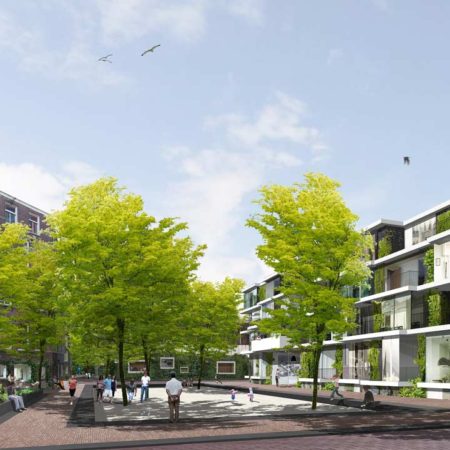 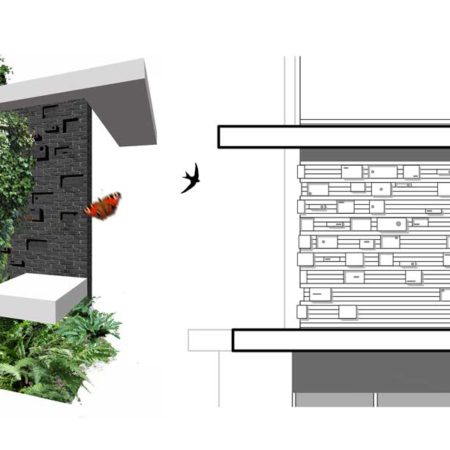 An apartment building for people, birds, bees, bats and butterflies! At Amsterdam’s Groenmarkt a truly nature-inclusive construction will arise. Together with architects Ronald Janssen and Bastiaan Jongerius we designed a building that turns the traditional Amsterdam building block inside out. The unexpected green worlds within those building blocks and their irregular backside facades have now been integrated as the front facades. The brick parts of these facades are designed to be simultaneously overgrown and inhabited by animals; hundreds of animal apartments will be part of the dynamic facades.
On the roof: a spectacular dune landscape where you can swim in! As the wind always blows high up in the sky we have brought in the best-fitting landscape for that windy circumstances: the dunes. A salty swimming pool in the middle of those dunes gives a nice contrast between the rigid and the natural shapes. The salt that will clean the water helps to revitalize the typical dune vegetation with every splash in the pool. The green house and wooden deck terrace provide space for residents to work, relax and have fun. Or grow plants. The noise of the city resembles the rustling of the sea. Now you no longer have to leave Amsterdam to go to the beach. People, plants and animals will really come together in this building, downtown Amsterdam.
Construction planned in 2017/2018. 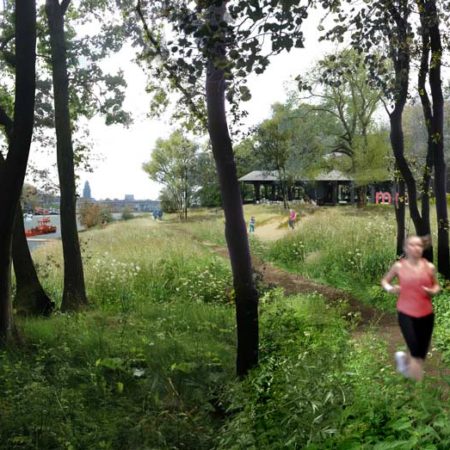 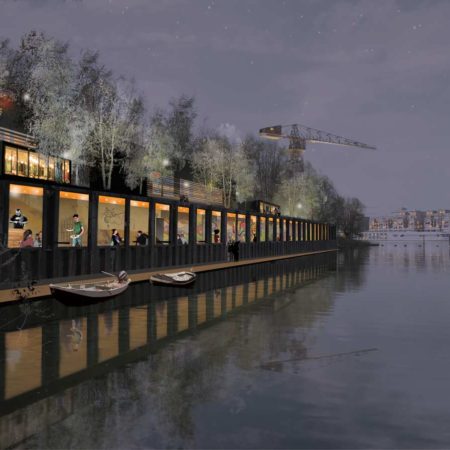 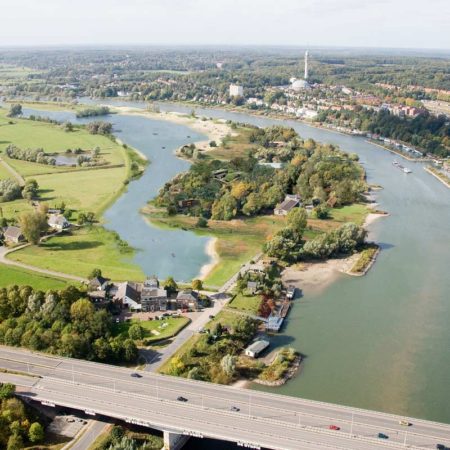 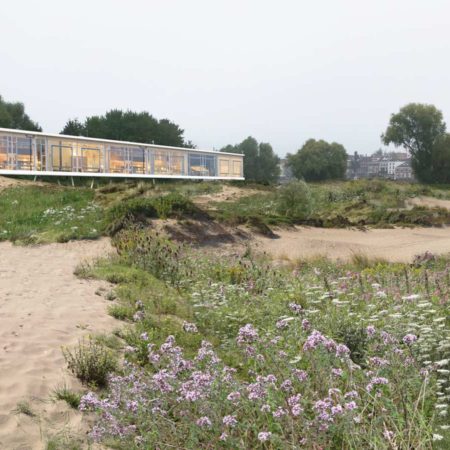 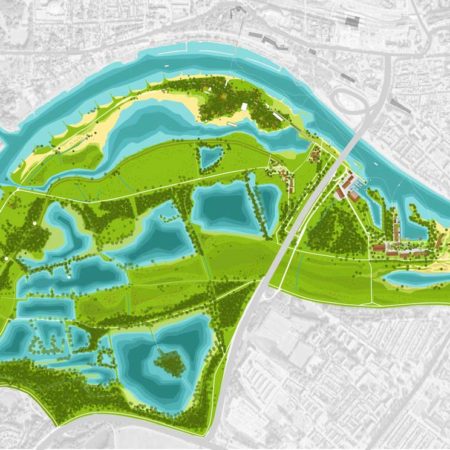 A new river branch transforms two former industrial areas in the riverbed of the Rhine in the centre of Arnhem into very different islands. For more than 30 years plans have been drawn for this area, no one succeeded. The former brick-factory still prevents accessibility of the riverbank and blocks a relation between city centre and the splendid lake district Meinerswijk that spontaneously developed. From the former shipyard –Stadsblokken– only the two harbours and the building fundaments remain, well known by drugs-dealers and street racers, but forgotten by the people of Arnhem, hidden by the spontaneous river shore vegetation.
The existing qualities were the starting point for ‘The Islands 2.0”, commissioned by the developer who owns half of the 300 ha big area. The harbours- with their scarce industrial remains like a 85 meter long shipyard gallery that will be turned into a restaurant. The spontaneous vegetation- that overtook the area except the concrete slabs, where new multifunctional building blocks are planned. And the terrain of the former brick stone factory, which will be turned into a forested island with sandy beaches by creating this new river branch that allows more water to flow through the Rhine, and the citizens to swim. The ’80 industrial halls will be removed, interesting buildings become cultural places and exclusive, sustainable houses will be added in low densities as architectonic enclaves embedded in the publicly accessible natural environment. 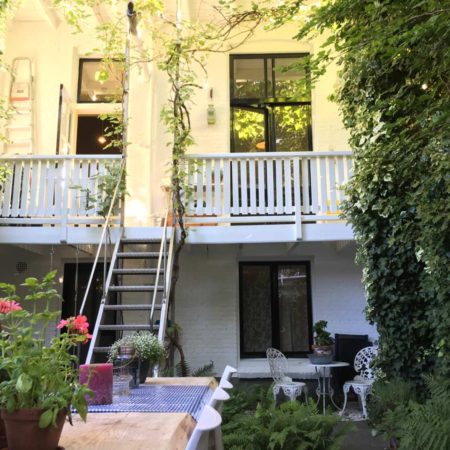 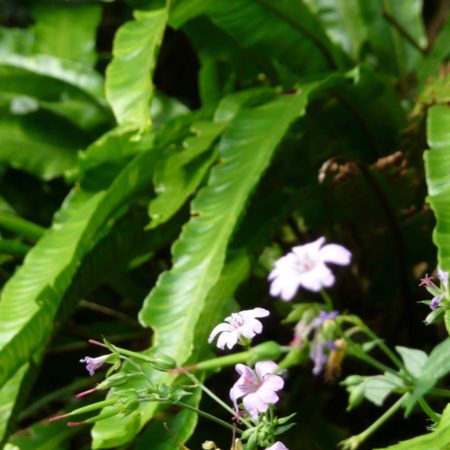 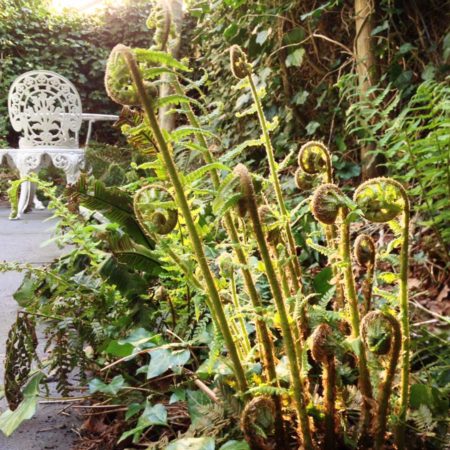 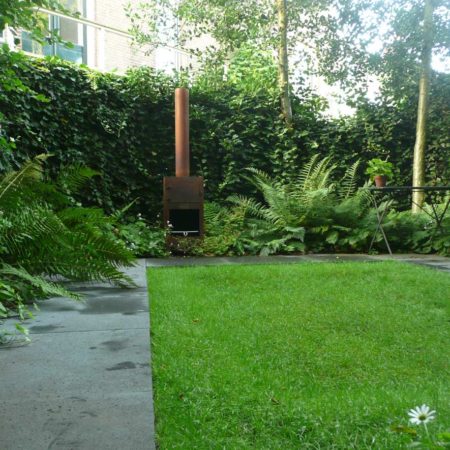 This small shady garden is an unexpectedly piece of nature. Here, plant species of the so-called Red List of endangered or extinct forest-species grow abundantly. Surprisingly, most of these species are simply for sale. From this natural garden the endangered plants can spread all over the city. With its extreme, man-made, varied circumstances of artificial rocks and endless hedgerow landscapes, the city offers opportunities for all kinds of rather picky plants that have become rare outside the city. So what if we actually start exploring those opportunities? What if the billions of citizens who invest hundreds of hours and hundreds of euro’s every year in their gardens start to think of themselves as possible nature developers? That’s what this garden is a manifesto for.
The layout is rather simple: a small human enclave in the abundantly wild green surroundings. Through the last years the garden changed from a 2-person garden with a lowered square of grass in the middle, into a biergarten with a big table for friends- and family dinners. The challenge in this tiny garden was how to deal with the shade of the 5 existing trees. By stretching the terrace to full length and moving it towards the edges of the garden you can sit in the sun all day. Surrounding the quadrate a gently sloping border full of (rare) forest-plants continues smoothly into the totally leave-covered garden walls. Together with the existing trees they make the garden a rare, evergreen oasis. 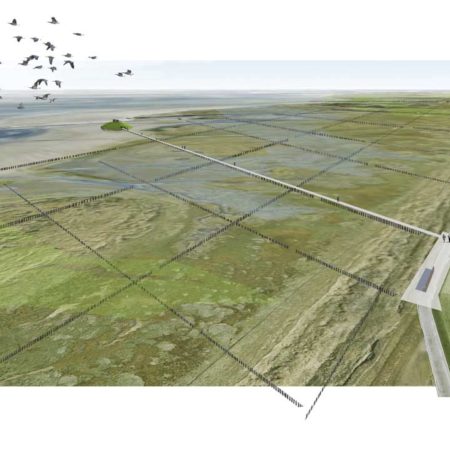 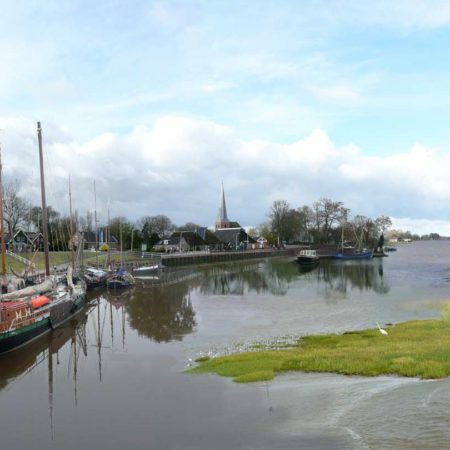 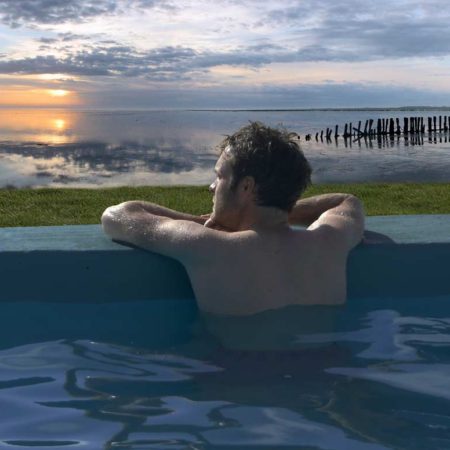 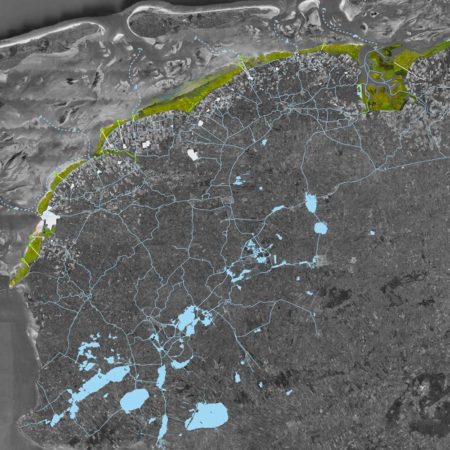 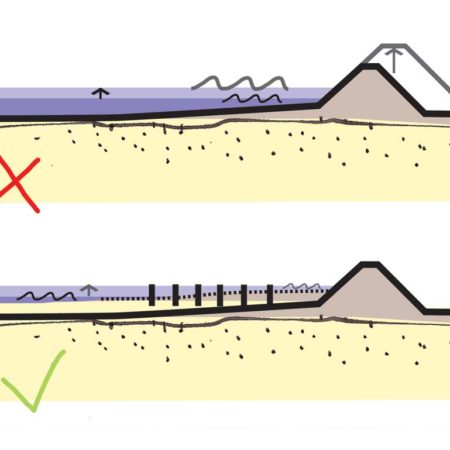 Northern Friesland feels like the end of the world. The hard dike disconnects Friesland from the Unesco World Heritage Wadden Sea, making northern Friesland an area to pass through, not a destination. Result: a landscape of degradation and shrinking villages.
We saw the assignment to protect Friesland from the ever-rising sea as an occasion to revitalize the region. We took one of the most unique but also mainly disappeared qualities of the coast as a starting point: the tidal marshes. These marshes are not only ecologically very valuable, they are also beautiful, empty, rich and tasty. Besides; the marshes break the waves coming in from the sea, reducing the pressure on the sea dike: an excellent coastal defense system.
By adding marshes, the necessity for strengthening the sea dike disappears. Hard and soft structures that calm down the water accelerate the natural process of seabed rising, resulting in marshlands. The result is a magnificent coast, for nature, residents and tourists. From the end of the dams you can experience the size and emptiness of this landscape at it’s best.
The third step is to connect this new coast with the rest of Friesland -famous for its lakes and water network- by restoring the connections between this inland water system and the Sea. Former coastal villages (like Holwerd, currently in progress) will become coast-villages again. The region becomes an intermediary between the Wadden Sea and the Frisian lakes: Friesland is once again at sea.