Situated within a World Heritage Site, Calton Hill encompasses the redevelopment of existing listed buildings – The City Dome, The City Observatory and Transit House as well as a new Contemporary Art Gallery and Restaurant within the 1818 Playfair-designed City Observatory.  HarrisonStevens worked with the joint clients Collective Gallery and the City of Edinburgh Council to develop a design including a site wide response to the journey of visitors to the new attractions.  This commission included horticulture within the diverse planting beds, with an emphasis on low maintenance and native species.  The existing route through the observatory was redefined and graded to become fully accessible, use of steps was minimised, while retaining walls became a significant part of the proposals defining the sequence of spaces across the steeply sloping site on top of one of the Cities seven hills.  The Design Solution established the site within physical and historic contexts, whilst also recognising ambitions to develop a world-class contemporary space with a unique sense of place, reaching an international audience. 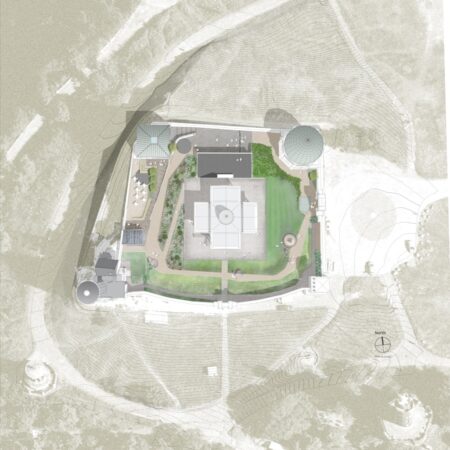 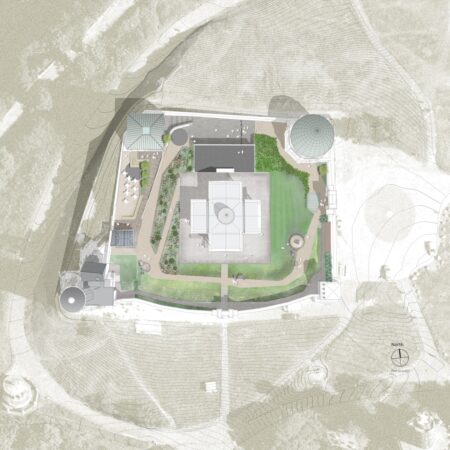 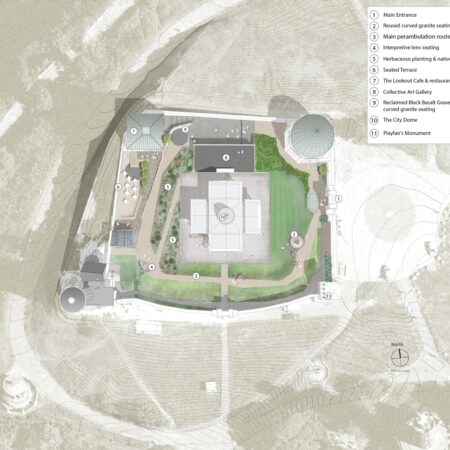 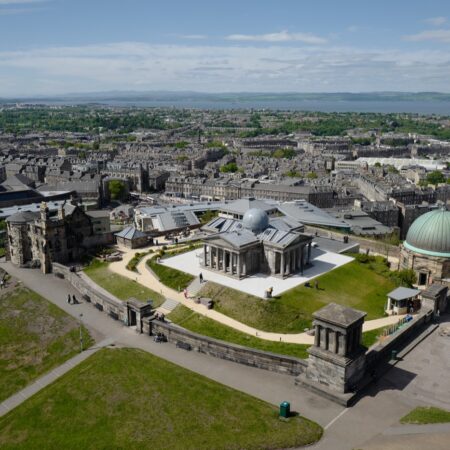 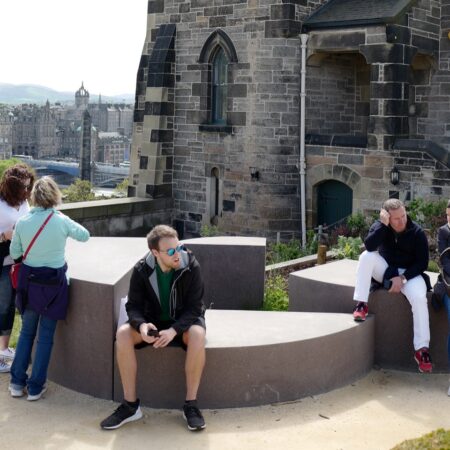 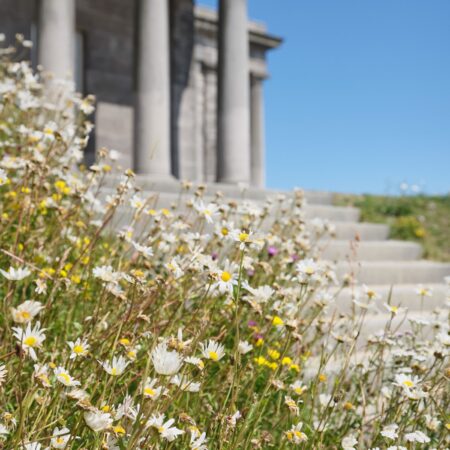 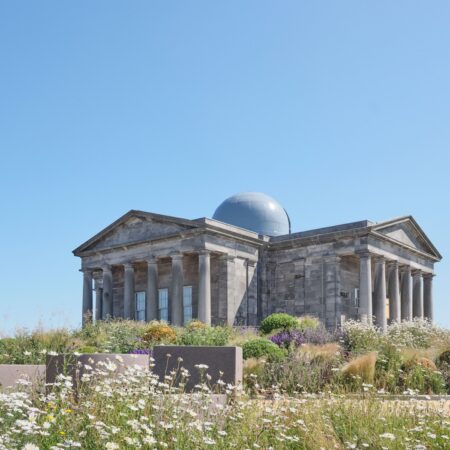 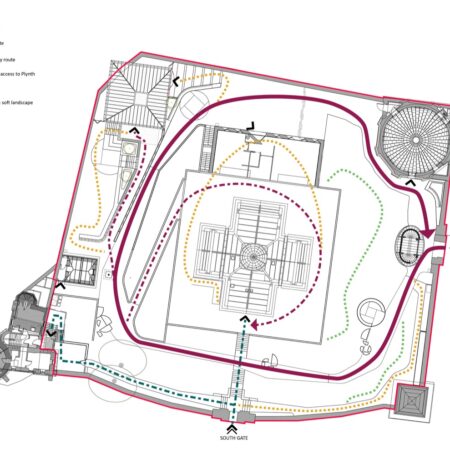 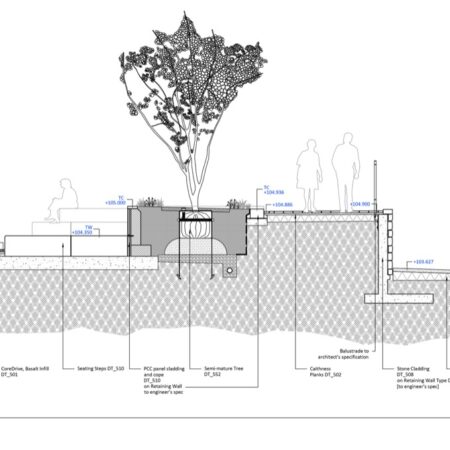 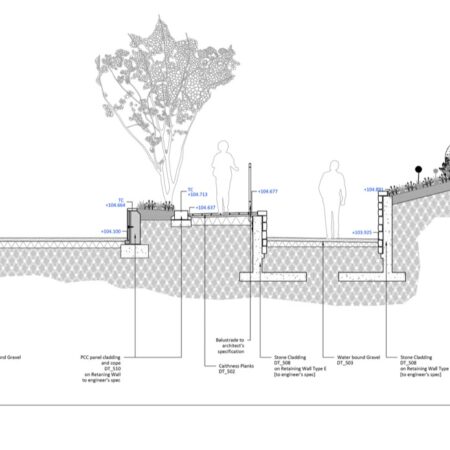 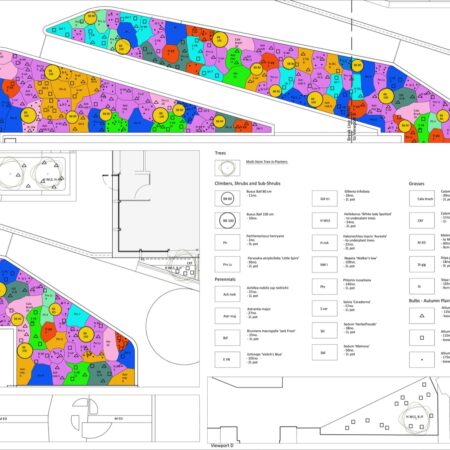 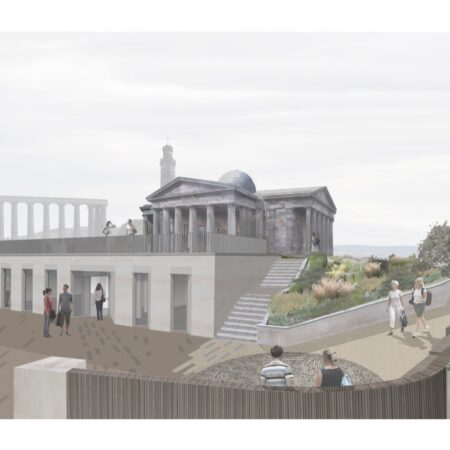 Stone terraces respond to the intensity of use, while the planting concepts respond to the hierarchy of the journey through the spaces, along a determined path. The planting palette, predominantly grasses and meadows, adds to the concepts of observation and illustrate the passing of the seasons. These species also change through the day as the sun and daylight play across the flower and seed heads. Chosen to provide maximum visual interest throughout the year, whilst also complimenting surrounding architecture and hardscape, is extremely low maintenance and has a high biodiversity value. A predominance of perennials and grasses, a proportion of which are native and that one might readily find on adjacent Arthur’s Seat or within a similar Scottish landscape. The strongly contrasting globular forms of clipped box balls, shaped trees, and multi-seasonal bulbs echo both the use of the site and the shape of the domes of the observatory itself.

Informal seating interventions were designated to create places to stop, pause and reflect. Artist in residence, Tessa Lynch proposed a series of physical elements that shaped a journey in the landscape, these are parts of film sets, diffracted camera lenses, with vantage points around the city.

It was imperative to recognise the life costing and maintenance burden imparted by the design, onto the operators, Collective Galleries. Reuse of site-won materials was an important consideration, to retain the exposed, excavated geology on the site was fulfilled by using the reclaimed basalt for paving aggregate, to echo the volcanic origins. This approach was not only to recreate what was there, interpreted in a contemporary way, but to have a resource-conscious and low carbon footprint associated with the reuse of site-won assets. In the case of harvesting the native topsoil, this is an ecologically and pedologically valuable resource, for the inherent seedbank of grasses held within it.

HarrisonStevens assisted both the project Architect and client in a comprehensive programme of engagement with stakeholders, city planners, council technical departments and utility and servicing providers.  The Collective Gallery had an active gallery space elsewhere in the City, this was used for pre-commencement engagement with gallery visitors.  Models were produced for the project and a project specific website was created to ensure full engagement, up to date and informative.  HarrisonStevens consulted with the City Landscape Teams to ensure that specifications were acceptable, and maintenance was approved.  Given the sites heritage status three key groups were consulted – Historic Scotland, world Heritage Edinburgh and the Cockburn Association.  HarrisonStevens played a significant role in these discussions highlighting how the landscape approach provided a sensitive response to the historic setting.  HarrisonStevens led the planning approval process for the landscape works and oversaw the implementation of the works with the landscape contractor.

There was a culture of collaboration within the team, an essential skill for this project where several buildings are involved, including a new café/restaurant and gallery spaces.  The landscape unified all these separate attractions.  The Architect, Engineer and Landscape Architect created a tight design team where decisions were made within workshop discussions and each discipline having their point of view listened to and debated.  The final spatial experience is testimony to this approach, the landscape levels, grades, drainage, routes and spaces tie the project together and provide a setting for the contemporary and historic buildings.

This site transcends the new and old; the near and far; the natural and the refined; in the context of union between the traditional and contemporary. 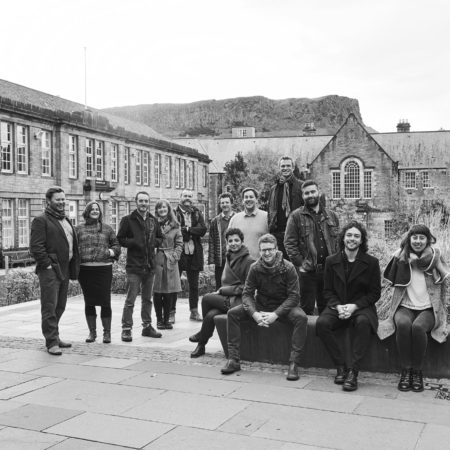