A few meters from the Place des Vosges, the city of Paris launched a project in 2016 to rehabilitate gendarmerie barracks as social housing and a space open to the public. The Paris based Office of Landscape Morphology and Rh+ architects won the competition and inaugurated the project in February 2020.

In order to reveal the different histories of the place while accommodating new uses, our project evokes the palimpsest of the Minimes islet in three ways. First, by opening it to the public to reveal the enclosed space. Then to register the heritage of the built surroundings while creating a garden. Thirdly, to reveal the square courtyard, while taking advantage of the “accidents” of the existing architecture. 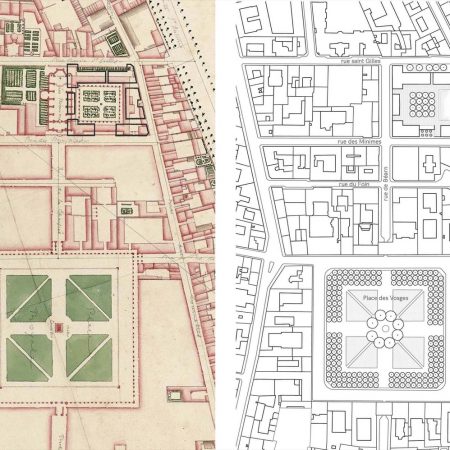 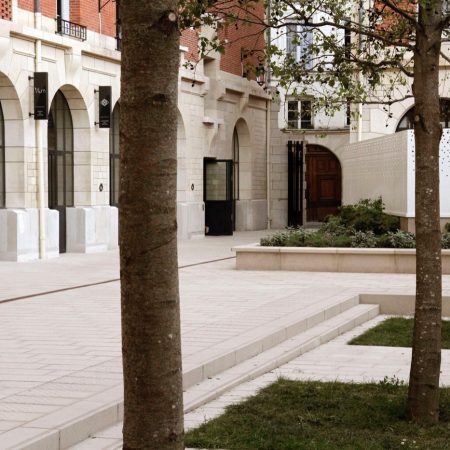 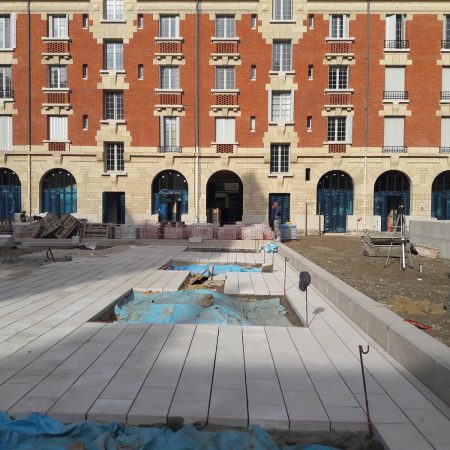 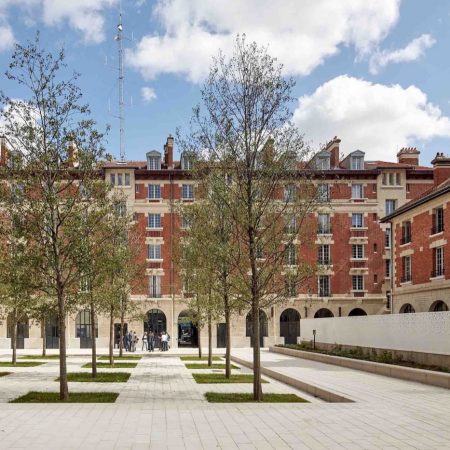 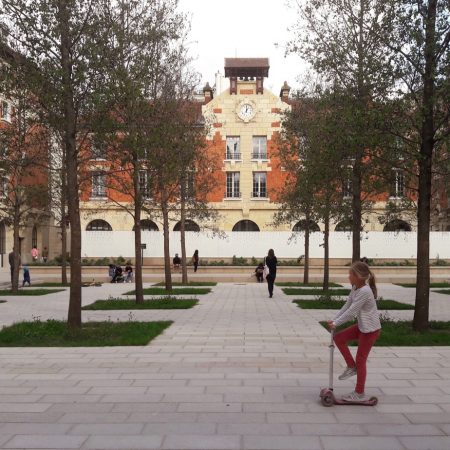 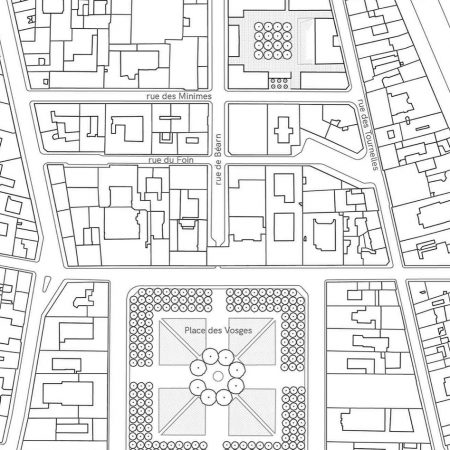 The porosity of the enclosed space

Our first step was to argue to the Parisian authorities for the opening of the courtyard to the public, because the layout of the five buildings created a strong feeling of an enclosed space, closed from external outlooks. In the narrow streets of the Marais district, each space counts, and we proposed that the Minimes should be an open island for the first time in its history.

To make this accessibility acceptable, it was agreed that the courtyard would be open to the public during the day and closed at night. Thus, we proposed two types of actions for the existing heritage. To remove the surrounding walls along rue St Gilles and rue des Minimes to create visual openings to the central area, and keep the four existing portals on the streets of Béarn and Tournelles, while completing this vocabulary of grids with two new entries on the streets of St Gilles and Les Minimes. Thus, while being accessible, the courtyard becomes a calm and privileged space, sheltered from the traffic on the streets of the Marais. For pedestrians, the courtyard becomes both a daily shortcut, and a privileged passageway, with its invitation to people to pause and take a break, between the “Chemin Vert” metro station and the bustle of Place des Vosges.

Between inhabited courtyard and square

The barracks are characterized by solid brick architecture on all the facades (except one) but which rest on a limestone pedestal contrasting with the buildings in wood and stone structure of the district. The layout of the buildings creates an atypical interior space, closer to the geometry of the majestic Place des Vosges than the vernacular courtyards of the district. And yet, the program and the historic enclosure call for an inhabited courtyard atmosphere.

We imagined creating a base that encompasses both the ground floor and the courtyard as a whole by continuity of material. Indeed, the new programming on the ground floors of the buildings (café terrace, crafts) invites users to spill over into the courtyard space. The choice of limestone for the flooring responds to the architecture of the building and contrasts with the public space of the neighboring streets. Indeed, the streets and courtyards of the Marais are predominantly gray, with natural stones in granite and sandstone. Here, the choice fell on a brighter stone, limestone from Comblanchien from the neighboring Burgundy.

This contrast of atmosphere, provided in large part by the warmth and the luminosity of this material, contributes to highlight the urban part of the barracks, and functions independently of the rest of the public space.

The heritage protection regulations of the Marais impose the preservation of the predominantly mineral court. However, the policy of the City of Paris, in this dense district and its lack of islands of freshness, calls for the creation of gardens and a vegetation which contributes shade in particular.

So we proposed two ways to revegetate this space, at the interface between courtyard and garden.  On the one hand, a majestic frame of 16 large alders trees planted in the heart of the courtyard, whose trunks are surrounded by grassed paving stones which allow a transition between the roots of the tree and the paving of the courtyard. The middle of the square has a slight slope, that invites people to sit on the steps, in the shade of the trees. As the central square is surrounded with channels of corten steel that harvest the rainwater, and is located halfway between buildings and courtyard, it draws attention to the entrances from the rue des Tournelles that can take visitors into the center.

On the other hand, the vegetation of the fringes and entrances around this central square by making plantations at the foot of the trees in rue St Gilles, plantations along the fence in rue des Minimes and the courtyard of the kindergarten. These edges are also places which local inhabitants can appropriate: the planters form benches that invite people to sit, the plantations are composed with edible plants, and certain places are left free to create small shared vegetable gardens.

Architecture offices involved in the design (if any): RH+ architectes