The design behind the Cayuga Grand Vista Trail creatively uses void spaces to tell a story. To view the Grand River from a place where typically only the eagles soar is a breathtaking experience. Found in Cayuga, Ontario, Canada, this 300m long bridge was to be repurposed for pedestrian use to engage the local citizens of Haldimand to live healthy lives. Standing on a piece of history, Canadian landscape architect Brad Smith created a seamless design to engage the public in empathizing with the ecological marvel below. The bridge is five metres wide and holds two larger platforms engineered where benches have been placed to view from a restful place. The platform’s edge is also the edge of the railing, which makes the 90-degree view down clear of obstruction. 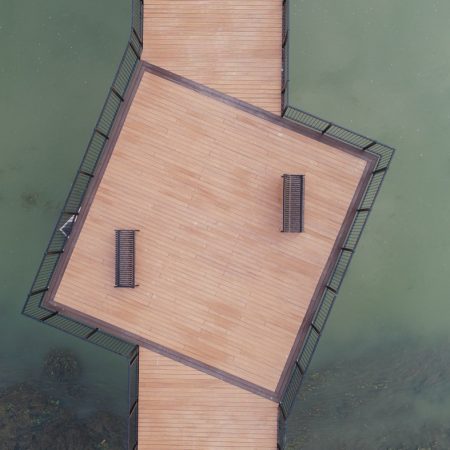 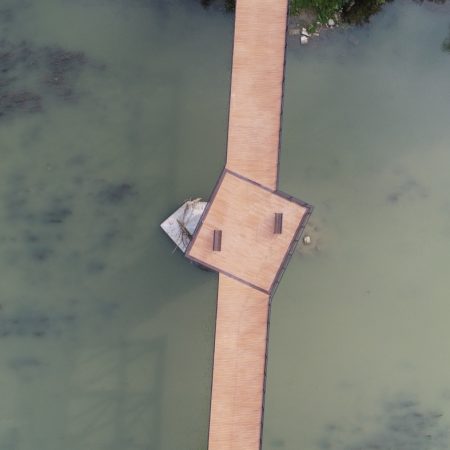 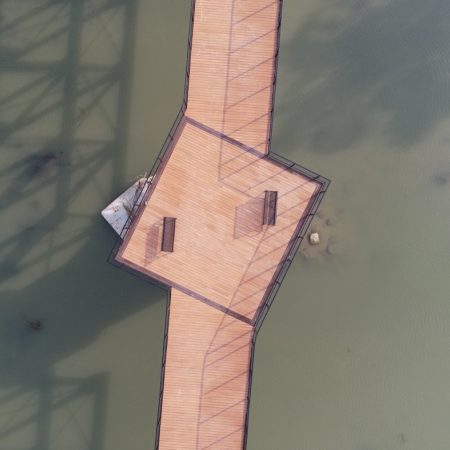 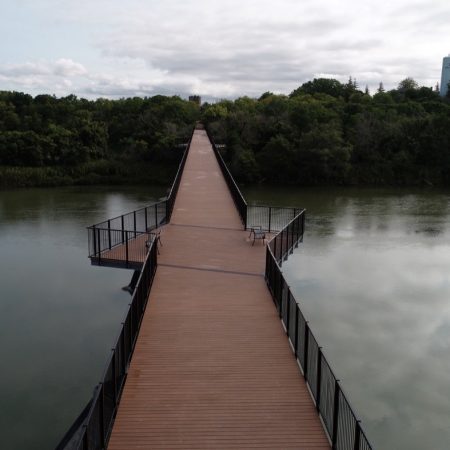 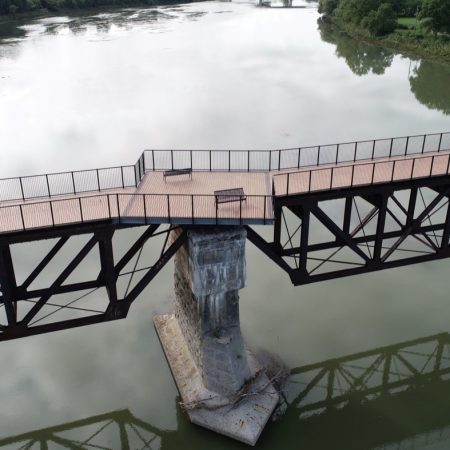 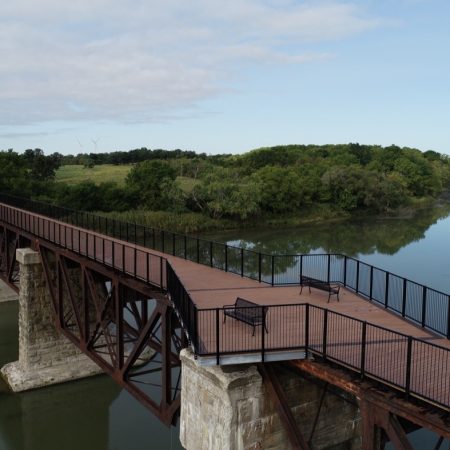 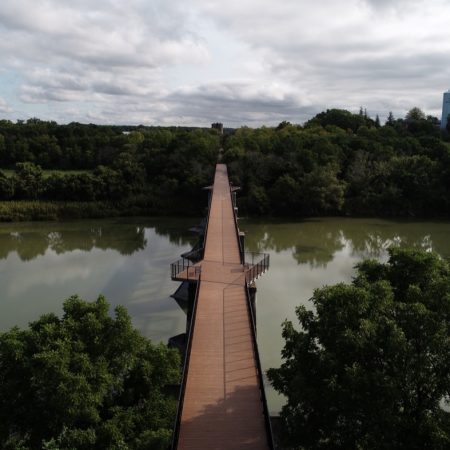 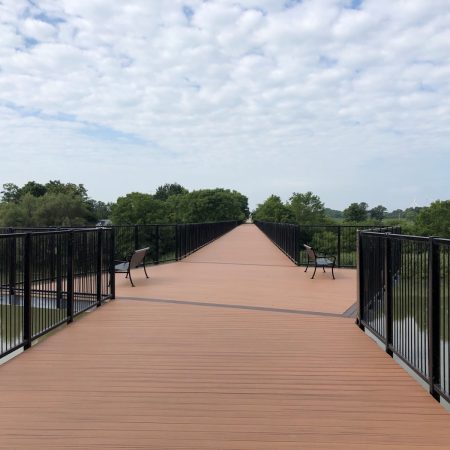 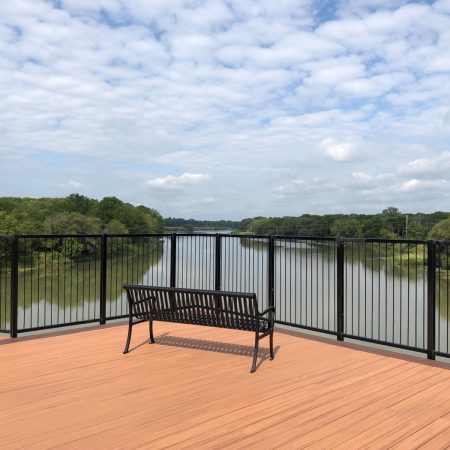 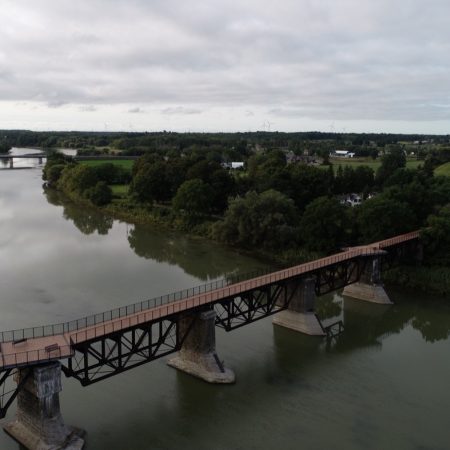 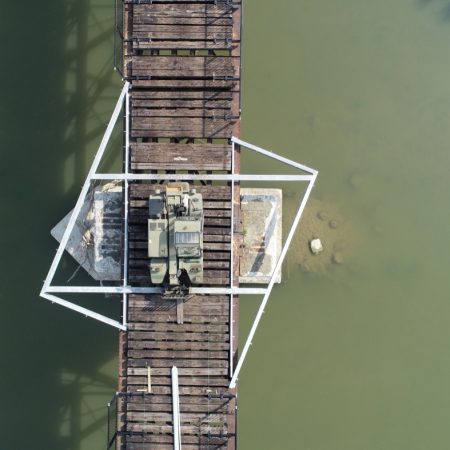 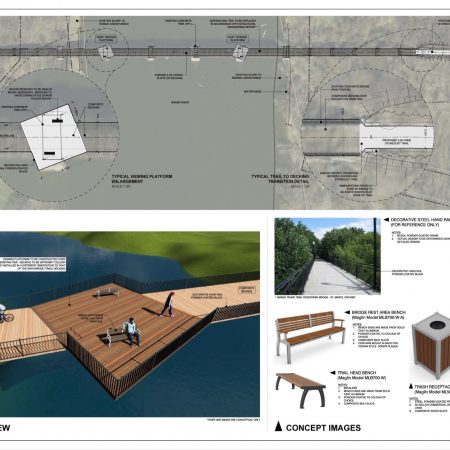 The Cayuga Railway bridge was abandoned in 1996 by the Canadian National Railway, but the leadership in Haldimand County felt the bridge should remain a function in the community. The Cayuga Grand Vista Trail project was repurposed to be a pedestrian corridor with a primary focus on connecting the Cayuga, Ontario, community from one side of the Grand River to the other. The five Pratt-style deck spans that appear to be upside down are situated on four stone piers and were considered critical and suitable in the early stages of the concept. Although unintended for pedestrian use when initially constructed, this historic bridge style, with its infrastructure hidden below, suddenly provided the Seferian design team with the opportunity to maximize the space given for walking and cycling while also adding social space.

The Cayuga Grand Vista Trail bridge meets the Canadian Highway Bridge Design Code and is fully accessible. Brad Smith, the primary landscape architect on this project, decided to challenge the margins of design by having the decking extend to the outer reaches of the bridge and include two custom-built 8.5m by 8.5m social platforms situated over two of the four stone pillars. The tension and extension of decking would allow for the best use of the bridge and would fulfill and exceed the requirements given by town leadership.

The existing path marked out at either entrance to the bridge is covered in native natural growth, providing screening and giving the pedestrian the feeling of being in a tunnel. The grade at both entries to the bridge is level, so when approaching the bridge, there is no indicator that you will soon find yourself exposed and elevated over a large body of water. The approach, the walk, and the space to build relationships while being promoted over a flowing body of water is an enchanting experience for local community members.

The human health benefits along this architectural corridor are boundless. The bridge invites and enables residents to meet the outdoor environment, and because of its 5m width, it permits all residents to do this at a reassuring and comfortable pace. And with the opportunity to move physically, Brad Smith and his team also designed special space to allow time to pause and associate with fellow visitors. There is ample research on the benefits of walking, cycling, spending time with members of your local community, spending time outdoors, and spending time alone. There are also benefits to seeing and hearing moving water, engaging with history, and participating in activities on a natural human scale. Due to the creative approach Brad Smith and the Seferian design team took on this challenge, there are now ample opportunities for post-occupancy research analysis, specifically human health and wellness.

For example, mental health is of primary concern in Canadian society today, so designing and constructing a square social space on an old railway bridge is brilliant. Each social square has two benches, one on either side of the path, facing the river near the edge of the bridge. While there are certainly benefits to human health by engaging in physical activity, there are also known benefits to rest and reflect on the life around you. Arriving at one of these two spaces, you will suddenly find yourself at that moment to stop, turn, and take in a portrait of life rather than actively tracking the next goal in life.

The Cayuga Grand Vista Trail Bridge is a unique place on earth. The bridge is more than a crossing; it’s also a platform. Walking, cycling, standing, or sitting on the bridge will allow you to take in the history of a time past by looking upriver from whence it came or downstream to a future day. Either way, the perspective you have is clear, which gives that moment in time on this Seferian designed bridge a special place in your life. 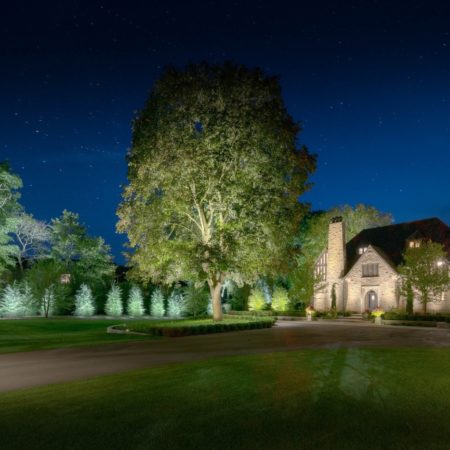 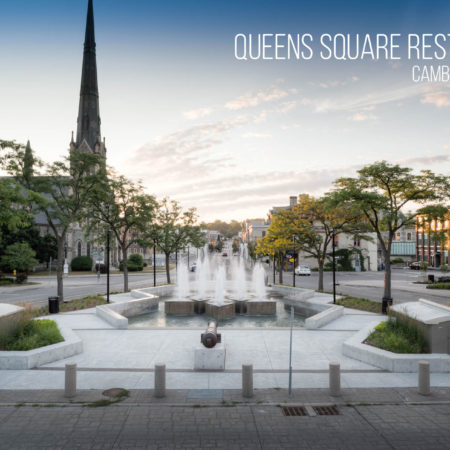 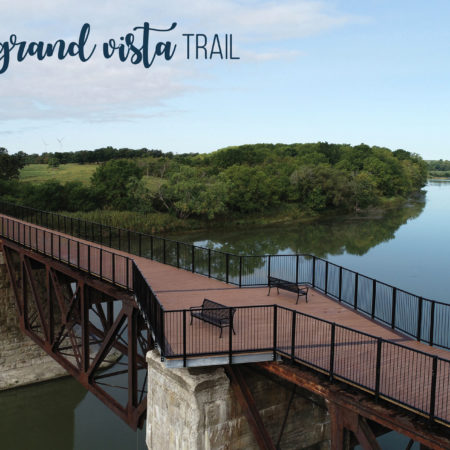