For its 100th anniversary, Thailand’s very first university Chulalongkorn University wanted to offering the property extending from its core campus for a new public park under a design competition in 2012. And for the first time in 30 years of rapid urban development, an invaluable property at the heart of the city -an 11-acres of land with a 1.3-kilometer stretch of road worth an estimated US$700 million- wasn’t turned into another block for commercial use, but, a public park for people.

Opened in 2017, Chulalongkorn Centenary Park is the first critical piece of green infrastructure in Bangkok to mitigate detrimental ecological issues and disaster risk reduction. Unlike other public parks around the city, this one is the first in Thailand to demonstrate how a park can help reduce urban flood risks and help city confronts climate change, all while offering city dwellers a place to reconnect with nature. Designed with various ecological design components, the park reminds the city of ways to live with water, rather than fear it. 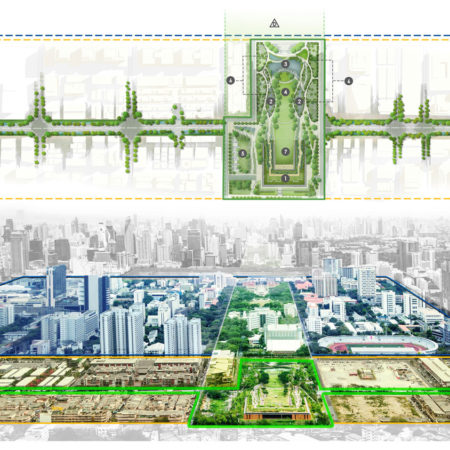 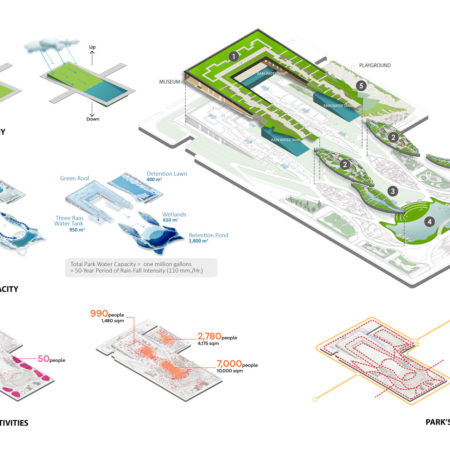 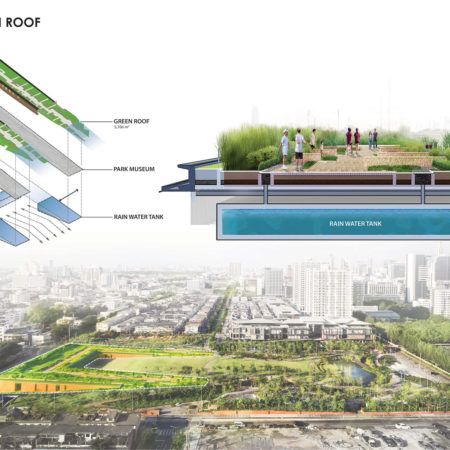 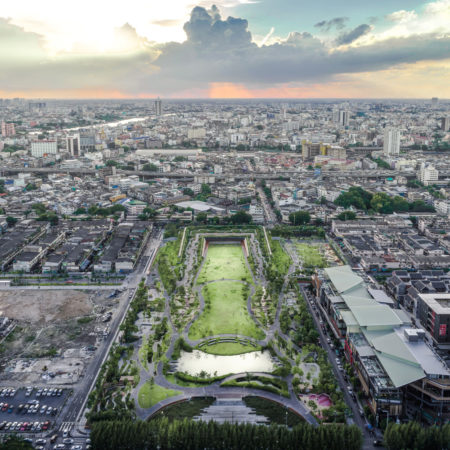 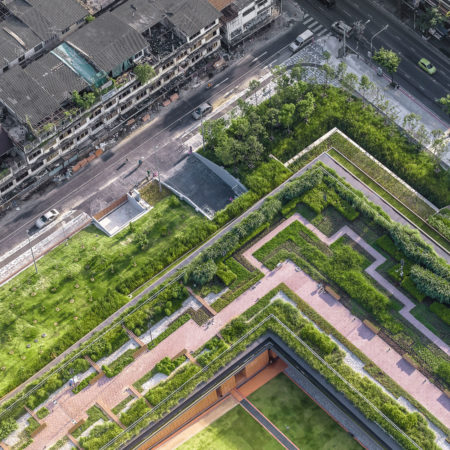 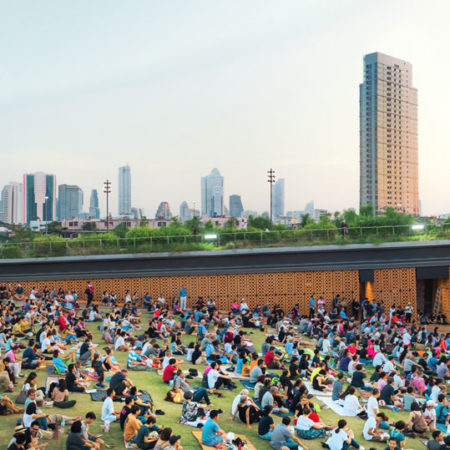 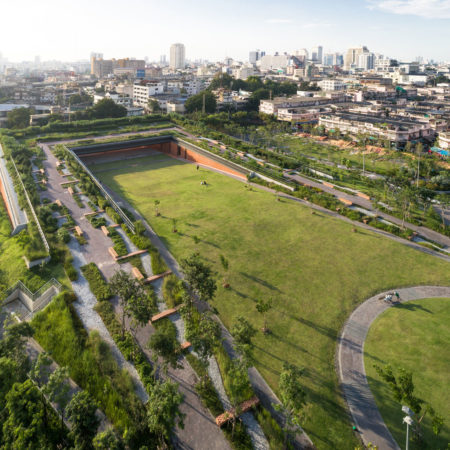 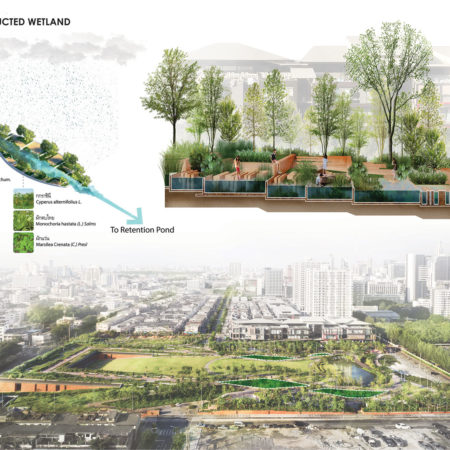 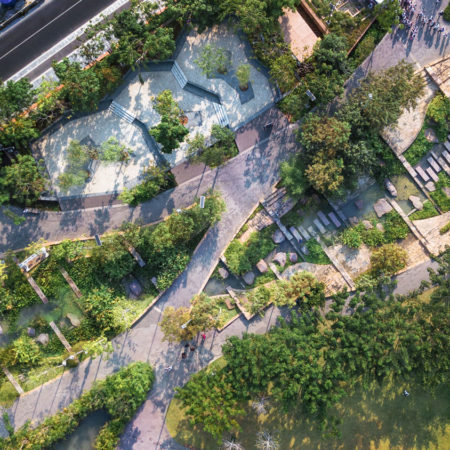 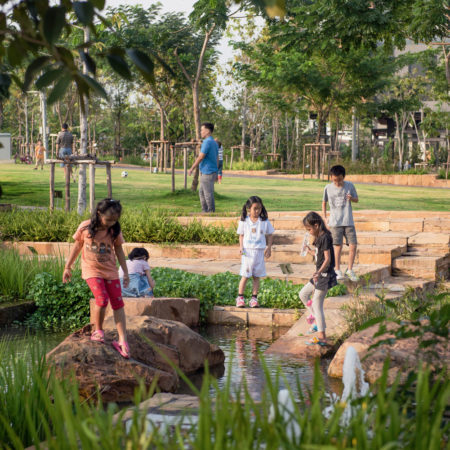 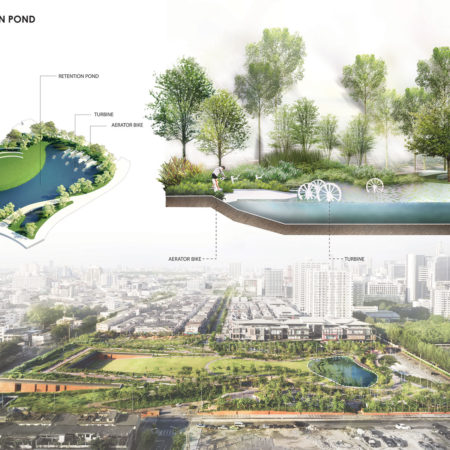 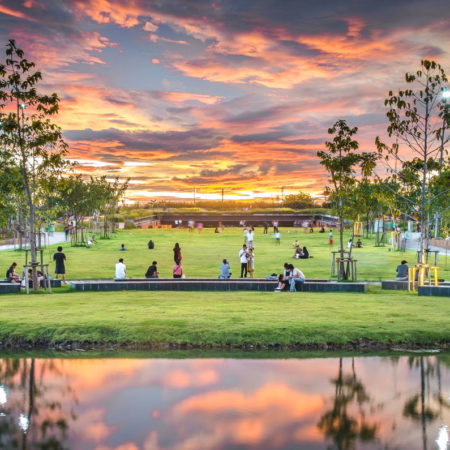 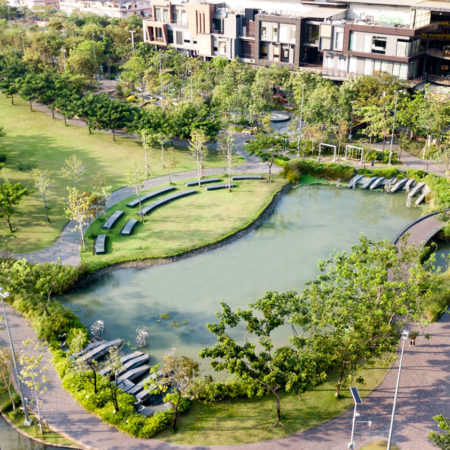 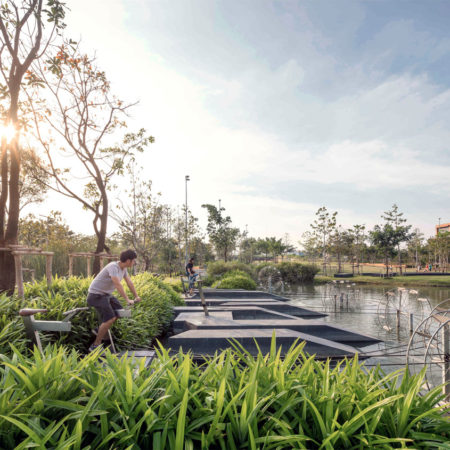 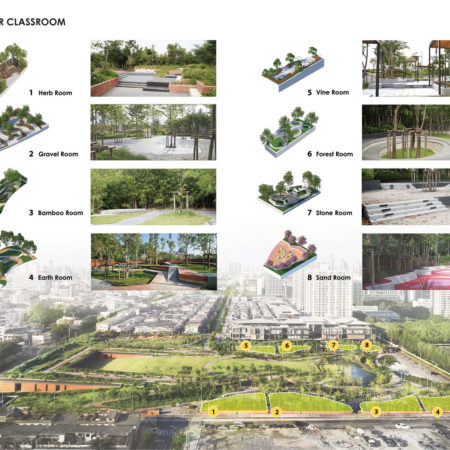 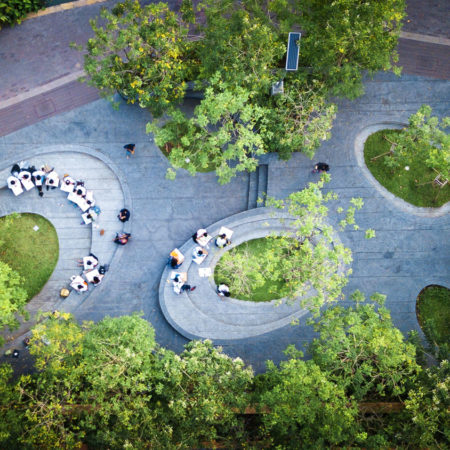 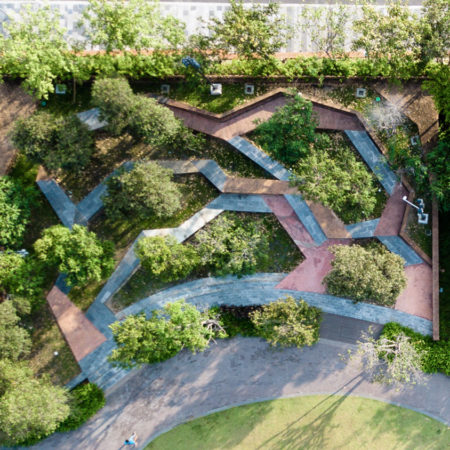 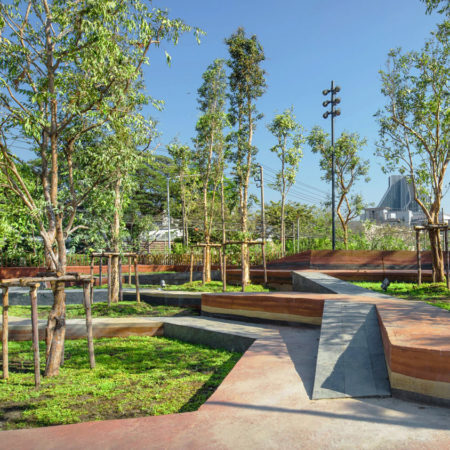 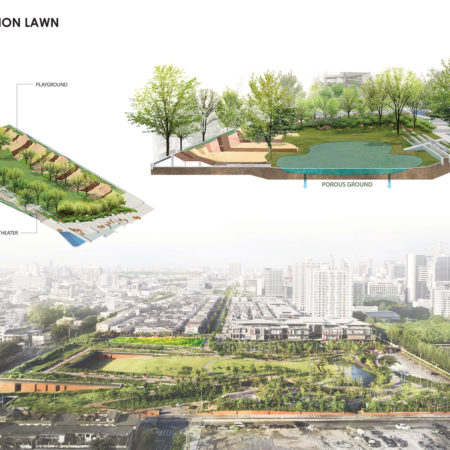 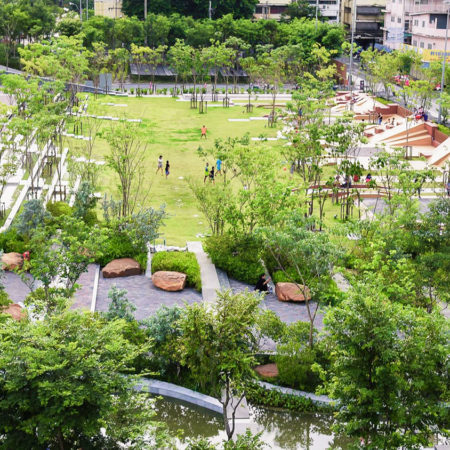 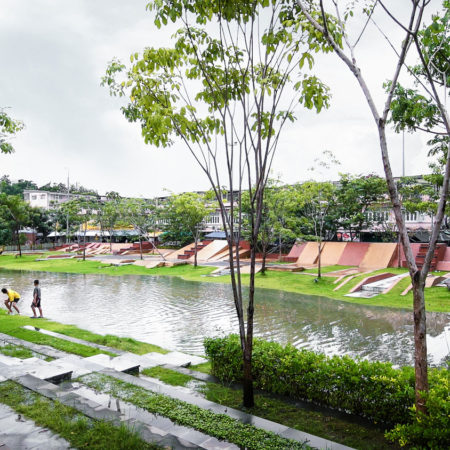 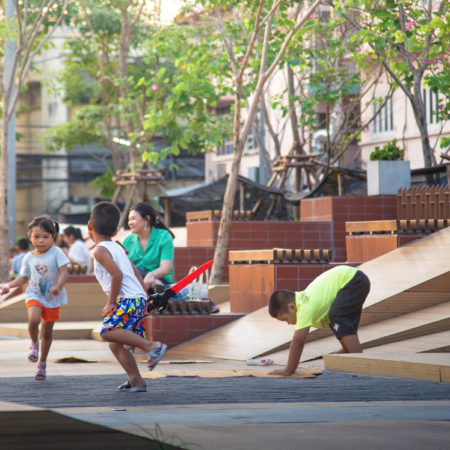 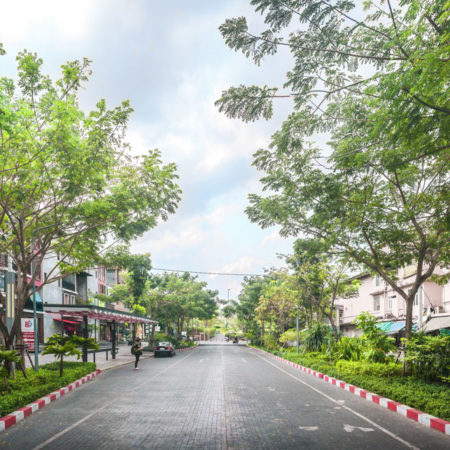 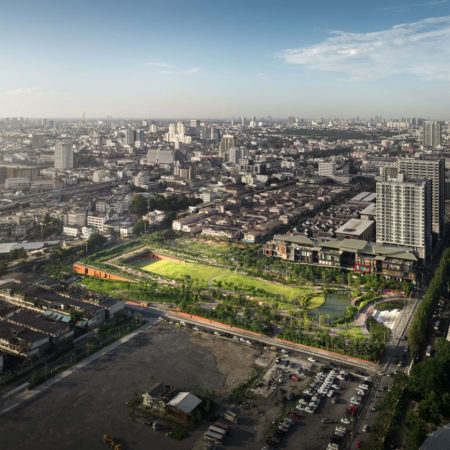 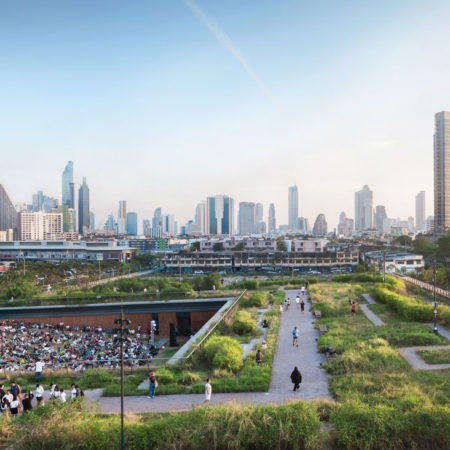 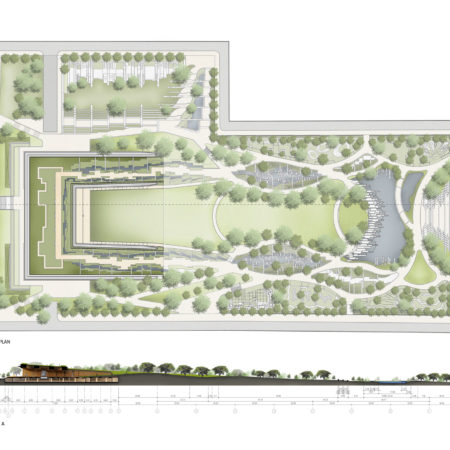 A flood-proof park for a flood-prone city

Bangkok is a flat city. By harnessing the power of gravity, the park is able to sustainably collect, treat and hold water to reduce urban flood risks in its surrounding areas. Sitting on a 3-degree gradual incline, the park equipped with several ecological components–consisting of the green roof, wetlands, detention lawns, and retention pond–leaving not a single drop of rain wasted. The rain and runoff are pulled down through the park‘s topography to generate a complete water circulation system. Taking into account a 50-year return period precipitation intensity, during heavy rainfall–oftentimes when the public sewage system is overwhelmed–the park is able to hold up to a million gallons of water.

On the park’s highest point, anyone can see Bangkok’s skyline, atop the biggest green roof in Thailand covering 5,200 sq.m., where a rare sight open skies and green grass is free to all. Laid with low-maintenance native grass and weeds which attract local birds and insects.

Underneath the green roof lies a museum and parking space. Additionally, three underground tanks store rainwater absorbed from the green roof. The amount of water it holds can irrigate the park for up to a month.

Excessive runoff from the green roof then flows through to four constructed wetlands, two on each side of the park. A series of cascading weirs and ponds slow down the runoff and increase water aeration, aided by native water plants which help filter and clean the water.

At lowest point, the retention pond, during severe flooding, can store excessive water and double in size by expanding into the park’s main lawn. Visitors, too, can become an active part of the park’s water treatment system by hopping onto any stationary water bikes along the pond, using their exercise to keep water aerated.

Adjacent to the main lawn is eight “landscape outdoor classrooms”, each with different biomes and layouts, lining both sides of the park to serve as diverse multi-purpose areas, including an herb garden, meditation area, reading room, bamboo garden, playgrounds, and earth amphitheater. Whether in the choice of porous components or locally-sourced materials, these outdoor classrooms pay great attention to detail to best complement the park’s main ecological features.

Following the planting concept of growing urban forests, 300 varieties of plants and trees have been grown either from seed or as young seedlings which easily adapt to the climate changes and recreate a healthy ecosystem.

The first green avenue made for the people

The first of its kind in Bangkok, the 1.3-kilometer road running perpendicular to the park was revamped to shift priority from cars over to foot and bicycles. By reducing four vehicle lanes into two and enlarging them each from 12 to 30 meters, the once heavily-congested street now seamlessly connects pedestrians and cyclists directly to surrounding neighborhoods. Also lined with corridors of rain gardens on both side to provide shade and reduce runoff from the road surface, the park shows Bangkok the possibility of a pedestrian-friendly, yet commercially-developed area.

While climate change has been a prominent issue for decades, a single park can’t control flooding across an entire city, but this park is the first step, and a big, bold one. As landscape architects, it is our obligation to consider every possible solution and sign of hope for our future. The Chulalongkorn Centenary Park gives us a spark of aspiration. As new challenges present itself, we can only see new opportunities sprung up for us to make a difference and save our sinking home.