The Coastal Modern Residence evolved from a desire for a densely planted retreat as a counterpoint to the homeowners’ northern urban residence. The drive to the site is through the busy streets of one of Florida’s small barrier islands, down a narrow private road, and into an open court enveloped in landscape. Collaborating with the Architect, DWY developed a landscape that balances lush sub-tropical plantings with openly defined spaces and creates a palpable sense of place.

The landscape of this modern beach house reflects the language of the architecture as much as the qualities of its natural context and regional setting. An oasis within a suburban neighborhood, the elevated pool and spa, pergola, site walls, and large-scale plantings connect a series of exterior spaces to the interior, and the architecture and landscape are experienced as a harmonious setting. DWY worked with the architect to study how the idea of a retreat could take shape in this site. On a sensitive coastal site with strict regulations setting the finished floor elevations of habitable spaces, and elevated living space was a given. With this as a starting point, DWY designed the pool deck and outdoor living spaces as the bridge between two elevated pavilions, grounded by a tropical landscape.

DWY shaped the motor-court as a reflection of the front façade of the house. The linear callida limestone paving set in a zoysia field reads less like a driveway, and more like a courtyard garden. This cadence carries up the front screen walls of the house where the first hint of the elevated deck can be seen in the linear railings. Initially a large invasive ficus benjamina occupied the south-eastern corner of the site. While its value for shade and protection from wind was evaluated, it encroached on the limited buildable area of the site and crowded the architecture. The tree was removed and the plant palette of the front was reconceived with respect to the owner’s vision and the regional microclimate. The tight side property lines are layered with salt- and wind-tolerant species, densely planted to screen out the too-close neighbors. Rather than relegating the space below the house to parking and storage (for which it also serves), the light of the open sky is drawn down into the open-air foyer through a glass-bottomed pool. Shade loving vessel plantings and epiphytes attached to the delicate screen walls erase the boundaries between architecture and landscape. The boardwalk – illuminated through the pool above – connects the Gulf of Mexico and the dune landscape (the “backyard”) to the front entry and motor court. The light-filled space provides the needed storage for the homeowners’ rowing sculls and other recreational equipment and at the same time provides shaded outdoor living and work space. At the upper level, the materiality of the planters, pergolas, and other landscape elements was a part of not only the landscape architect’s palette, but also the interior designer’s. The formal, as well as the material, connectivity between inside and out, public and private, enhances the perception that this relatively compact site is an expansive and isolated retreat. Interior and exterior spaces are equally suited for cooking and dining, socializing, and even bathing and slumber, with a sleeping porch connected to the southwest master-suite.

While the program and desired experience of this singular coastal site resulted in the most tactile aspects of the design, the ecological impact of developing the parcel was equally important to the design team and the owners. With the main structure inherently elevated, the solid footprint on the ground was already minimized. A majority of the site remained either untouched, as with the native dune species at the west end, or permeable, as seen in the gravel under the house, and most prominently in the motor court. Here, a dense callida limestone, quarried from the center of the state, was set in a linear pattern to mimic the scale and language of the house. Between the stone, zoysia grass – a salt tolerant and fast-recovering species – was planted. This permeable alternate to a traditional driveway minimizes stormwater runoff and off-site impacts from development.

Below this unique ground plane is a 6,000 gallon cistern that collects rainwater from the gutters and recirculates it to irrigate the planted areas. Without real estate for an above-ground storage tank, the most effective location for the water storage was several feet below the limestone-paved motor court, but above the naturally high water table. Along with more common sustainable practices – the removal of all invasive plant species, the re-nourishment of the existing dune, and plant selection with respect to the harsh microclimate and future growth – the onsite water management strategies, though not visible to the eye, are key to the durability and preservation of this place for the next generations. 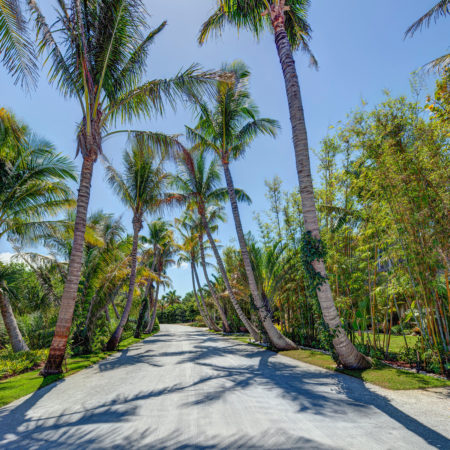 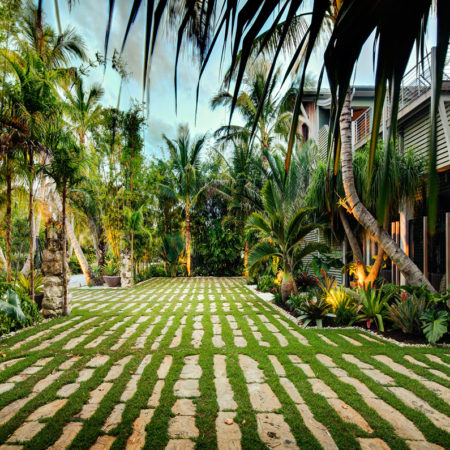 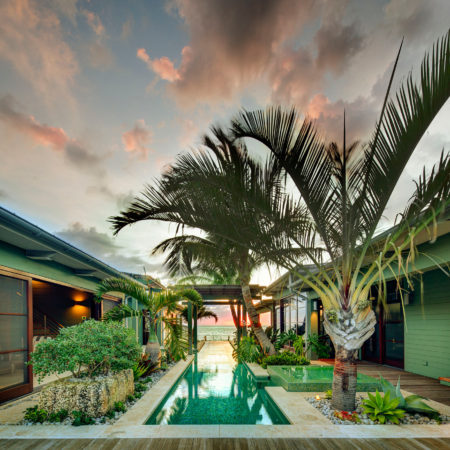 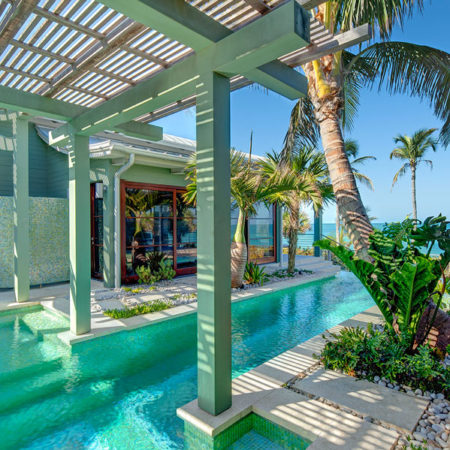 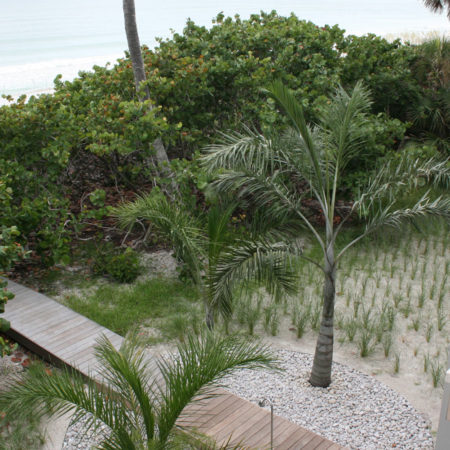 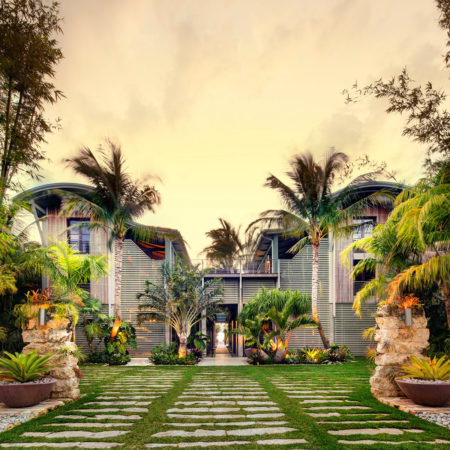 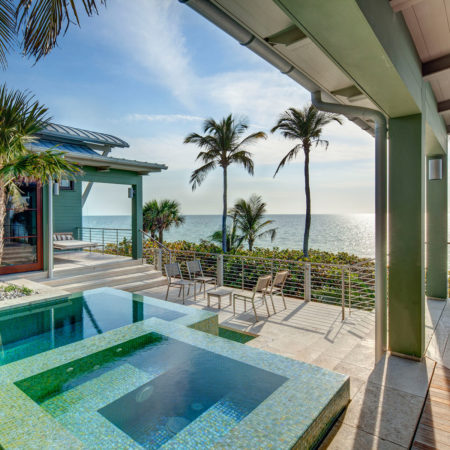 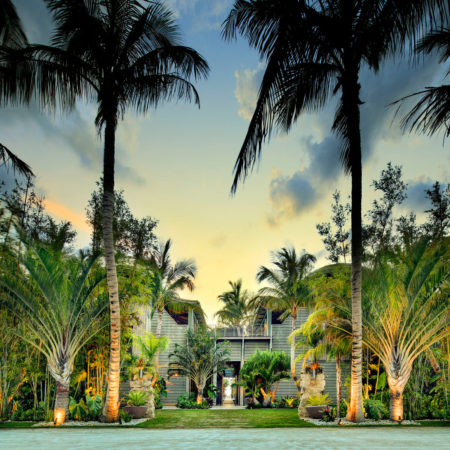 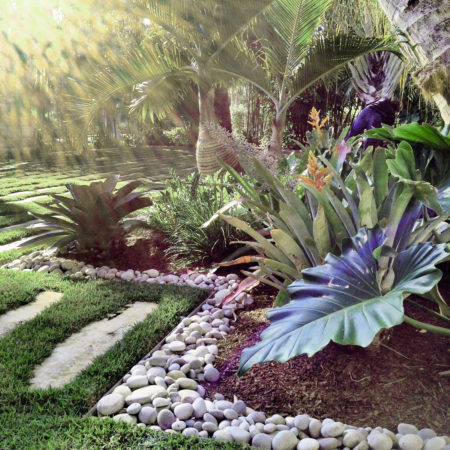 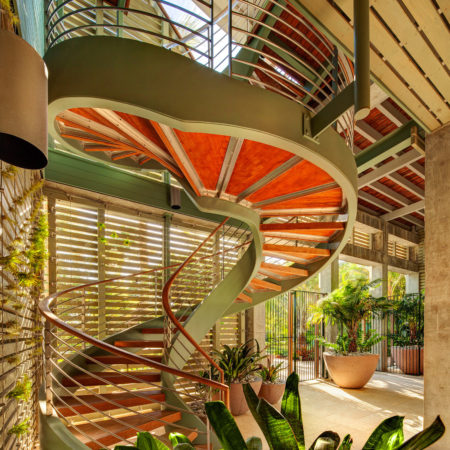 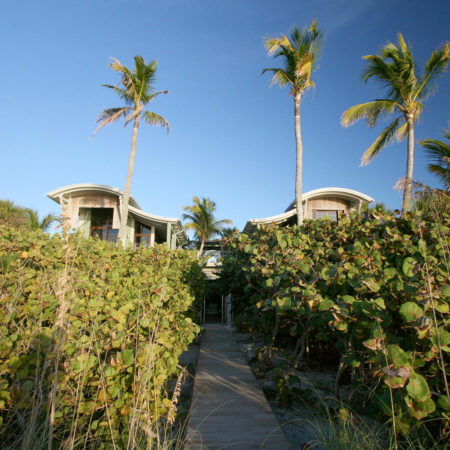 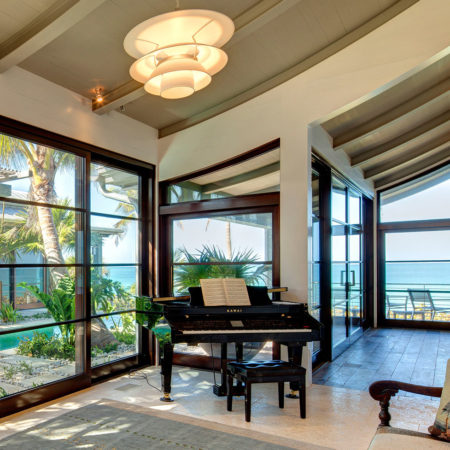 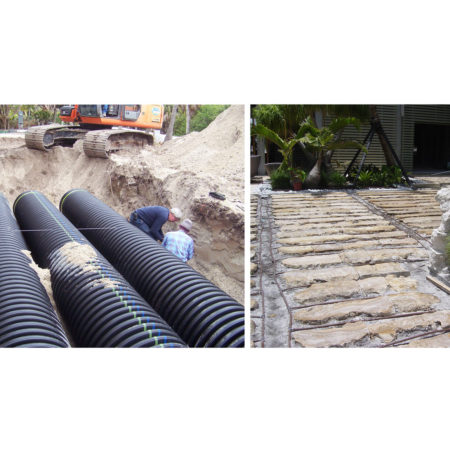 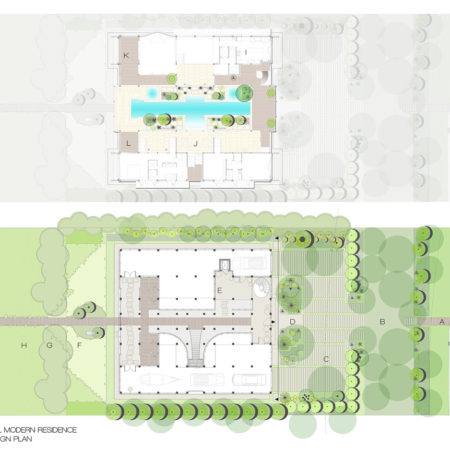 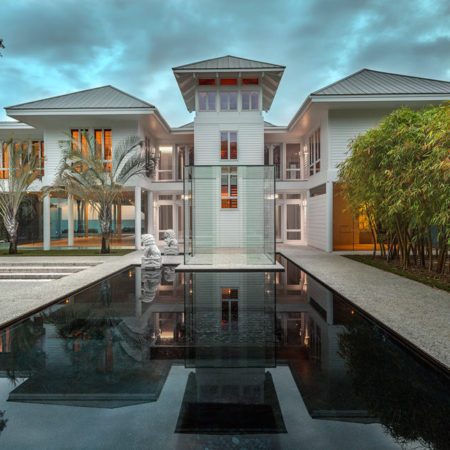 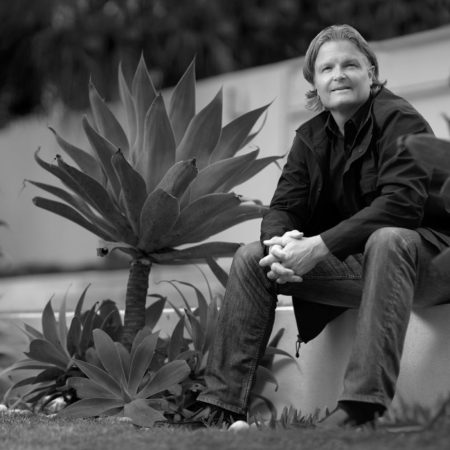