1. Previous state
Limburg is the cycling paradise of Flanders, Belgium and even the Euregion. Twenty years ago, Limburg invented a network of cycling junctions. This is a network of different cycling routes that are connected to each other via junctions (usually crossroads of bicycle trails). Limburg has developed 2.000 km of cycling trails. Every year Limburg receives an average of two million cyclists. The Limburg bicycle route network is one of the main reasons for visiting Limburg.
De Wijers is a unique nature reserve which contains about 700 hectare of ponds and culture-historical domains. It is situated in central Limburg. Until recently, this domain could not be entirely explored by bike. Bokrijk is one of the hot spots in this area. The domain of Bokrijk includes a 19th-century castle with its own park, an open-air museum, an arboretum, a nature reserve and a pond complex.

2. Aim of the intervention
The aim of Limburg is to strengthen its position as a market leader in bicycle tourism through new impulses. By adding an extra layer to the Limburg bicycle route network through innovative projects, Toerisme Limburg wants to put a spotlight on Limburg as a cycling paradise. To ensure tourists can explore the domain of the Wijers to the fullest, a new landmark was created: ‘Cycling through Water’, a bicycle trail straight through a pond.

3. Description
In 2014 the search for the best location to develop ‘Cycling through Water’ pointed out Bokrijk. Here a bicycle path between two ponds already existed, which limited the ecological impact. In April 2016 ‘Cycling through Water’ opened, an experience bike trail through a pond of the De Wijers nature reserve in Bokrijk-Genk. Since its opening, more than 300.000 cyclists have visited the cycling path. And the numerous walkers are even not included in that number. ‘Cycling through Water’ in figures:
– Concrete cycling path;
– Between junctions 91 and 98 of the bicycle route network;
– 212 meters long, 3 meters wide and 1.60 meters deep.

The project was completed in a very short time thanks to the positive cooperation between the project partners. The construction of the bike trail was combined with nature conservation projects in the surrounding ponds. This resulted in improvement of the water quality and a significant increase in the habitat of amphibians.
– The dikes have been remodeled which has resulted in purer water in the ponds over a longer period. This is a good thing for the amphibians.
– Under the bike trail an underground crossing is provided. Amphibians have the ability to move uninterrupted between the two ponds.
– The Bokrijk open-air museum is also visually ‘closer’ to the bicycle route network and has an increased amount of visitors.
– Assisted by the heritage department of the Flemish government the heritage of the De Wijers received an upgrade. The ‘monks’ who traditionally regulate the water management of the ponds were replaced by replicas. The old remnants of the ‘monks’ were preserved.

Other features:
– Unique: this is not only unique for Limburg, but even a first for Belgium and Europe. You can have this unique cycling and water experience nowhere else!
– Car-free: of course this is a car-free route. The safety of the cyclists is essential.
– Comfortable and safe: the design explicitly took into account the safety and comfort of the cyclists. For example, the floor of the cycling path is constructed with special slip-resistant tiles, even in frost.

Beside the nature conservation projects the interaction between the ponds and the open-air museum will be increased by including the historically valuable Pigeon Tower and the old farm called Hoeve Ceulemans. Transforming them into viewpoints will reward the visitor with a beautiful view of the ponds and the cycling tourists moving in between them.

4. Assessment
Since its opening, the interest in this special bike trail is huge. An average of 800 visitors per day explore this part of the Limburg cycling junction network. With highs on Saturday and Sunday and no less than 5.000 cyclists on top days. That also explains the hype on social media. A lot of visitors post photos and selfies online. Even blogs talk about the extraordinary experience.
‘Cycling through Water’ has provided qualitative improvements to the larger environment. The project is not only an impulse for Bokrijk, but also for the future tourist development of the De Wijers site. This bicycle attraction is a clear reason for tourists to come and share.

The success of ‘Cycling through Water’ makes it clear that the bicycle route network in Limburg offers a very strong grid for incorporating innovative tourism projects. Through this and similar cycling experiences, Limburg will take its place on the international map as a cycling region, where beautiful landscapes and unique heritage are strung together. In addition these projects can be a stimulant for future
developments on and next to the bicycle route network. 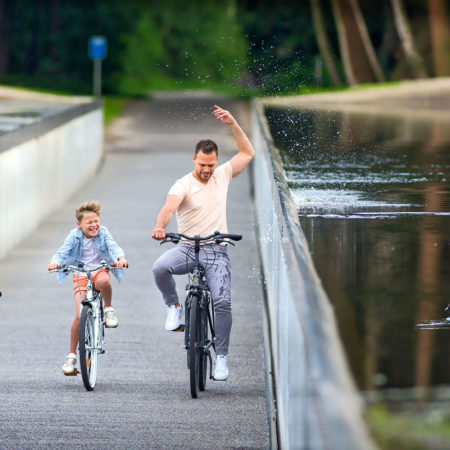 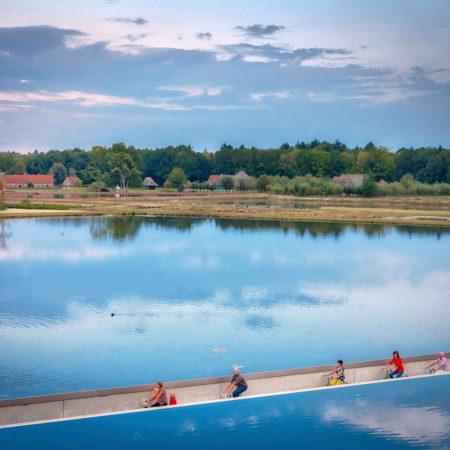 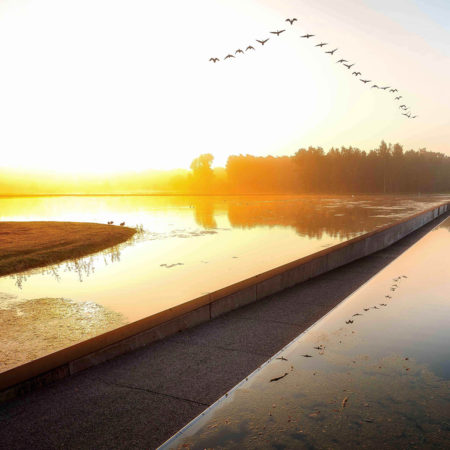 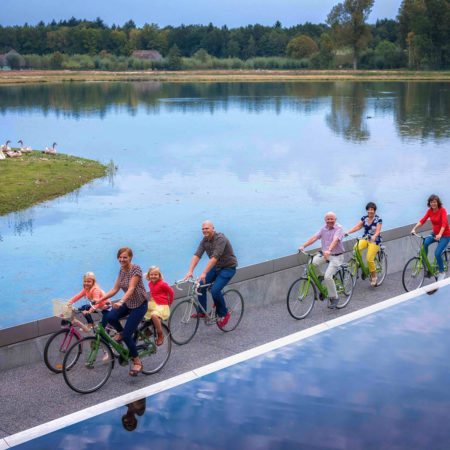 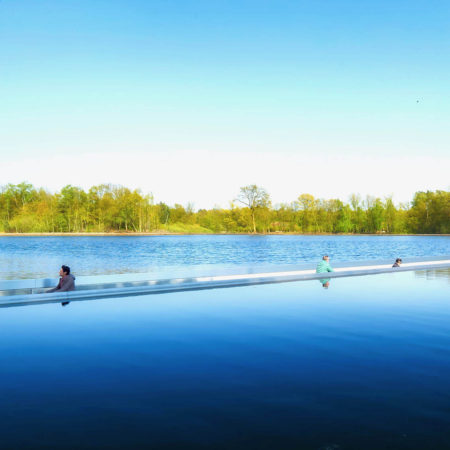 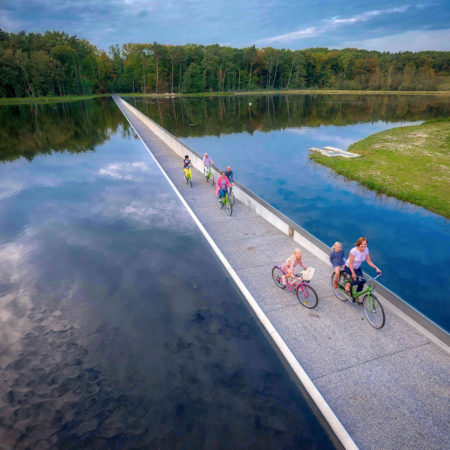 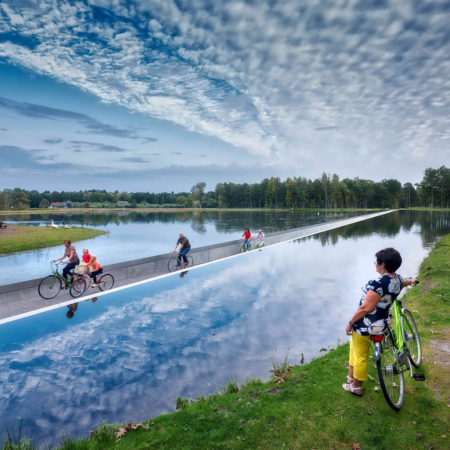 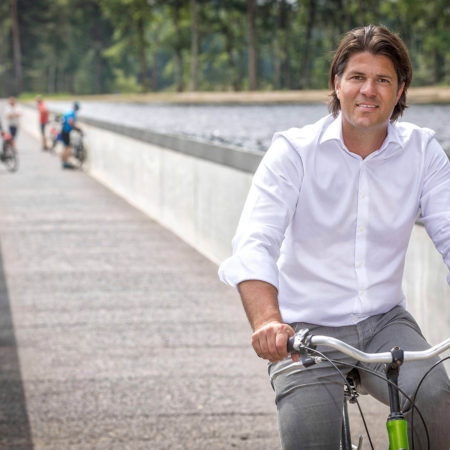 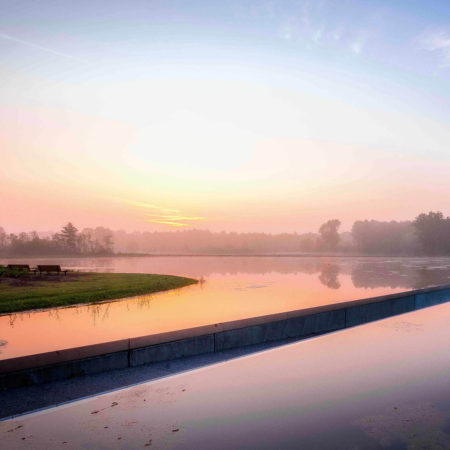