‘Doubleground’ is the 2018 NGV Architecture Commission located in the sculpture garden of Roy Grounds’ National Gallery of Victoria. As an intervention, the project specifically seeks to challenge the role of the garden. Rather than an object in the garden, it is the landscape that generates interiors and rooms and, by burying the original, reveals a new kind of civic space. Collage is used as a tool for stitching together a formal memory of the pre-Mario Bellini amended NGV building – a memory blurred by time. Lines in the collage become walls and the walls occasion tectonic folds in the turf plane of the garden, re-formalizing an architectural memory from what was. The project is not about making spaces that are performative but rather spaces that offer invitation, are explored and passed through-spaces for the body: a room, a corridor and a field.

‘Doubleground’ provides am ephemeral intervention that challenges and celebrates the role of the garden by echoing the formal architecture of Roy Grounds through a sympathetic new language. The intervention is defined by an equal and embedded collaboration between the disciplines of landscape and architecture. Landscape, structural requirements, and interior spaces deliver a new embedded project within the Grollo Equiset Garden where it is impossible to separate landscape from architecture and vice versa. 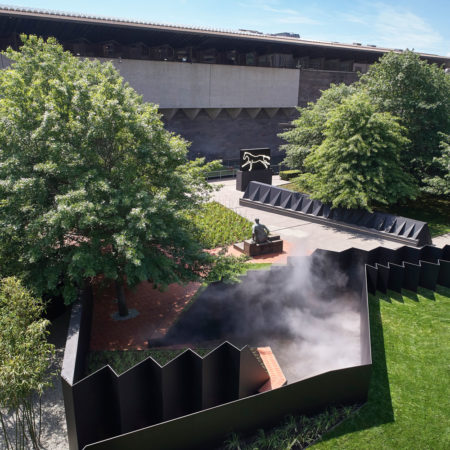 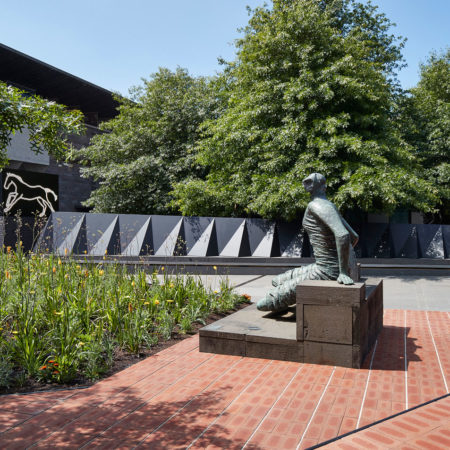 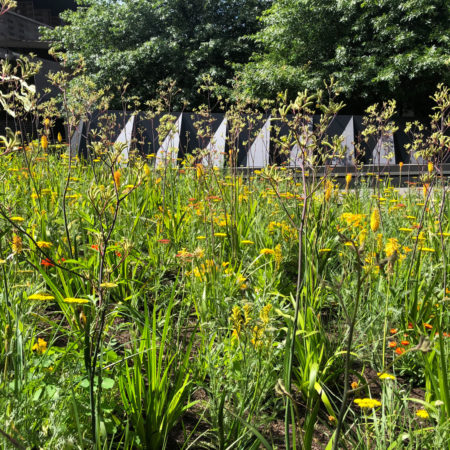 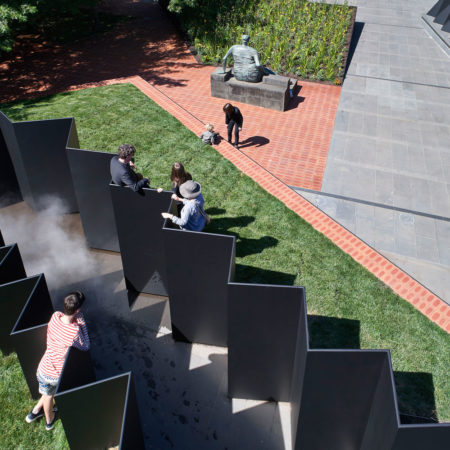 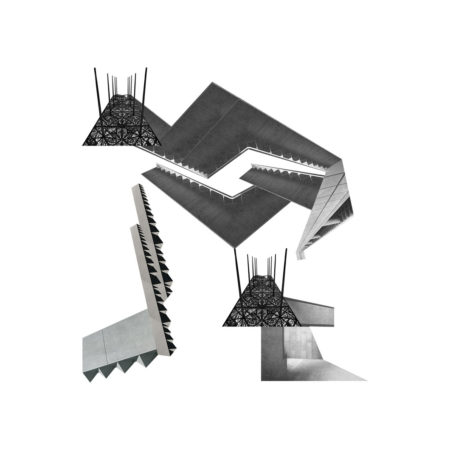 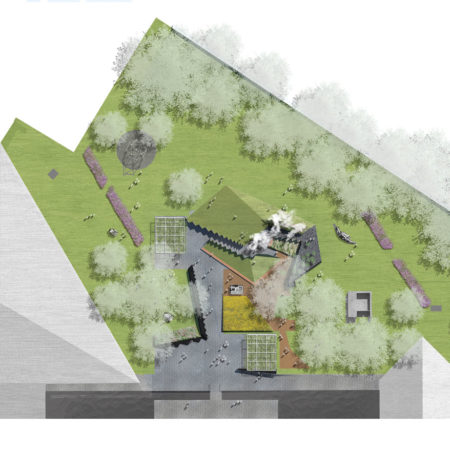 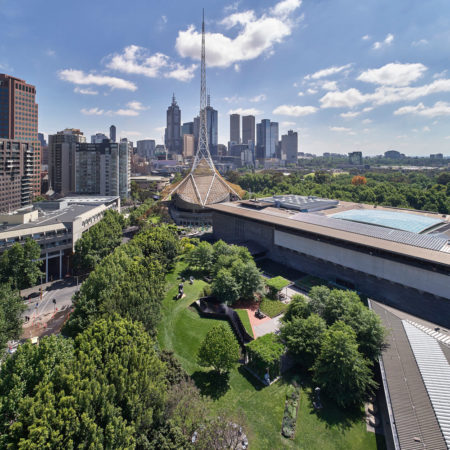 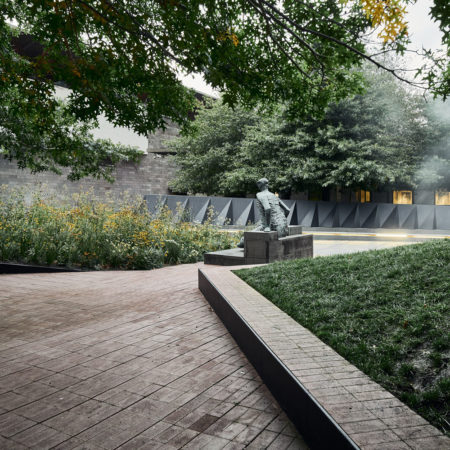 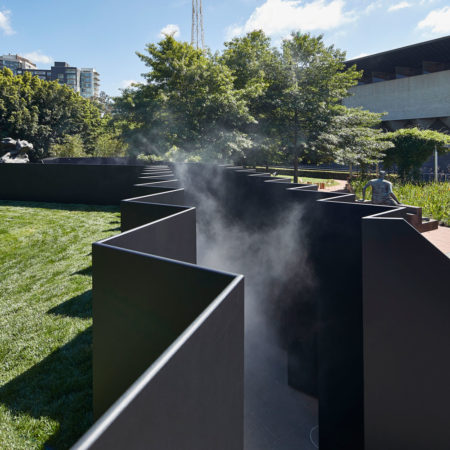 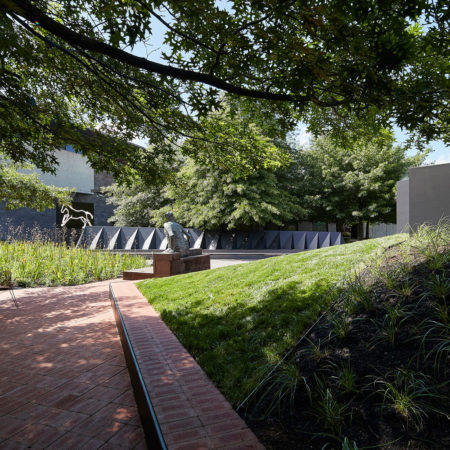 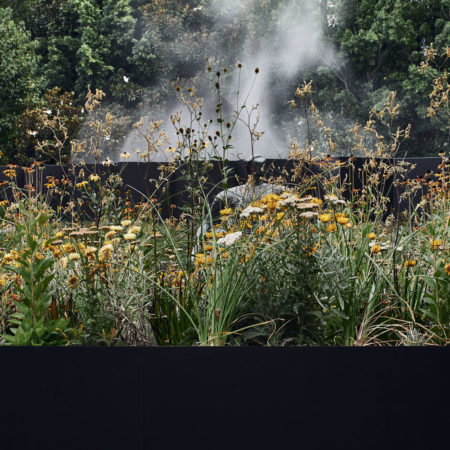 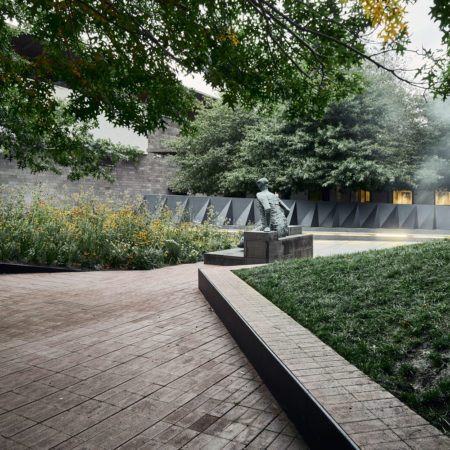 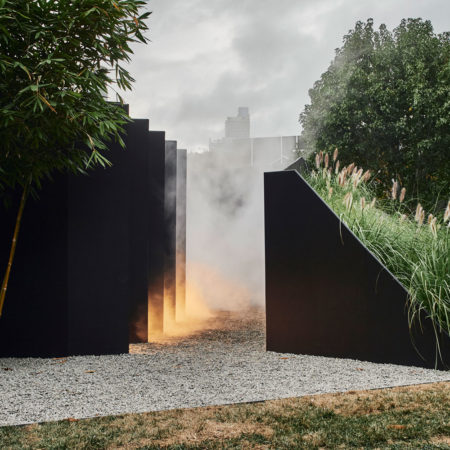 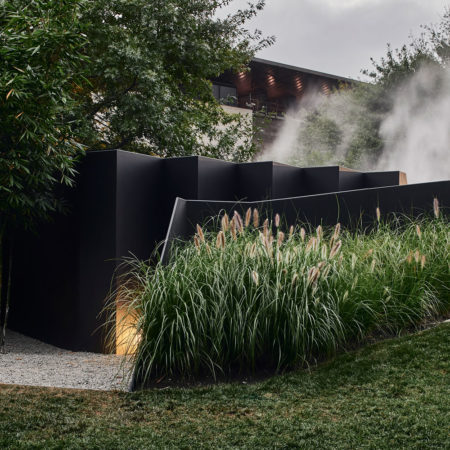 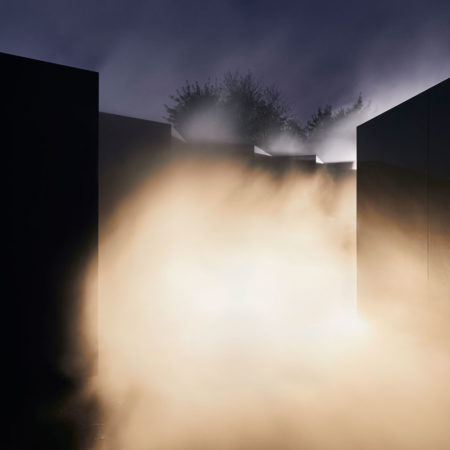 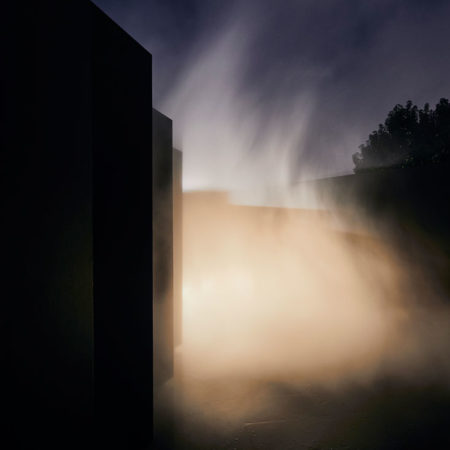 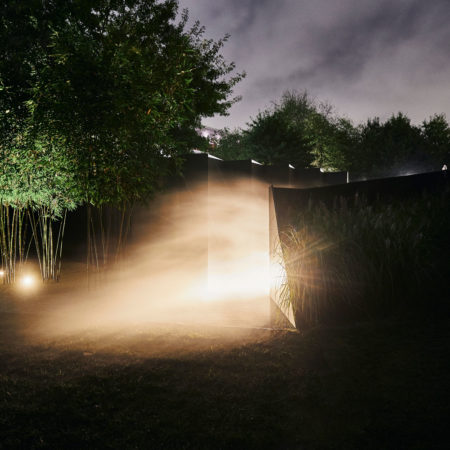 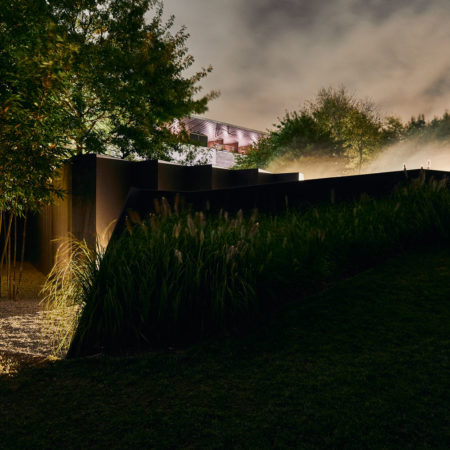 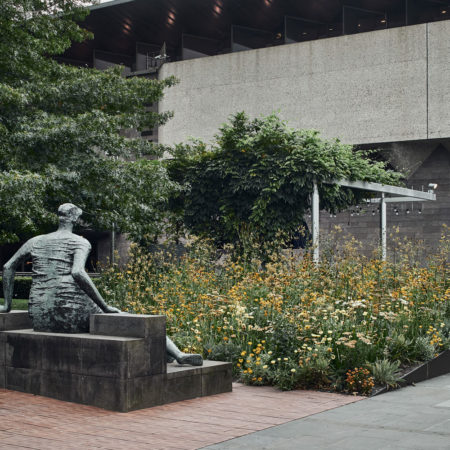 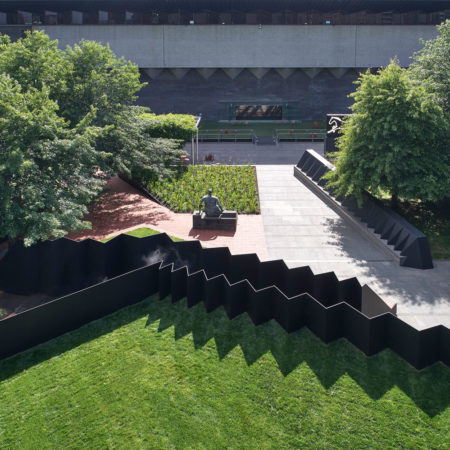 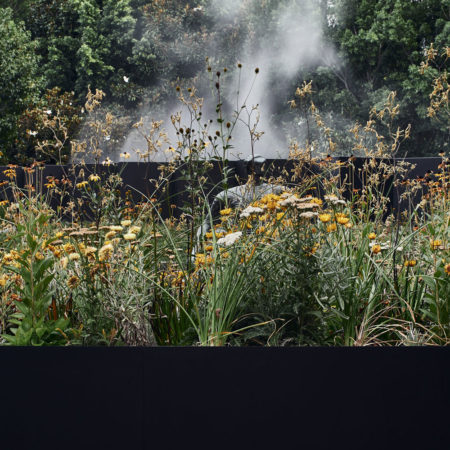 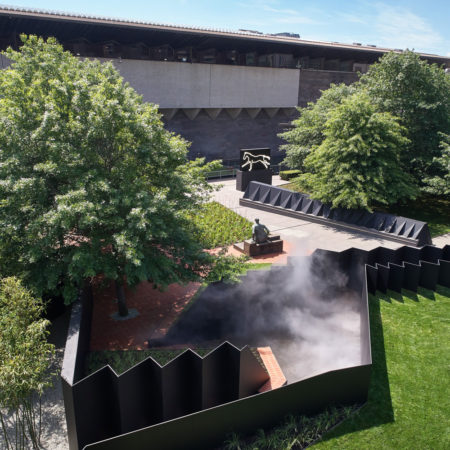 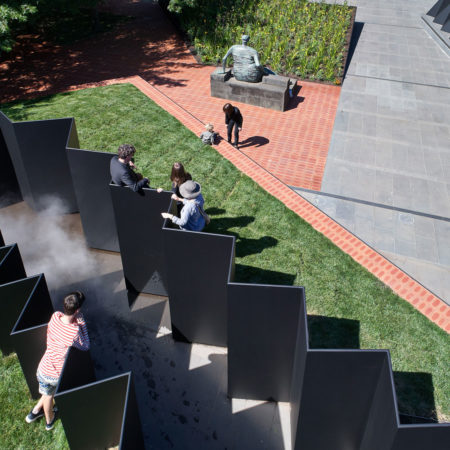 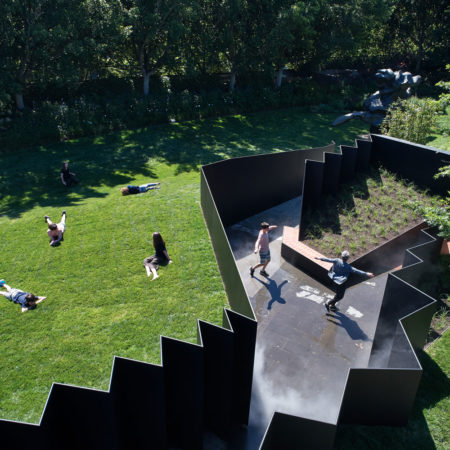 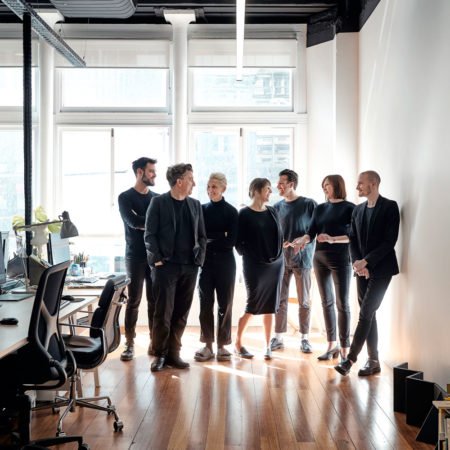 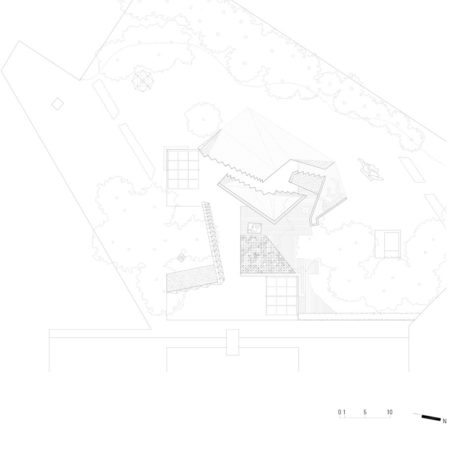 As landscape architects, are we place makers or agitators of place? The project is about places that provide new spatial memories and an architecture that enables a landscape to be occupied – an inclined, grassed lawn to be sat on, leant on and inhabited. The generosity of these civic spaces allowing public occupation and engagement.

‘Doubleground’ functions as a tool to engage with what the garden is and what it can be. An opportunity to celebrate the role of gardens within the civic realm by curating spaces for the body: room, corridor and field. Interior spaces and landscape spaces define folds in the topography of the garden and create a literal double-ground – an opportunity for landscape to create civic generosity while leading an architectural discourse.

This is why we’re submitting ‘Doubleground’ for consideration:
‘Doubleground’ shows the way in which small scale, low cost, collaborative and multi-disciplinary interventions can create tipping points within an existing landscape condition that comprehensively transform that landscape’s ability to invite, hold and engage visitors. It contains tactics for unearthing and presenting site narratives and histories that are not objective and clear in the manner of the gallery guide, but that are difficult, coded and immersive – narratives that need to be experienced to be told.
‘Doubleground’ shows the way in which smaller and ephemeral works might be recast not as flimsy or pop-up constructions, but as projects that reveal the permeant potential of the temporary. This project’s language and attitude toward embeddedness and heaviness is repeatable and scalable.
‘Doubleground’ shows the way in which seasonal planting might charge small civic spaces and how immersive and rambunctious vegetation can create its own kind of exchange – between garden and viewer, between viewer and time and between the viewers themselves
‘Doubleground’ shows the way in which a garden or a small civic space might be self-programming, and self-engaging though design. The project’s provision of landscape rooms, elevated planes and inclined surfaces create permission to occupy and that occupation becomes its own event. It doesn’t need a screen or a café.
‘Doubleground’ shows the way in which sustainability and re-use might be agents of design as well as metrics to deliver the commission efficiently. Minimizing of onsite work through off site pre-fabrication of structural elements. The use of economic and robust materials that are elemental and screw fixed for ready dismantling and reuse. The proposed re-use of planting post-commission to assure a legacy and enduring memory.
The metrics of ‘Doubleground’ are:
7 design team members
8 consultants
22 weeks of documentation
8 weeks of construction
515 panels
228 varying CNC cutting angles
88 trusses
5720 bricks
92 m3 of new soil
132 m3 of void former
220 m2 of new turf
352 m2 of new landscape
1335 new plants
15 bamboo plants
360 kangaroo paws
420 foxtails
540 flowering plants
21 species