The formation of a personal design philosophy is a journey that Enea identifies as beginning in Italy where childhood summers spent on his grandfather’s farm rooted the mystical properties of nature in his mind. Handcraft was a strong family tradition, and times spent helping his grandfather build stone fountains introduced him to the therapeutic properties that stone and water lend to a garden and engrained a life-long appreciation for handwork and high-quality materials. Travels as a young adult reinforced his underlying belief that variations on the basic elements of light, vegetation, stone, and water are what give a location its sense of place.
After joining in his father’s garden decoration business as an adult, Enea had the desire to put these principles into practice. He expanded the current operation into a garden design-build firm where he could fulfill his desire to create transformative spaces that would impact people as he himself had been. The company became known for production of high-quality gardens, and the philosophy began to concentrate on preservation: of agricultural and horticultural practices, of handcraft and of the sense of place.

Currently, Enea is an international company for Landscape Architecture. The firm is widely recognized for its abilities to deal with complex design, planning, and creating made-to-measure gardens for private and public sector clients. Sociology and functionality are the two most important aspects for Enea to take into consideration when designing spaces, as it is the way in which an individual lives and interacts with the space that is at the center of an Enea garden. Genius loci – the way of life, the place, and architecture are what inspire its designs. With offices in Rapperswil, Zurich, Miami and New York, a work force of over 200 employees with a wide variety of backgrounds, on three locations in different climate and cultural areas, Enea is s truly global company.

Tree Museum, Park, Arboretum Situated on 75’000 m2 of land near Upper Lake Zurich, the Enea Tree Museum was opened in the year 2010. The 10’000 m2 open-air museum is divided into a series of rooms whose first mission is to emphasize the exceptional presence, beauty and rarity of the exhibited trees. With the Tree Museum, Enzo Enea has accomplished his vision of combining landscape, botany, art, architecture, and design. The Museum features approximately 50 trees representing more than 25 varieties – several specimens which are more than 100 years old – help to create an awareness of time. An additional 100 trees and plants are located in the Park which surrounds the Tree Museum. The collection contains more than 3000 exclusive wood species and is solely composed of varieties which belong to our climate zone. 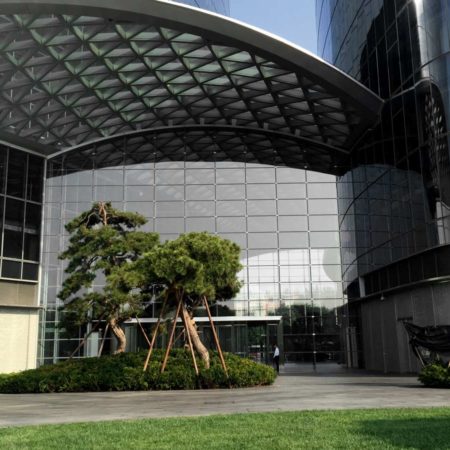 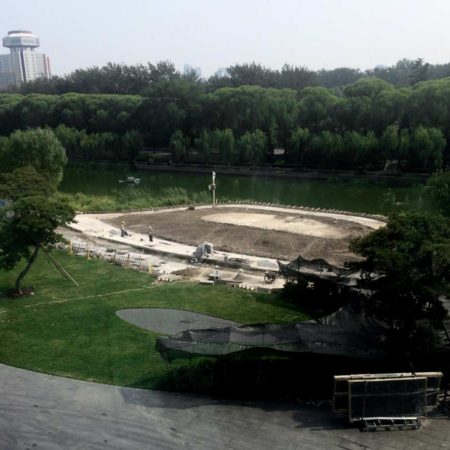 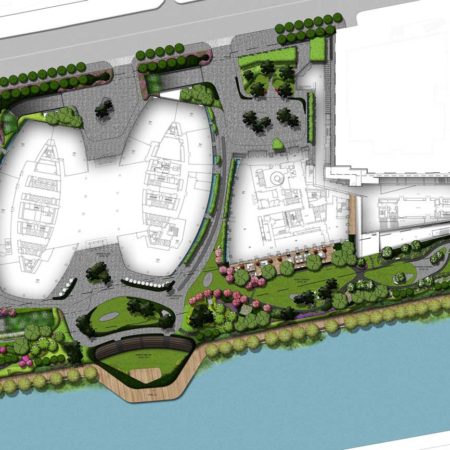 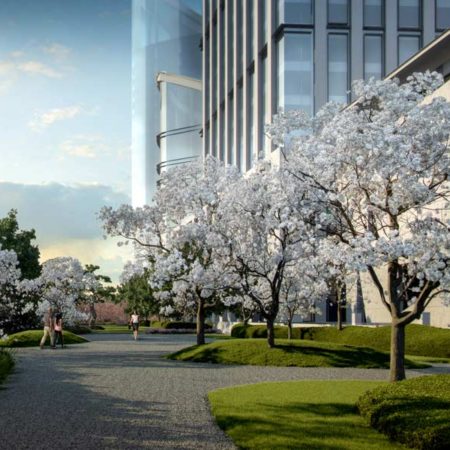 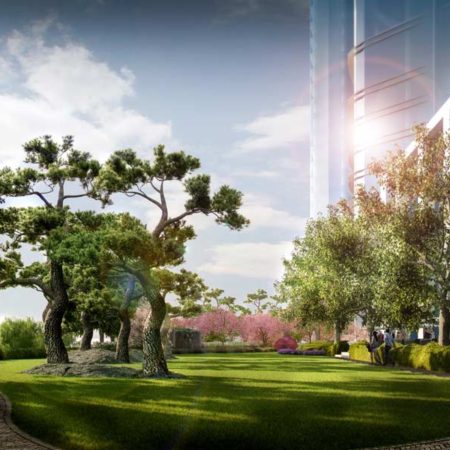 For this project particularly, we wanted to stay true to our client’s idea of developing a holistic project that touches and transforms society through art, design and nature.
Through the abstract interpretation of concepts learned from the traditional Chinese gardens and a clear strategy for the spatial articulation for each programmatic area, we developed a succession of scenes that unfold from one another, creating a comprehensive narrative that takes the visitors through a visual and emotional experience. We sought inspiration from the traditional Chinese gardens and design concepts, the use of color and meaningful vegetation, the balance of yin and yang, the layering of subtle dualities and of course, the impressive native plant species, especially the magnificent Chinese pines which are living sculptures scattered throughout the site and holding the project together.
The river is an important source of inspiration as it gives the entire place a distinctive atmosphere, and the entire project unfolds from it. Its soft lines informed the geometry, and the inclusion of these islands and rocks within the geometry articulates and holds the place together in harmony, giving deep meaning to these gestures: rock = island = mountain= virtue, stability and endurance. The use of the Chinese pine (representing resilience and longevity) creates a common thread, a landmark throughout the entire project as part of the main concept. The project starts with the water and the public experience along the promenade through the drooping willow trees and then turns inward into more private, intimate moments, curving to unfold new experiences and views as would a meandering river. 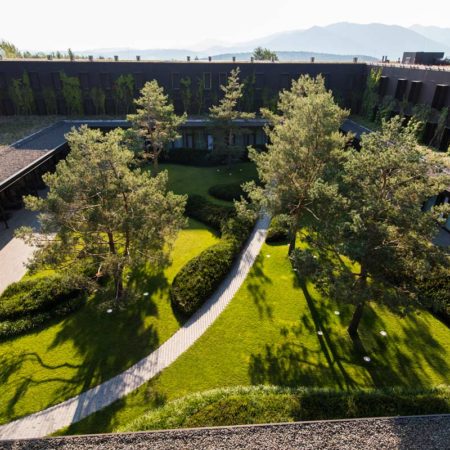 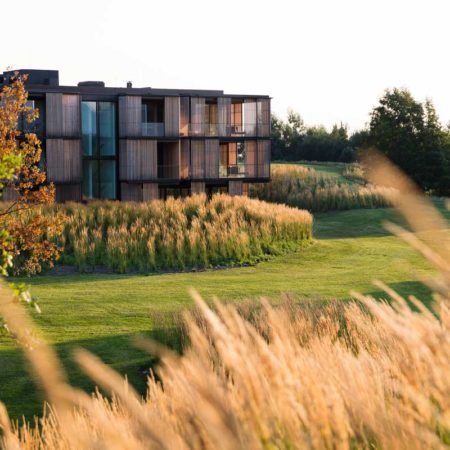 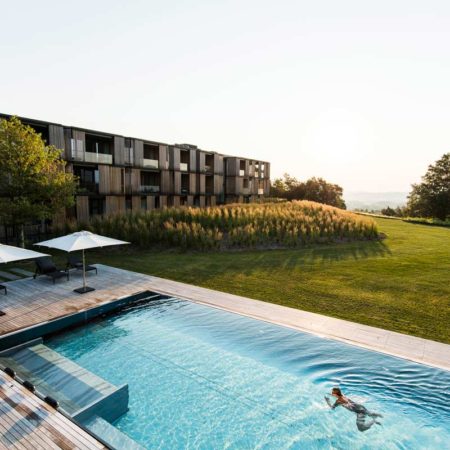 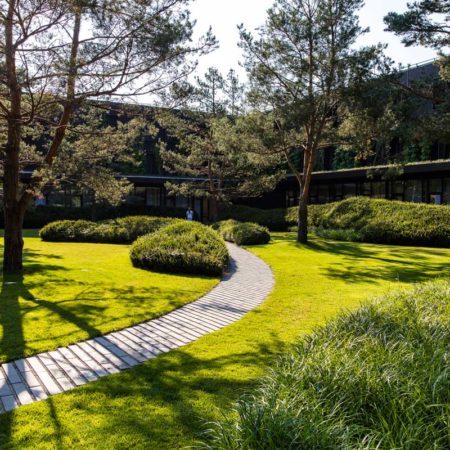 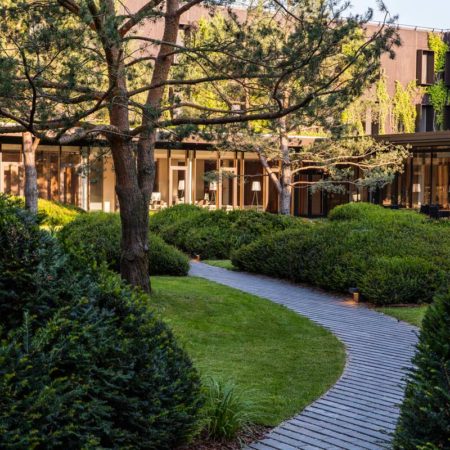 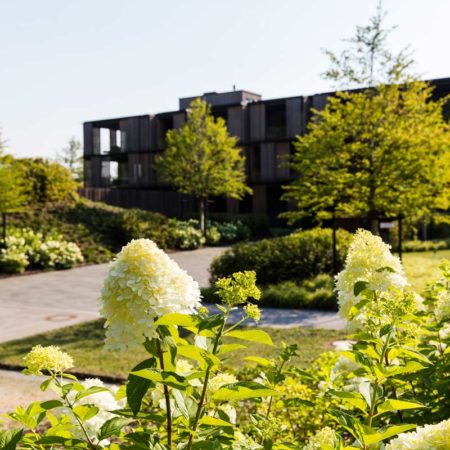 Lanserhof is an award-winning, modern health resort focused on the healing and enduring health of its guests. Located high above Lake Tegernsee in Germany on a 21,000 square-meter site, it is considered one of the most innovative health centers in Europe. The primary objective of the landscape was to create intimate, programmatic outdoor rooms while keeping the overall character of the site harmonious. A modest plant selection keeps the entire site calm while enhancing the views toward the Bavarian Alps.
Considered the heart of the project, the 1600 square meter inner courtyard is minimalistic, zen-like and evergreen. Featuring six picturesque Scots Pine trees and dark waves of Yew shrubs, it reflects the native landscape of the Bavarian Alpine foothills. This is where the interior meets the landscape. Floor-to-ceiling windows extend the living spaces into the courtyard while bringing nature indoors. The balance between enhancing and obstructing views played an important role in the positioning and choice of planting and site elements in the overall project.
The concept of the surrounding site was for the building to be enveloped by its surroundings – for the landscape to engulf the architecture. Topography was transformed to frame the views toward the Alps while blocking unwanted views for privacy without the need for fences or other barriers. Undulating, dune-like grass mounds hug the architecture and invite guests to stroll through the landscape by a series of paths. Waving grasses connect the main resort building with the spa which features an outdoor salt water pool surrounded by a spacious wood deck. Majestic Oak trees encircle the spa and create a tranquil, intimate environment within the larger native grass/meadow landscape. 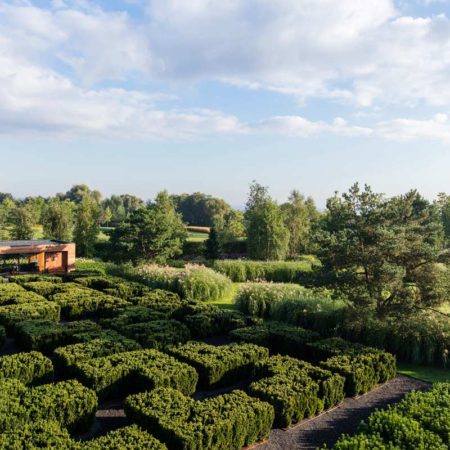 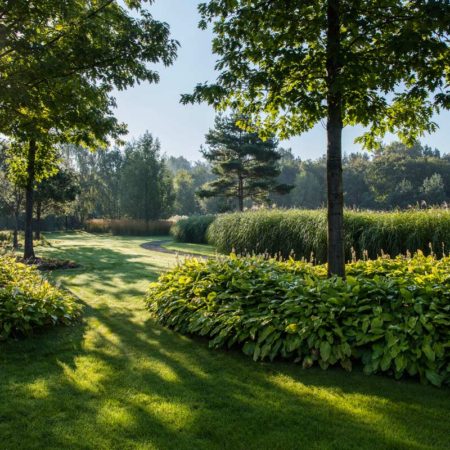 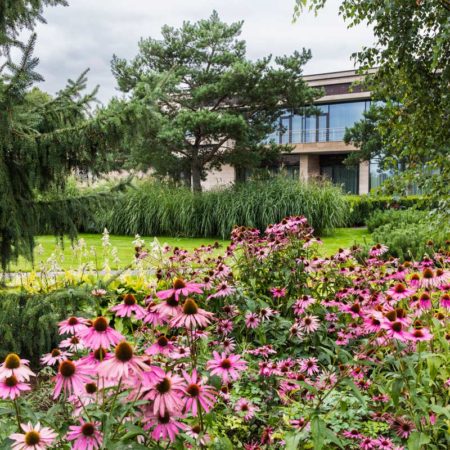 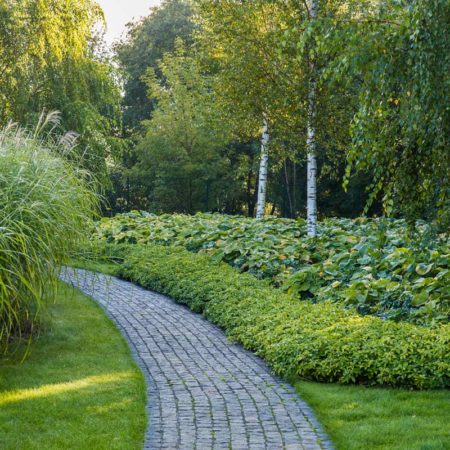 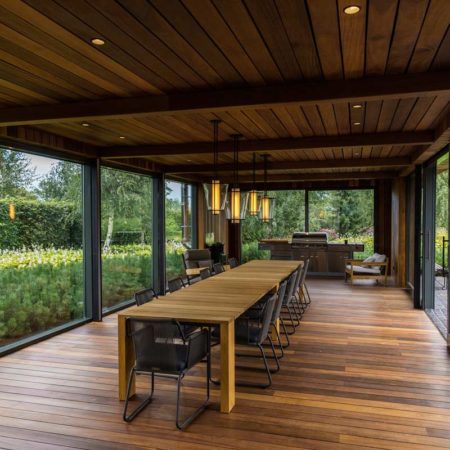 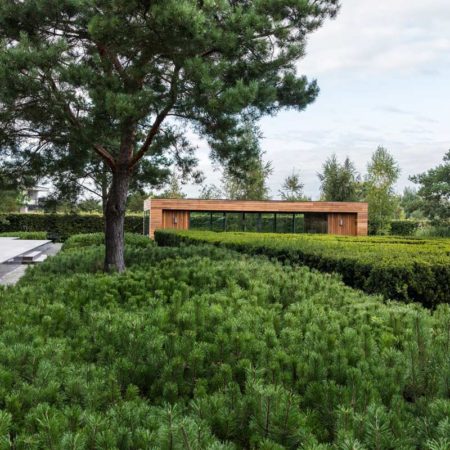 Located on the banks of the Moscow River, this 4.25-acre plot of land with a newly-built modern house was devoid of vegetation, a blank canvas before the landscape architects became involved.
An immediate challenge for the design was to integrate the modern travertine-cladded, rectilinear house into its natural surroundings. To connect the angular architecture with the undulating river, the garden had to be an aesthetic marriage of the two opposing elements. A buffer zone was created between the two, where nature meets man. The wooden and steel barbeque pavilion, which functions as a kitchen and dining room, floats on a cloud of Mugo pine, and to get there, one walks through the labyrinth of juniper. Beyond this evergreen procession, the garden becomes more sinuous and continues with a meandering path through drifts of grasses and perennials, expanding onto a generous lawn and contracting into enclosed spaces shaded from and surrounded by groves of trees.
Another challenge for the landscape architects was designing and constructing in relatively hostile conditions. The permafrost line is located a mere five feet beneath the surface, and above it, the water table sits with very poor drainage. The water table is captured in a circular reflection pool and is utilized to irrigate the garden during the scorching summer months. In winter, the temperature drops below -5 degrees Fahrenheit for long periods of time, so the planting scheme is composed of only the most resilient species which can survive such conditions sustainably. The longevity and sustainability of this garden were key to its success. 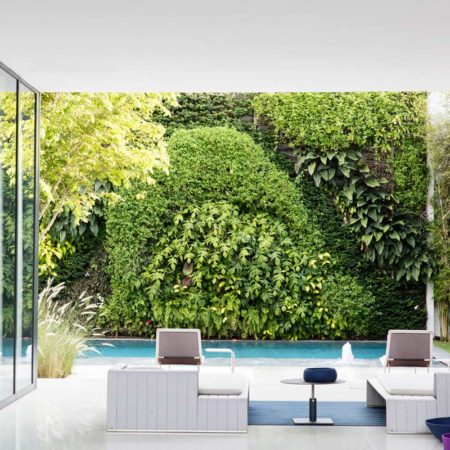 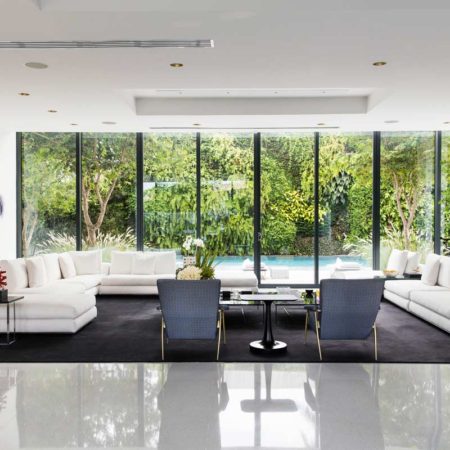 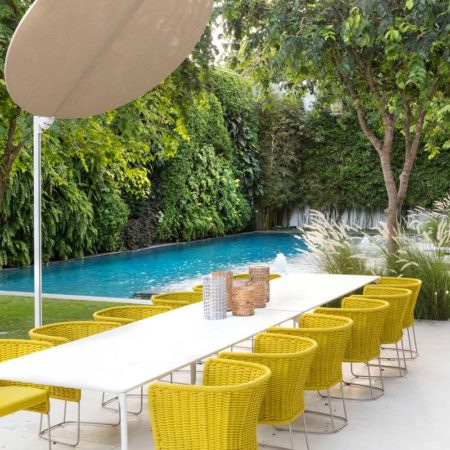 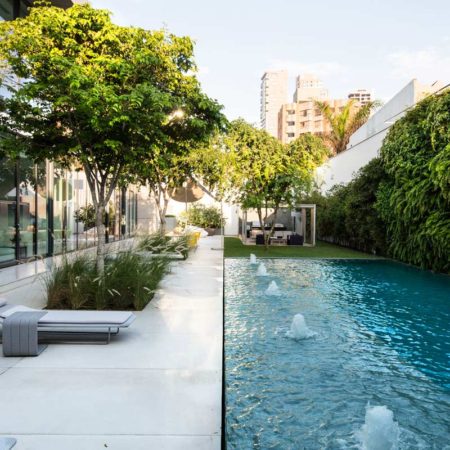 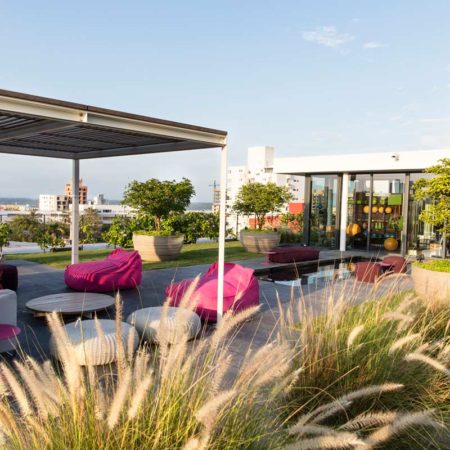 This tropical garden is located in Colombia’s port city of Barranquilla. Just like the architecture of the house, the garden is defined by very clean modern, lines contrasting with the lush green and exuberant textures of the selected plants. The idea of the garden was always to create the backdrop for the crystal prism and achieve a truly seamless integration between interior and exterior spaces. In a tropical climate like Barranquilla’s, where temperatures can go well over 40 °C, such relationship requires careful study to create a microclimate that would allow the family to really enjoy the outdoors. Several species of trees native to the region were used to give shade and privacy to the interior spaces. One of the features of the garden is the 100 m² vertical garden adjacent to the pool filled with orchids and ferns. The garden also features a roof top terrace that overlooks the sunset and Magdalena River in the distance. 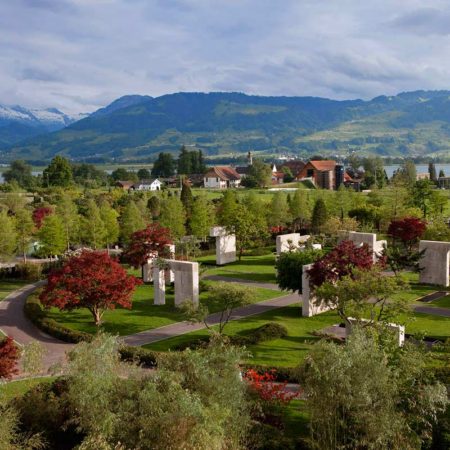 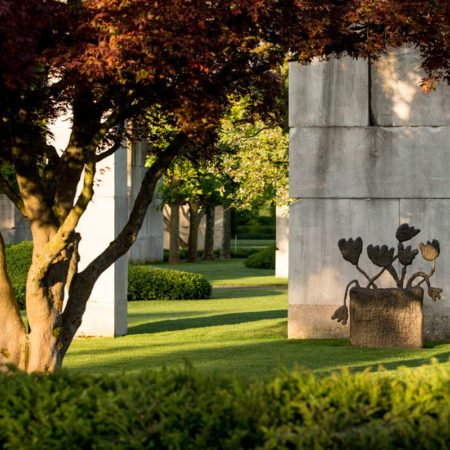 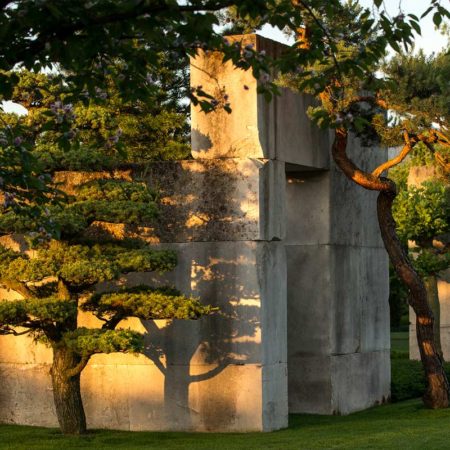 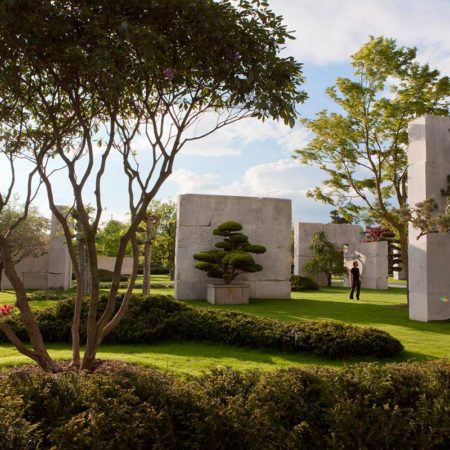 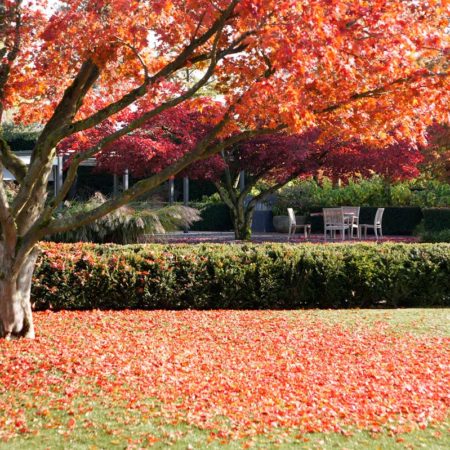 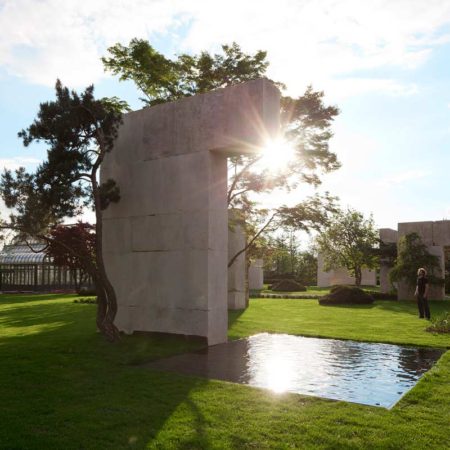 Having outgrown its previous location, Enea sought to create a new headquarters. They welcomed the chance to expand for future prospects, but also took the opportunity to reflect on the company’s roots. The resulting design bridges the technical and philosophical faces of the firm, providing facilities that meet the everyday needs of the operation, while memorializing important aspects of its past. At the heart of the complex lies the Tree Museum. Here, materials and elements reflect early traditions and influences of the company, while celebrating the character of its surroundings on the shores of Lake Zurich. Specimen trees become the focal point of garden rooms, each contributing their own story to the narrative. Having been salvaged from former historic landscapes, the unique collection of trees preserves stories, documenting ecological, historical, personal, and horticultural moments from the region’s past.
Prior to founding the garden design company, Enea had noticed a disturbing phenomenon on construction sites around the region. Majestic, mature trees were often falling victim to the chainsaw, cut down to make way for modern roads and structures. These trees had formed an important part of the historic landscape, each one having a unique story to tell. He began to negotiate with owners, hiring crews to relocate the trees using both traditional practices and new technology. The trees were brought to his private tree nursery, where they were lovingly maintained for the last 22 years, and their stories thus able to be passed on.
Massive stone walls constructed of sandstone were erected throughout the outdoor museum. The solid blocks, sourced from the same Italian quarries used by the owner’s father, grandfather, and generations before them, form architectural garden rooms, their tops evoking the staggered mountains in the distance.
Image Credit: Martin Rütschi