The large residential complex of Forum City marries a dynamic metropolitan lifestyle and an intimate urban experience. 9 connected towers offer panoramic views over the city. The design restores the original block pattern of the urban plan while creating an engaging street-level atmosphere. The buildings are integrated with ambitious landscaping to make healthy and lively environments to suit every resident and commercial user. The design brings together urban planning, architecture, and landscape design, to solve some of the most pressing problems facing inner-city life today. 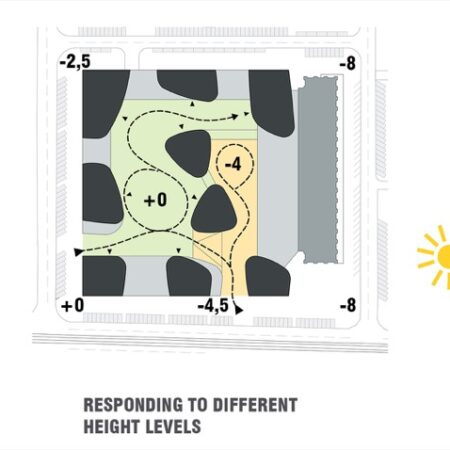 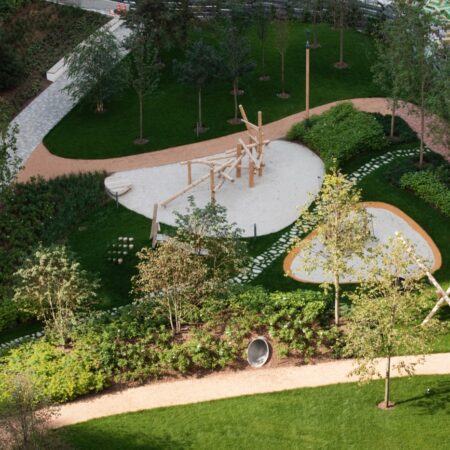 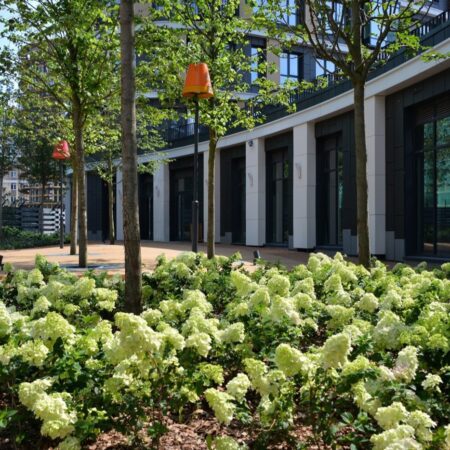 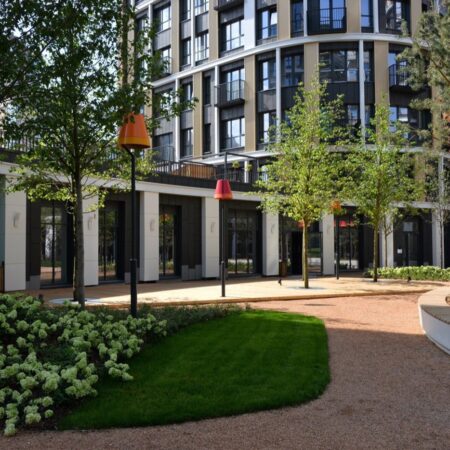 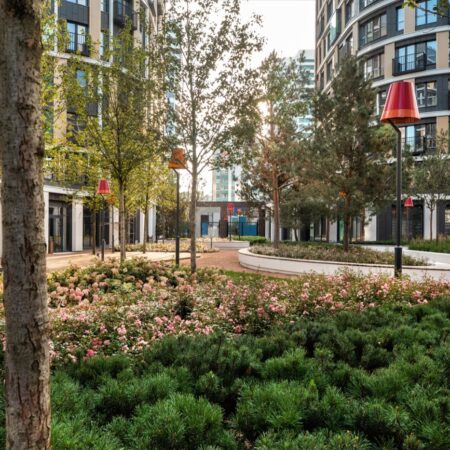 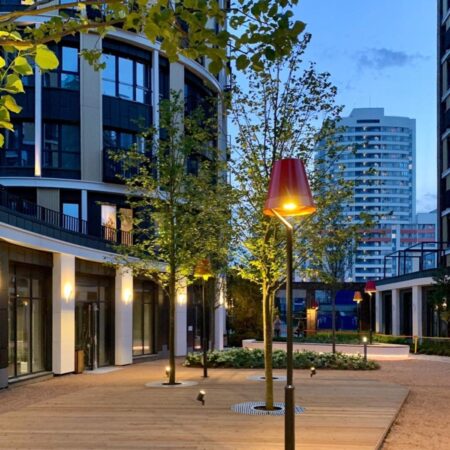 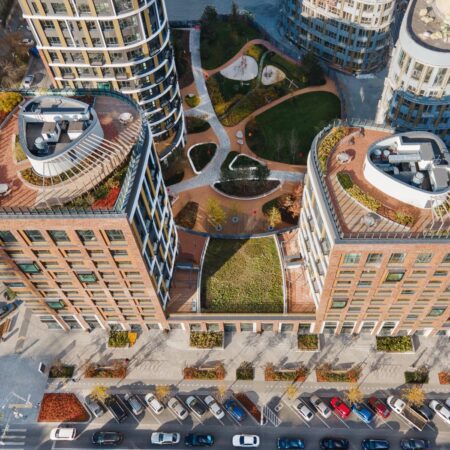 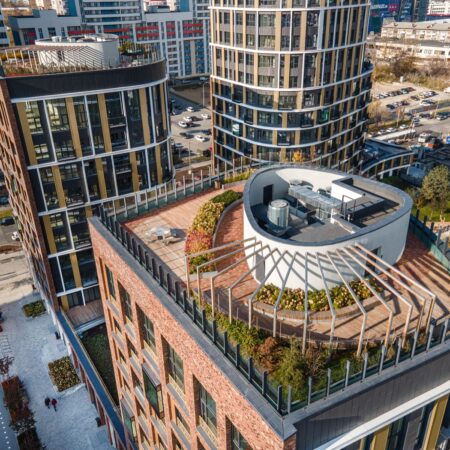 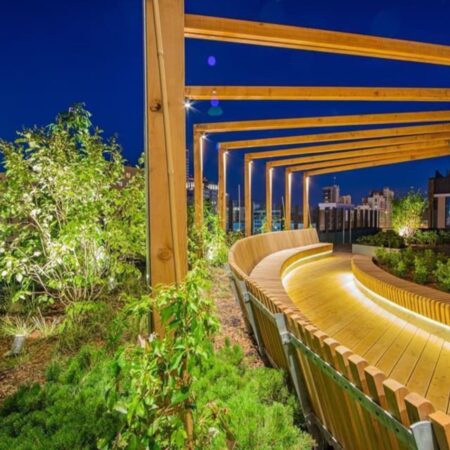 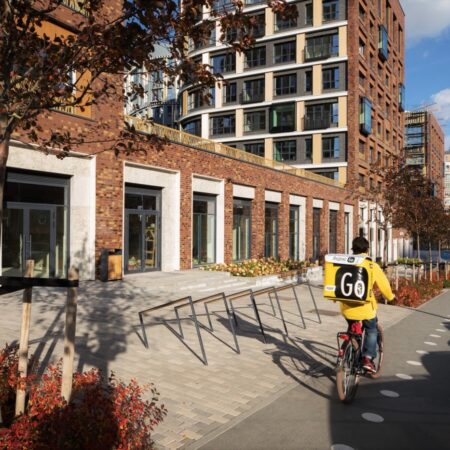 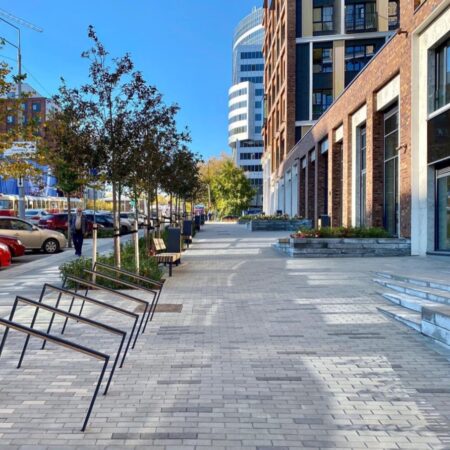 One of the problems in the centre of Ekaterinburg, the Sverdlovsk region’s capital with over 2 million residents, is the lack of human scale and public space fragmentation. The original city layout has been broken by subsequent changes and modifications, resulting in a loss of connection between urban form and its functions. It became especially visible in many central residential neighbourhoods. Combined with an apparent lack of coherent green street infrastructure, it can create a bleak experience, especially during cold Ural winters with harsh winds blowing the air that reaches temperatures well below -25 centigrade. Equally, in summer, when continental air from central Asia can elevate the temperature to blistering +30 centigrade, lack of shade and omnipresent concrete can make the streets very unwelcoming. It was the case in the Forum City complex area.

The straight grid is a key historical feature of a city-plan development. But it was often lost because subsequent modifications did not follow the pattern. Forum City attempts to repair Ekaterinburg’s historical urban grid structure. As a result, the designers created a European-style metropolitan experience combined with a green city oasis at its core.

Even by European standards, the green spaces created for this project are ambitious. Amsterdam practice LEVS Architecture worked together on this project with a landscape studio S&P Landscape Architecture. Both companies share the ambition to use a strong blend of architecture and landscape as a design method to deal with concerns over biodiversity, climate change, and quality of life in densely urbanized areas.

In the whole Forum City project, a total of 150 mature trees will be planted, and thousands of shrubs and flowers will be spread out over the inner park, terraces, and rooftops. Trees are commonly planted as saplings that still need a few years to mature. Planting mature trees, in this case up to 25 years old, have two important advantages. Firstly, their contribution to the air quality of the neighbourhood is immediate. And in the summer, the first renters can enjoy the shade of trees and the cooling effects of large amounts of green areas around them.

By planting a wide variety of tree species, the park will have an ever-changing colour palette year-round. From evergreen silver pine trees, Canadian hemlock, and mountain shrub pines to different green shades provided by several maple and lime species that turn yellow, orange, and scarlet in autumn. There are exciting landscapes to explore 12 months a year. Flowering hydrangeas and roses enhance the colour range in summer and different bark colours of various dogwoods and willows in winter. Notably, the landscape hides 3-4 story underground car parks. Often, in other projects, such structures only allow for some grass and shrub cover. But here, the latest green roof technology was used to ensure stable soil conditions.

Places along the surrounding streets that typically host cars were transformed into green boulevards and squares, where pedestrians and bikers share public space and where trees and plants mark ideal sites to meet a friend or take a break. Linear avenues planted with linden and ornamental crab apples add to the visual appeal of the development. They also help organize the surrounding public areas into zones suitable for different users, making the green spaces safer and appealing.

It is not a coincidence that European offices have been involved in this large inner-city transformation project. One of the great opportunities while working in Russia is to significantly transform people’s quality of life, not only inside the buildings but also within the surrounding residential and public environments. We can draw considerably from our working experiences in Europe, where there is a strong tradition of combining the dynamism and activity of a large city with a secluded neighborhood’s intimacy. Many residents of Forum City aspire to have both. Open spaces between the towers and the intimate, layered park with easy transitions from semi-public to private areas are intended to mix these two complementary lifestyles. It is a 15-minute neighbourhood, where all functions are within easy reach. The plan functions like a small city within a bigger city: from compact apartment to a luxury penthouse, from sky-bar to a bench in the park, from bicycle stand to parking below the trees, and from the medical center to the Sunday market. Dreams for a new type of metropolitan, sustainable living environment in an inner-city are becoming a reality, also in Russia.