The Francois Mitterrand Strip is a major historic site for the city of Rennes. Constructed in 1682, it came to being at the foot of ramparts and dominated the swampy confluence of the Ille and Vilaine Rivers. First flanked by canals and four rows of trees, it went from a place for strolling and being seen, to a more functional location absorbed by the city’s grid of roads. Over time, construction projects replaced the canals and the original horizon literally disappeared with the growth of the city. Following the advent of cars, the strip became a vast car park in the 1970’s, for which the ground and the underground levels showed evidence of opportunistic construction work serving typical, evolving urban needs. 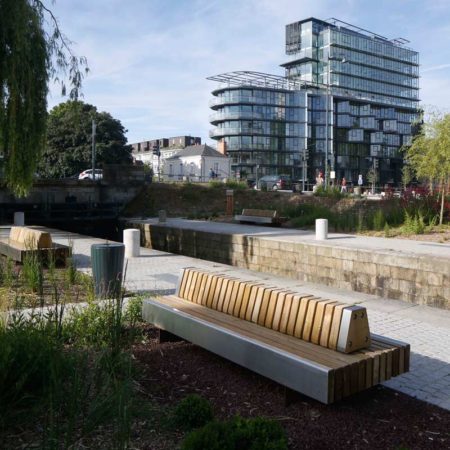 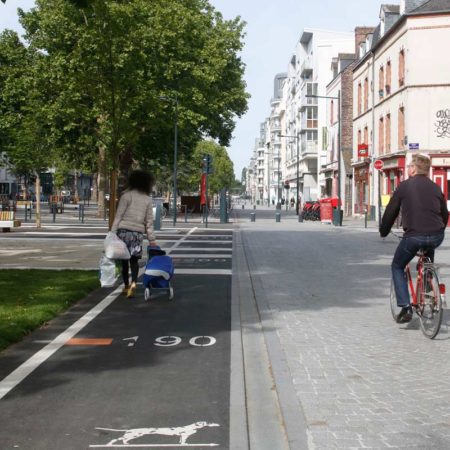 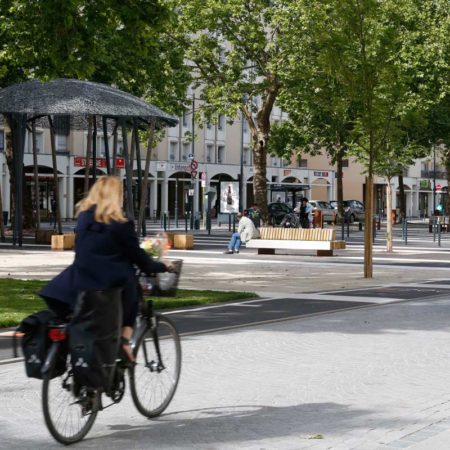 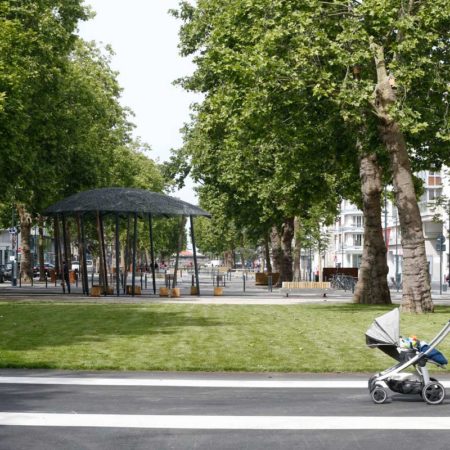 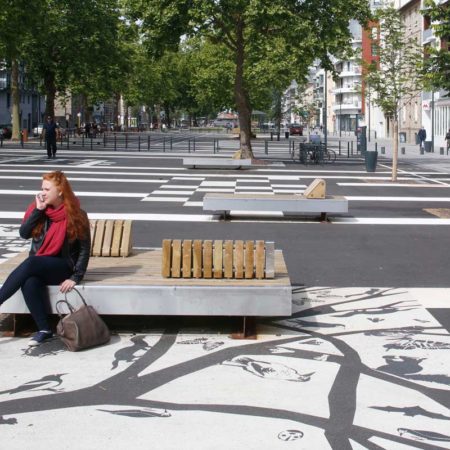 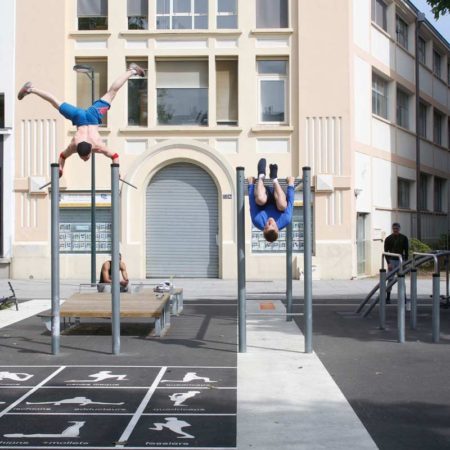 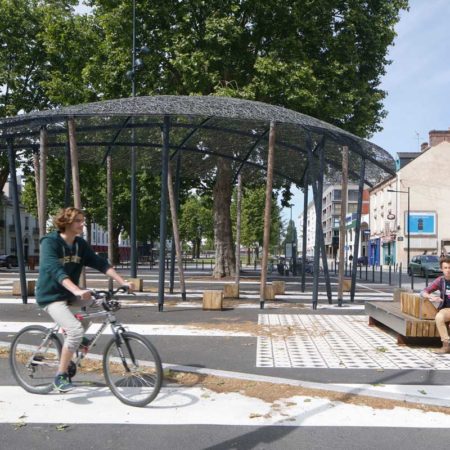 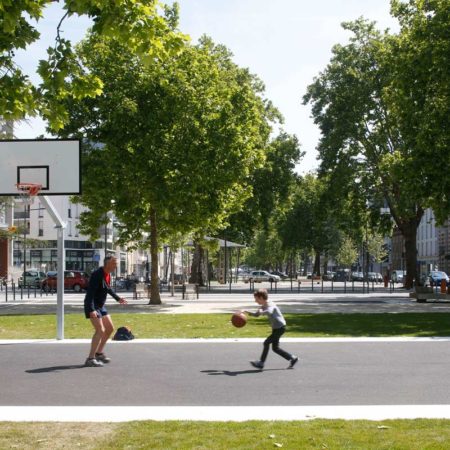 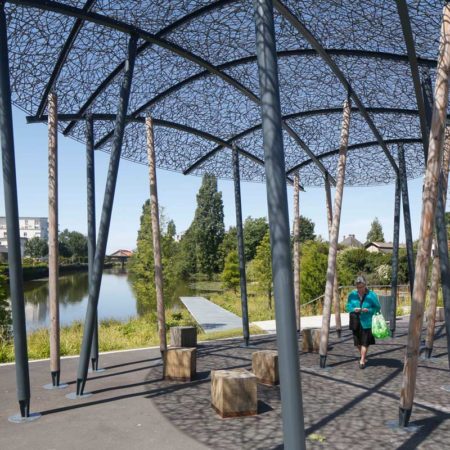 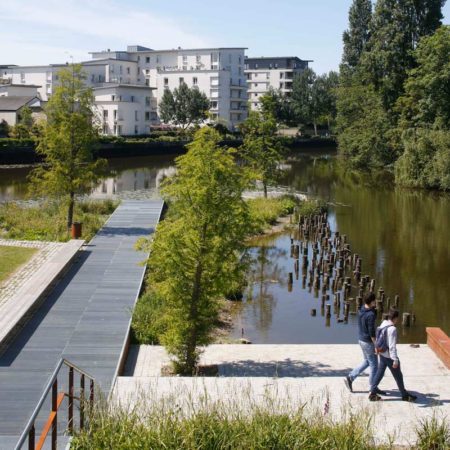 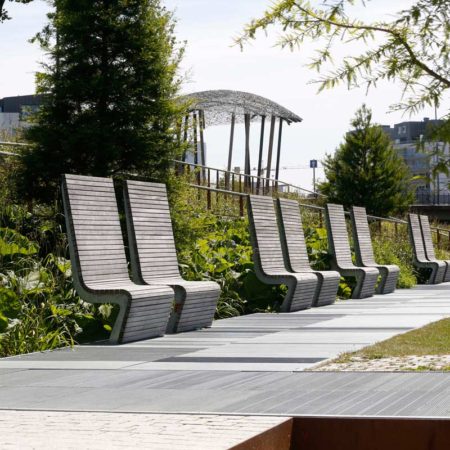 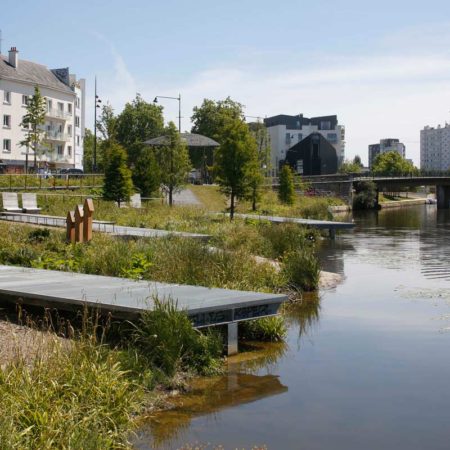 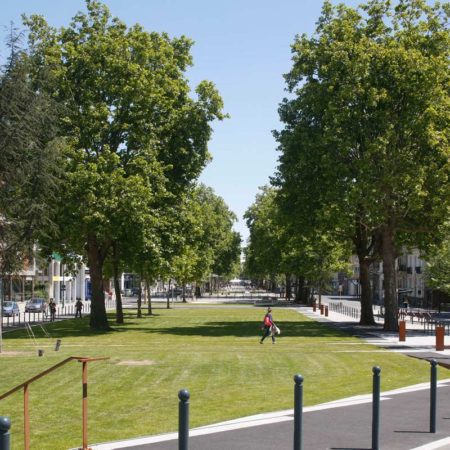 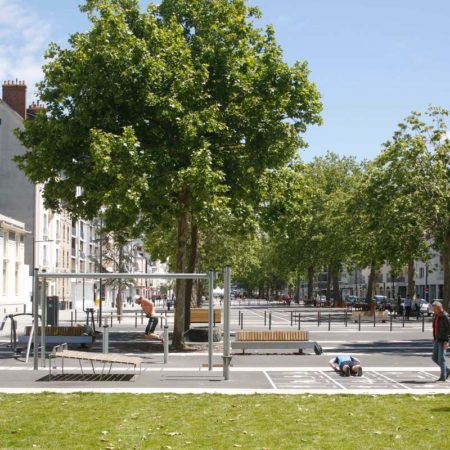 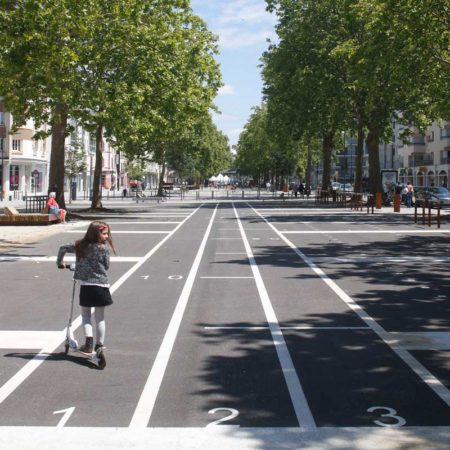 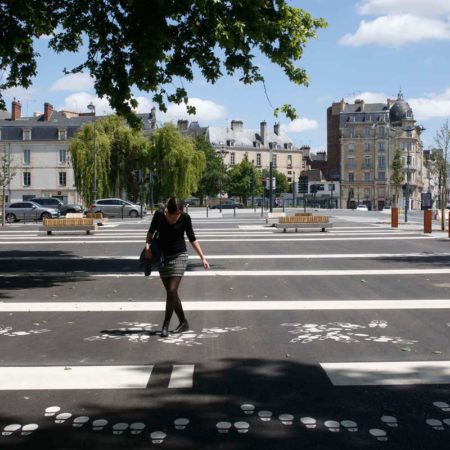 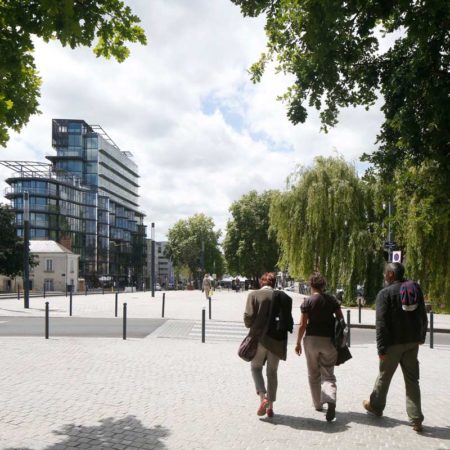 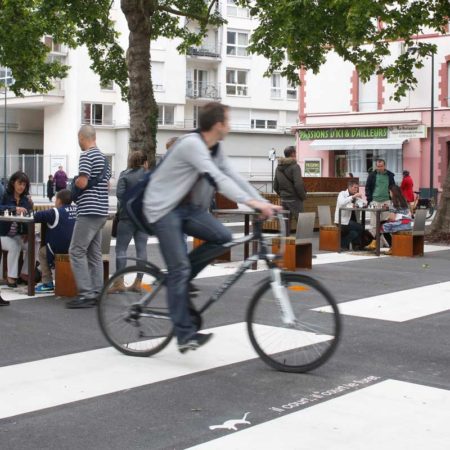 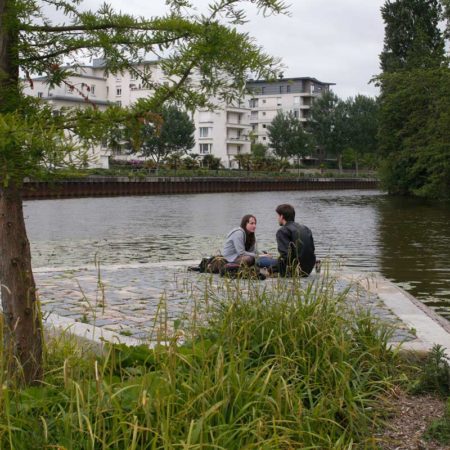 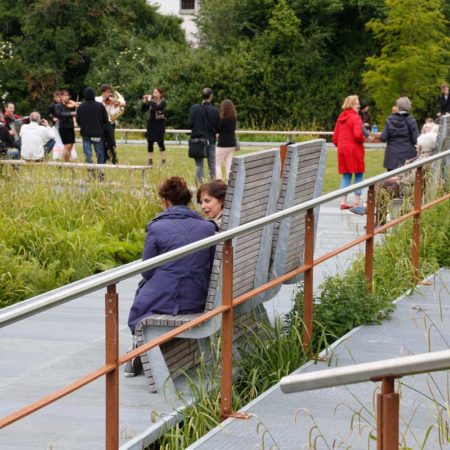 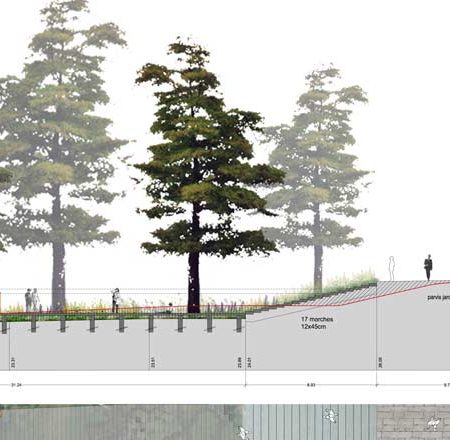 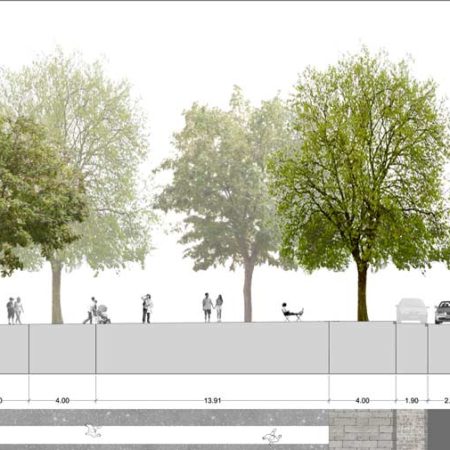 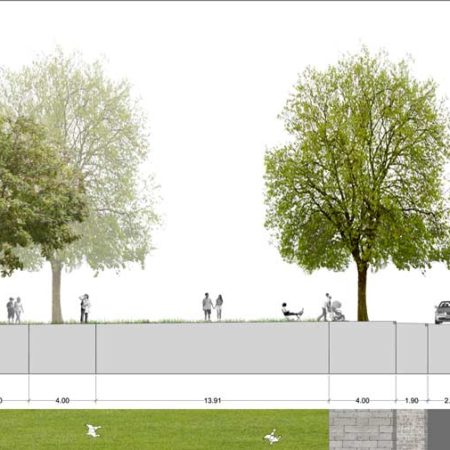 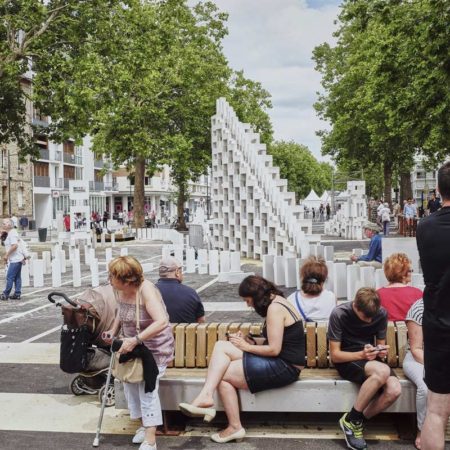 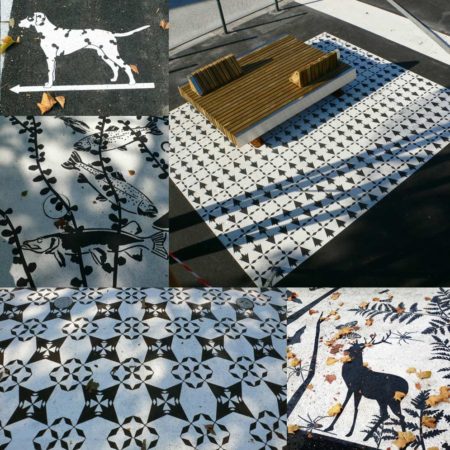 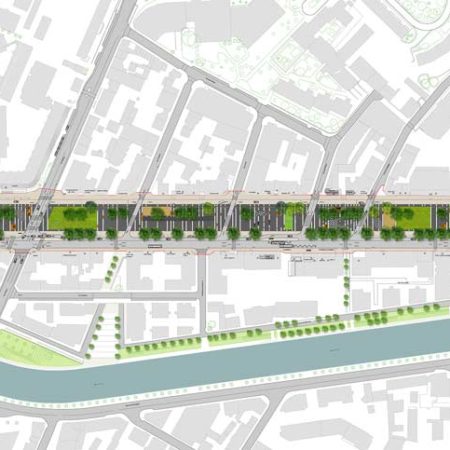 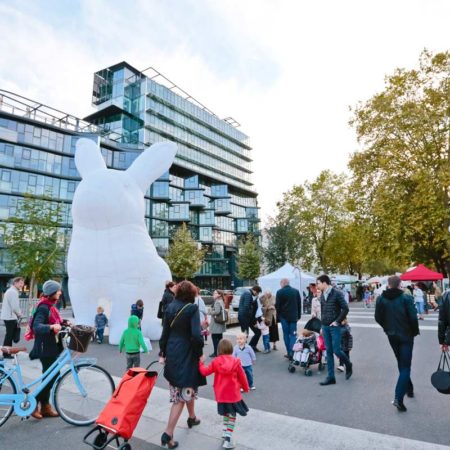 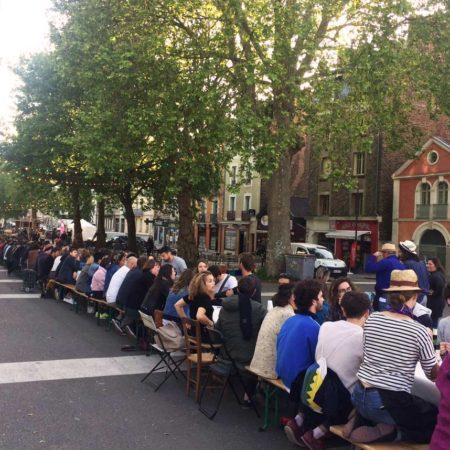 The principal constraint for this major axis was the East-West bus line, and the desire to conserve one road that remained separate from regular traffic. The 50-meter width and the 850-meter-long strip were supposed to contain cars in the north, buses in the south and a central median lane for pedestrians. After comparing results of this layout, we suggested moving the pedestrian median strip to the north instead, so as to offer better contact between the pedestrian space and the commerce on the ground level, thus favouring a southern exposure. The flow transferred to the south enables parking and traffic to remain in the shade during the hot season.

Along with the layout for traffic flow, a response was needed for the garden dimension of the program. The idea of once again invading the space with plant life where vehicles had been, didn’t seem to fit with the location. A space was needed that would be open to the breadth of the city’s different uses. A versatile location capable of conversion in case of needing to install a weekly farmer’s market, or organizing other events. However, instead of the deformed, unplanted spit of land at the water’s confluence, we proposed a garden marked by the influence of water and seasonal high waters.

We didn’t want a project that would simply be the outcome of physical limits and the surface material on the ground. Black and white – references of Brittany – were therefore chosen, as well as a design of white lines, which expand or narrow down spaces, giving them measurement. The choice of a shimmering, asphalt concrete for the heart of the strip reflects the desire for diverse uses of the space, while the humid climate meant surfaces that could easily get dirty had to be kept limited, such as stabilized soil, which was reserved for boules games.

In the light, this material vibrates like granite and offers the advantage of a smooth, very comfortable surface. The ground becomes like a large black board on which new uses are given free range. In order to encourage new activities, we suggested gymnastic apparatuses for seniors, adults and games for children. Hopscotch patterns drawn on the ground, and painted mats include patterns for children or dance steps. Rollerbladers find great surfaces for slaloms and a measuring scale allows joggers and walkers to measure their steps.

The François Mitterrand strip is thus in the process of becoming a major public space again, that is welcoming and comfortable, as it once was.
The project was the trigger for a real urban transformation of this part of the city. It now offers to the inhabitants a large open space where they can find various uses, where they can meet, pic nic, walk, go to an organic food market, play, go to concert, rest on the sun… The city of Rennes really takes over the landscape paysagiste after the inauguration to support this place and make it even more alive.

Fews videos are available on you tube 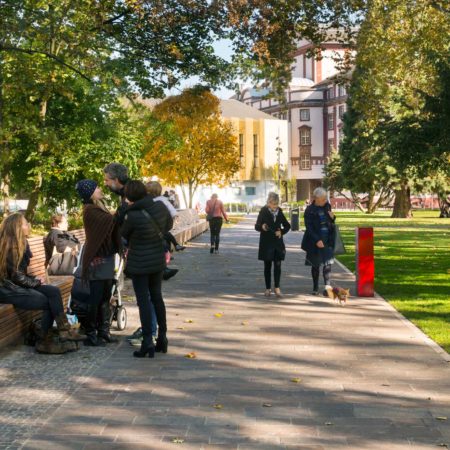