Landezine
International
Landscape
Award
Garden in the village of Zaymishte

The task was to design a garden for a young family on a small plot of land (Sgen.= 1000 m2) with changes its level up to 2.5 m. Among the clients’ requirements was a parking place for two cars covered by shade structure, a vegetable garden, and a lawn for outdoor games with the dog.

We began work when log constructions of the two-storey house and sauna, joined via an open gallery with the summer kitchen, and the swimming pool had already been built. There was an old apple tree, several plum trees, some grapes, and a big walnut tree (Juglans regia) on the land lot.

The buildings, swimming pool and pavement take 50% of the plot territory. 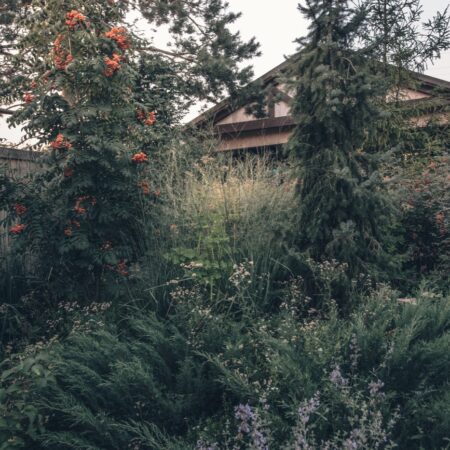 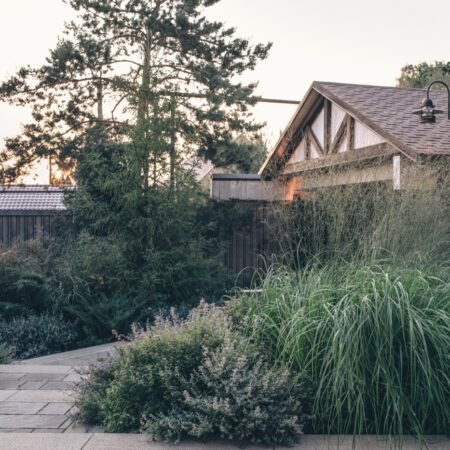 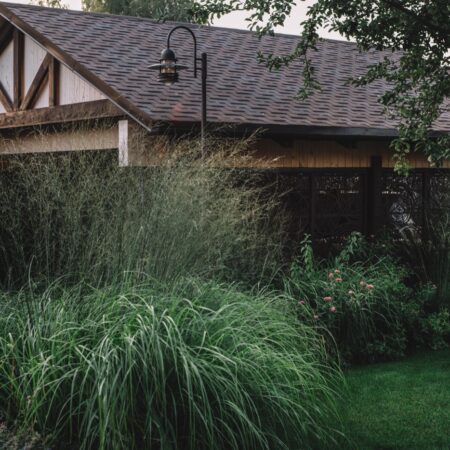 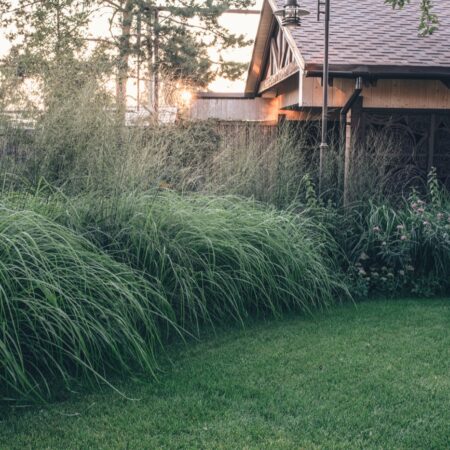 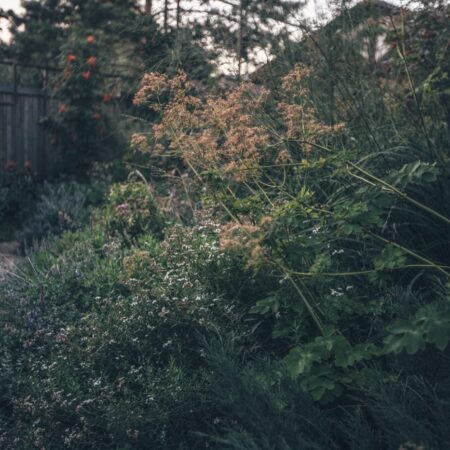 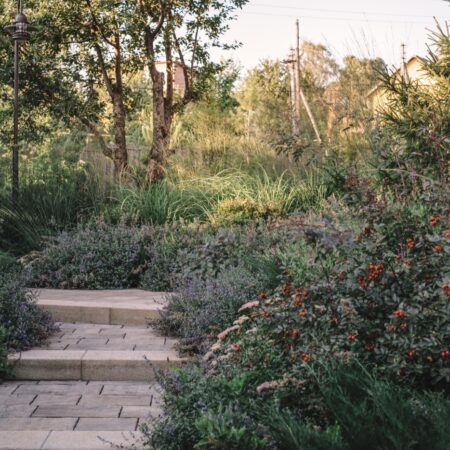 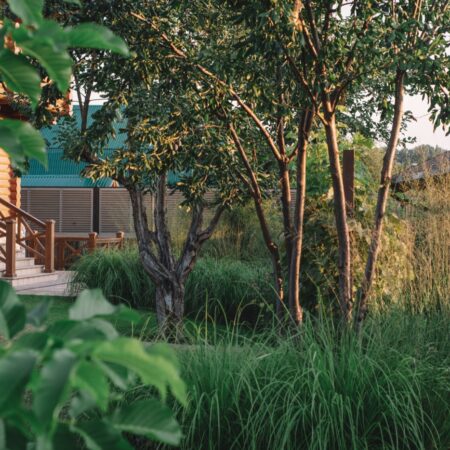 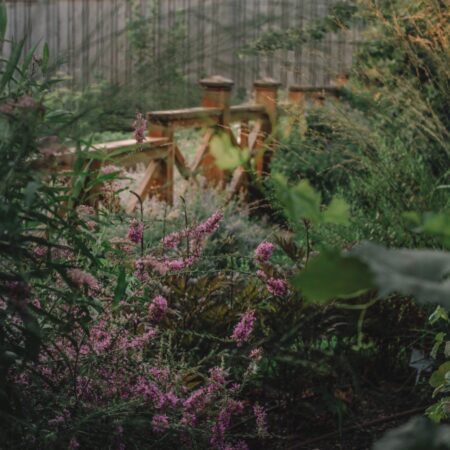 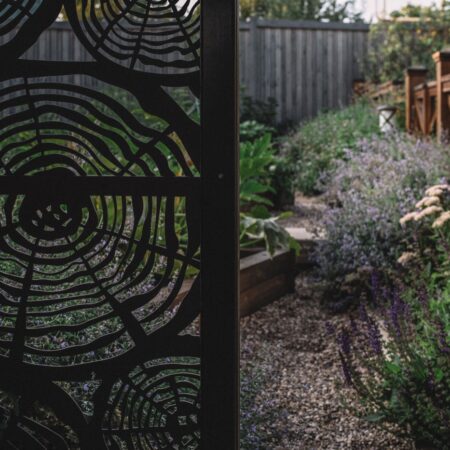 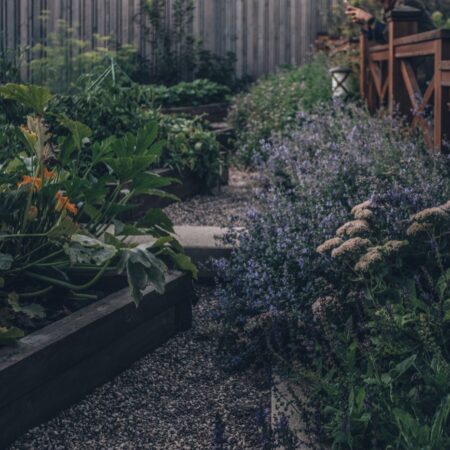 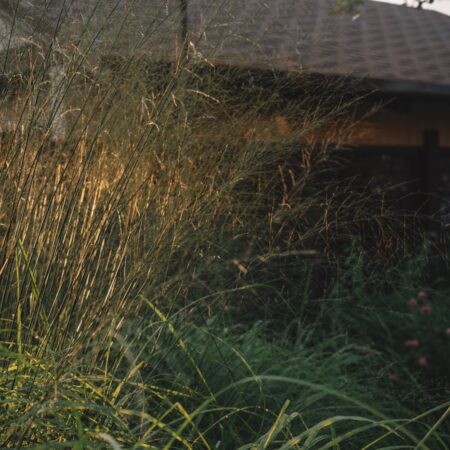 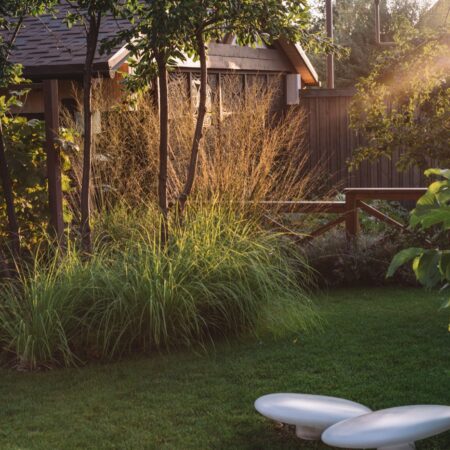 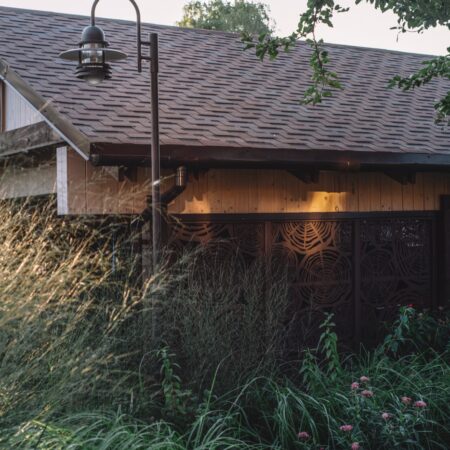 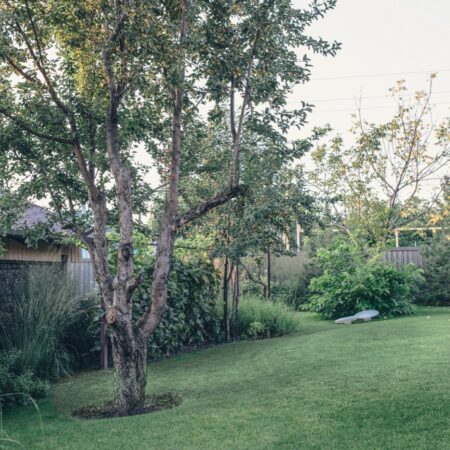 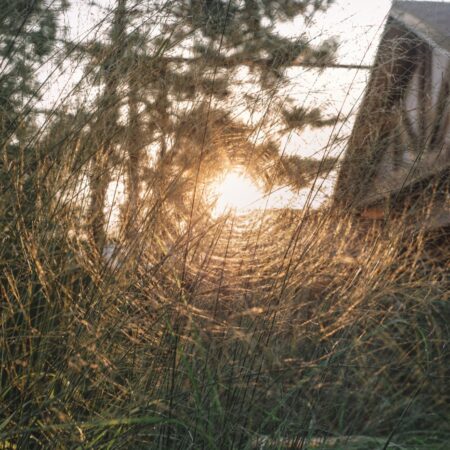 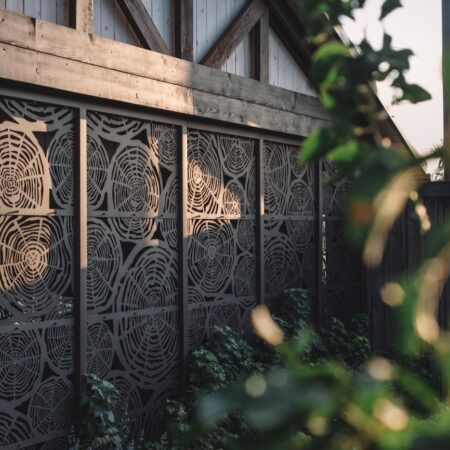 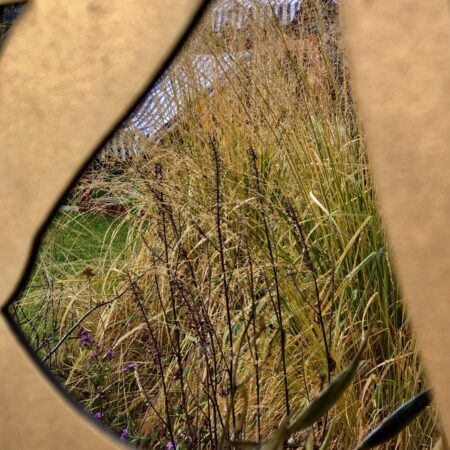 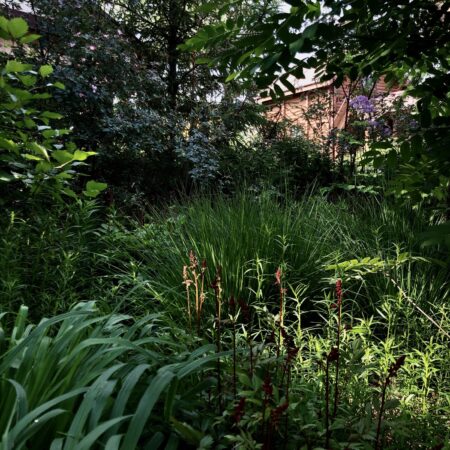 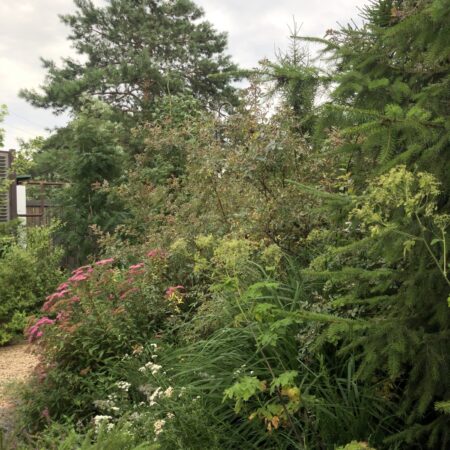 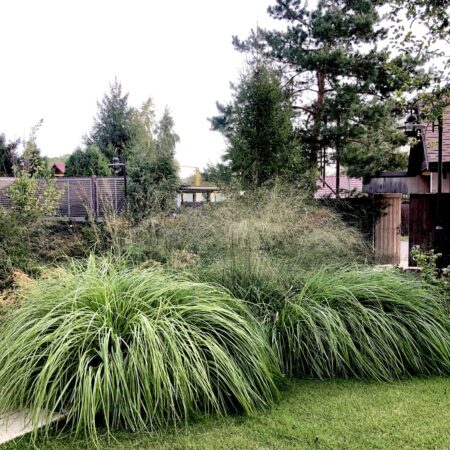 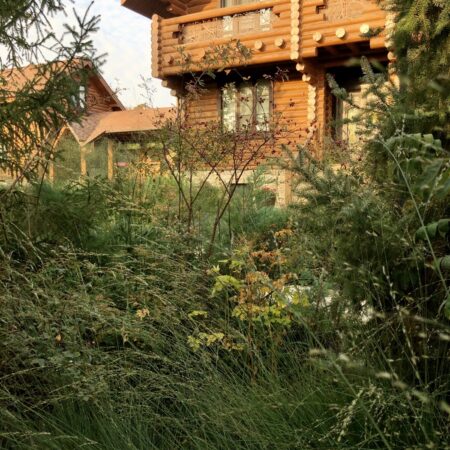 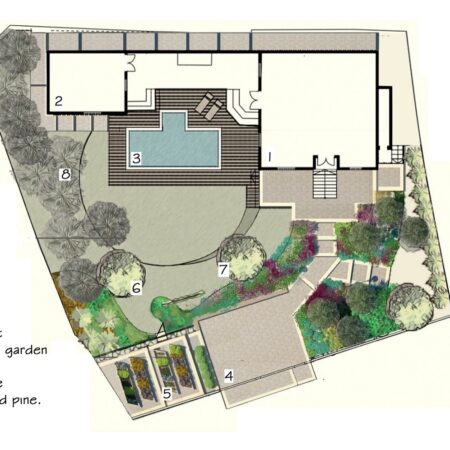 The level change problem was majorly solved by using slopes, avoiding the supporting walls construction. The biggest part of the land, that remained unoccupied after construction works, was taken by the lawn and surrounding planting, including picea abies, pinus nigra and pínus strobus.

Paving made of concrete tiles leads from the parking place to the house and to the vegetable garden. The remaining territory is open for free use, it includes the decking around the swimming pool, the lawn and gravel envelope in the lowest northern part of the garden.

Parking fence is made of sheet metal decorated with laser cut saw cuts with growth rings. It is very interesting to observe the sunlit garden through them, while being under the parking shed.

The house was dominating over the territory, so the plot seemed much smaller than it actually was. To soften this feeling, we decided to emphasize the house height by planting picea abies and picea omorika. Picea abies and picea omorika in front of it, alongside the path leading from the parking space to the porch. We formed several identical groups consisting of juniperus sabina, spiraea bumalda, rosa glauca, sedum spectabile, nepeta faassenii, and salvia nemorosa near the spruces and under them. These groups look decorative and ornamental throughout the year starting from early spring. Perennial flowers and grasses were planted in spaces between the groups, based on the light amount on the territory. Thus, to the left from the paving we planted groups of pennisetum and molinia, so that sun could shine nicely through their stems. We planted ligularia dentata and thalictrum aquilegifolium in the shadow along the fence on the right. Pennisetum and molinia were also planted in the other parts of the garden. It was very interesting to observe how the garden space changed throughout the year, when the grasses grew, started blossoming, and the sun shone through them.

The most unusual plant in this project was thalictrum aquilegifolium. It was planted because of its similarity with a fairy-tale or cartoon flower.

Within the framework of the project we wanted to plant Thalictrum delavayi, but there was a mistake and somebody changed labels on the plants and we got thalictrum aquilegifolium instead. We never regretted it! Starting from early summer right until first snow the plant looks remarkably well, it always changes but never looks uninteresting. We were also fascinated by the beauty of sneezewort (Achillea ptarmica), it quickly spread and occupied free space between other plants, its white stars highlight the lower garden area and look interesting even when it stops blossoming.

We do not cut any plants that stop blossoming before springtime, with exception of sage and spiraea. They are cut after the first blossoming, so that they could continue blossoming until late autumn.

As decorative plants quickly filled free space, we did not have any problems with weeds removal.  Garden care was limited to examining plants for the presence of illnesses, pests and timely disposal of them.

The most amazing thing was that the plants had miraculously agreed to do magic, because when they were planted, they did not have that cold, light-blue and grayish-colored shade of colour, which they have now and which creates the mystical image.

All engineering works, paving and planting were performed by manufacturing group “COSMOS”.