After its completion in 1897, the synagogue rapidly developed into a centre of religious and cultural life in the university town. This development was abruptly brought to a close with the destruction of the building by the NS regime during the Reichspogromnacht (night of broken glass). The ruins, which had been razed to the ground, were covered with soil and refashioned as a green area; since then there has been, in a prominent place, an unmistakable break in the city grid. 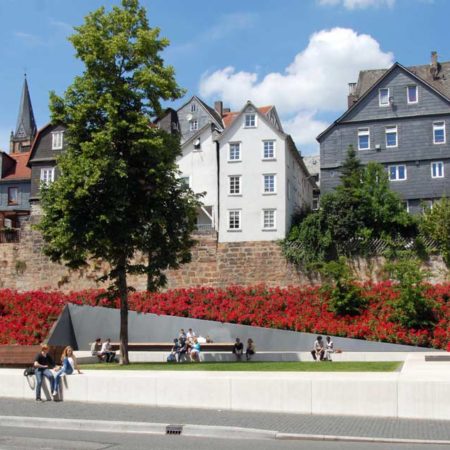 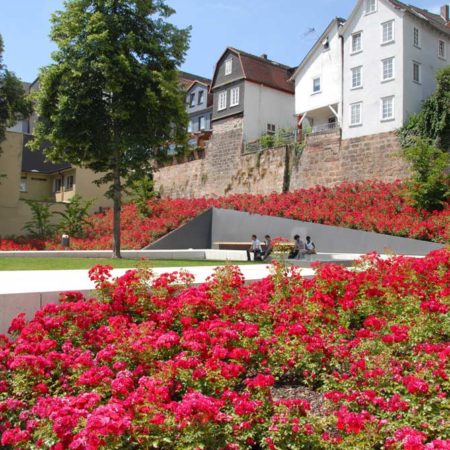 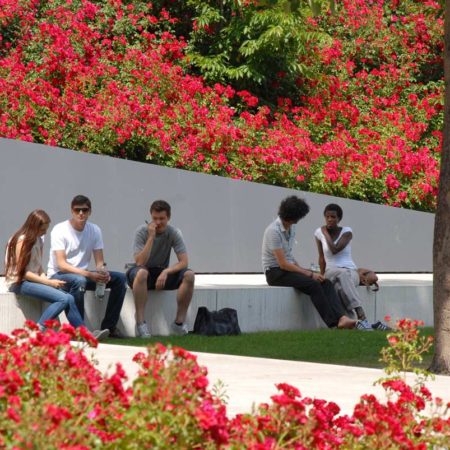 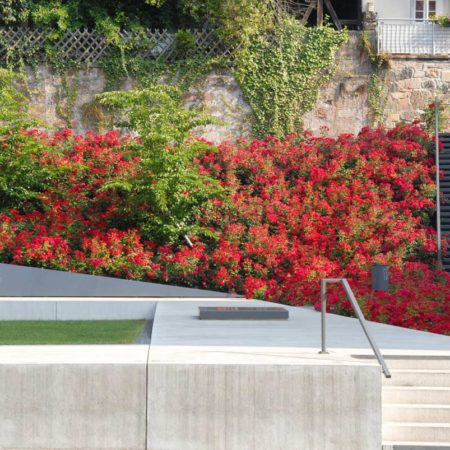 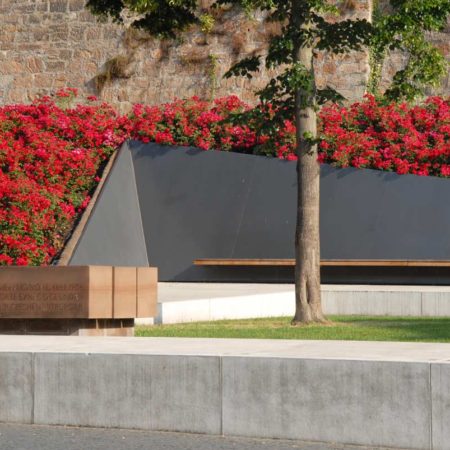 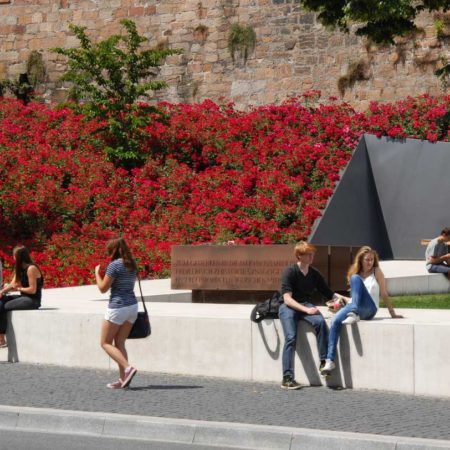 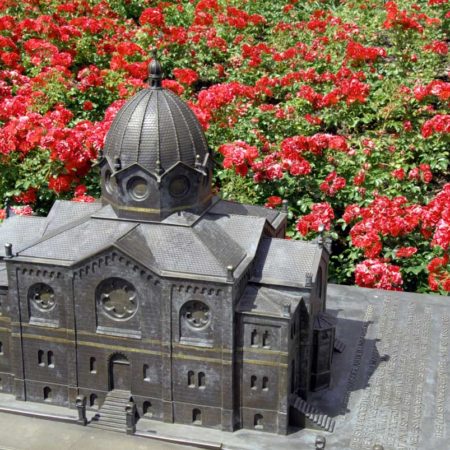 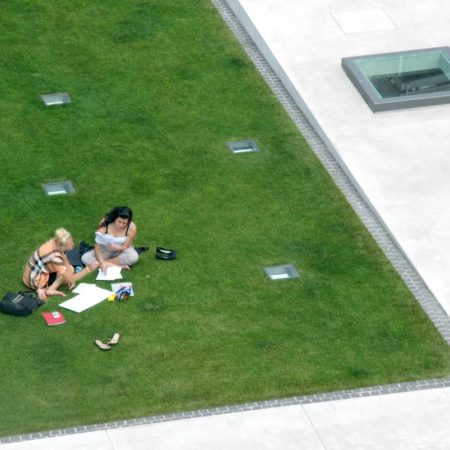 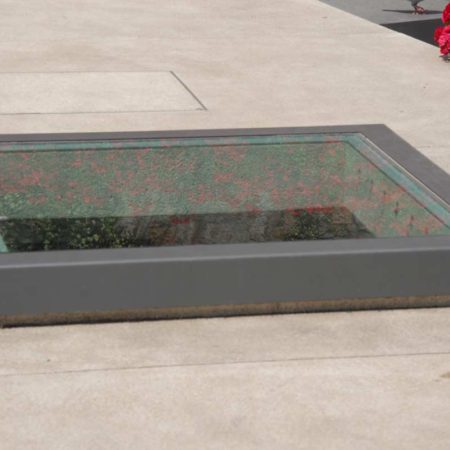 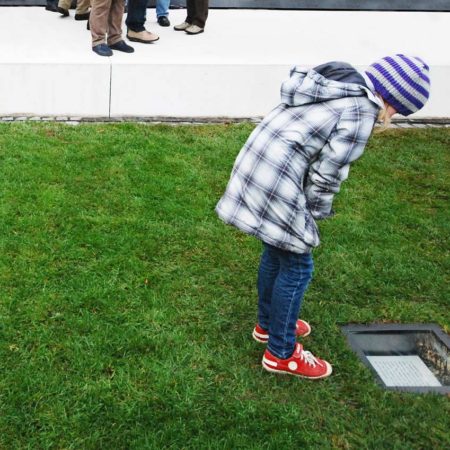 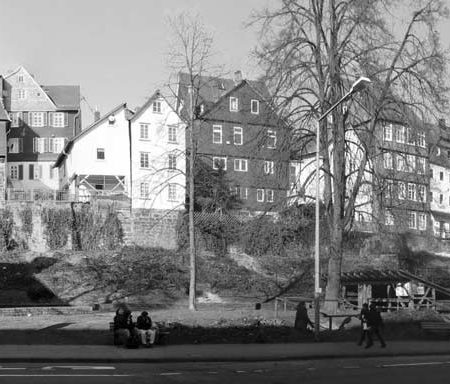 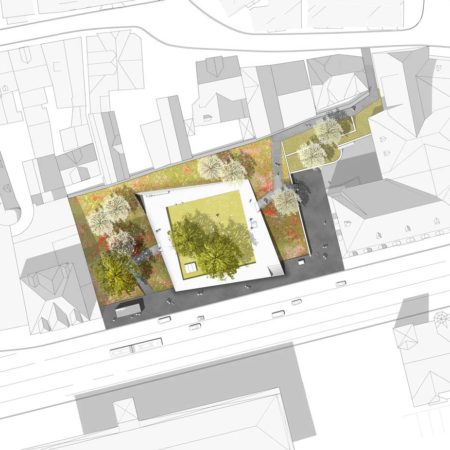 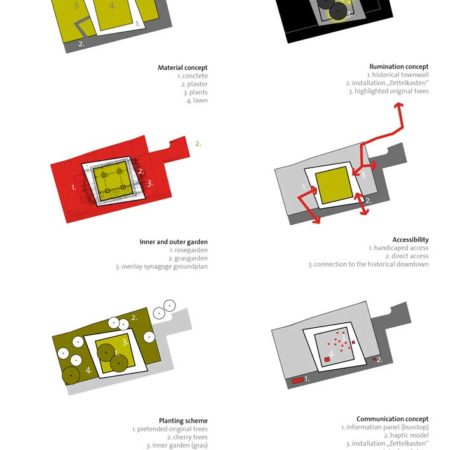 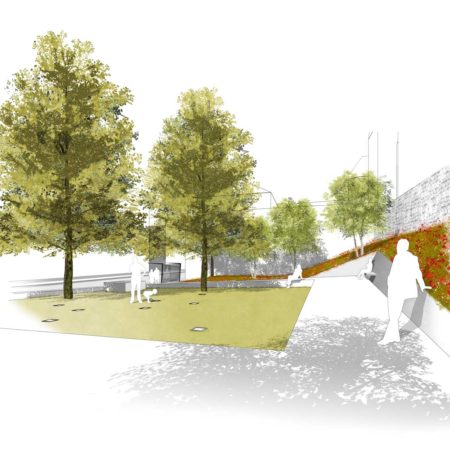 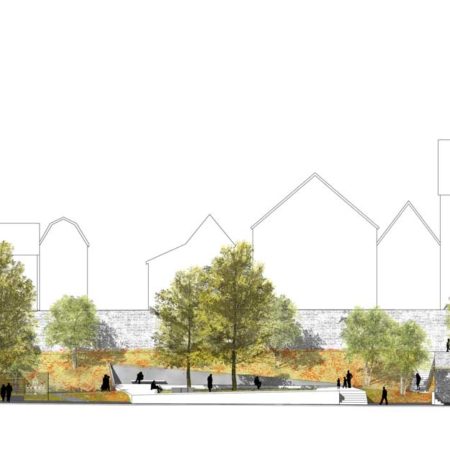 The concept interprets the memorial site as a public garden – a “garden of remembrance“. Its aim is to create a place charged with meaning and emotion, a site shedding its former casual countenance and, rather than shunning the public eye, firmly implanting itself in the cityscape, providing a marker which cannot be overlooked in its concrete-faced, speed-charged surroundings.

Any visitor ambling along the Universitätsstraße will suddenly find the sidewalk widening into an elongated square covered with a dark basalt surface. The glass walls of a neighbouring bus stop display a photograph of the former synagogue, providing a first clue to the historical significance of this area. The forecourt is bordered by a green area covered with rosebushes – in ancient Jerusalem, the rose was the only flower permitted to be grown within the city walls. The center of the area is marked by a sculptural frame made from white concrete which, gallery-like, encloses a lawn and a tree. Its exterior is formed like a parallelogram; its interior, however, takes the form of a quadrangle demarcating the former assembly hall of the synagogue. Narrow steps lead onto the platform and towards a glass panel embedded in the ground which affords a glimpse of the relics of the former synagogue: directly underneath the glass panel one can discern the well-preserved remains of the recently-excavated mikveh. Beyond this spot one sees a square lawn, slightly recessed from its surroundings, which forms the center of the site; an old lime tree provides spacious cover – a spot which radiates tranquillity. In the grass growing at the foot of the tree the memorial stone erected in 1963 is found. Otherwise the site is bare – almost bare, that is, as there are glass cases embedded in the lawn, containing slips of paper printed with large, unadorned letters. The visitor can sit down on the step bordering the lawn, and begin to read the inscriptions.

Art project
The artistic project called “Zettelkasten” brings about a continuous dialogue which is part of the everyday life of the community and will remain as constant activity through the years to come. People are invited to communicate their views and experiences linked to this iconic place; the “Zettelkasten” will be constantly renewed with quotations for the experience of all visitors.

The “Zettelkasten” consists of ten glass cases which contain several quotations, while embedded in the ground at the spot where the synagogue’s prayer room used to be. The project started out with quotations from interviews conducted with surviving former members of the Jewish community of Marburg and their children. The dialogue thus begun will be continued in the years to come. Other people will communicate their views and experiences linked to this place, and the “Zettelkasten” will then continuously be filled with more quotations from new interviews.

The project is supported by a bilingual internet platform that serves as a link between the community and the site; where not only information about the place is found, but also the current activities that are taking place. (www.garten-des-gedenkens.de)