G&C Arquitectos is a practice of architectural, landscape and urban design founded in 1997 by Marta González Cavia, Martin González Cavia and Jorge Cabrera Bartolomé. Since its beginnings, we focused our activity on architectural competitions, which allowed us to develop projects of a singular character. During these years we have developed an expertise in landscape design; equipment and corporate architecture, both new build and refurbishments; residential buildings and urban planning. Some of our projects have been featured in Spanish and international journals.

All the members of G&C are committed to excellence in professional practice and with the highest standards of design, sustainability and adequacy to the client´s needs. Since its beginnings we have been committed to following the principles of sustainable design and energy efficiency in our projects, which has earned us the Ecodesign Management System in accordance to UNE-EN ISO 14006 regulation.

Recently, G&C arquitectos has embarked in an exciting process of international expansion, for which it has opened an office in Lima (Perú) and it regularly takes part in international competitions, having won several international awards recently.

Each of our project is, for us, an opportunity to improve the lives of the people. Designing the landscape, the streets, parks and other spaces where some people will develop their lives is for us an exciting challenge and a call of responsibility. It is our dream that our designs will contribute to make a better humanity. That is why we approach each of our commissions with a deep analysis of the human and physical circumstances of the project. All that, together with the needs of our client is transformed into a feasible design. Each project is the result of the convergence of many unique circumstances.

Our aim is to give to our client more than he asked for, our dream is to help to build the spaces for a happier future. 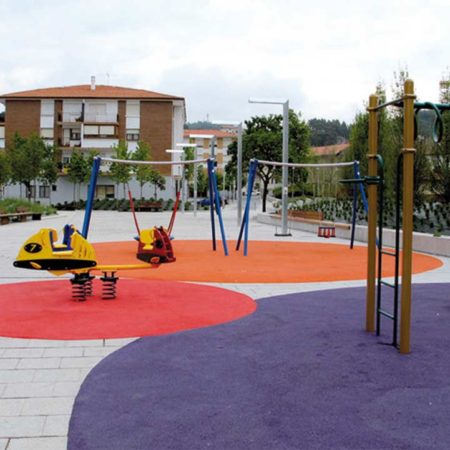 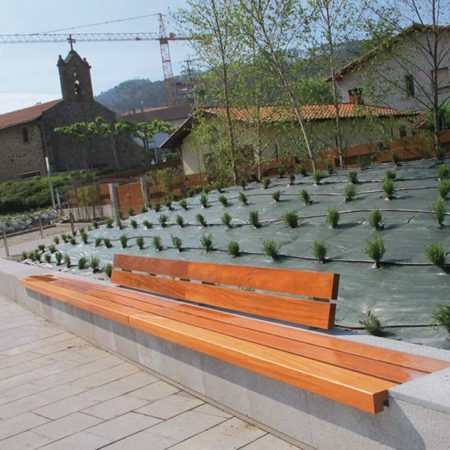 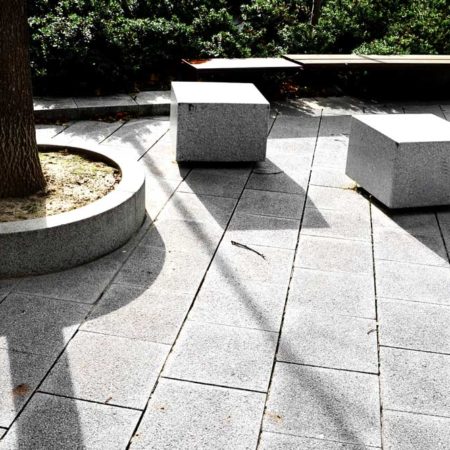 The objective of the intervention was to give the town of Lemoiz a public space where they could hold outdoor activities such as festivals and exhibitions that would add to their appeal as a tourist destination. The idea was to create an innovative town square which was open to the sea, well-defined architecturally, and that was capable of unifying its surroundings while also making them more attractive and dynamic.The plan proposes an outdoor space surrounded by vegetation. The focal point of the design is a garden bench that meanders through to create a fluid, yet cozy space that con nects the church to the harbor. Both trees and bushes enclose the area, making it a protected, integrated zone that visitors can enjoy at any time. A cobblestone “carpet,” highlighted by a line of lamp posts leads to a playground that is surrounded by benches along the perimeter. The village church is incorporated into the new space by a green slope that visually connects both spaces, restoring the original role of the chapel as the main construction of the square. 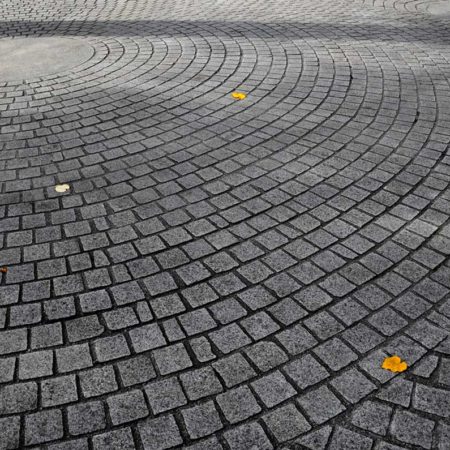 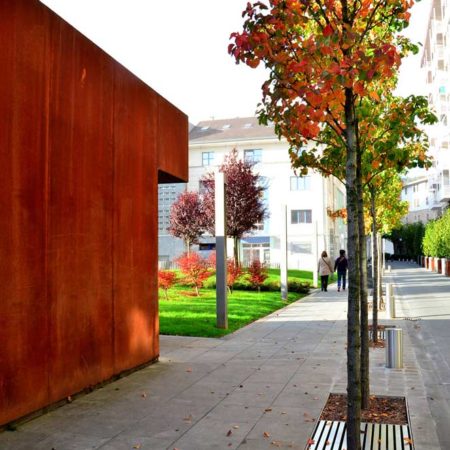 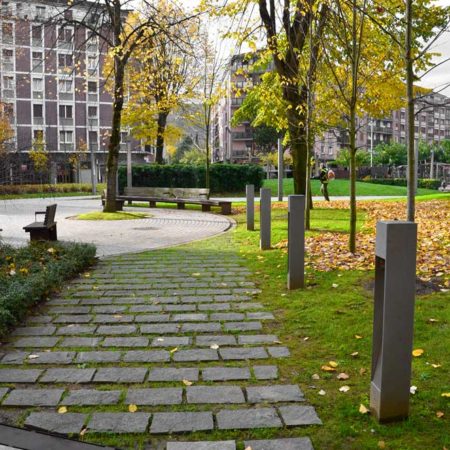 A green mass that spreads through the streets of the city. The Zelaieta park as green center of the city growing through the new pedestrian streets of the surroundings, crea ting new urban spaces more friendly spaces, where the human scale and the nature is priorized instead of the cars and the rough spaces. The recovery of the pedestrian role against the uncontrolled invasion of the traffic in the city, allows the creation of polyvalent spaces with lots of uses. The design looks for a great amount of possibilities and activities that can supply all the changing requirements of the users at the different moments of the day. From kid playgrounds, exhibitions, concerts, popular markets, and other social activities. The different spaces of the park allow the people to enjoy in their own way of the park, but getting connected and having a relation due to the space. Common spaces. 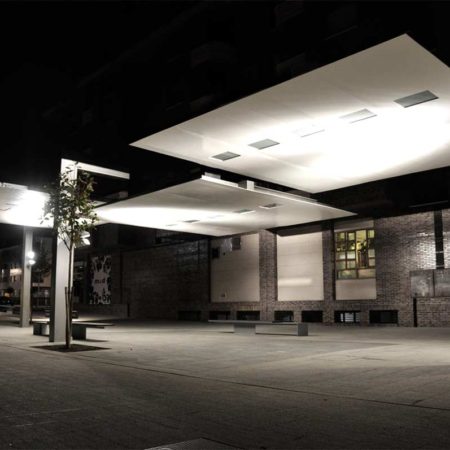 The steel awnings create an integrated urban sequence where vegetation blends with the outdoor furniture, creating an area sheltered from the rain. Several protected and shaded areas have been created in the whole area of development, thanks to the newly planted evergreen trees and canopies. The awnings have been made with steel and are structurally put together with 6x6m flat panels that hang from a horizontal beam that runs along the length of the space. They have been installed as a group of five and three steel awnings. The grouping of the panels allows the creation of enough space to hold a large gathering of people. The benches have been specifically designed according to the project. The steel awnings receive illumination from their supporting pilars, which act as reflectors by illuminating them from below, giving them a suspended effect. The new urban landscape is more integrated and aesthetically pleasing to the pedestrian. The walkway consists of two types of paving stone. Granite gravel covers the length of the street and the other acts as an ¨urban carpet¨, reflecting the steel awnings and supporting the outdoor furniture. The trees, Magnolia Grandiflora, are distributed in tree grids of different sizes in free form and asystematically. The group of canopies, with its accentuated sculptural character, creates a cozy ambience and there are numerous possibilities as to what the freedom of space can be used for. 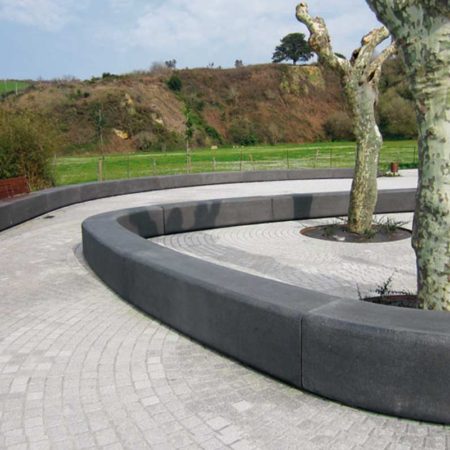 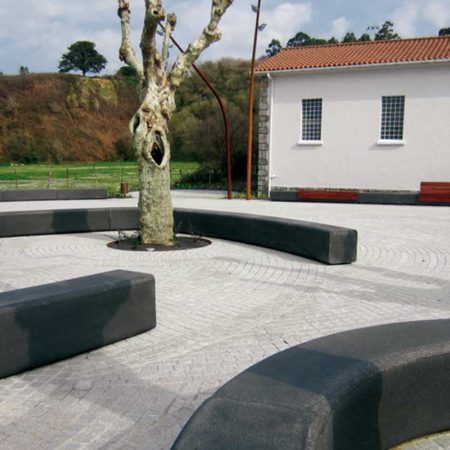 The aim of this project was to recuperate some degraded spaces around an old church and to transform them into a new green area and public space. This was done maintaining the identity of the place, which is rooted in its traditional mining industry. That explains the materials which were chosen: grey granite slabs for the pavement and steel for the banisters and other elements. The area around the church was pedestrianized and new circular benches were introduced under the existing London planes, creating new spaces of relation. The granite cobbles used for the paving were also laid in circular patterns, reflecting the dominant geometry of the benches, framing the trees and producing an encircling atmosphere. The old church recuperates its relation with its closest surrounding by a new pedestrian ramp. In the existing park new deciduous trees are planted, in order to create shaded areas and to hide the surrounding roads. Near the church various species of grasses, of easy maintenance and rich colours are planted. 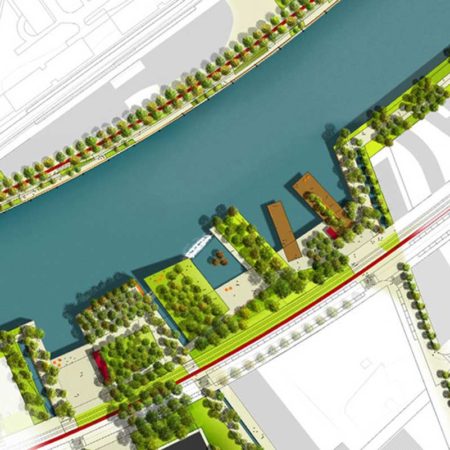 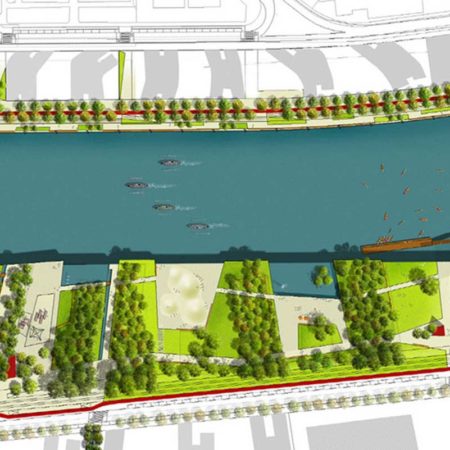 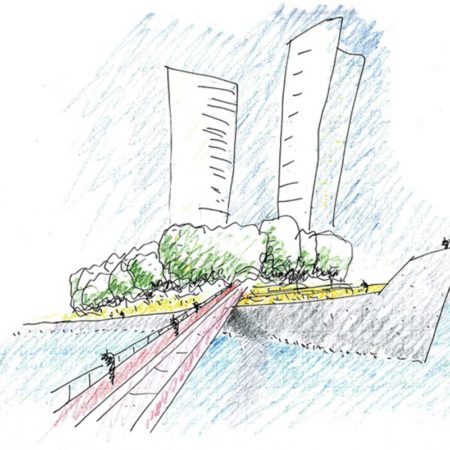 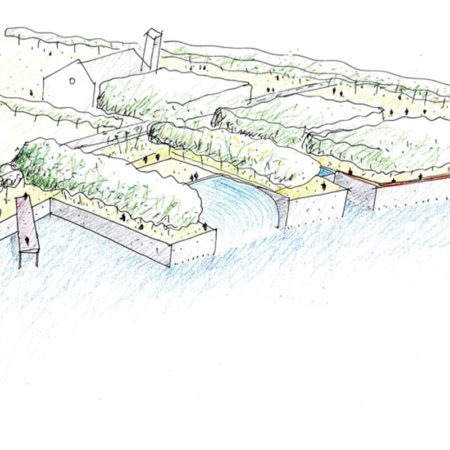 The commission in this case involved the design of the green areas of Zorrotzaurre and the riverbank of San Ignacio. This area has recently been object of an urban renewal plan that changed its main use from industrial to residential. Our proposal, fruit of the analysis of the place and its history came first in the design competition. The leitmotif for all the project was the presence of the water, which links all the spaces. Together with this, another strong idea of the project was to make evident the different character between the riverbanks of San Ignacio and Zorrozaurre, given that historically they had different characteristics and hosted different activities. The east riverbank, that in San Ignacio, is mainly preserved in its original form. The river border is maintained in its presentgeometry while some old industrial elements, such as pits, cranes and old concrete slab are also preserved. In the west riverbank, the waterfront is broken, allowing some piers into the river and some channels, as water fingers, crossing the island. The water enters into the park, and the old linear waterfront is broken to produce richer relations with the water and a more ludicrous environment. New hubs of activity are also created in order to configure the identity of the new residential areas. Regarding the sustainability, especial care has been taken in the management of rainwater. It will be collected, naturally filtered and stored to be used for irrigation on the green areas. Sustainability and creating a new identity fir this renewed area are the two pivotal ideas for this project. 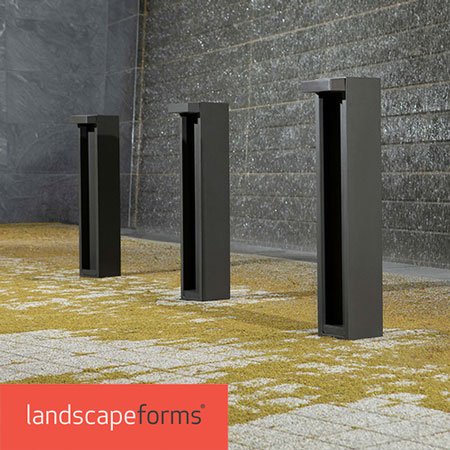