Upon detailed investigation of the existing waterfront edge conditions, it was found that a traditional seawall would be unfeasible, leading to concerns that a viable width for the parkland would be unachievable. The Landscape Architects worked with the engineering team to produce a new design based on a rock batter protected seawall under a two tiered pier supported promenade which projected back into the parkland to natural ground. A podium response for softscape planting over the space adjoining the waterfront path allowed for the original design of continuous flush edges between the parkland and promenade over water to be achieved. 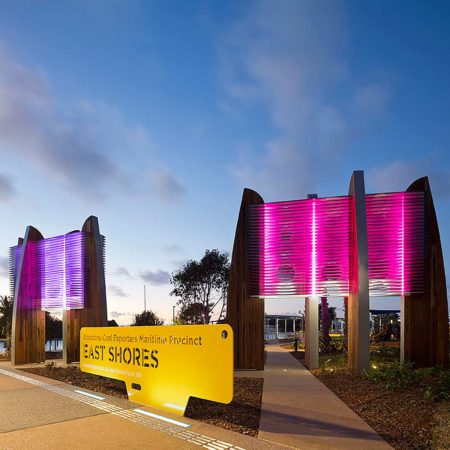 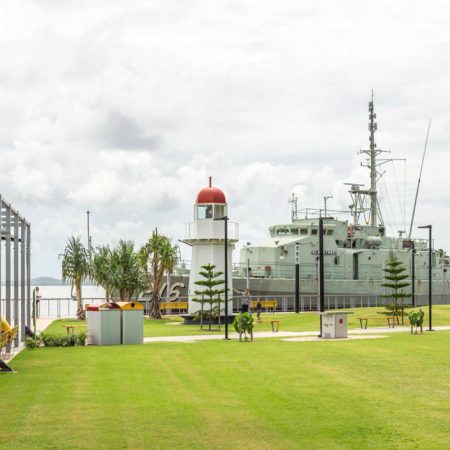 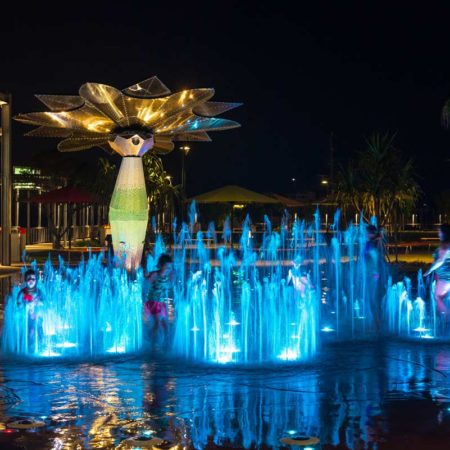 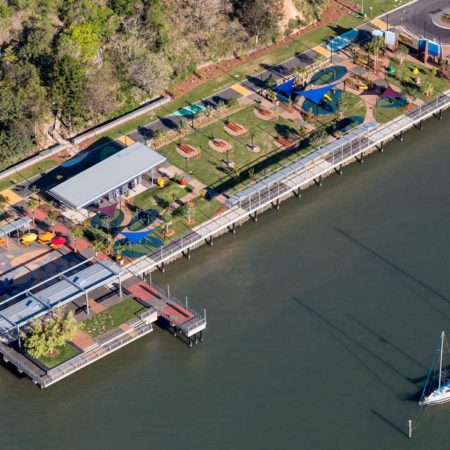 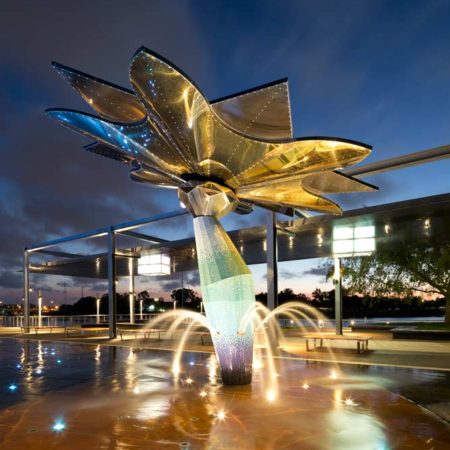 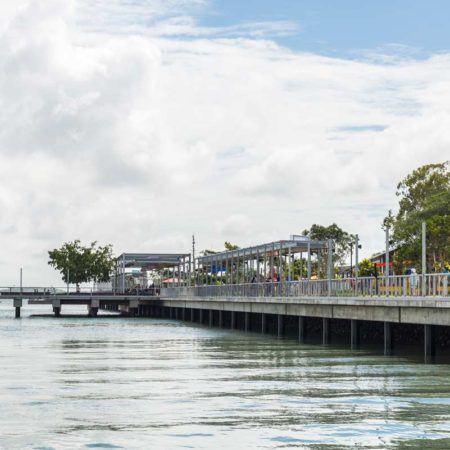 Levels for the parkland were set based on future sea level rise criteria, and allowance for existing large tide variations. Robust material selection was a focus for this vulnerable site, as demonstrated by the occurrence of a tropical cyclone within two months of opening. Little damage was experienced from this event, and the preceding high levels of public use.

Through the process of master planning and design the Ports Authority have a renewed and enhanced the process of community input. This parkland has and will provide into the future a focus for civic discussion and interaction, ensuring a lively social forum for Gladstone’s future.

The relocation of the HMAS Gladstone to the historic wet dock within the precinct, is a celebration of the nautical heritage of the city and is now a focal point around which community events and festivals can be staged. The provision of a wet dock for this ship has ensured that this local icon has a viable long term future. Access and maintenance of the ship previously was restricted, leading to increasing concern for the ships future. The team worked directly with local maritime heritage personnel to ensure this ship and the wide range of maritime artifacts were incorporated sensitively, with a focus to educate, and renew their public interaction.

Working with the team’s WSUD specialists, an innovative new approach has been trialled where site storm water is collected and transferred to a large scale underground wicking bed which provides energy free irrigation for the site’s large open space lawn area. Monitoring and testing of this system will provide valuable insights into large scale storm water retention and reuse. Final treatment standards for water leaving the site into the surrounding river and harbour were of the highest priority.

Gladstone previously had a lack of dedicated open space which provided a recognizable gathering place for the broader local community. The new parkland ensures that an easily accessible, high quality public realm is available 24 hrs a day. The commitment to provide a free community space catering to all ages and social background, with opportunities for play, exercise, rest and celebration were core principals of the design process. This has led to a resurgence of community interaction, discussion and civic pride.
The redevelopment of a degraded and dangerous site within the heart of the city, has allowed for a new level of national and international interest in the city and surrounding region. Tourist visitation and subsequent commercial benefit to the local community has increased in the short time the parkland has been opened, with a bright future predicted ahead.

The design of the parkland sought to draw upon the Urbis Master Plan goals of connectivity to the CBD, environmental improvement, celebration of the city’s history and culture and the creation of a regional and world class waterfront attraction. These principals guided the design, forming the basis for the unique Stage 1 outcomes including:
• Connection to the water’s edge through a 380m long waterfront promenade, sheltered by lightweight industrial inspired overhead canopies, and an over-water gathering and recreation space located adjacent to the sites dynamic and wildly popular waterplay experience
• An internal pedestrian and cycle promenade linking the parkland with the city centre pedestrian network, and adjacent Auckland Hill lookout. This promenade performs a dual role of occasional heavy lift access for the Ports facilities after hours, ensuring the Port’s Facilities connection has been maintained, while being transformed into a parkland design
• Collection and treatment of all site water through WSUD practices. Site storm water is collected and transferred to a first of its kind, large scale underground wicking bed system that provides energy free irrigation for the site’s large open space lawn area
• Gladstone’s role as one of Australia’s largest ports and maritime precincts has been celebrated through the incorporation of numerous historical elements throughout the parkland, and insertion of new elements such as maritime buoys floating over large expanses of grassed waves, site signage referencing deep see buoys, and HMAS Gladstone berthed permanently in a wet dock within the parkland, creating a vibrant and evocative series of spaces intrinsically linked to its past and surroundings
• Large scale public artworks celebrate the entry to the parkland and the playful waterplay zone. These elements draw upon maritime and ocean life forms to reinforce the site’s character and prominence.