The project covers the wider surroundings of the Grand Park Hotel in Rovinj, Croatia. It is part of a major overhaul of the town’s southern tourist area, where the construction of a new five-star hotel and marina was commissioned in 2016 by Maistra d.d., one of the leading hospitality groups in Croatia. The public area, the scope of this project, previously a wooded hill with decaying trees, needed to be refurbished to serve as a pedestrian route to the hotel’s main entrance, as well as a connection between the town’s historical centre and its main public park, Zlatni rt. The main challenge was to create a design that would respectfully coexist with the existing historical context and result in a new public area that offered a unique experience to its users. The design takes multiple perspectives into account – the interests of the local population in need of additional access from suburban neighbourhoods to the waterfront and the interests to revitalise the area as a tourist destination. Significant attention has been paid to the project’s overall visual impact as it faces the town’s historical centre. The result is a new public park characterised by an interplay of terraces traversed by two walking routes. Existing valuable trees, such as holm oaks and pines, have been preserved, while the overall greenery has been carefully thinned out to provide panoramic views of the surrounding landscape. 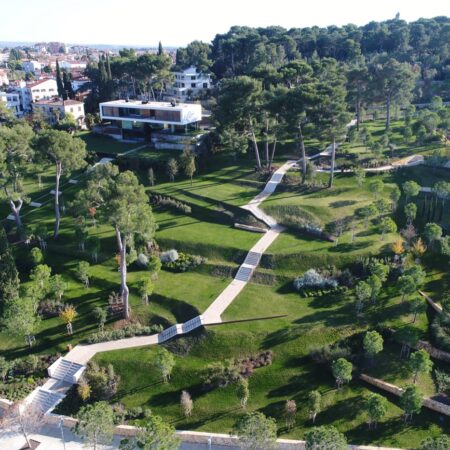 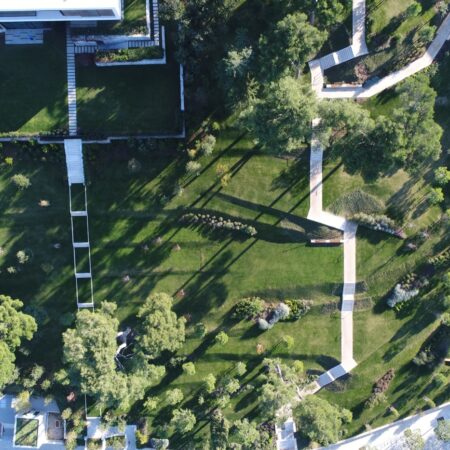 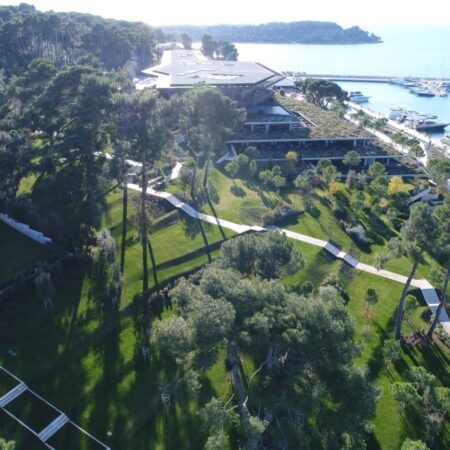 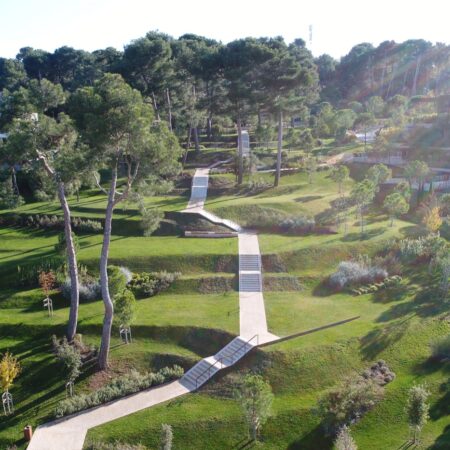 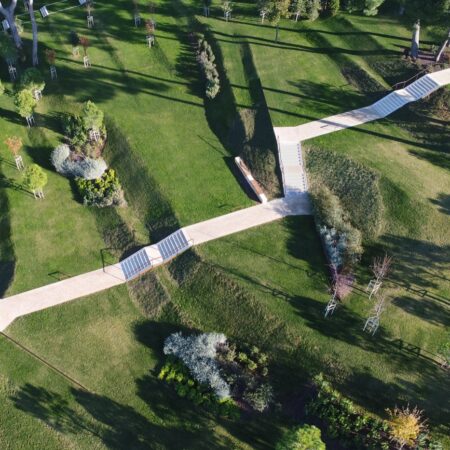 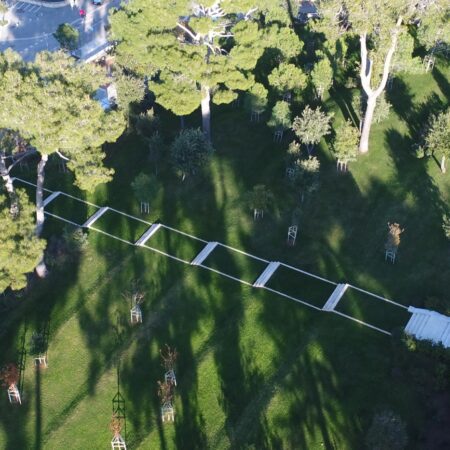 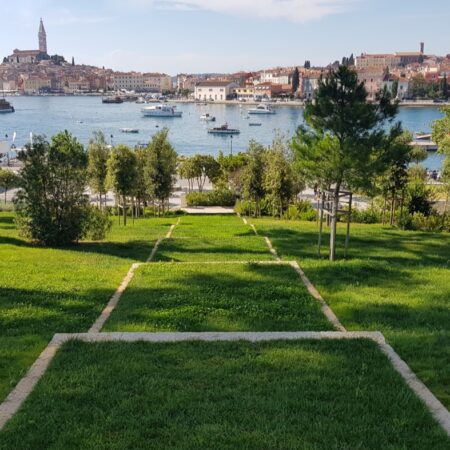 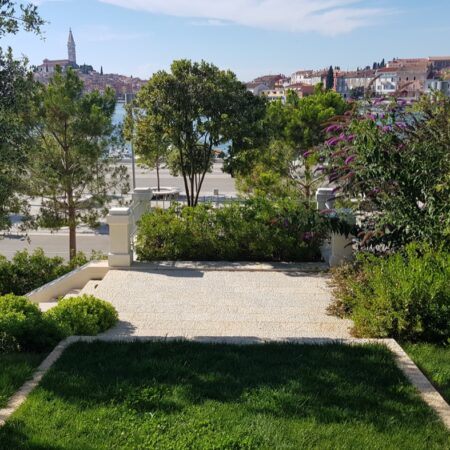 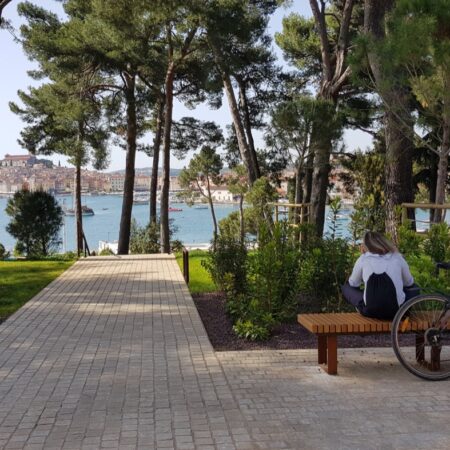 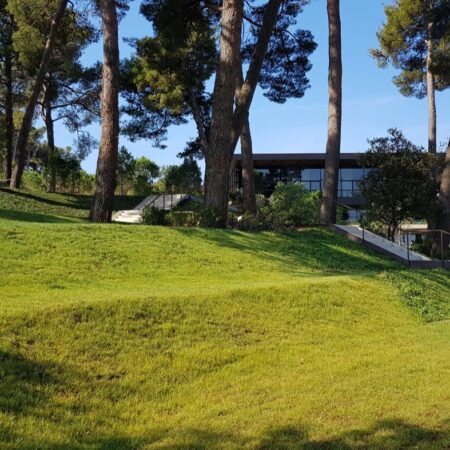 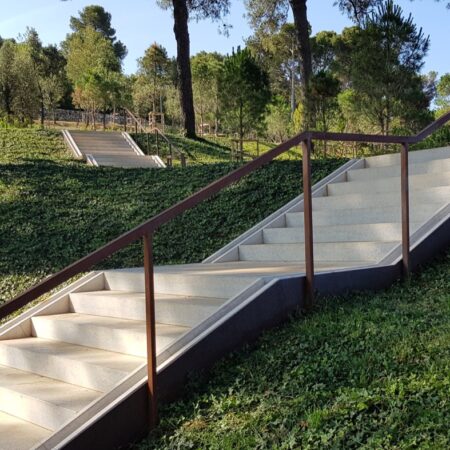 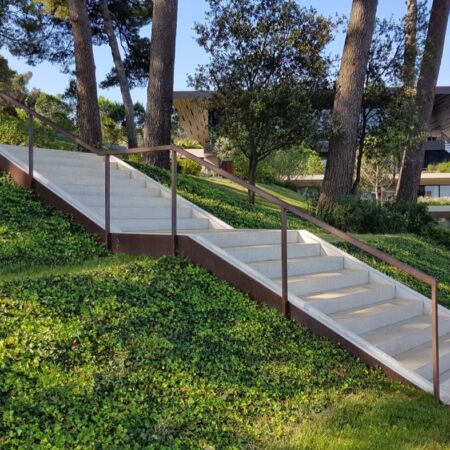 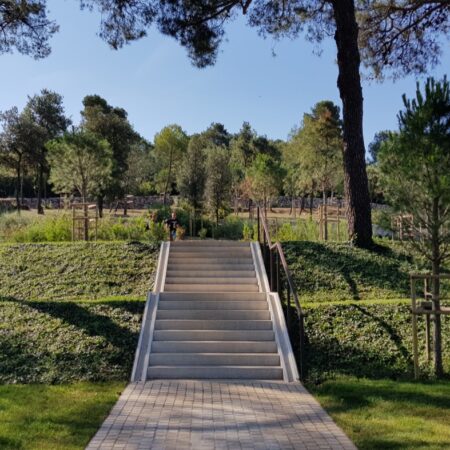 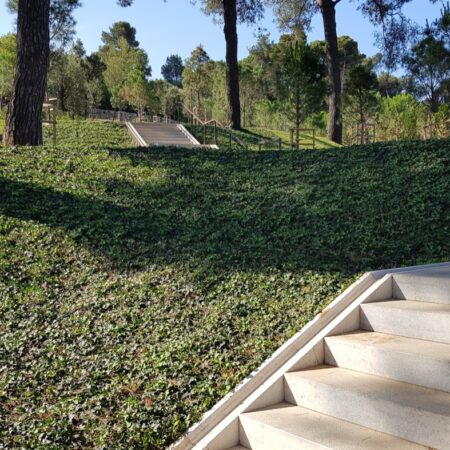 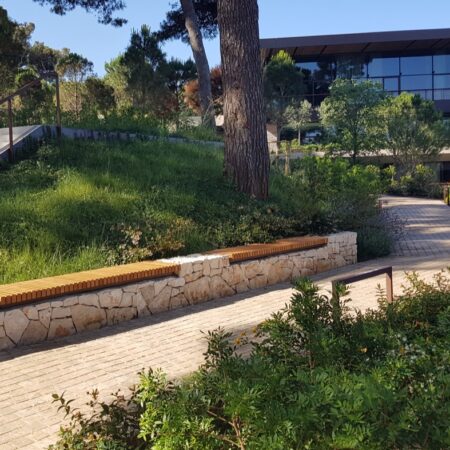 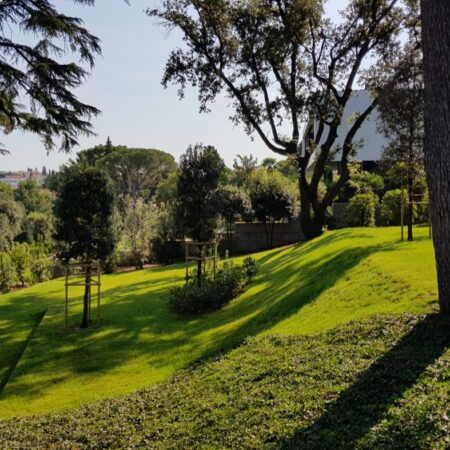 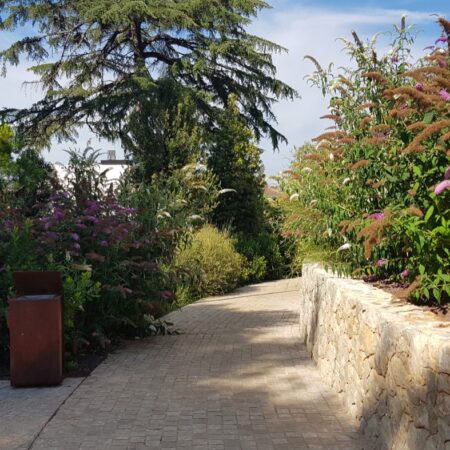 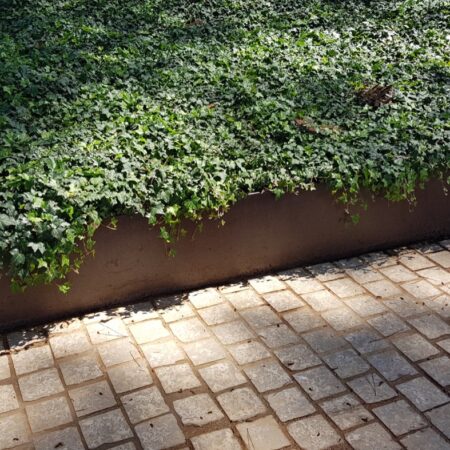 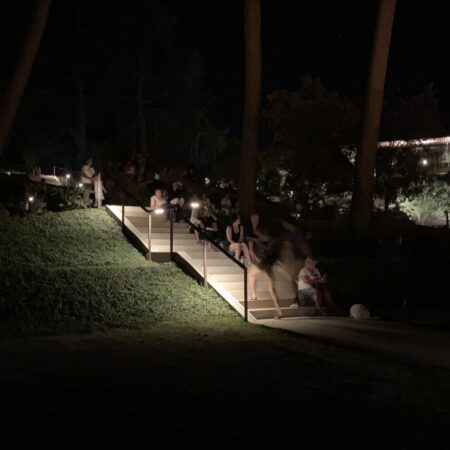 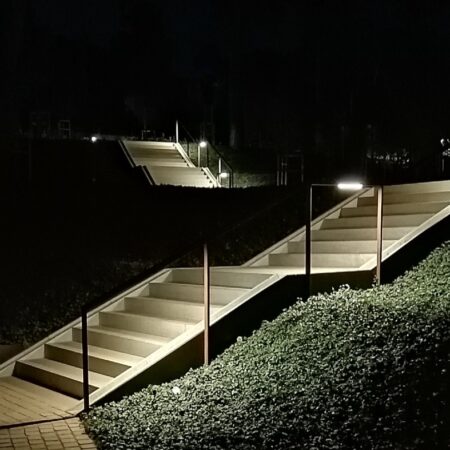 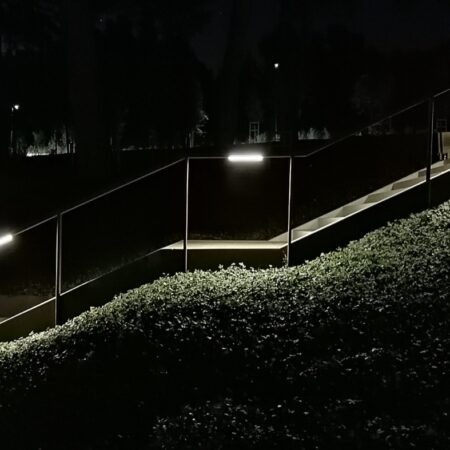 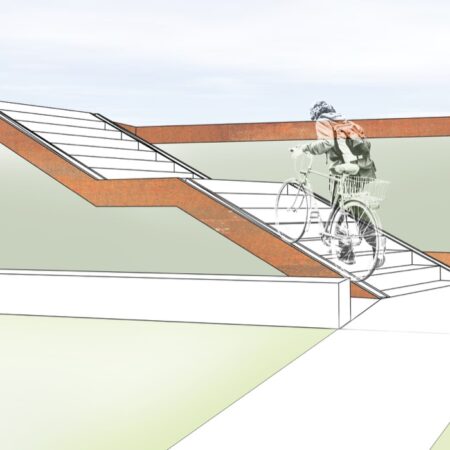 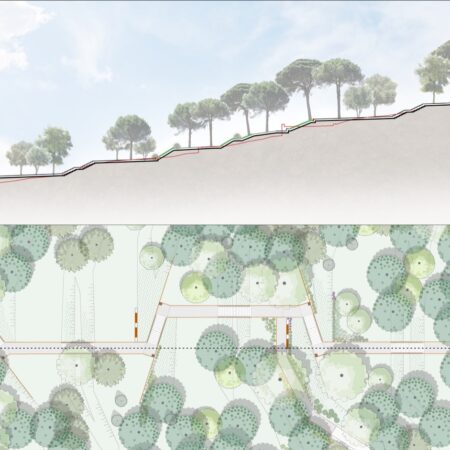 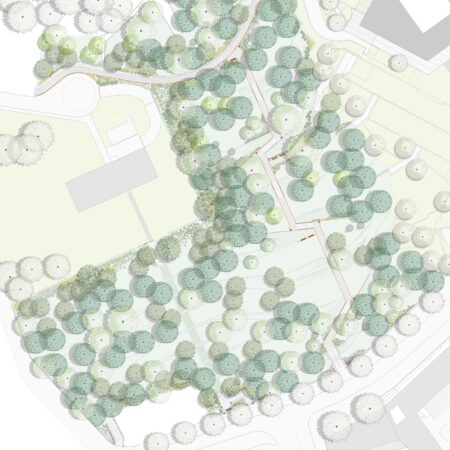 The terrain topography was modified to form terraces, permitting a public walking route that connects the town’s suburban neighbourhoods to the waterfront. The interplay between flat terraces and mild slopes allowed for the exclusion of retaining walls and other construction elements to minimize the project’s overall visual impact. Furthermore, the planned, built elements have been adapted to the existing infrastructure and were organized around preserved valuable existing trees.

The project comprises two pathways, a straight historical path that serves as access to a nearby villa and a new public walking route that cuts across the terraces. Both have been designed following a minimalistic approach emphasizing the interplay between geometric elements, contrasting lines, symmetrical and asymmetrical shapes, flat and sloped surfaces. The straight path has been reconstructed, preserving its historical structure, position, and materials. By contrast, the new walking route develops rhythmically over the terraced terrain. With its local white stone paving and COR-TEN steel edges and handrails that provide a stark contrast with the green vegetation, it offers a distinct aesthetic to the area. In addition, the new public route has been equipped with wheeling ramps to facilitate access for cyclists.

Prior to revitalisation, the area was covered by an overgrown pine, cypress, and holm oak forest. The conducted vegetation survey showed that 75 % of the vegetation was damaged or in bad condition. Thus, the landscaping aimed at preserving all the healthy trees, especially the valuable native Quercus ilex. A large number of young trees have been planted to rejuvenate the forest and restore the landscape.

Since the project area lies on a hill and is elevated a few meters above sea level, it offers stunning views of the port and city centre. Thoughtful positioning of the pathway and resting areas and careful thinning of the greenery have provided extraordinary panoramic views of the surrounding landscape. Since its opening, the area has been widely used as a viewing point for the annual summer fireworks festival.

Used by both residents and tourists equally throughout the day as well as during the evening and night hours, the park’s lighting had to be carefully designed too. All the lighting elements have been discreetly integrated into the designed elements along the walking route – linear floor lighting and handrail lights.

With its minimalistic design and low visual impact, lush greenery and facilitated access for pedestrians and cyclists, the project has met its main objective, which is to create a connecting public space both from a physical and a social perspective. The outcome is a unique landscape that stretches to the city centre and functions as a gateway to leisure areas, open to local residents and tourists alike.