When it opened in 2012, downtown Los Angeles’s Grand Park established an elevated standard of urban design quality that helped catalyze a revitalized downtown. The park serves both the growing neighborhood population and regional communities with flexible open space, botanical gardens, diverse programming and other amenities. Unifying significant historic, cultural and civic spaces, Grand Park declares itself “The Park for Everyone” by incorporating the rich cultural and horticultural traditions of LA’s diverse population into its fabric. This 12-acre “botanical bridge” links the Music Center with City Hall within a richly textured botanical setting. The park’s gift to the city is both real and aspirational. It is an everyday place of diversity and unity for both small groups and assemblies of thousands. It is a place for the collective imagination, where Angelenos can both witness and project their desires for a more inclusive and equitable city. 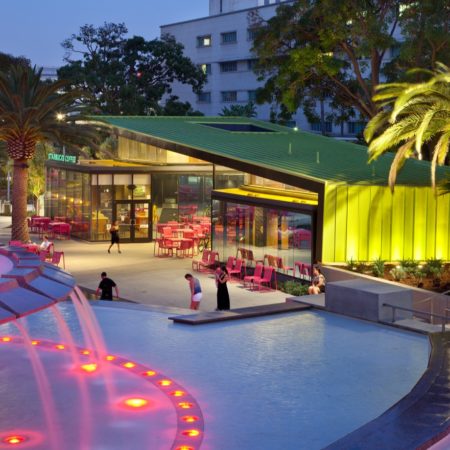 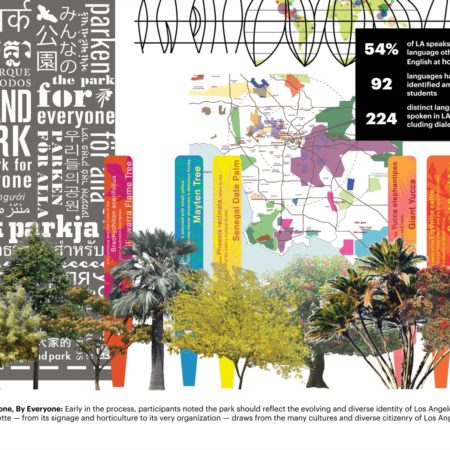 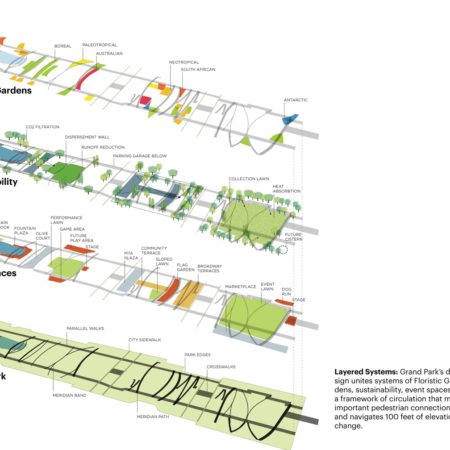 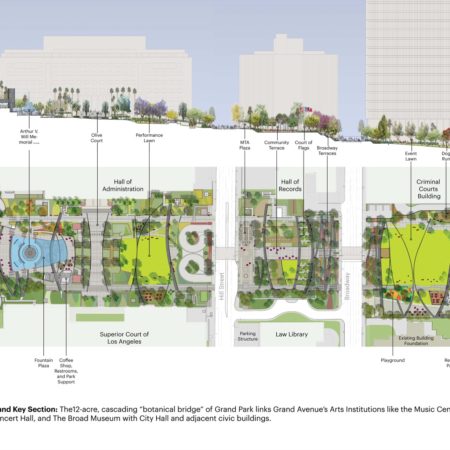 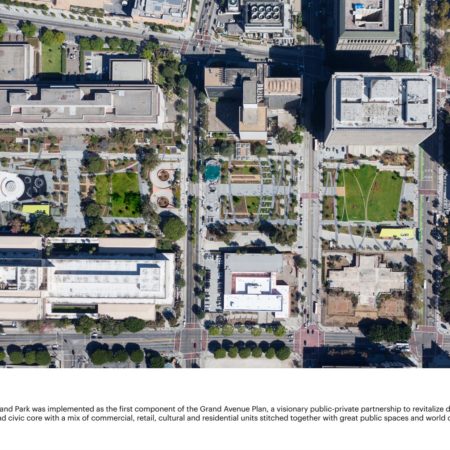 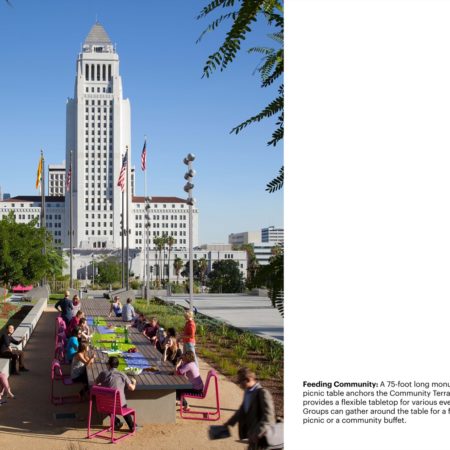 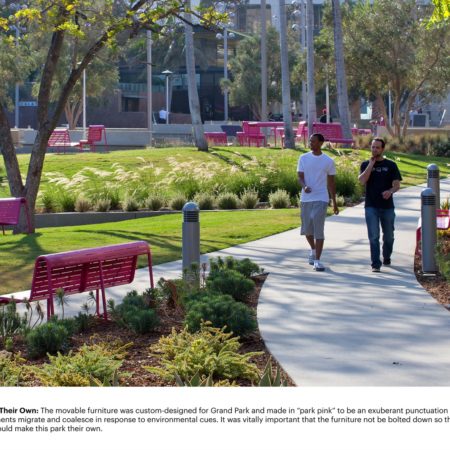 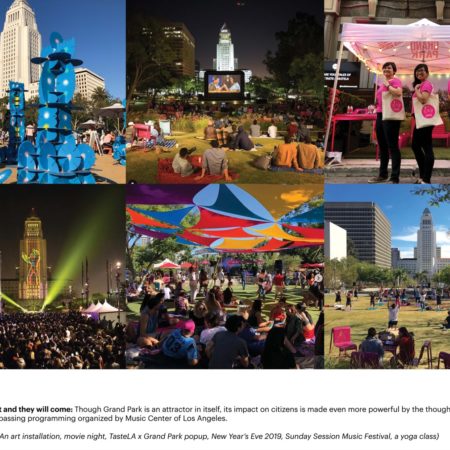 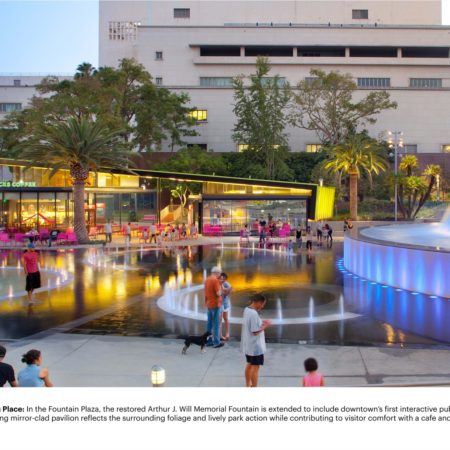 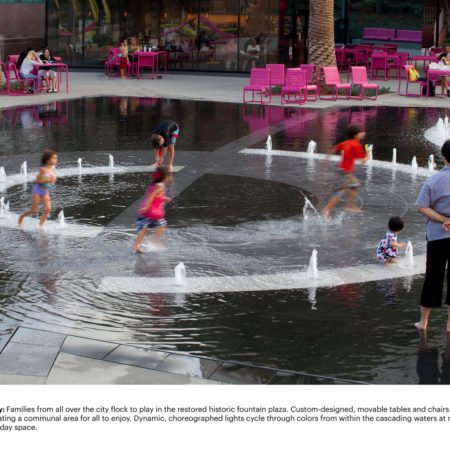 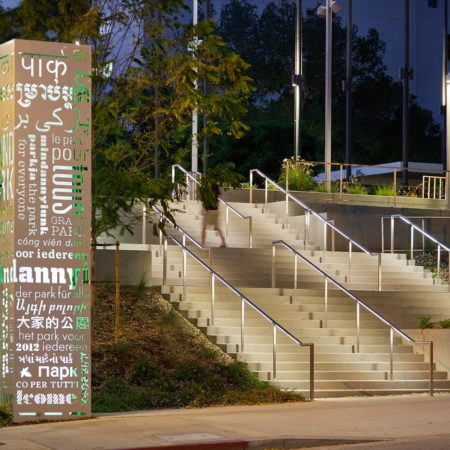 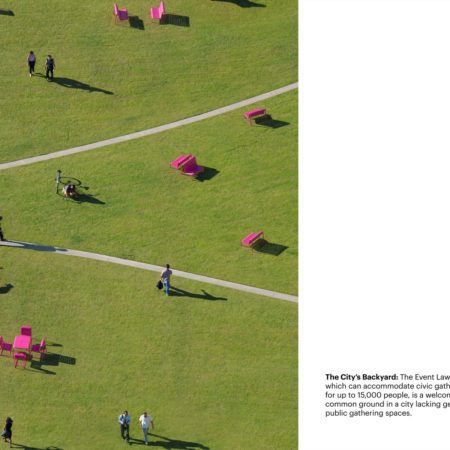 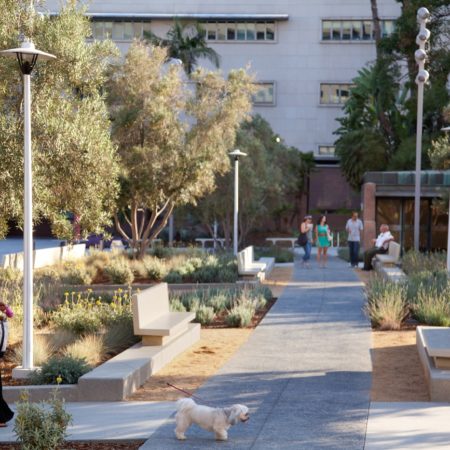 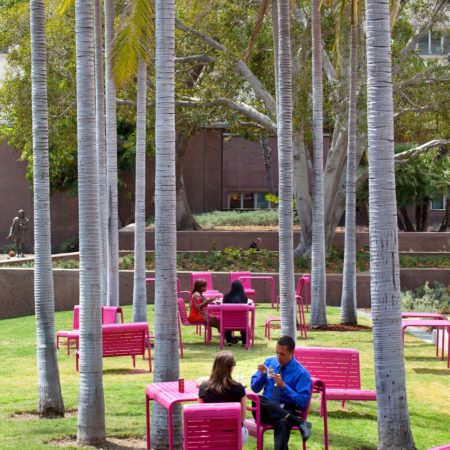 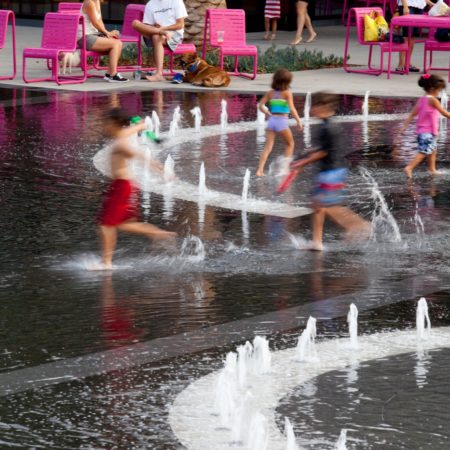 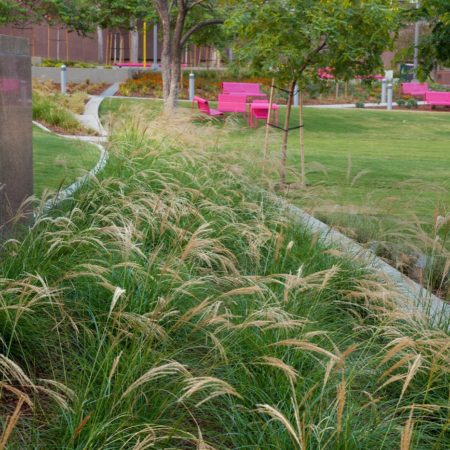 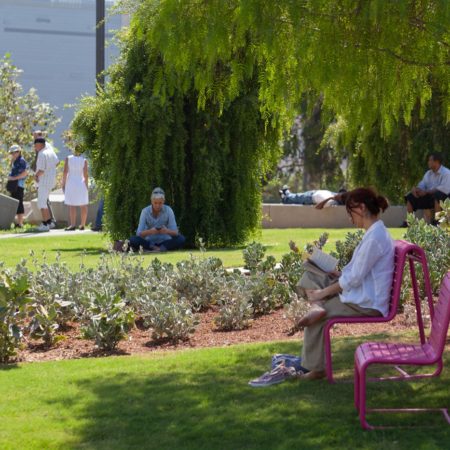 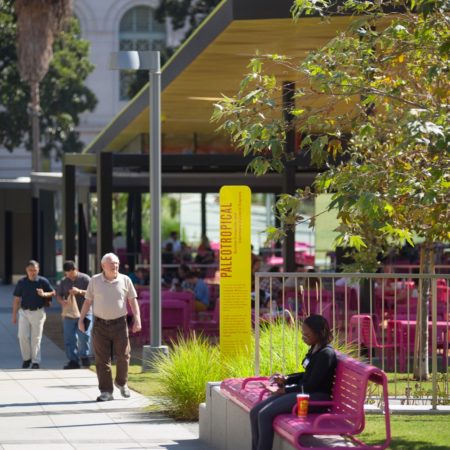 The original configuration of the blocks was based on City Beautiful principles and in the 1960s the site was redesigned as a civic mall. After falling into disuse, city planners saw the potential of a revitalized park to catalyze and reinvigorate the heart of downtown Los Angeles. Grand Park’s collaborative team of designers, planners, civic leaders, and developers imagined leveraging the site’s historic role as a civic center to allow the park to thrive in a denser, transit-focused future.

The park’s visual palette draws from the many cultures and diverse citizenry of the City of Los Angeles. Reflecting this goal of global inclusion, the diagram of the park adapts Goode’s Interrupted Homolosine Projection, a global mapping process. The mapping technique projects the globe onto a single two-dimensional map. Following Goode’s Projection, Grand Park features a diagram of linear east-west promenades bisected frequently by sweeping meridians. The meridians interpreted in paving, structural, and planting edges are more than simple graphics: they serve as flexible organizers for the park, creating a framework for nesting diverse programs and unifying and absorbing the more challenging technical, access, and service layers of the site. The meridian scheme unites four urban blocks and nearly 100 foot elevation change that comprise the park, including The Fountain Plaza, Community Terrace, and the Performance and Event Lawns.

The monumental Arthur J. Will Memorial Fountain activates the Fountain Plaza across from the Music Center. The restored and lighted fountain is enhanced with an interactive play fountain. Adjacent is a mirror-clad pavilion and coffee shop that draws visitors into the park interior to linger and relax. Fountain Plaza, and its extended wading fountain is a draw for families from throughout the city, confirming its status as a new public hub in downtown Los Angeles.

Just below is the Performance Lawn, the site of concerts, film screenings, and other events orchestrated by the neighboring Music Center. The even larger Event Lawn, which can accommodate civic gatherings for up to 15,000 people, is a welcoming square of common ground in a city lacking generous public gathering spaces and evening activities. These outdoor performance spaces set a new standard for the integration of media and technology in the city, literally and metaphorically “plugging into” the Music Center, the county entity that programs the park. A colorful playground and a dog run line these spaces, integrating daily services for downtown residents.
Grand Park elegantly straddles the many roles we expect from contemporary urban parks: to absorb large crowds in our reinvigorated downtown, yet provide a sense of intimacy and visual richness. Since its 2012 opening, Grand Park has become an urban sanctuary for Angelenos, a bucolic draw for families into the rapidly evolving urban core and park-poor surrounding areas as well as the site of important civic events in a politically charged era. During recent large public assemblies, such as the annual Women’s March, crowds gravitated to the park to raise their voices and find solidarity. As design critic Christopher Hawthorne wrote of the park in the Los Angeles Times on march day in 2017: “But really the view down the hill made the difference…it was a way to be in the march and above it at the same time. A crowd doesn’t feel whole unless it can get a glimpse —and a measure —of itself.”