Het Breed is a modernist neighbourhood defined by rational residential blocks, 5 stories with ‘streets in the sky’ in Amsterdam North designed by the architect Frans Van Gool in 1963. The landscape design, which succeeded Van Gool’s plan in 1969, was inspired by modernist principles and is characterised by an extensive grid of plane trees across the site. The neighbourhood includes a number of schools and secondary pedestrian routes linked by simple, scattered concrete play objects. In recent years the apartments have been renovated with new entrances and fenestration. Today the public space across Het Breed has become dominated by car parking and is in need of renewal, the asphalted central space with dilapidated tennis and basketball courts was a not welcoming and inviting for the majority of the residents anymore. There was even nowhere to sit as the benches and rubbish bins had been previously removed by the council to reduce antisocial behaviour. 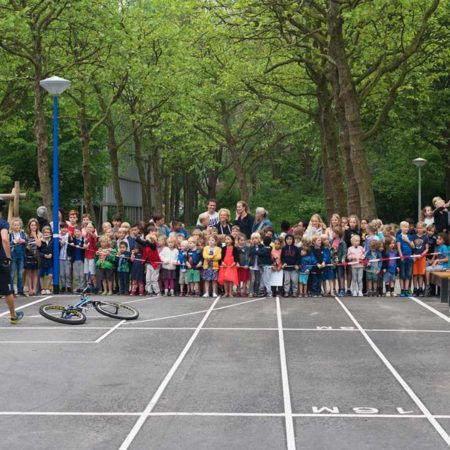 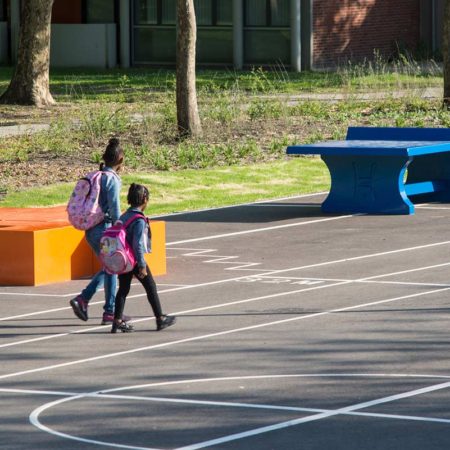 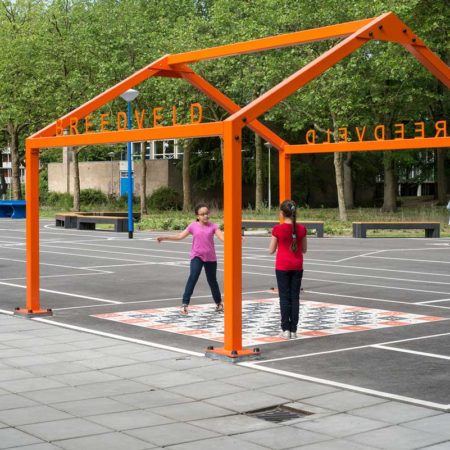 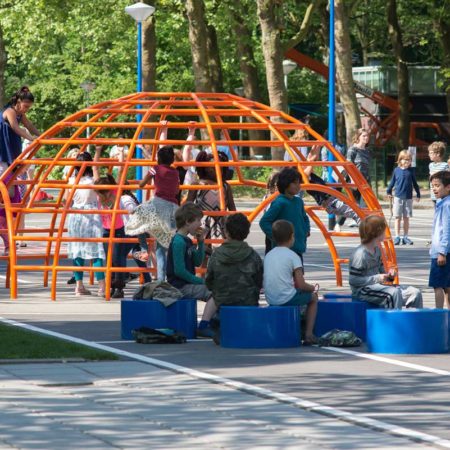 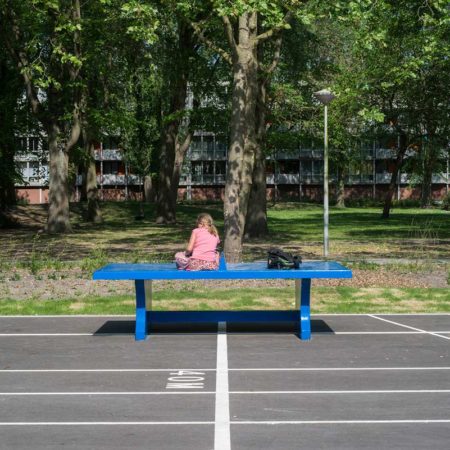 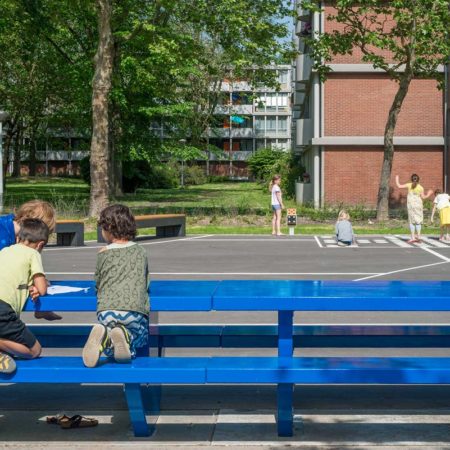 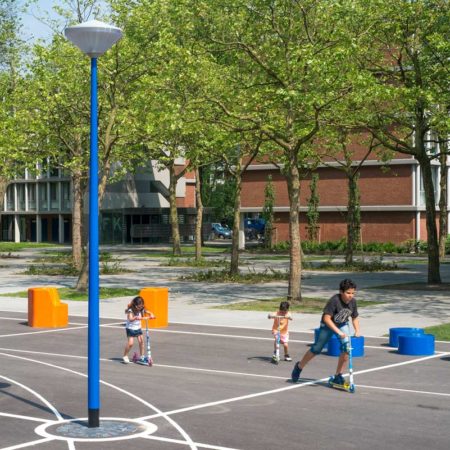 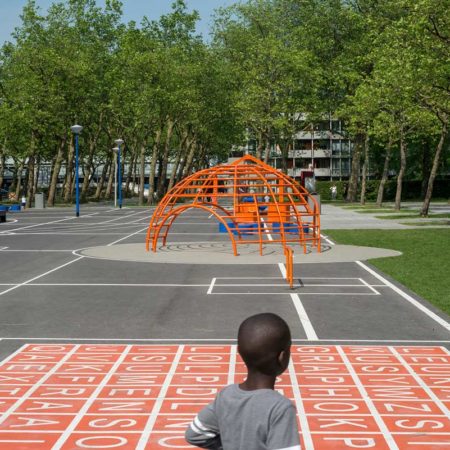 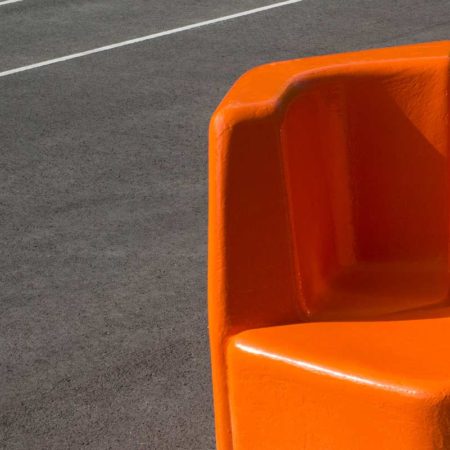 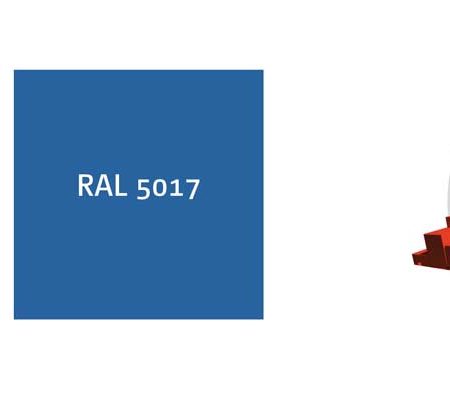 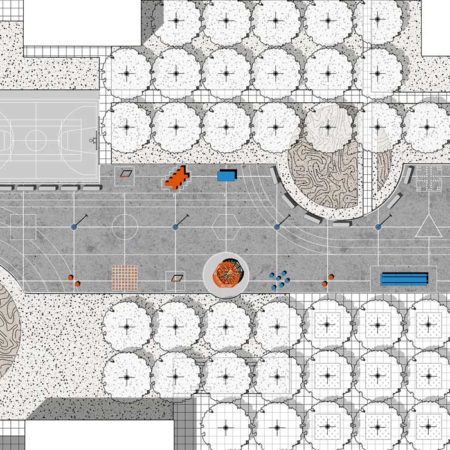 Our proposal ‘Gridgrounds’ creates an elongated public square of 88m x 17m, stretched across the central space so all paths converge here defining a new center for the neighbourhood. The asphalt square is based upon the original neighbourhood grid and the grid is made visual and tangible through the white marking lines running through the space. At the points of the grid we placed different play elements inspired by the modernist playgrounds of Aldo van Eyck in Amsterdam. To create coherence all objects are painted Breedveld orange and blue, two colours that have been used in a recent renovation of the adjacent buildings. Through the cohesion of the colour, each object achieves a new identity, independent works that collectively form an open-air museum of play elements.

The austerity and monotony of the context is broken by the new playscape while employing the same elements and the layout of the Van Gool plan. In this way, the diversity of the play objects, their intensity, and their layout don’t negate the history of the neighbourhood, but build upon it coming together to form a new meeting point for everyone.

The square is framed by the grid of plane trees and grass and planting along the sides, the rectilinear form is punctured at three points by two green circles and a rectangular multifunctional sports court. One of the green circles is an active play space developed with the local schools, the other a passive green space full with biodiverse planting that acts as a sustainable drainage point during periods of intense rainfall.

Given the very limited budget we chose to focus on primarily creating a good functioning public space, a meeting point for all residents at the centre of the neighbourhood. The careful placement of the elements creates different gathering points for groups big or small. Our material palette takes inspiration from road infrastructure, considerably cheaper than usual open space design materials, asphalt surfaces, white road marking lines and “traffic orange” (Ral 2009) and “traffic blue” (Ral 5017) colours. Colourful landmarks make the space identifiable from a distance, an important factor in children’s spatial awareness.

The low cost materials don’t compromise the quality of the space and the range of possible activities, but rather –here in Breedveld- create a solid and durable playscape that can be use in many unpredictable ways by the many visitors, with a relatively limited economical investment. 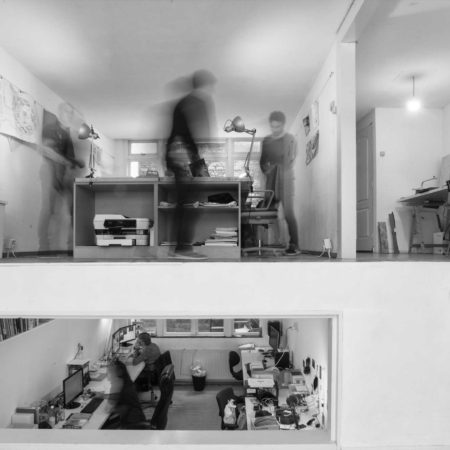