Portland’s Pearl District presents two distinct styles: historic industrial brick warehouses with loading docks, and a growing number of glassy high-rise towers. The Heartline project presented the challenge to relate to both characteristics of the neighborhood and create a public threshold zone. The design responds by dividing the full block site into thirds: two buildings of different architectural types united by a public courtyard.

An early concept of the heartwood and the seedling grew from this city fabric. The 13th Avenue building responds to the large, low warehouses of the historic district with a five-story, brick structure with long docks on either side. Like the heartwood—the hardest part of timber—the design of this building references the durable, mature and rooted qualities of old growth. The 12th Avenue building is much taller and of contemporary design, representing a young seedling reaching up for light. 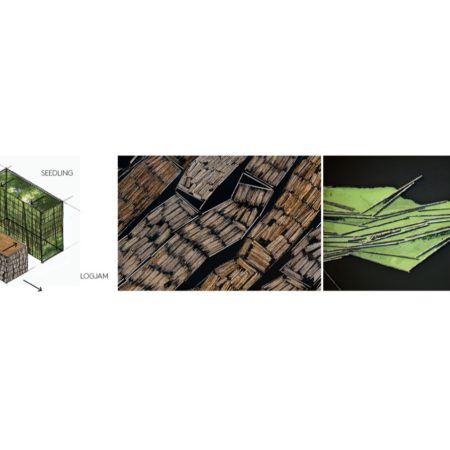 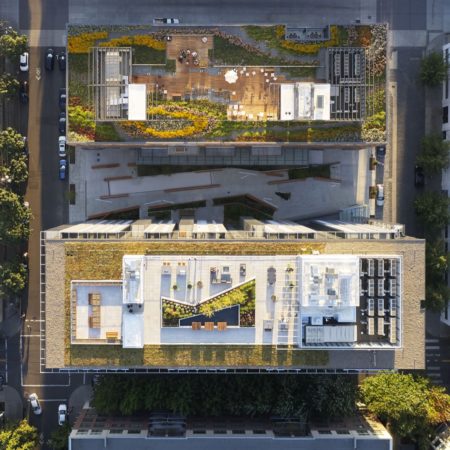 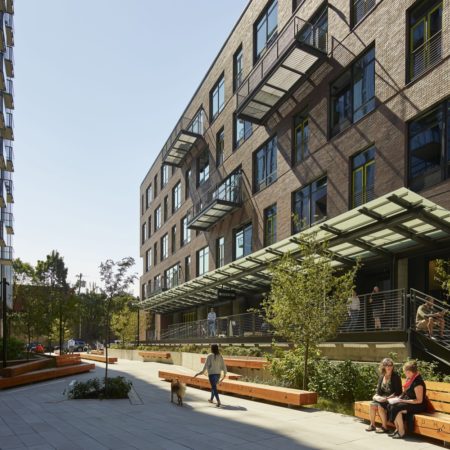 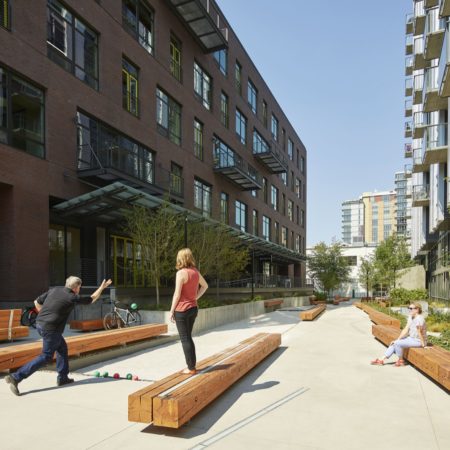 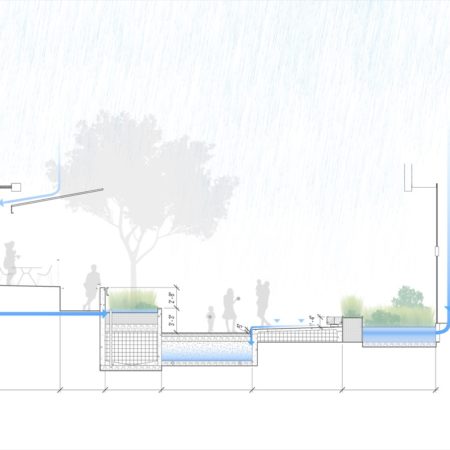 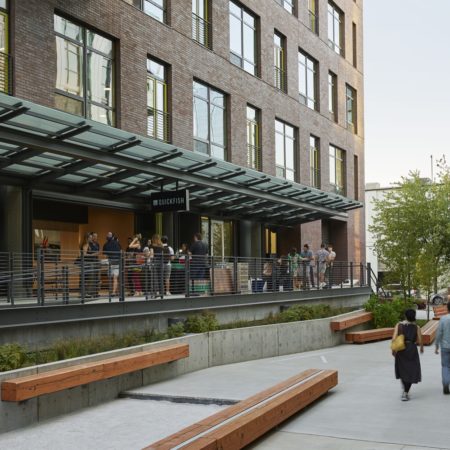 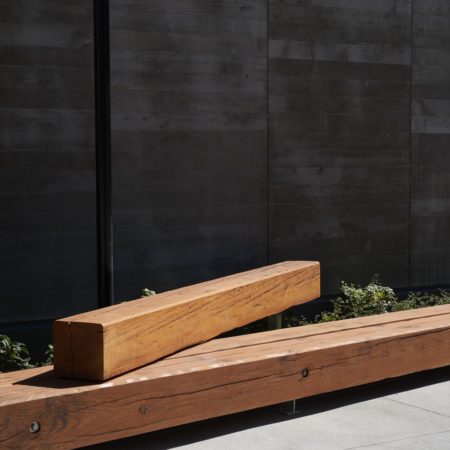 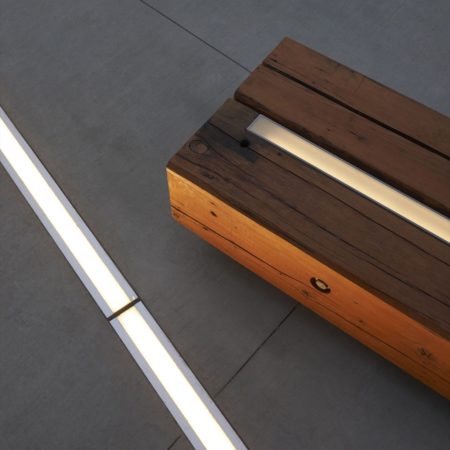 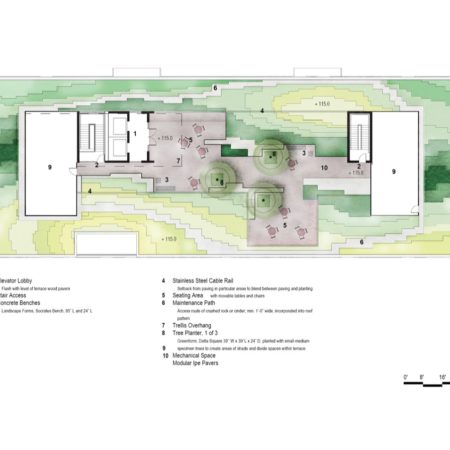 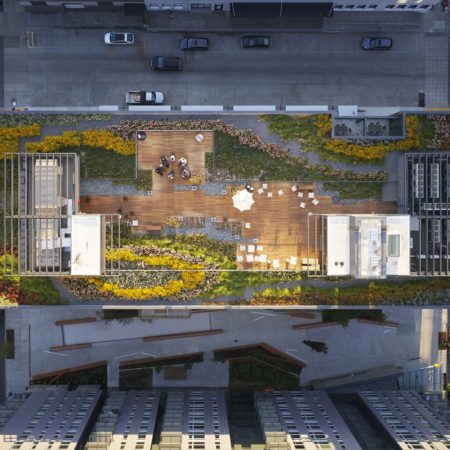 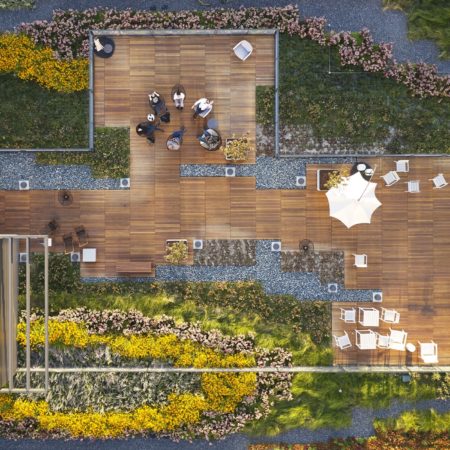 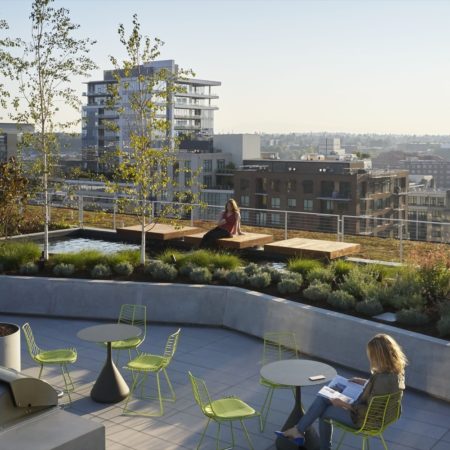 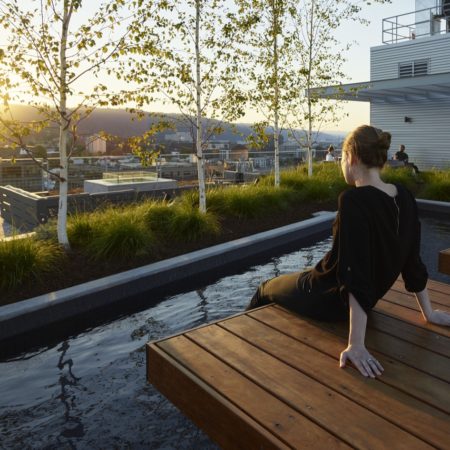 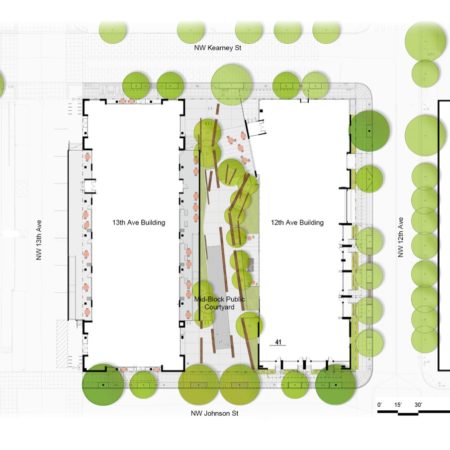 This concept left the challenge of how the public courtyard could mediate and unite the two distinct styles and create a unique open space. The team spent time walking and sketching public spaces in the Pearl District to observe how they were used and what made them successful. Key observations included dappled shade, seating facing the pedestrian flow, simple and clean materials, destination programming, and that people like to pass through a space, not a void. With that in mind, the design team looked back to the history of Portland’s timber industry for inspiration, focusing on the idea of a log jam that would serve as a mediator between the heartwood and the seedling while also giving the courtyard its own unique personality.

The logs move in a north-south direction, defining the programmed spaces and main walkway of the courtyard. Alluding to a jumble of logs in a jam, the timbers are at varying elevations, serving as benches, bench backs, wayfinding and sculptural elements. Timbers define planting areas of contrasting heights, creating visual interest and separation for an outdoor amenity space at the 12th Avenue building.

Embodying history, the logs are salvaged structural columns from a 100-year-old warehouse that formerly occupied the site. Playing off the local industrial history and regional timber industry, logs are mounted on wide flange beams and anchored with steel straps. Linear lights in the ground and bench surfaces add to the log jam geometry, emphasizing the movement of objects through the public space. Concealed lighting below the elevated benches create a shadow so the logs appear to float—like log jams on water.

Portland’s stormwater code requires all runoff to be routed through various means of flow control. Rather than lose valuable courtyard area to stormwater planters, the team thought of alternative solutions, finding space in the void between the parking garage slab and the surface grade. The resulting design routes courtyard runoff to a sand filter in this void and tops it with crushed oyster shell to create a bocce court. Around the perimeter, an exposed drain directs surface flow to the sand filter and doubles as a convenient spot for bocce balls. Runoff from the building roofs is directed to stormwater planters on either side of the courtyard. A mix of native and adapted plants are featured in the courtyard, with taller species of plants aggregating at pinch points between the logs like material collecting in the intersections of a log jam.

The heartwood and seedling concept is further expressed on the buildings’ rooftops. The 12th Avenue roof offers open views of the city and private outdoor space for the residential building’s users. This space is defined by one large central planter, emerging from the roof with a banked wall that expresses the idea of upward growth. On one side of the planter are wood platform seats over a shallow pool. The other side of the planter expands to provide multiple gathering spaces around a fire feature and outdoor kitchens. A further roof space provides garden plots for building residents.

Recognizing that the 13th Avenue roof would be visible from the neighboring 12th Avenue building and other high-rise development, there was opportunity to be playful with its green roof. The design expands on the project concept, organizing drifts of plant material to create a wood grain pattern. Where the roof slopes, creating areas of greater soil volume, large perennials and shrubs are planted. In contrast, drifts of river cobble and sedums create patterns in the shallowest portions of the roof. Set within the planted wood grain are outdoor gathering spaces for the office building’s users. The overall impact of the vegetation pattern, striking to look down on, also is surprisingly nice to gaze through.

Timber has been a cultural touchstone in this region for millennia, with continued resonance today. Heartline connects the old city growth to the new, the heartwood to the seedling. 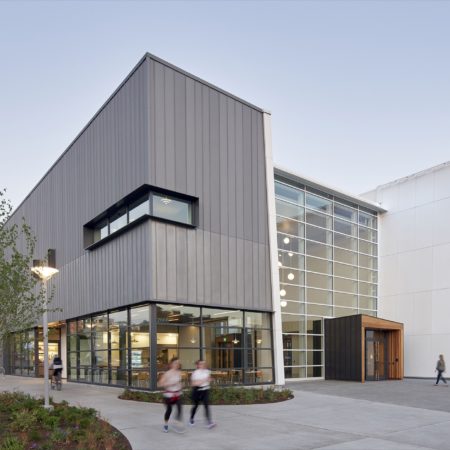