Skövde is a middle-sized Swedish town halfway between Stockholm and Gothenburg. The city has a long history and lot of qualities but struggles as many other cities in the same size with declining focus and activities in the city center. A development that has a lot to do with the expansion of external shopping centers and overall change of use of the public space. This project – Hertig Johans torg – pinpoints the value of the public space as an important identity for the smaller city.

During the spring of 2016, LAND won the invited competition for Skövde’s central square; “Hertig Johans torg” with the adjacent street – “Hertig Johans gata”. In Skövde a lot of people arrives with train. The train station – “Resecentrum” – is just a couple of hundred meters from the square with Hertig Johans gata in-between. A goal with the project was to create an obvious and distinct connection between the square and the train station with the street and the park as important mediators between the two. A layout that aimed to preserve the representative character of the urban spaces but at the same time adding new activities constituted the basis for the overall project scheme. 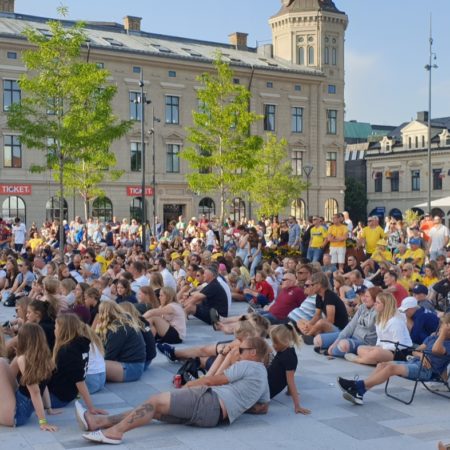 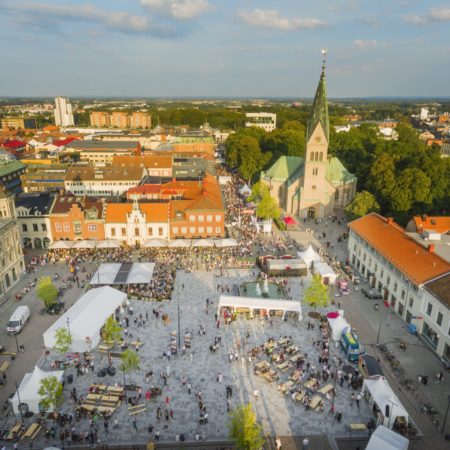 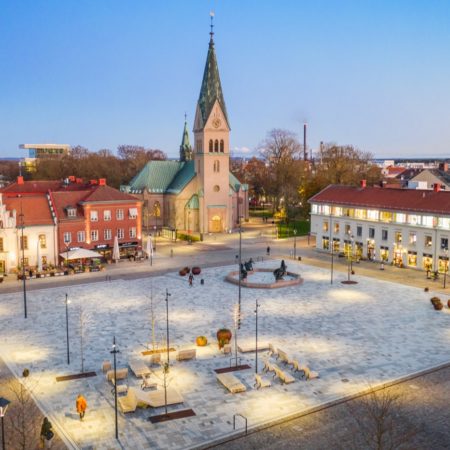 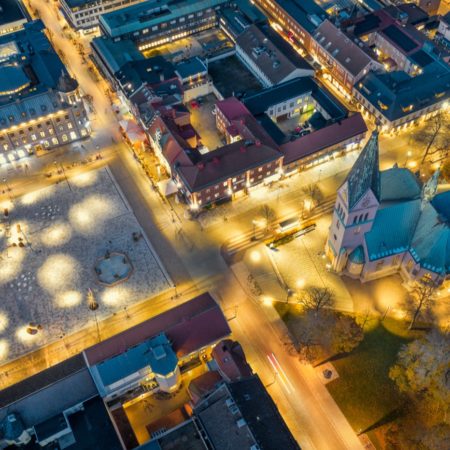 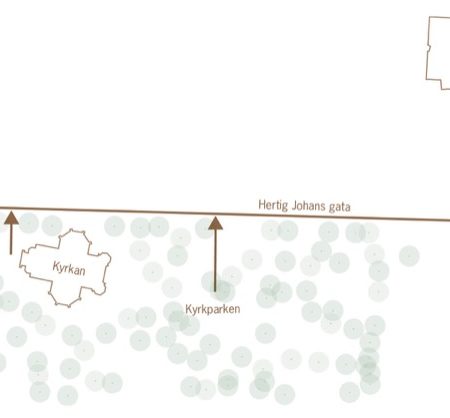 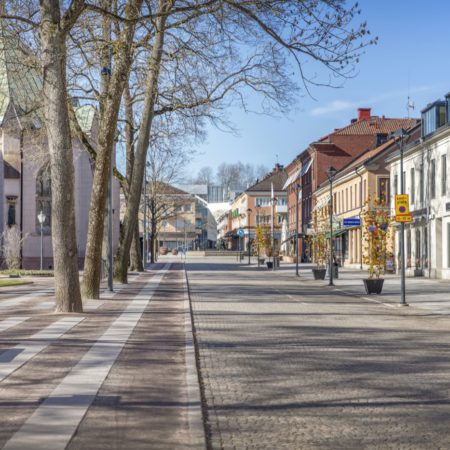 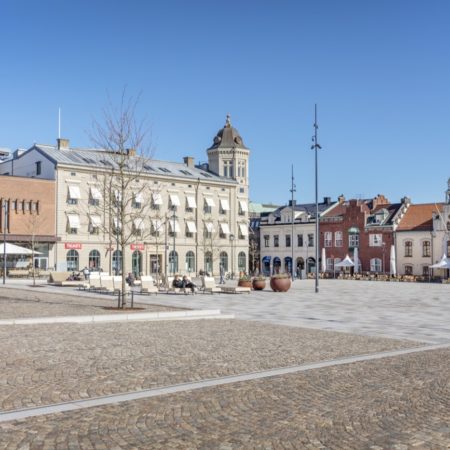 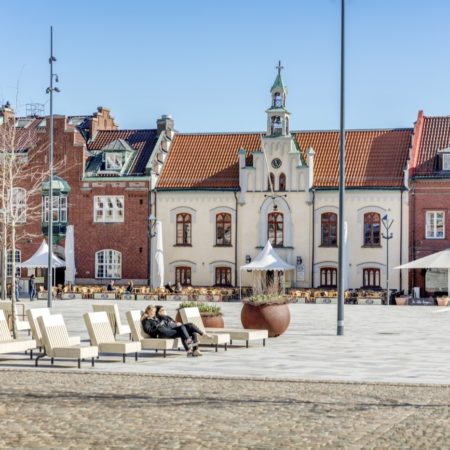 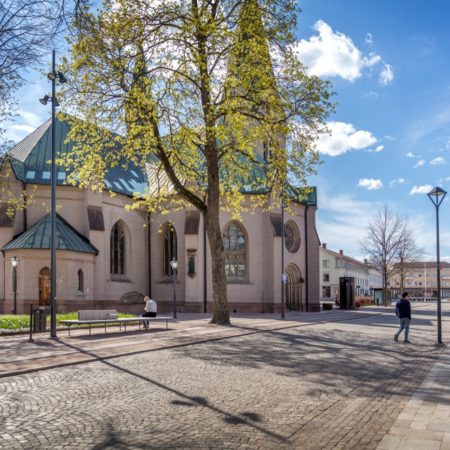 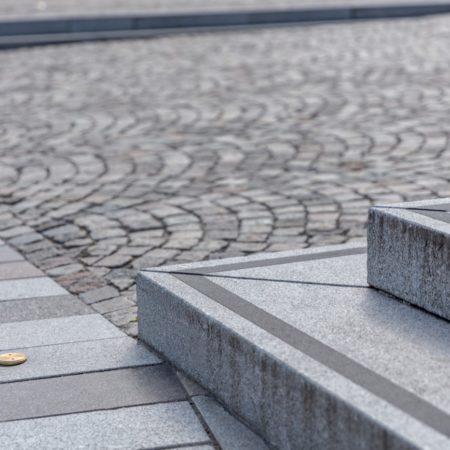 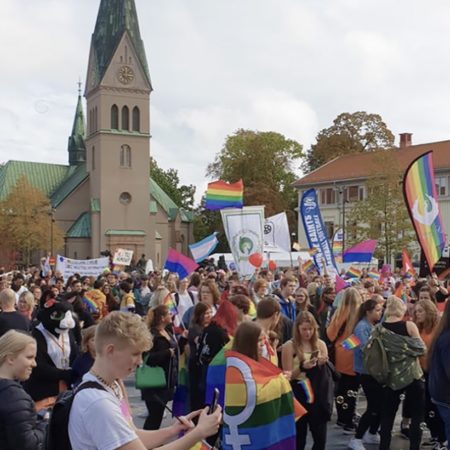 In LANDs layout Hertig Johans gata is spatially reinforced with a straight park path that runs along the street and planting zones which are mixed in with the existing trees. This new outline is inspired by the historic interface between the street and the park and emphasizes this important zone. The pavement is widened to provide more space for outdoor dining and pedestrians and connecting streets are more clearly connected to the street.

The square dates back to the Middle Ages, a large recess in the grid city. It is a unique urban space with an evenly sloping plane of around 3,5% down towards Skövde church. The main idea is to turn the square towards the church and create an inner part of the square with a flatter slope of 1,5%. A stair that evens in the middle and has two steps in front and two in the back creates the space. This flatter surface allows activities that were difficult to carry out in the square before, such as various larger events, larger seating groups, etc. and increases accessibility on the square. The scale is at the same time broken down into several levels while preserving the feeling of an open large space.

The inner part of the square is twisted in the same angel as the church in order to bring the church as a central motive. The square is furnished in this direction with stone slabs (five different stones, in six different sizes and treatment), new tree plantings, a large seating group specially designed for the project and smaller plantings in urns that all contribute to spatial qualities in the smaller scale. Under the new trees a large planting bed are established that take care of all the stormwater on the square and the adjacent buildings.

Hertig Johans torg shows the importance of the public space and what a smaller city can achieve with the right focus and effort. The project has been carried out in close collaboration with the municipality, the shop owners and restaurants around the square, and local carpenters and contractors have been engaged in the construction phase. Since the official opening in the autumn of 2019, several large events such as a food festival, events with big-screen TV and various manifestations have taken place and around the square and along the street several restaurants with outdoor seating has been established. During the ongoing Corona crisis, the square has become an important meeting point for people which can only be seen outdoors. The many different way to take a seat and enjoy the open space contribute not least to this. 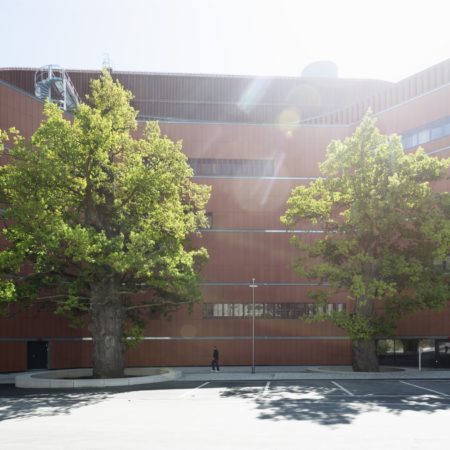