The site of the garden is a small piece of 19th century Moscow squeezed in between roads and new residential and office buildings in the very centre of the city. Times ago the house was a part of a large mansion with vast territory. After the revolution of 1917 and during the Soviet period the majority of building was destroyed, the territory was appropriated by different government organizations. When the client owned the property for the business residence it was an abandoned house with overgrown plot of land. Our task was to create a space hidden from outside views both from streets and windows and to locate a bunch of service functions on a tiny plot. 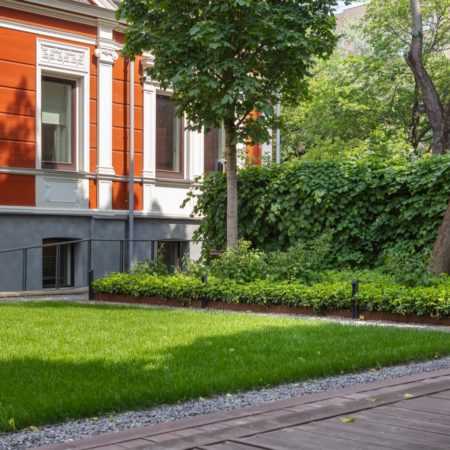 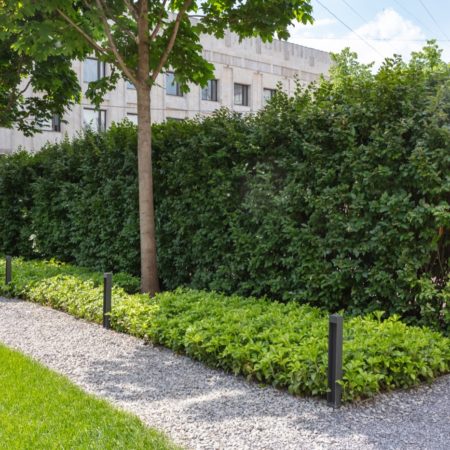 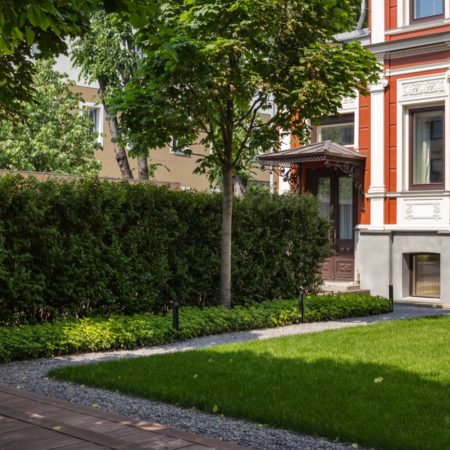 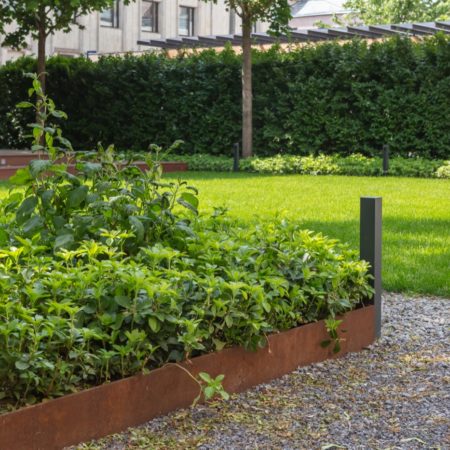 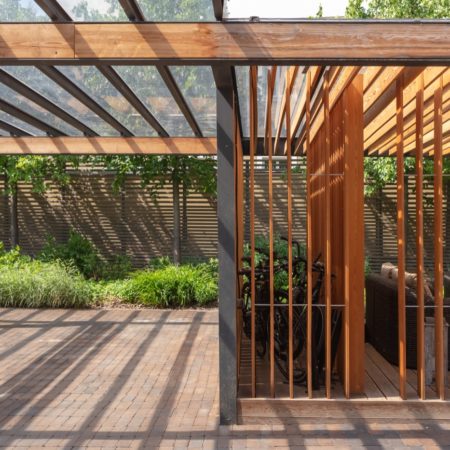 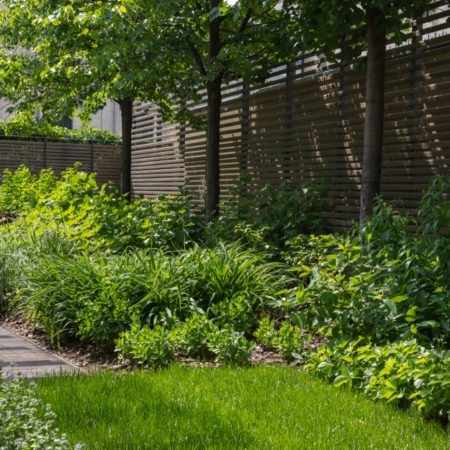 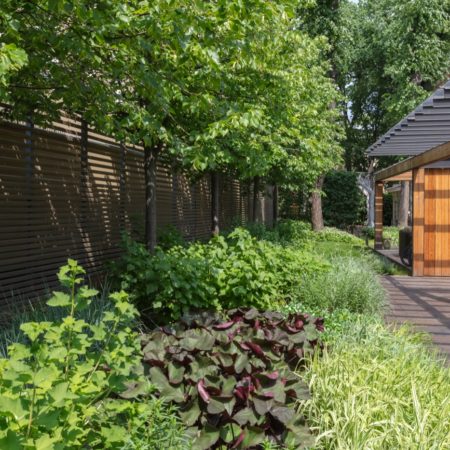 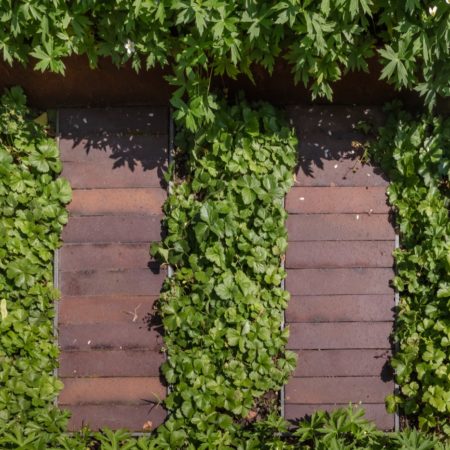 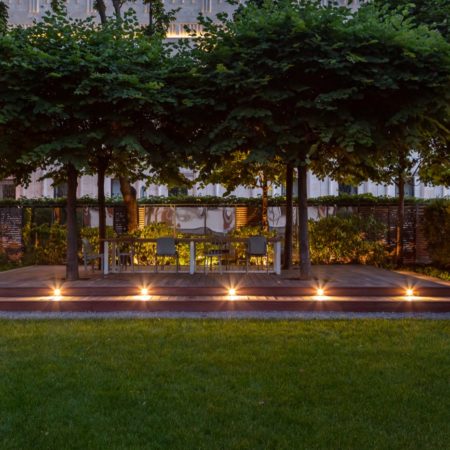 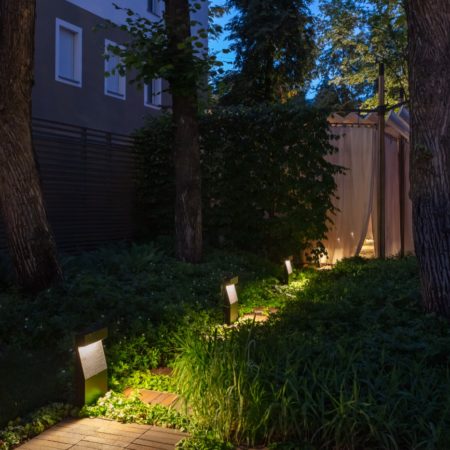 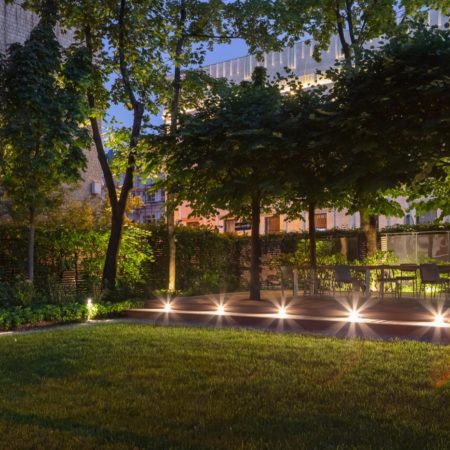 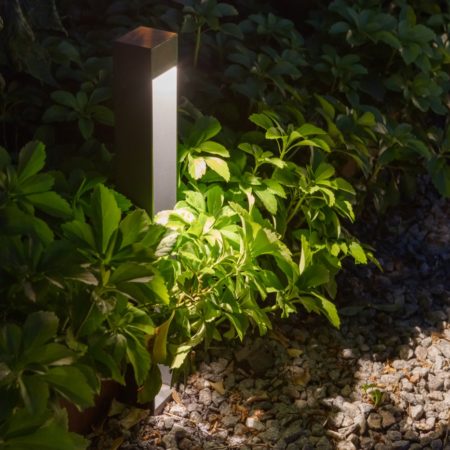 First of all we started from looking for what can and worth to be preserved, and how we can use those remnants from the past. We discovered the remains of old linden alley on one side of the house. The trees were in bad conditions – there was asphalt that covered the root crown. They were freed and the alley was prolonged with the new lindens. Along this axis the service functions were placed covered with the wooden canopy. The house itself was also excavated from late layers. This allowed to create an open wooden terrace around the building and visually enlarge the façade.

The main façade was complemented with the symmetrical composition of lawn and the dining area under the lindens on the opposite side. There were few maples on the site in good condition which already hid part of the garden from the outside – they were kept and added with the new ones.

The site is very small and becomes a continuation of the house. Different open air rooms appeared there – dining room, meeting room, terrace, kids area, kitchen garden, garage. The idea of plants choice was to use them as natural architectural elements that can form the space. Thus, the linden hedge was used for walls, the pleached lindens with pruned crowns for making ceiling. Other plants of different height for dividing the site and hiding the inhabitants from the curious looks.

The site is lower than the surrounding area and there was no possibility to use city drainage system. All water is gathered on the site and managed through the passive filtrating system.

The kids house was added in 2019. There was a request for the tree house but the old lindens are very fragile to place anything on them and the new trees are still very young. The solution came to place the structure among the old trees as it is hugging but not touching them. The area under the house will gradually be overgrown with ferns and other shade-loving plants, and the construction will slowly merge into the greenery.

The main challenge in this project was to create a secluded space amid the bustling Moscow, like a teleport from stress to relaxation. We tried to return the original function of the house and its territory – place to live in and feel comfort and safe. Despite the noisy neighbourhood, high buildings around, constraints of underground engineering systems and space limitations we think we succeeded to do this.