Hoekenrodeplein forms the link between the Amsterdamse Poort shopping centre and the Arena Boulevard. With the redevelopment of the New Amsterdam Building, the square has been developed as one of the final phases of the Zuidoost Centre Area. The existing, U-shaped building that wraps around the square was expanded on the ground and first floors, and now accommodates public functions, such as a hotel and hospitality facilities. This redevelopment, along with the desire of the municipality to also allow events to take place on the square, made it necessary to revise the earlier design by karres+brands from 2006. 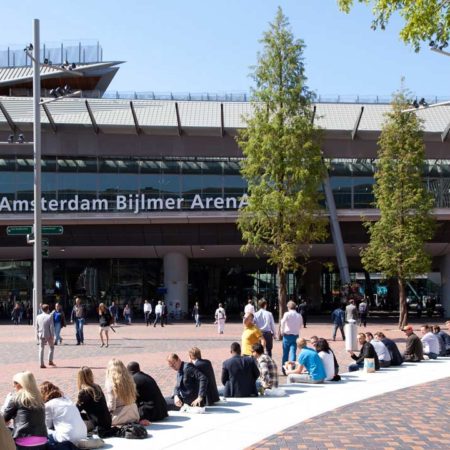 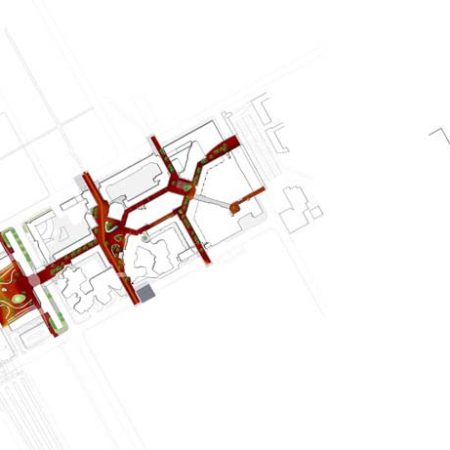 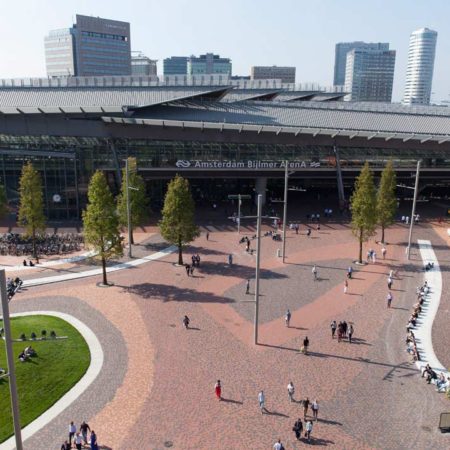 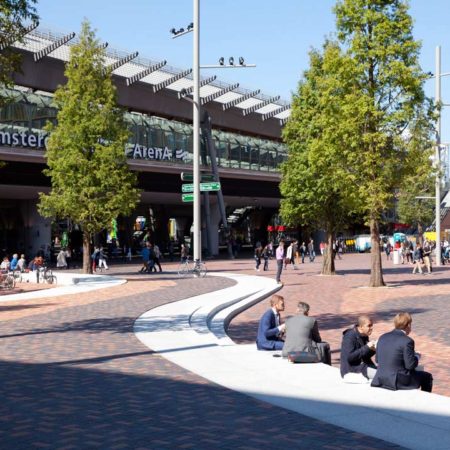 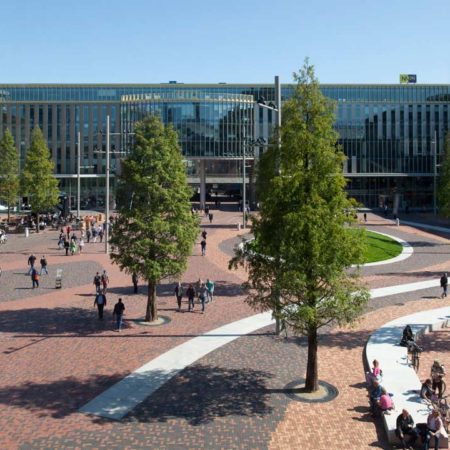 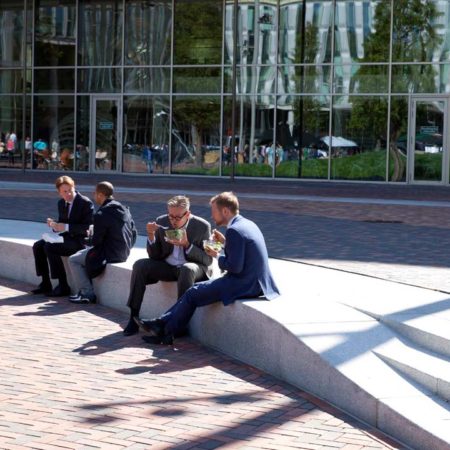 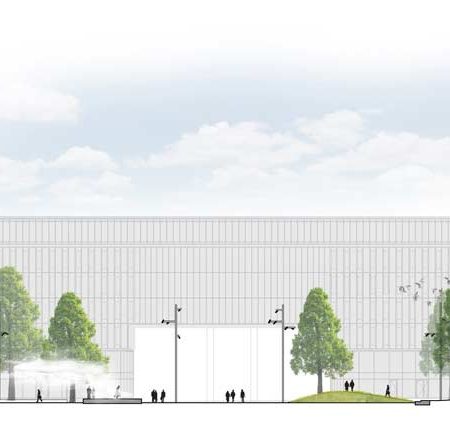 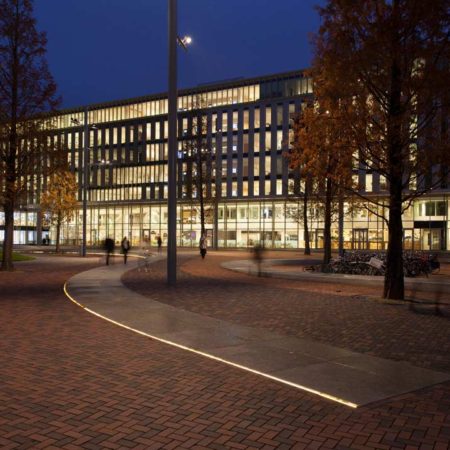 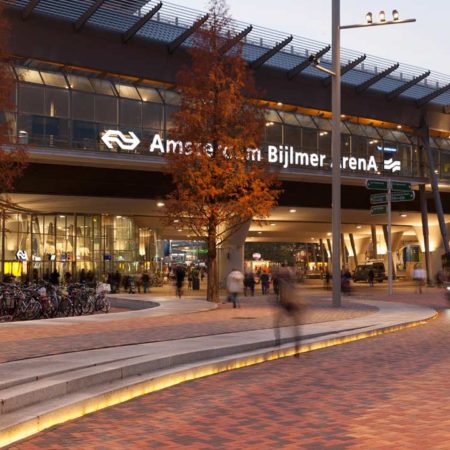 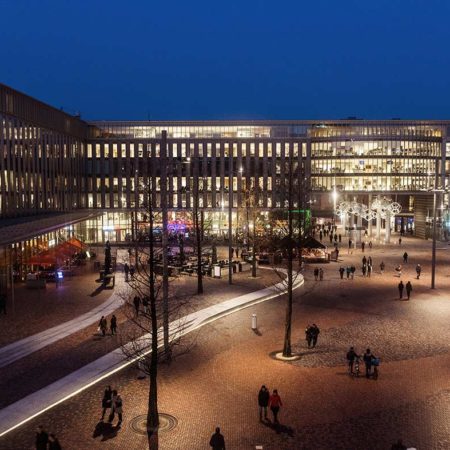 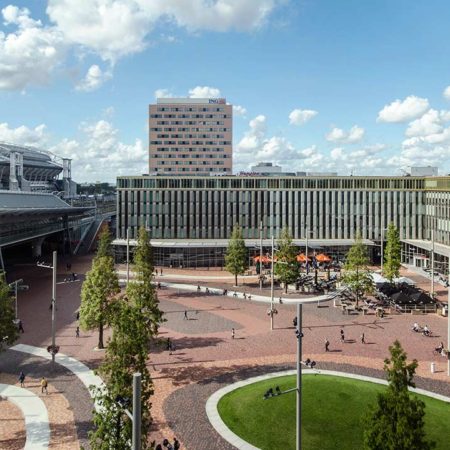 Hoekenrodeplein, because of its convenient location next to the Bijlmer Arena station and the nearby Amsterdam ArenA football stadium, several hotels, shops, and new restaurants, is the most important square in Amsterdam Zuidoost. The design is based on logical pedestrian connections within and through the area. The elevation differences in the square are bridged by stone borders that guide pedestrian flows and create pleasant spots to spend time. The combination of baked bricks and solid borders of natural stone connect to the organisation of the Arena Boulevard and Amsterdamse Poort, which karres+brands also designed. A spot is reserved on the square for a future food services pavilion. This site is temporarily outfitted with a green hill, where people can lie in the grass on a sunny day. Hoekenrodeplein is thus a public space that is both equally comfortable for five people or for thousands. It is a connecting link between the boulevard, train station, and shopping centre, a ‘foyer’ for both the Arena Boulevard and the Amsterdamse Poort shopping centre.

Centrally located on the square, positioned in the midst of the main pedestrian flow, will be a remarkable water and light object. During the day, the object’s elevated seating edges invite relaxation or play. In the evening, the object turns into an interactive light fountain. Special to the square’s design is the Smart Light lighting plan, which provides the space with various ambiences. In collaboration with Lichtvormgevers, Philips, and Cisco, karres+brands designed this dynamic, adaptive, and interactive lighting scheme. Various light scenarios with a range of atmospheres have been composed for different times and uses: one moment, the square is an entertainment area or events plaza; the next, a transit area for commuters or a gathering space for football fans. Using sensors, the lighting of the public space responds to the amount of people in the square and to the current activity. Yet even more is possible: with a smartphone app, a street artist can reserve a time slot in the public lighting scheme. The light dims slightly and a spotlight comes on, while a video camera transmits the images of the action live on YouTube. Along with this video gallery of street performances, and in addition to its physical appearance, Hoekenrodeplein gains significance for the city in virtual space as well. 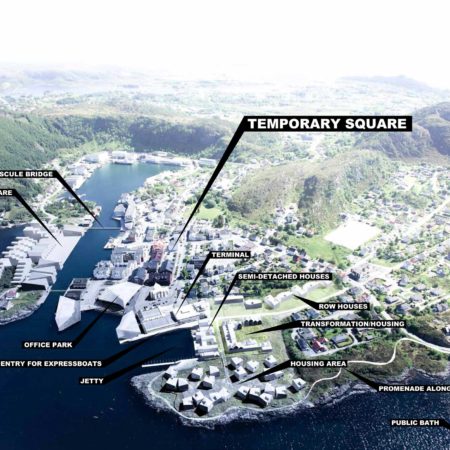