The garden with its forest like atmosphere was really the starting point of the project. The private garden remains constant as the peculiar expression of the individual but should be set in context to the native landscape. Therefore the Gesamtkunstwerk out of architecture, interior and garden mirrors the nearby green forest as the Munich suburb “Grünwald” is named after.

Entering the gravelled entrance courtyard from the street in the west corner of the property, you leave the outside world behind. One Catalpa tree placed to frame the house cast its shadow on two huge subtle positioned stonewalls that guide to the entrance of the house and hide the main garden space from the street. Winding steppingstones carefully set lead to the canyon like entrance of the main house. Directly opposite t you see a small” elves gate” that invites visitor for a stroll in the garden if you accept the invitation and follow the steppingstones. 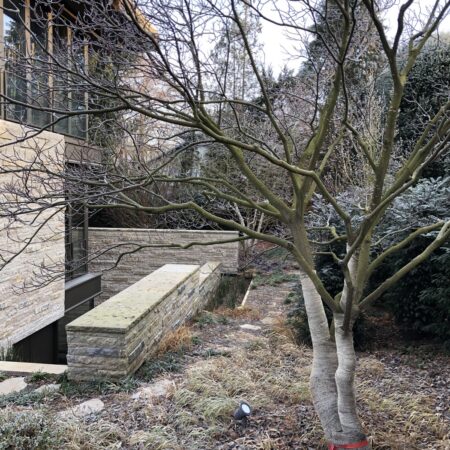 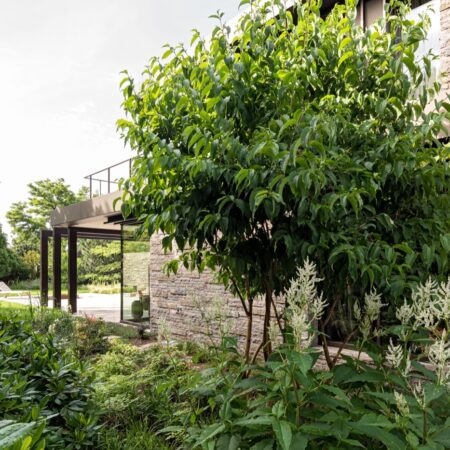 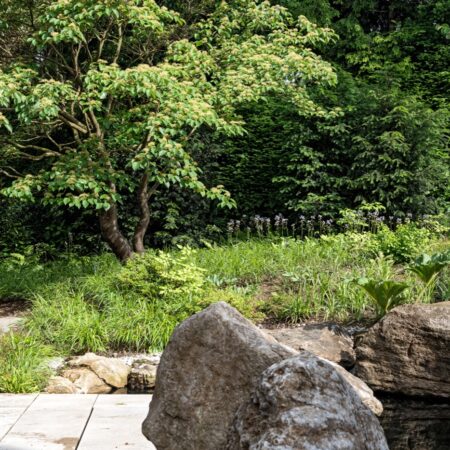 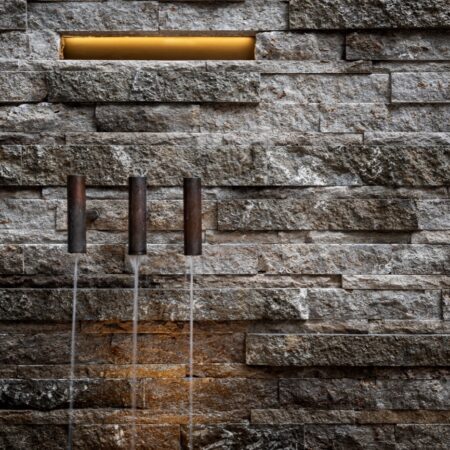 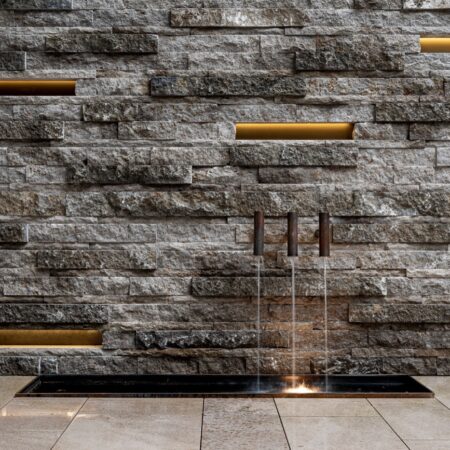 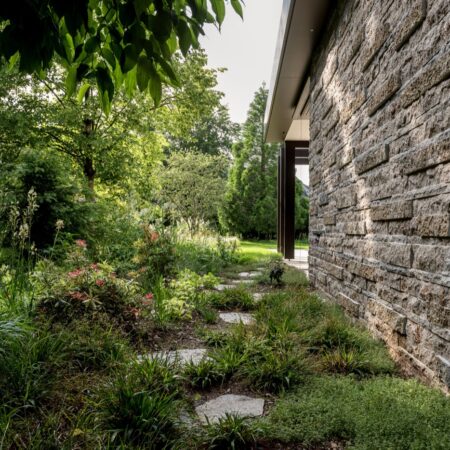 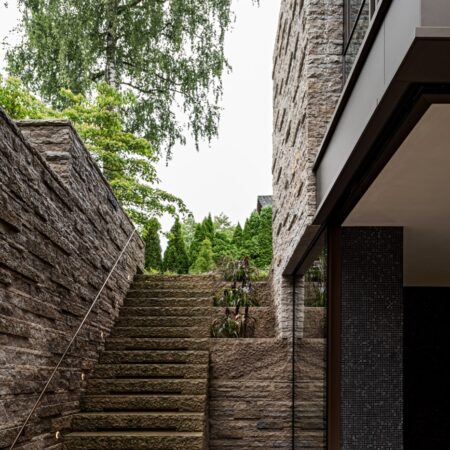 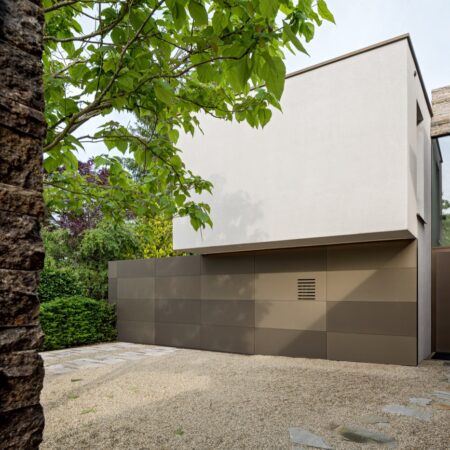 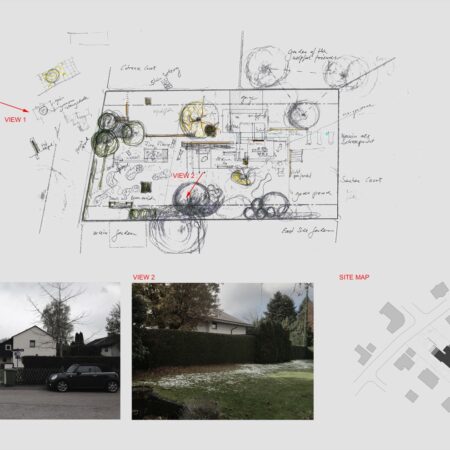 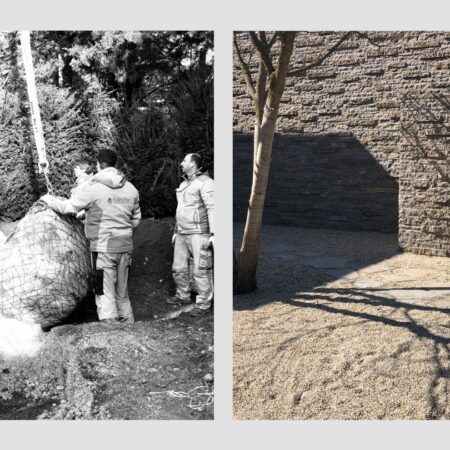 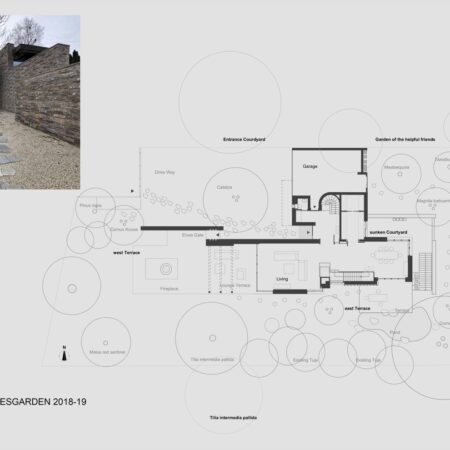 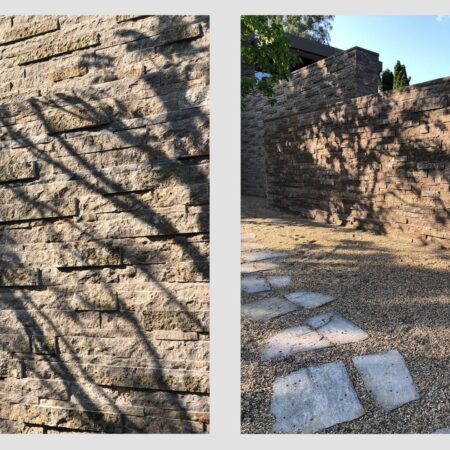 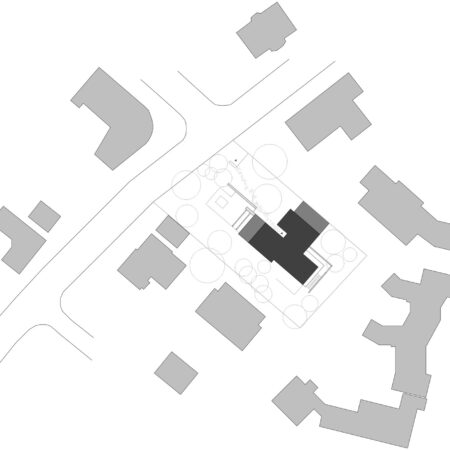 I design buildings to complement my Gardens.
The garden is seen as a continuation of the rooms of the house almost as a series of separate outdoor rooms each of which performs a separate function; the richness of the garden is slowly revealed. Long stone walls ground the house like a plinth in 3´rd dimension, reflect light and the heat of the day in the evening at the west facing oversized very urban terrace. The west sunny grass garden attached to the living room serves as lounge area and entertainment zone at the sunken fireplace at night. It is also the view from the first-floor lady’s sleeping room with a large Tillia to hide the neighbour. Facing south, the very long elevation is mostly closed. Two vertical openings let direct sunlight in the depth of the room. The harsh sunlight from the direct southern sunlight is filtered by large existing conifers hiding the borders to the neighbours. The filtered green by large trees is reflected inside by the shiny bronze plastered fireplace and the glossy painted ceilings. The light outside is absorbed by the green; The play of shadows is absorbed inside at the dark toned oak floor and the walls covered with grass wallpaper.
The dining area opens to the south east side terrace to a dark natural pond and has a view to the garden of the “helpful friends “facing east, This former leftover room behind the garage is transformed to little forest blurring the boundaries to the neighbors following the concept of borrowed landscape and Japanese forest bathing. The beauty of a female Magnolia is here the eye catcher from the bathroom guarded by a Taxodium distichum and a Metasequoia. Her magic bloom in spring is intensified by a 6 meter high taxus hedge of the neighbour working like a dark canvas. A major dream of the owner was to have her first garden she dreamt of since her childhood with many trees to be her friend, which she selected personally in a nursery.
The last almost secret garden space is a stone cladded sunken courtyard giving daylight to an earthy plastered Spa in the basement with a dark tiled workout pool. At night mystically illuminated by wall niches and a little water feature.
Der creation of the Garden is understood first and foremost as an attempt to re-engage with Nature and her inherent spiritual calmness. The content should express the owners preferences but also those of the plants the choice of which should respond to the site and the nearby forest. In most cases the artistic value of the garden is proportionate to the degree of simplification carried out. The 12 arriving trees are already defining the atmosphere of the space, therefore very few plant species were chosen: Hyacinthoides, hackonachlea macra, ferns, Luzula sylvatica in the mainly shaded areas. Grasses and seasonal blooming perennials for the sunny street facing garden in the West.
Garden is a place where the archaic meets the modern. The garden has arisen as an urban phenomenon and has always existed as a delicate overlap of nature and architecture The modern house has to extend into outdoor space and to be integrated with its environment and if there is no environment is has to be invented.
The spirit of this garden is evolving to a natural understanding of gardening. There is something calm and delectable in this garden without an obvious spiritual signification. In a little optimistic and very aggressive time an attempt of creating spaces that touch your heart. 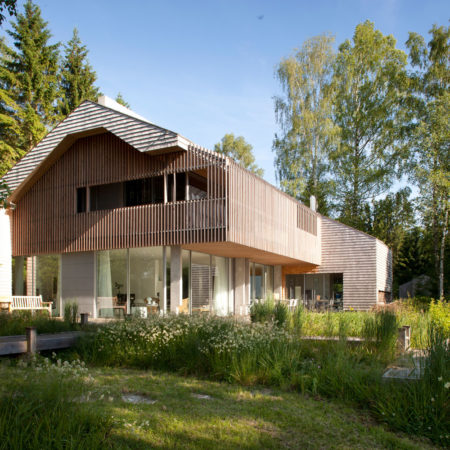