Landezine
International
Landscape
Award
House on the edge of the woods

The brief for the project was to integrate a new house and garden into its surrounding territory so that the garden would feel like an entirely natural extension of the adjacent woodland whilst also belonging to the agrarian landscape beyond. The client’s requirements were:
• To restore remnants of a former woodland that the site sits on
• To weave the new house into the existing woodland
• To minimise the visual impact of the adjacent lane
• To use the reclaimed materials from the demolition process
• To provide a naturalistic landscape that celebrates the quiet beauty of nature
• To minimise the influence of incongruous elements in the existing landscape while emphasising views
• To reinforcing the sense of scale and contrast between the agrarian landscape and the woodland
• To promote a sense of wildness and tranquillity through the seasons
• To promote health and wellbeing both passively and actively
• To harness and utilise the exposed nature of the site

The new residence was situated on a hilltop within the rolling Hampshire landscape of southern England. It was perched on the edge of a deciduous ancient woodland overlooking an arable landscape. Views from the property focused south towards the South Downs National Park whilst the existing woodland guarded the northern back of the house. The elevated position of the property was subject to strong winds which swept up the valley.  The garden itself came from an almost blank canvas where farm workers cottages were being demolished and a new property was being put in their place. The only element retained was the vegetable garden in order to keep the site ‘alive and breathing’ through the build. 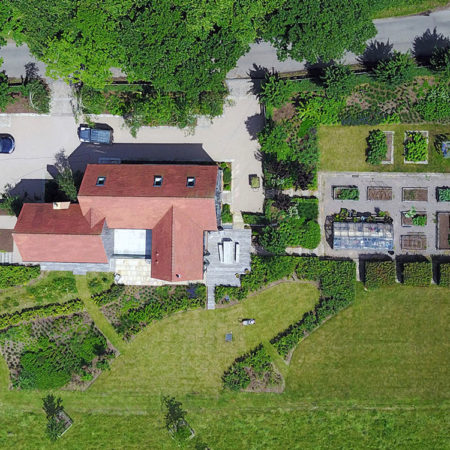 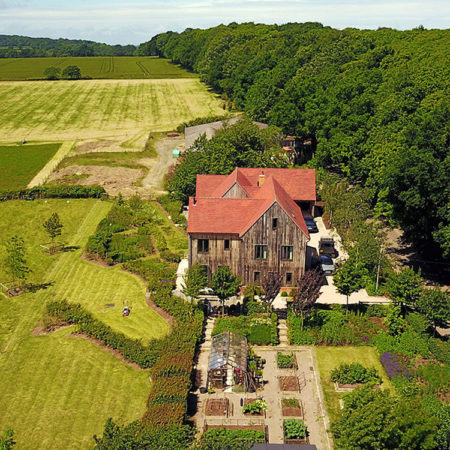 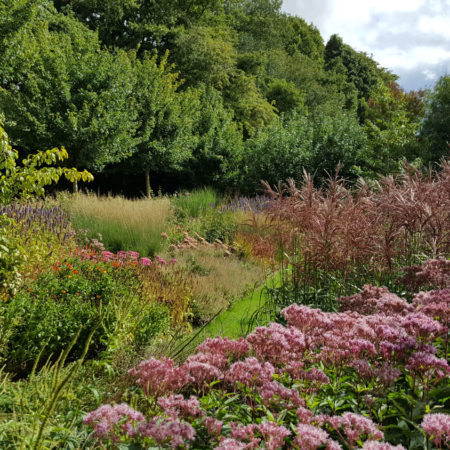 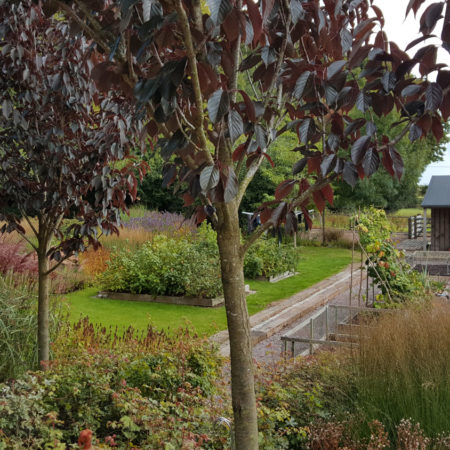 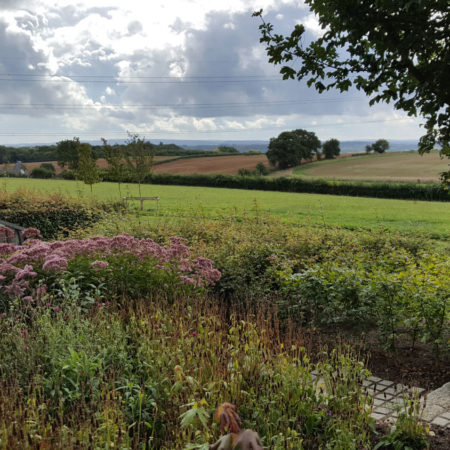 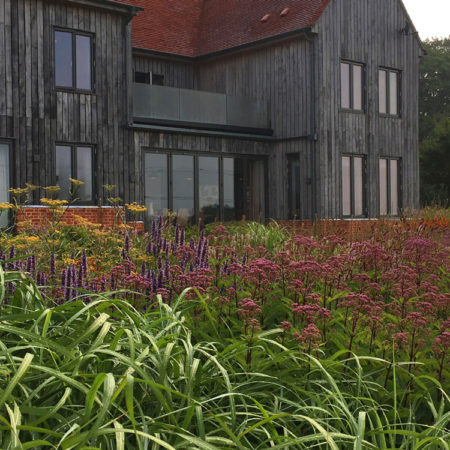 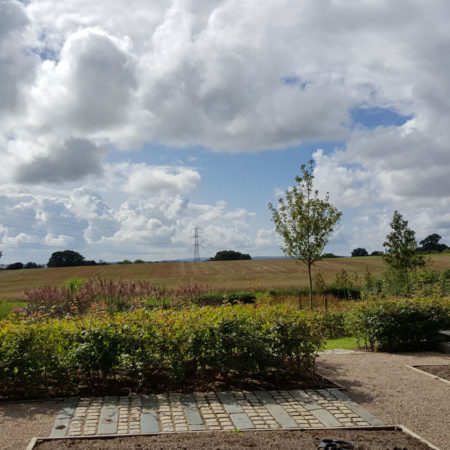 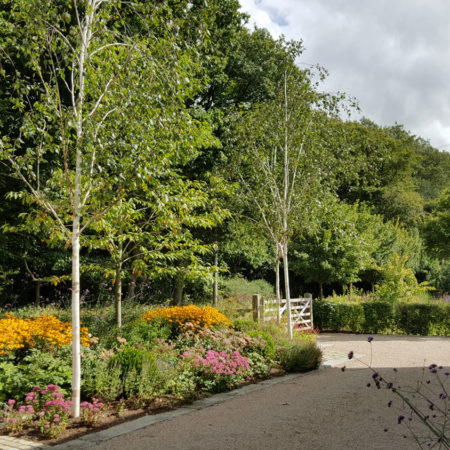 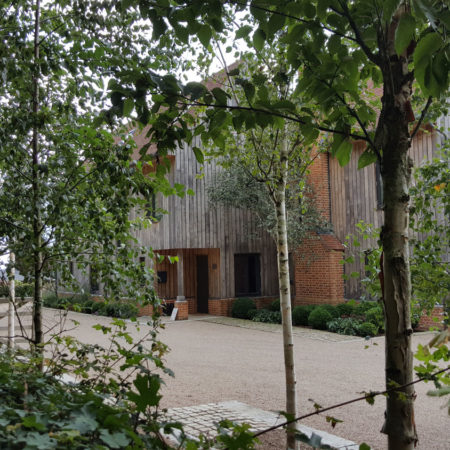 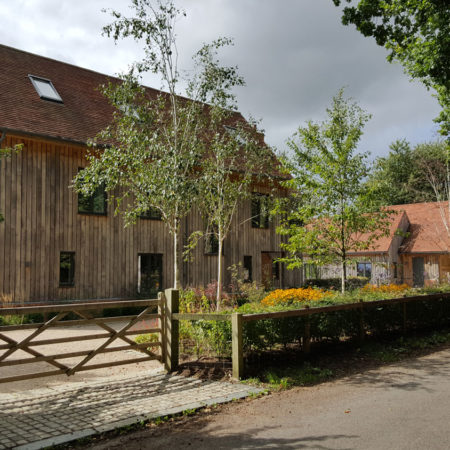 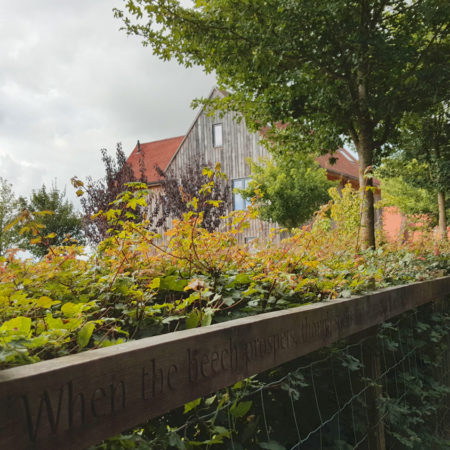 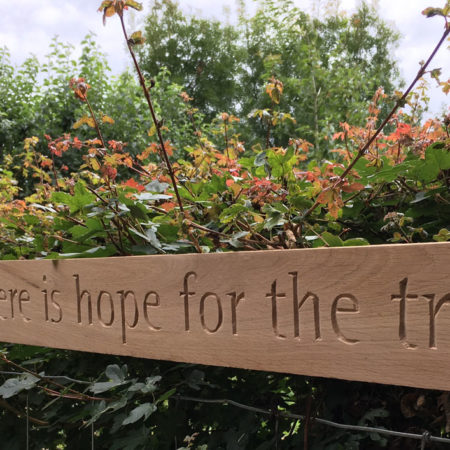 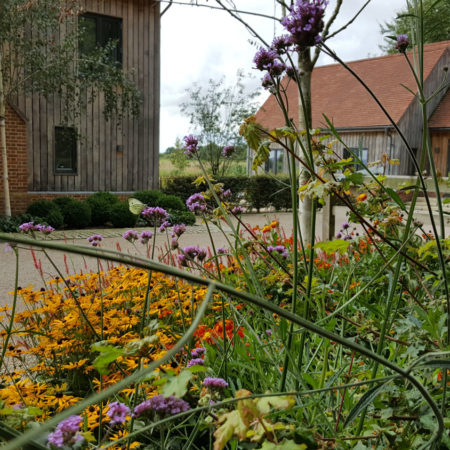 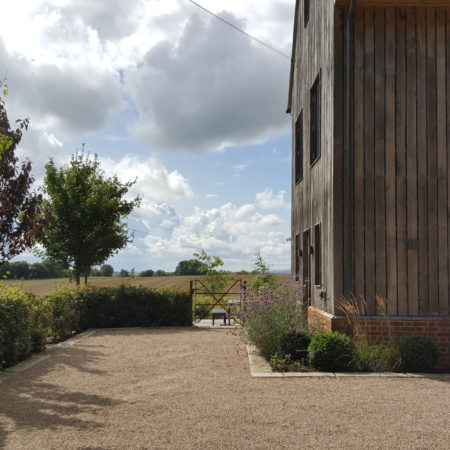 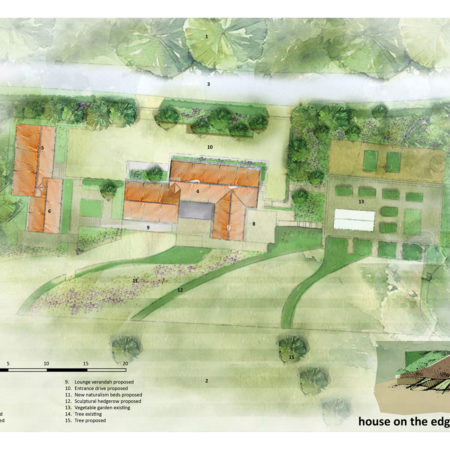 The starting point for the design was a study of the historic mapping for the site dating to 1875 which illustrated loss of woodland. The design sought to restore the woodland absorbing the new house into the edge of the woodland. Research into the new naturalism movement led by Oudolf, Kingsbury and Pearson, their bold artistic visions and desire to create sustainable and biodiverse landscapes rich in wildlife led the planting design.

Using naturalistic placement of trees at differing scales and ages allowed the house to be scaled and woven into the existing woodland. The trees adjacent to the lane minimise the visual impact of the road and will eventually mould into the existing woodland canopy over the road creating a tunnel effect. Birch, a native woodland edge pioneer species found within the adjacent woodland was planted alongside several climax species chosen for the future, including hornbeam and oak.
Retaining existing trees to the west and east of the site gave an immediate scale to the new buildings using the natural elements on the site. Careful placement of semi-mature tree planting within the agrarian landscape removed the visual influence of pylons in the distance. While views were maintained through to the wider horizons of the South Downs where the passage of weather could be viewed.
The structure of the design consisted of curved bands of planting sweeping across the landscape from the woodland and into the fields, mimicking the movement of the prevailing wind across the arable fields. The design language was reinforced by bands of field maple hedgerow cut as if shaped by the wind with large swathes of new natural planting and wildflower meadow transitioning into the adjacent paddock.
Surrounding the house is a structure of granite cobble setts and kerbs with reclaimed natural gravel.  Oak decking is used to create spaces extending from the house and buildings marrying them in with the oak clad walls of the structures.  The original house and hardstanding were crushed on site and the materials processed to construct the bases for the proposed hardstandings and foundations.
The lane is a route well used by walkers and as part of the experience of sensing the garden it was decided to honour the trees planted in the garden and surrounding woodland. Lines chosen from Cad Goddeu : The Battle of the Trees; a medieval Welsh poem were carved along oak rails fixed to the boundary. The poem refers to a traditional story in which the legendary enchanter Gwydion animates the trees of the forest to fight as his army. The trees from the poem are species planted within the garden.
The retention of the vegetable garden and introduction of several breakout spaces to the lounge, kitchen, garden studio and summer house together provide fantastic health and wellbeing opportunities for sitting outdoors as well as ongoing maintenance and growing. Passive wellbeing also occurs through views from each window of the property of the trees which change throughout the seasons and the ornamental grasses and perennials which harness the wind and provide fluidity.

Preparing the presentation for the award I approached the client for his view on the garden now it is maturing. His response is below unedited:
“The garden exceeds our expectations on so many levels.
The quiet beauty of it through the seasons reveals a sense of place where the balance of what was natural on the site has been absorbed, into what is man made through the planting, its structure and the relationship it has with the weather. The movement in the wind of the planting beds and the trees is a constant source of delight that relaxes and stimulates the eye at the same time. The ever-changing colour palettes and structural form of the planting provide a constant source of expectation through the seasons; even in winter when the skeletal forms of the trees echo the woodland to the north.
The garden completely binds the farmed landscape to the south with the protected woodland to the north. As the garden grows the sense that time is passing and the site is returning to nature tells us that the work done in designing the garden is complete.”