In the typical Lingnan water town, the grey space of the waterfront is suitable for the climate. Therefore, plenty of public space interspersed in Huanglong Village is the most popular and charming activity places. The ones integrated with nature become close-to-water camps for residents to live, chat and entertain. 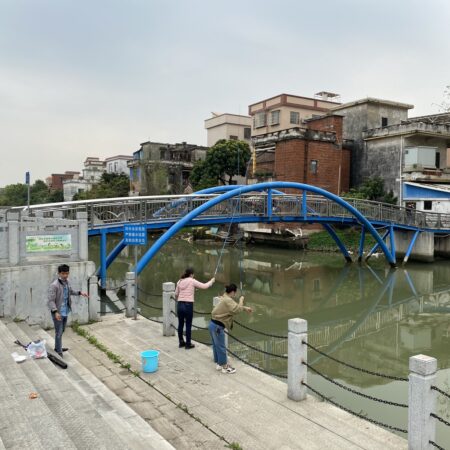 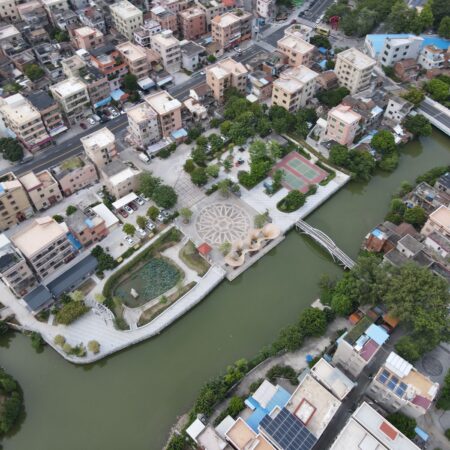 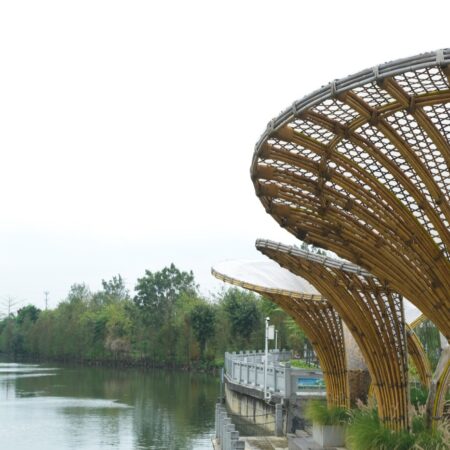 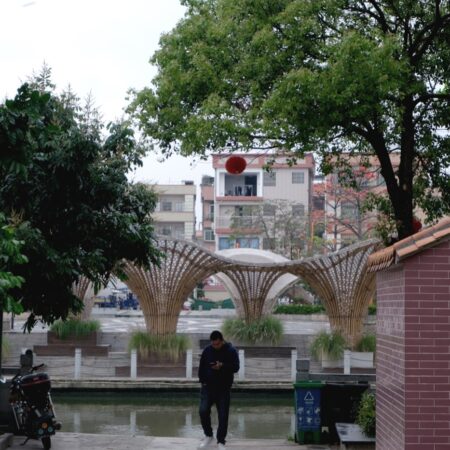 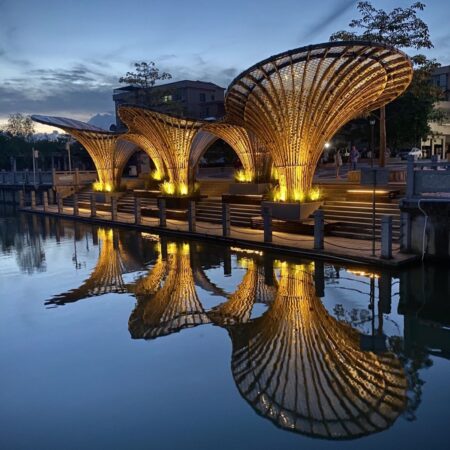 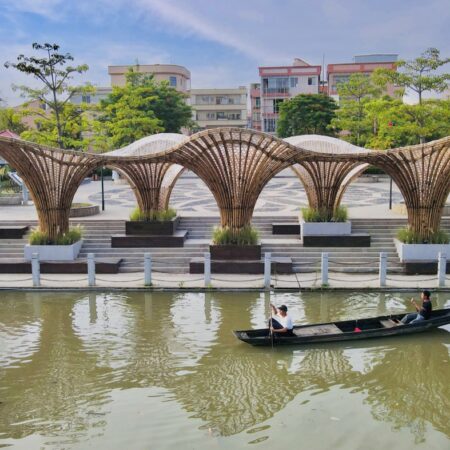 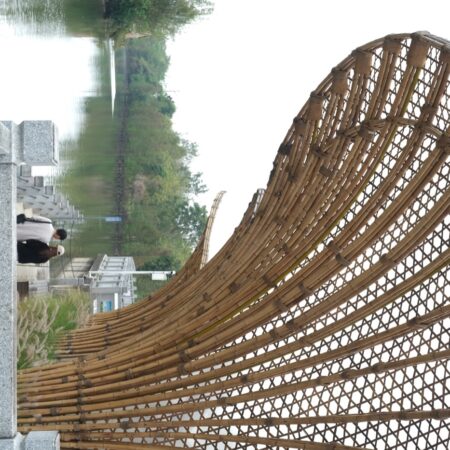 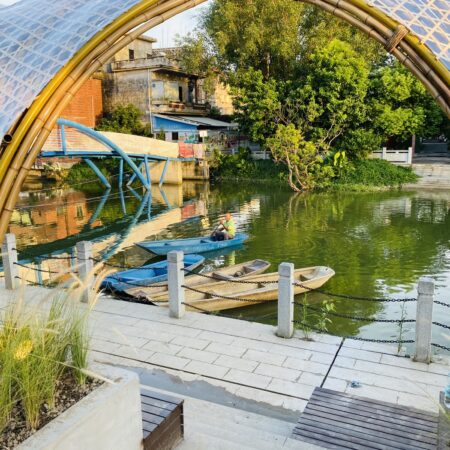 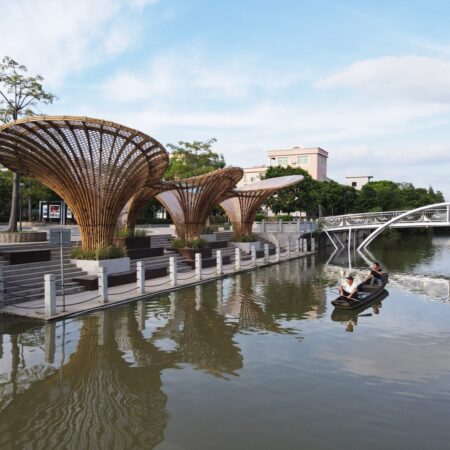 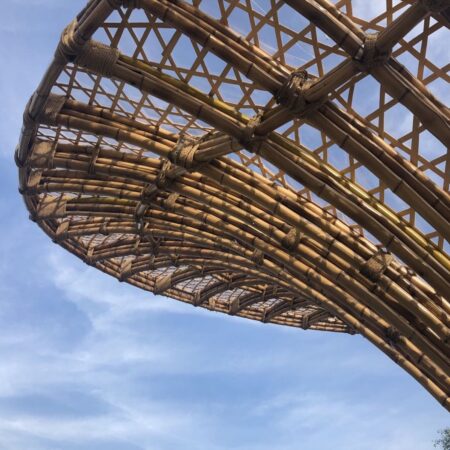 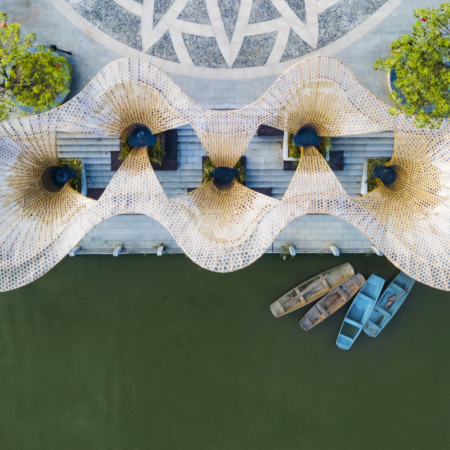 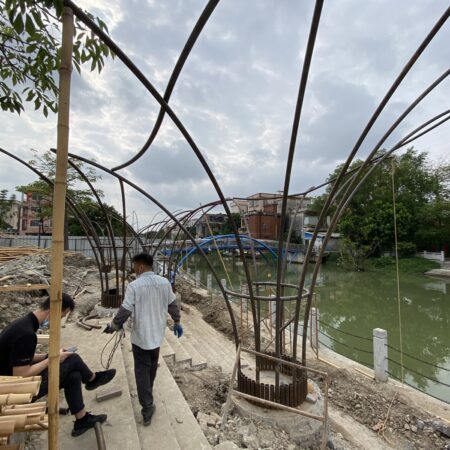 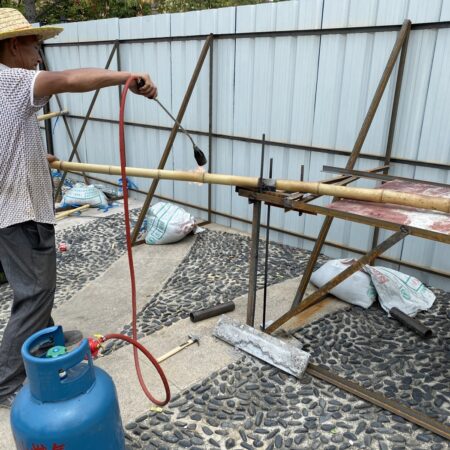 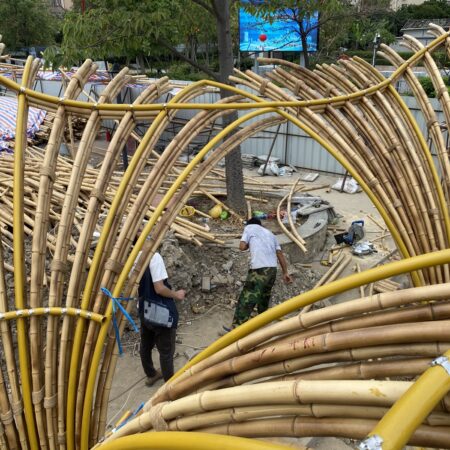 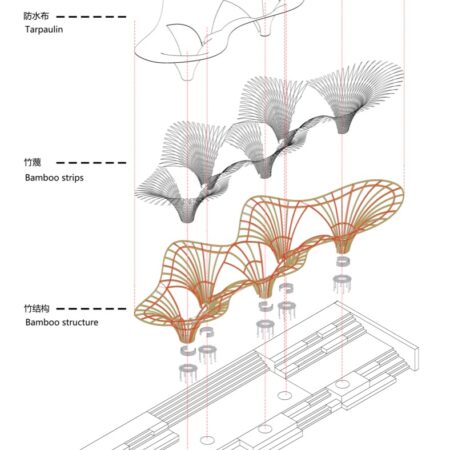 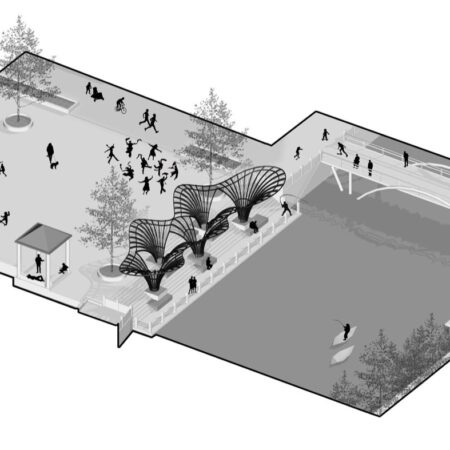 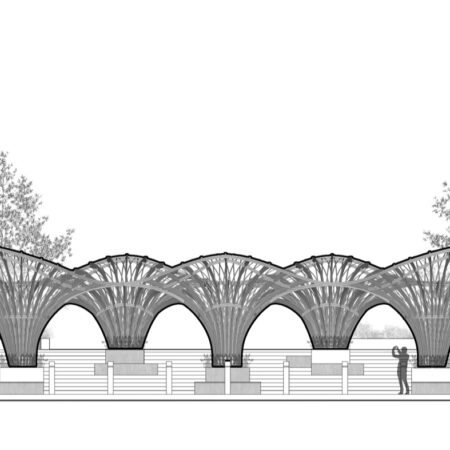 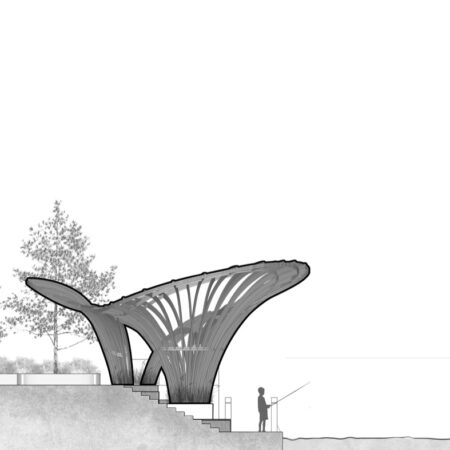 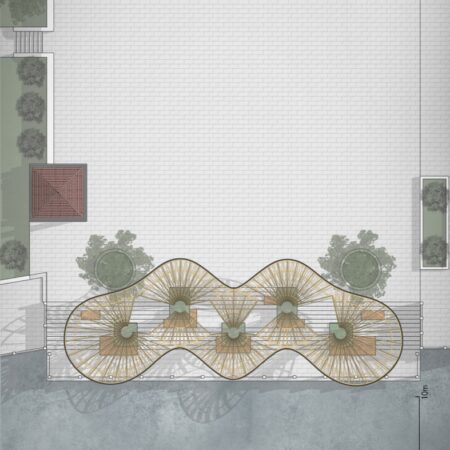 Huanglong Waterfront Bamboo Pavilion is located in the newly-built Liyusha Park in the centre of Huanglong Village. Although Liyusha Park had sufficient square space and a waterfront landscape, it was unpopular and negative because it lacked a lush plant landscape for enjoying the cool and recreational space for sheltering from the sun and rain. In the process of site research, we found that villagers often went fishing and took activities at the waterfront descending steps in the park. If we add a piece of shade, we could turn this place into a popular space for villagers and tourists. Therefore, we decided to build a waterfront bamboo Pavilion at the waterfront steps, hoping to provide a cool place for residents and tourists who enjoy the water culture of Huanglong Village.
The bamboo Pavillion adopts a double-side cantilever method, utilizing the toughness of original bamboos to realize the integrated design of structure and facade. Combined with the steps, it provides the maximum waterfront grey space. The Bamboo Gallery is multi-functional, integrating recreational space, water theatre and wharf in one and activating the new look of Huanglong Village.
Huanglong Bamboo Pavillion is very popular among villagers and tourists. After its completion, numerous people rushed to take photos in it, and various activities have been carried out, such as fishing, sightseeing, recreation, families’ entertainment, fitness, and photography. As a result, Liyusha Park has gathered more popularity and has held folk activities such as Winter Melon Culture Festival, where people redefined and interpreted stories and scenes together, making their relationship closer.

Huanglong Bamboo Pavillion tries using the modern design and construction of low-carbon raw bamboo materials and combines the craftsmanship with the aesthetic feeling of traditional bamboo weaving in rural areas. As the result, villagers can have familiar feelings to the bamboo corridor, and the bamboo corridor can integrate into the surrounding environment. Each bamboo has reached different curvatures after being baked, and traditional bamboo weaving techniques are applied to build the surface of “umbrellas”. The combination of traditional materials and parametric technology activates the exploration and application of sustainable traditional materials.

We adopted the structural selection of “integration of the structure and facade”. Utilizing beam-column, the original bamboo staggered joints are spliced to achieve a longer overhanging length, and the interior hidden steel skeleton cooperates with the stress to achieve the shape.

On the one hand, the bamboo weaving on the surface provides interesting light and shadow changes and a sun-shading environment for the internal space. On the other hand, the skin effect increases the stability and integrity of the overall umbrella-shaped structure, and a transparent waterproof film is laid on the top to shield the structure from rain.

We had an attempt on applying our study of bamboo structure on a previous project. During the last attempt, we started from the concept of modularization, and then realized a unilateral overhanging bamboo corridor by means of repetition and mirroring. In this project, we also use the same design logic of modularization, but achieve a more dynamic and stabilized umbrella form through structural optimization.

From this attempt, we have gained valuable experience in parametric design and construction of bamboo structures. It makes the difficult parametric technology more two-dimensional and easier to understand, and is more conducive to the popularization and application of parametric bamboo structures in real-life practice.

Other landscape architecture offices involved in the design of landscape: School of Architecture, South China University of Technology 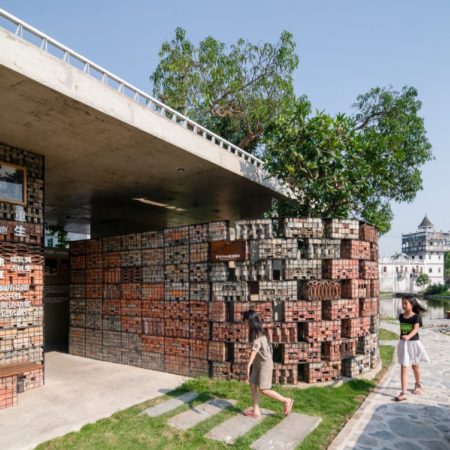