What used to be a gloomy, grey traffic area at the back of the railway station is now a lively city square that functions as a new urban link in the city center of Hengelo. Its exuberant vegetation and state-of-the-art skate park set it apart from other railway station squares in the Netherlands. The Industrieplein clearly presents Hengelo as an inclusive city moving forward to a sustainable future. 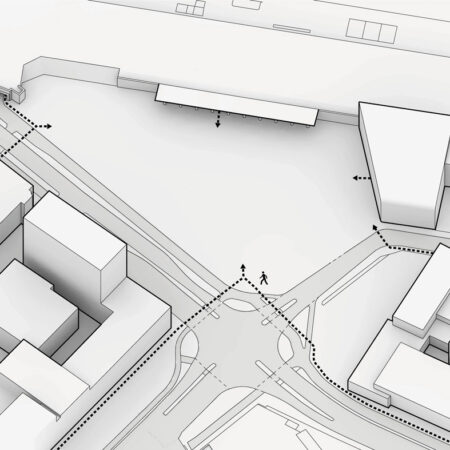 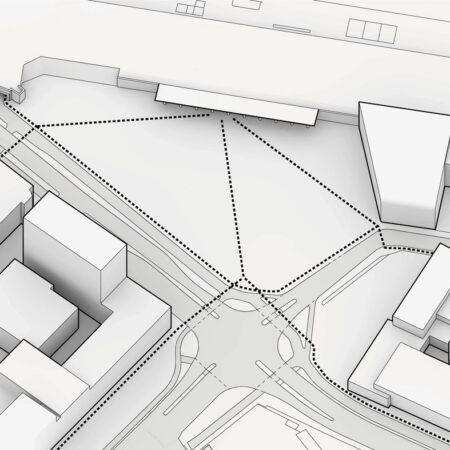 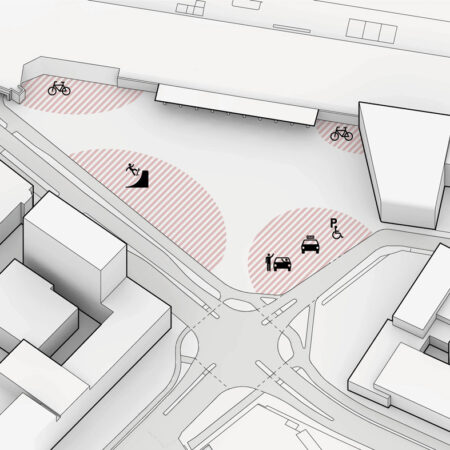 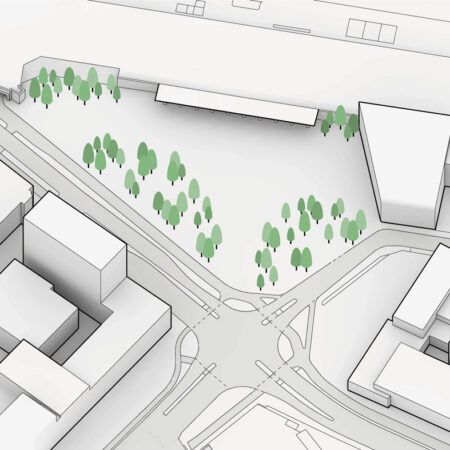 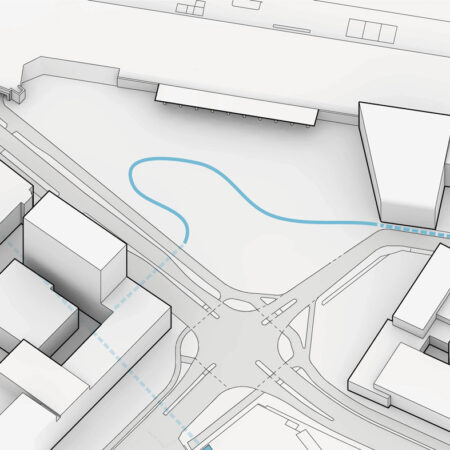 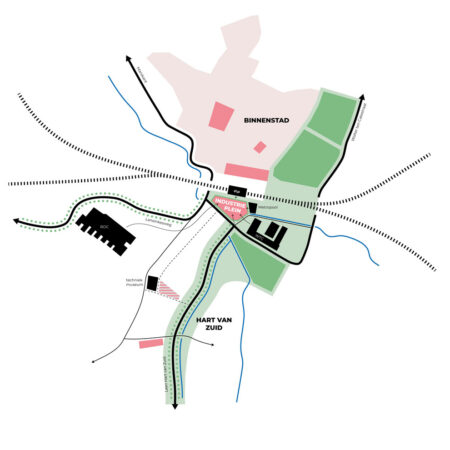 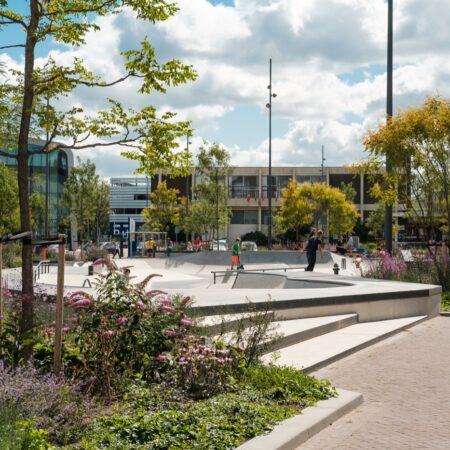 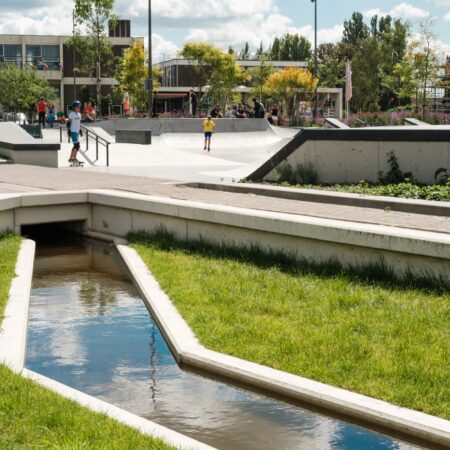 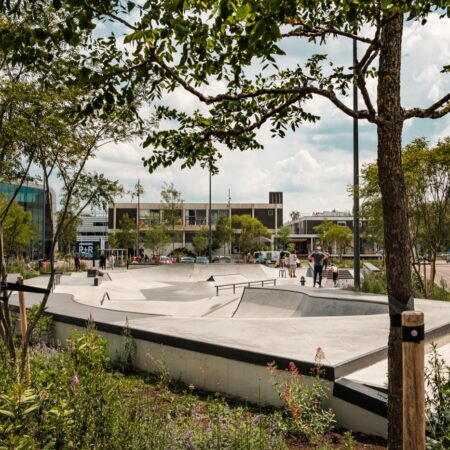 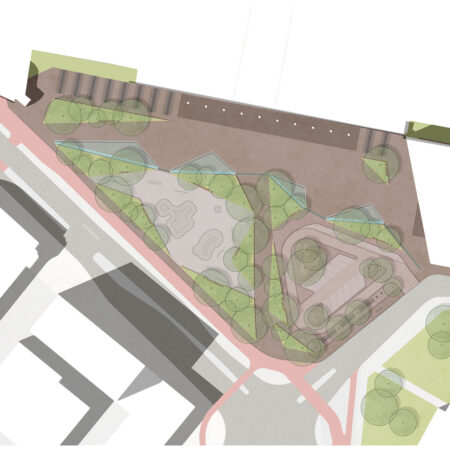 The reason for the complete makeover of the Industrieplein is the redevelopment of a former industrial area south of the city center of Hengelo. While preserving its industrial heritage, the area is being transformed into a dynamic urban network for living and working, education and culture. The Industrieplein forms the link between this district and the old city center. Thousands of people pass the square every day on their way to school, work or the nearby music venue. Plenty of reason to convert the square into something more than a logistic hub.

But how do you design a square for so many different users and with such a large flow of visitors? Not only the usual functions such as logical routing, a Kiss & Ride, a taxi rank and bicycle parking had to be positioned on the square. A group of local skaters lobbied for years to get their own spot within the city center and the water authorities had a wish to restore the course of an old brook.

Creating space for all these users and functions was a complex puzzle. Public support was an important aim. That is why, at an early stage of the design process, various stakeholders were involved. All their interests and wishes have been carefully translated into a square designed as a composition of green shards. These green shards distinguish different functional zones and guide the pathways to and from the station entrance. The result is a well-arranged, safe square that simultaneously and harmoniously offers space to people’s, skate and traffic movements as well as calm and pleasant spots to rest and relax, meet and greet.

Almost 25% of the square consists of greenery. The chosen vegetation carefully takes into account the consequences of climate change. So perennials and trees are heat and drought resistant. The leaves of the trees offer shade, they break the sun light and diminish temperature and heat stress. Nectar bearing trees for pollinators and host plants for butterflies increase biodiversity. There is always something in bloom all year long.

One of the most innovative aspects of the Industrieplein is a new water course that links two existing streams. This new waterway has been realized by adapting an old sewer for clean water. Since the stream is low leveled, now and then the water appears on the square to dive again underneath street level a bit further on.

The presence of water is not only beautiful and inviting, it is also functional and sustainable. So in times of heavy rain the stream retains and drains water. The fluctuation of water levels also facilitates a wide variety of vegetation.

Ever since its opening, the Industrieplein is becoming the place to be for all skaters and BMX riders in the region and beyond. The natural integration of the skate park shows how collaboration and creativity results into a square for everyone: young and old, passers-by and users, pedestrians and traffic, water and greenery. In this sense, the Industrieplein not only connects two city area’s in Hengelo, but also its residents and visitors. 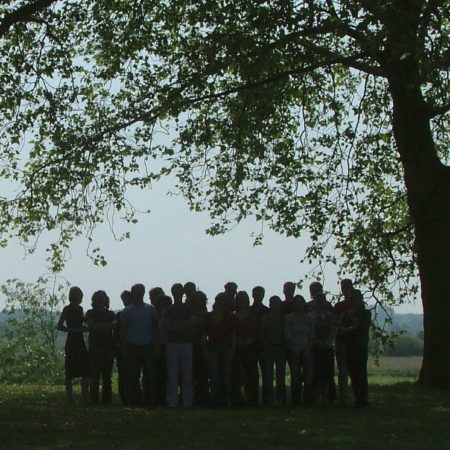