MIT’s Bexley Hall was a brick five-story hotel constructed on a filled marsh circa 1900. Located in what would later become the heart of campus, it was purchased by MIT in the 20’s and converted into a dormitory. It housed a vibrant artistic and creative community for decades prior to being demolished in 2015 due to structural issues, much to the dismay of the students. To replace the beloved domicile the landscape architects were commissioned to design an interim landscape which continues the creative tradition of MIT and Bexley Hall while providing a gateway to campus and urban park for both students and greater Cambridge community.

During demolition MIT chose to leave the existing building foundation in place for cost and permitting reasons. In addition to the structural and design challenges posed by the existing foundation, the removal of Bexley Hall would provide a direct line of site to Saarinen’s Chapel located directly behind the site. The Chapel landscape, while not formally credited, is alleged to be either influenced by or unofficially the work of Dan Kiley, as he was frequently collaborating with Saarinen during that time. To design an interim landscape within this context provided additional challenges: how to complement and respect the existing historic context while creating a unique and flexible open space suitable for a 21st century campus. 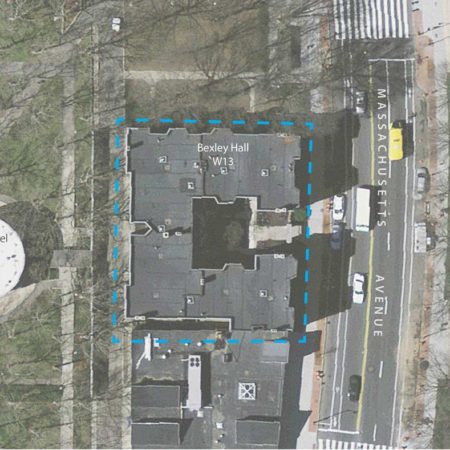 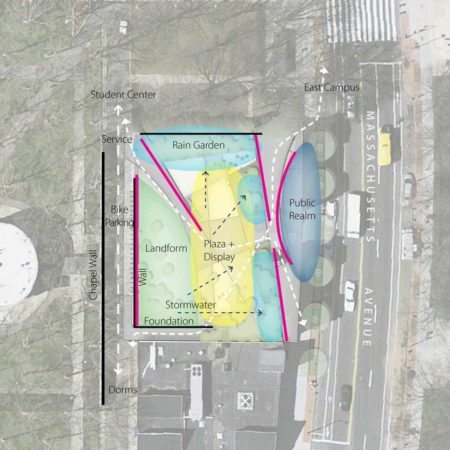 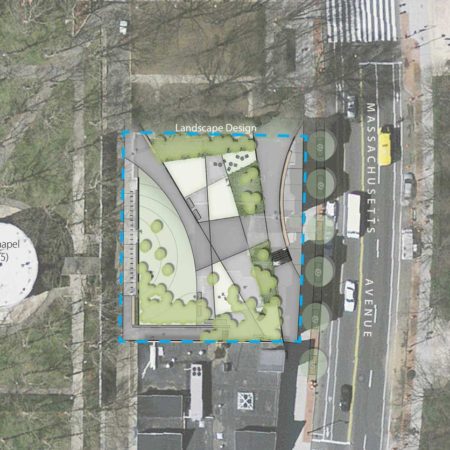 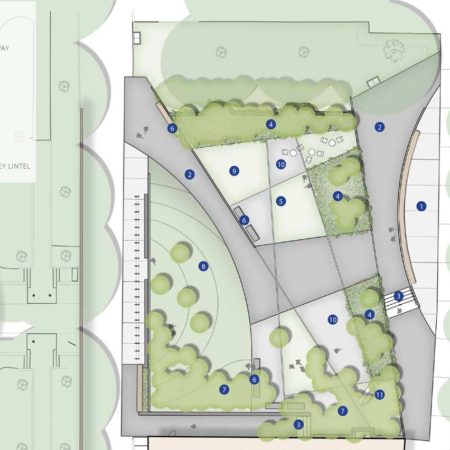 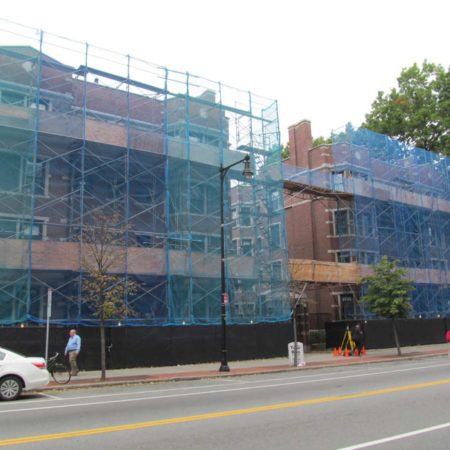 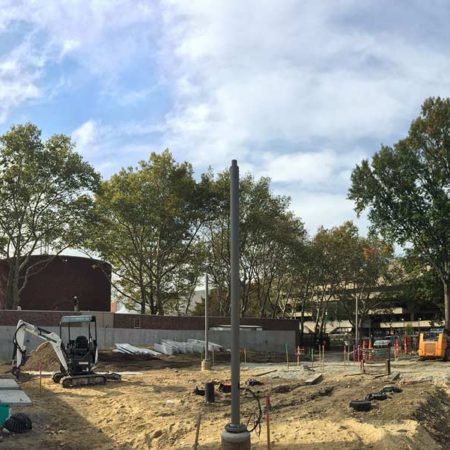 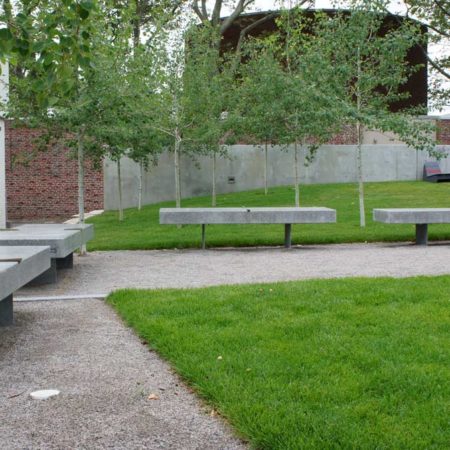 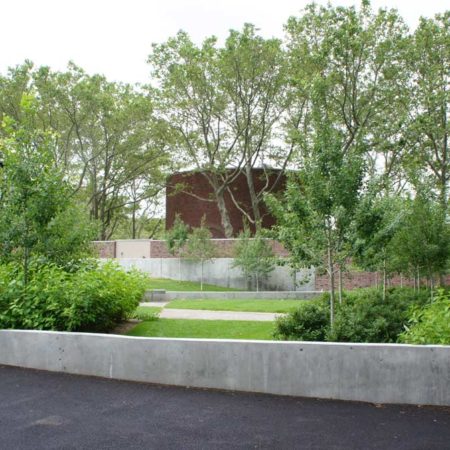 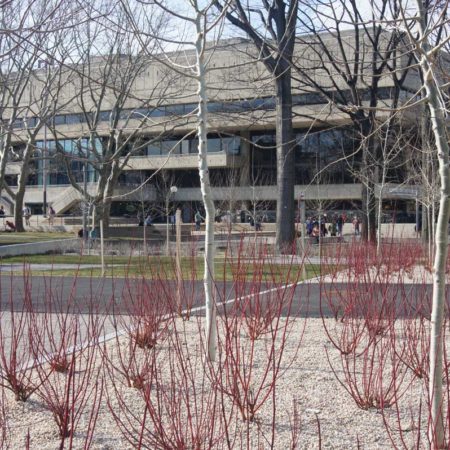 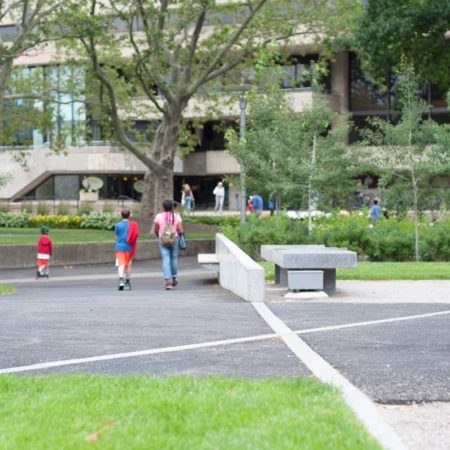 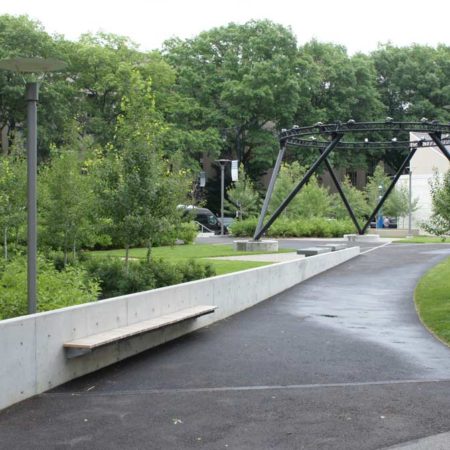 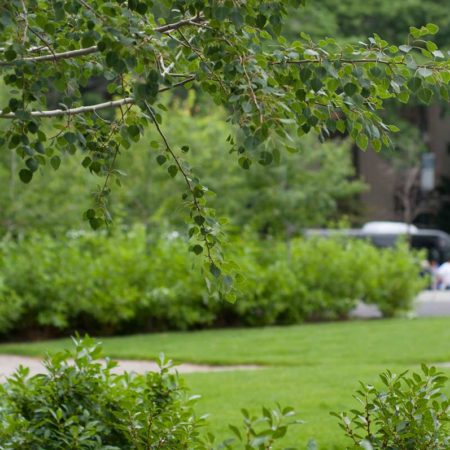 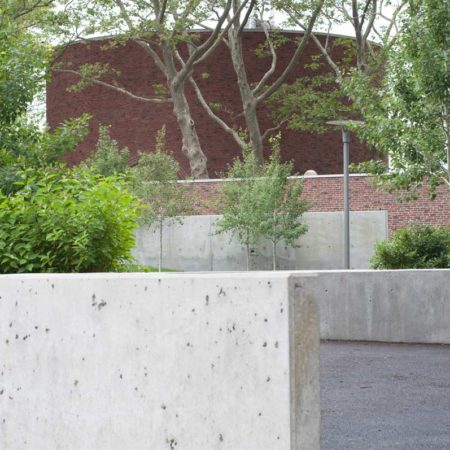 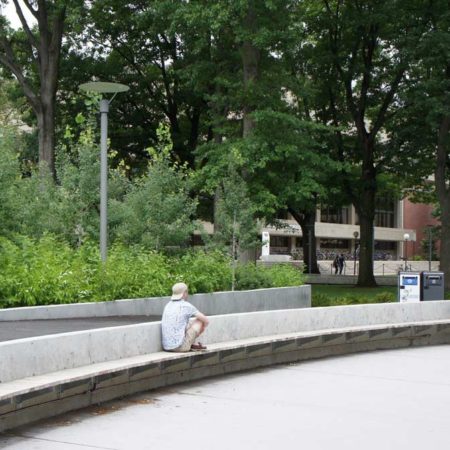 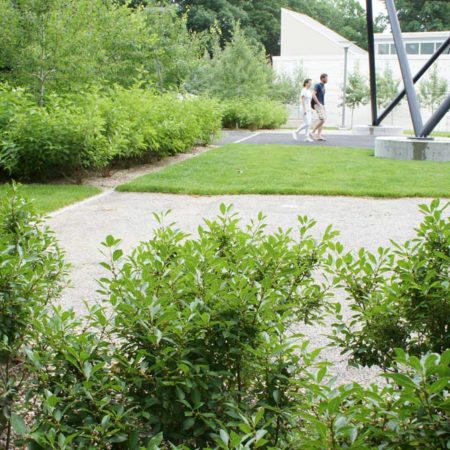 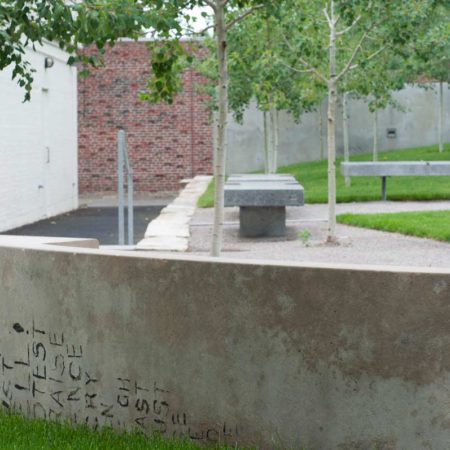 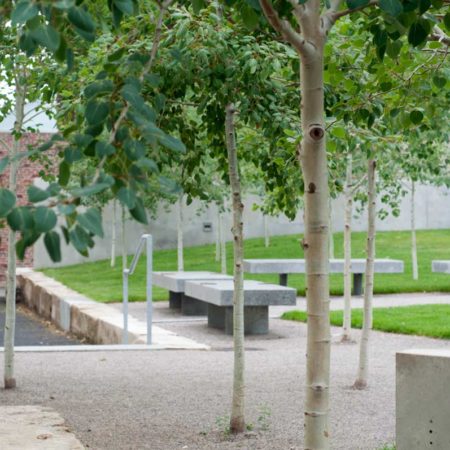 The goal for the Bexley site was to provide a dynamic and interactive landscape, inspired by the entrepreneurial spirit and ingenuity embodied by MIT. The design intent was to create park which engages users, inspires creativity, fosters interaction and serves as a medium for the campus to interact with the Cambridge community and public realm.

Referencing the history of fill on campus which created the adjacent Kresge Lawn, the existing foundation was used to create a plinth approximately 24” above the existing grade. This intermediate grade change was instrumental in creating a campus space that had a public streetscape presence yet clearly belonged to MIT. To create a visible but porous edge between campus and the public realm, an urban plaza was created at the streetscape anchored by an arcing wall with a cantilevered bench which accommodates heavy pedestrian use and a bus drop-off area.

The design incorporates universal access to a central plaza, flexible spaces for display of student works and areas for programmed events. A series of concrete walls create circulation patterns and retain grade along the edges of the park. Alternating panels of lawn and granular pavements provide flexible spaces for display of works from the architecture department as well as daily use for students and MIT guests. Contemporary urban furniture and fixed seating provide areas for gathering while the sloped lawn plane facilitates passive recreation and rest.

The landform and site grading direct stormwater toward densely planted rain gardens which manage all runoff on-site. The existing basement floor was removed to allow infiltration and a series of porous layers filter stormwater. Other sustainability measures include high efficiency LED lighting, repurposed site furnishings salvaged from other campus capital projects, and re-use of demolition materials as site fill.

In order to create the landform and maintain pedestrian circulation between the site and Chapel, an 8’-6” (3m) cast-in-place concrete wall was constructed at the back of the site. The Bexley wall was carefully studied in relation to the existing brick wall with the intention of creating a layered landscape in dialogue with the Chapel. The Chapel wall is visible behind the Bexley wall, which also acts as a guardrail while on the landform. Along the pedestrian allee behind the wall, bike racks and lighting were added and a remnant of the existing foundation was transformed into a raised planter and seating.

The project has a simple palette of asphalt, lawn and aggregate pavements, specifically selected and designed for low cost installation, ease of maintenance and simplified removal when the time comes for the site to be redeveloped. The interim landscape is anticipated to remain in place for 5-7 years while the campus considers long-term plans for the site