To shape the future development and remind the history of the waterfront along the downstream of the Yangtze River were the initial design intents of the Jiangxinzhou Park. As a part of the project for the Nanjing Ecological High-Tech Island, the Park was designed to connect an island in the Yangtze River to the mainland. A series of terraced grass platforms was designed to resemble the native grass land on the side of the river, and to purify the run-off rainwater from the land. At the entry of the park, the Metasequoia glyptostroboides were planted along the street, which reminds the unique scene of the original cross-island road by the natives of the island. In the park, a series the structures and playgrounds, a sightseeing bridge, children’s playgrounds, extreme sports field and running track, were carefully designed to transfer the river bank that originally is only functioned for flood control to a dynamic and people-oriented community park. The park also brings business opportunities to the surrounding commercial and tourism to the island. 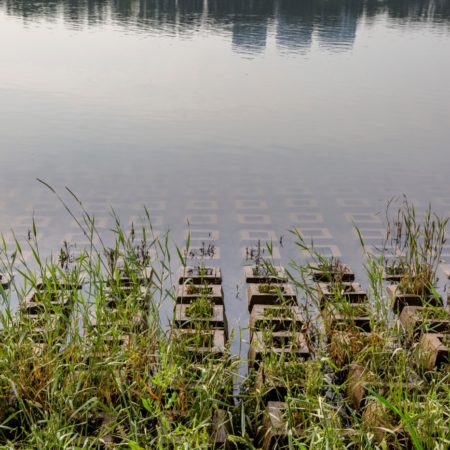 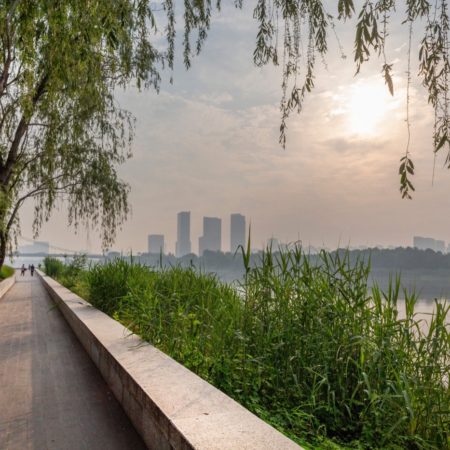 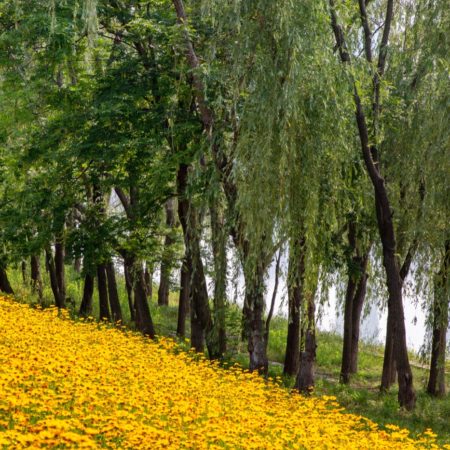 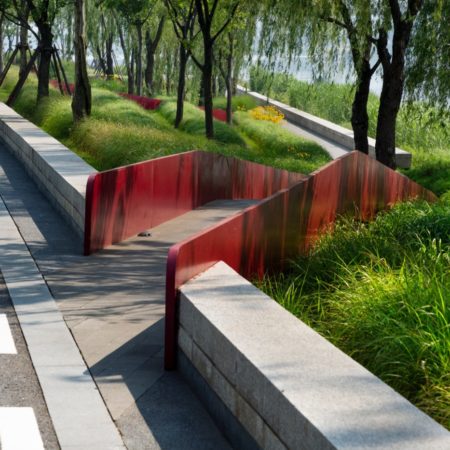 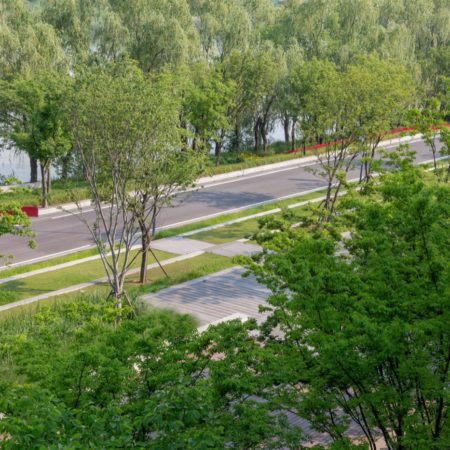 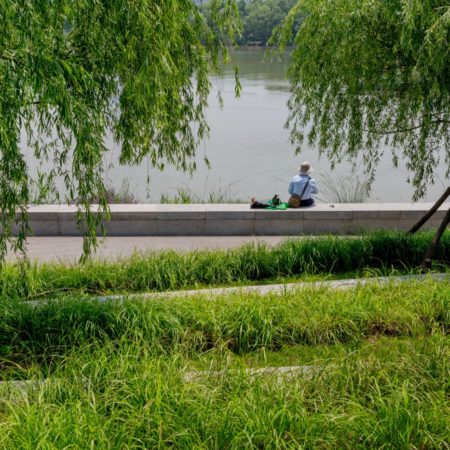 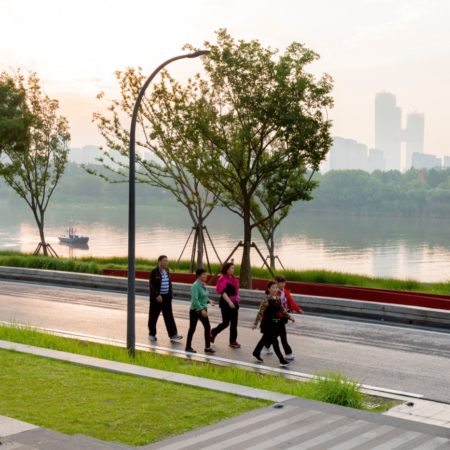 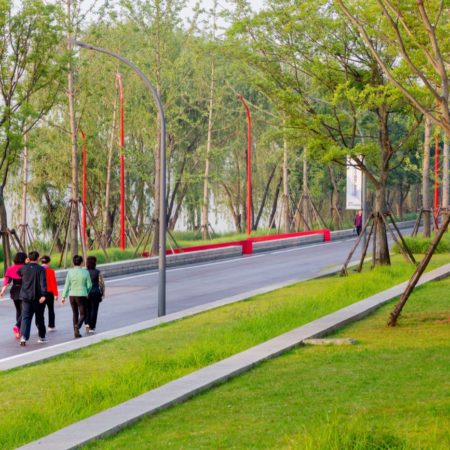 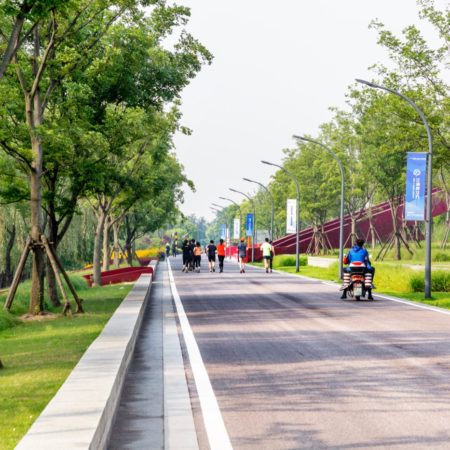 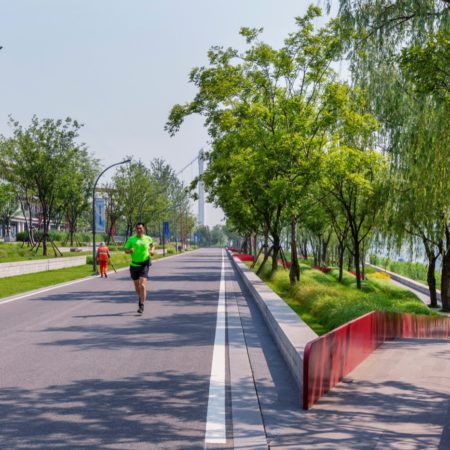 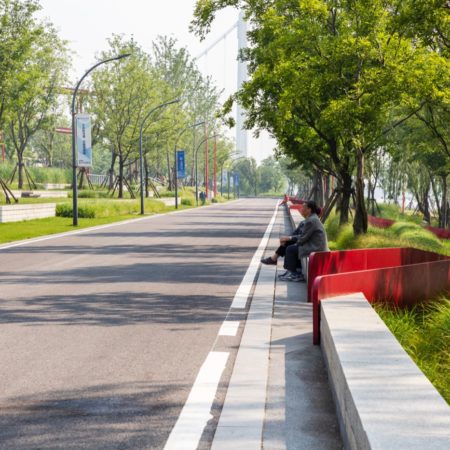 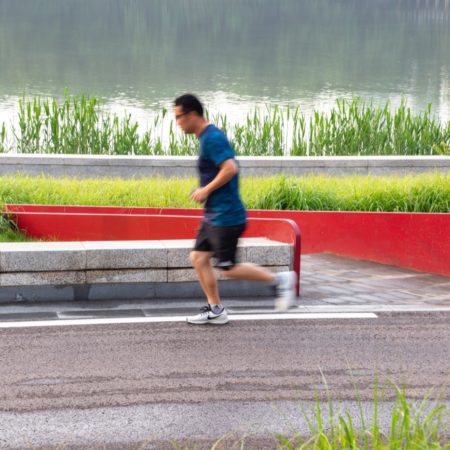 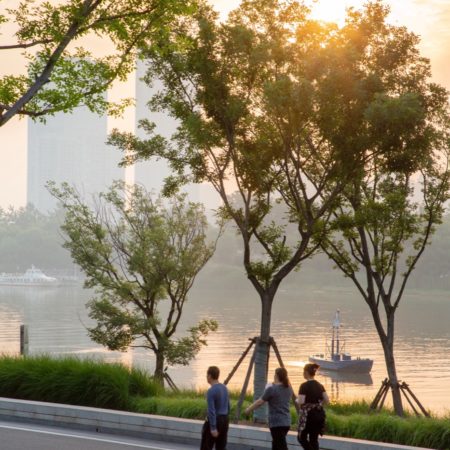 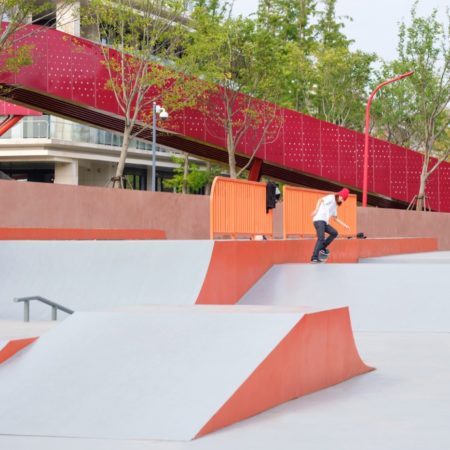 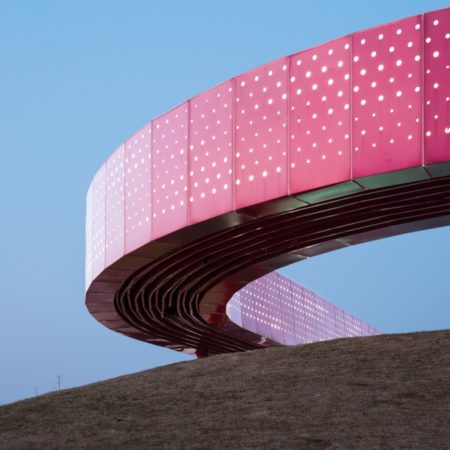 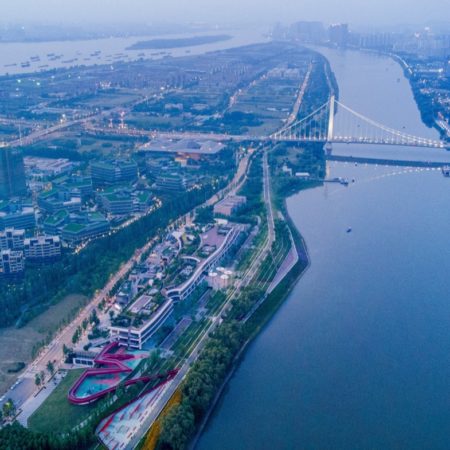 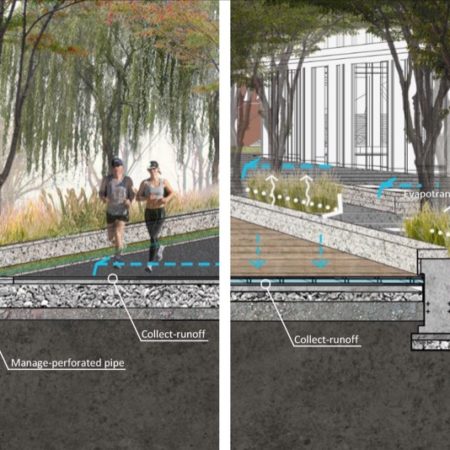 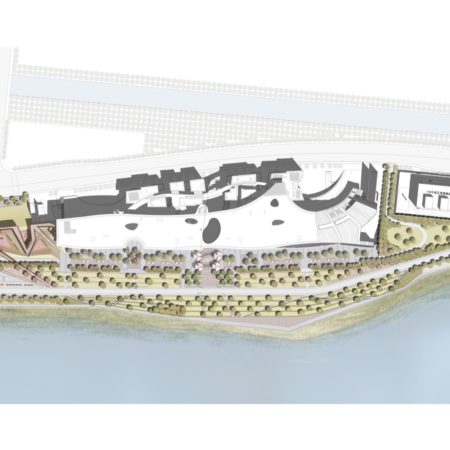 Located on the eastside of Jiangxinzhou Island in Nanjing, China, the Jiangxinzhou Park occupies the middle part of the riverbank along the Yangtze River and faces the downtown of Nanjing on the other side of the river.

Jiangxinzhou Island is a typical shoal in the Yangtze River formed by the impact of the water flow and sedimentation. This geographic phenomenal became significant in Song Dynasty, approximately 960 AD. The tidal flat of the island has naturally evolved into a landscape of willows and grass. The concept of the design is to respect this natural and ecological context and sustain it. Through the landscape architectural design, the park also conveys the rich history of the island into the contemporary daily life. Through preserving all native willows along the river on site and replanting a number of new ones, the design created a continuous belt of willow grove. The design also incorporated Miscanthus sinensis cv., Phragmites communis, Cortaderia selloana‘Pumila’, Pennisetum alopecuroides into the terraced platforms. The design is a response to the slopping topography of the riverbank and a reminder of the history of Jiangxinzhou Island.

Another original cultural symbol at Jiangxinzhou is the 30,000 tall Metasequoia glyptostroboides on the both sides of the 15-km long cross-island road. The scene has existed for longer than 40 years. In 1978, the residents on the island used the gravels that was made by crushing the local rocks to pave the cross-island path. The path is the foundation of today’s cross-island road. To pay the respect to this pivotal moment in the history of Jiangxinzhou’s development, the design created the Metasequoia glyptostroboides groves on the both side of the road at the entry of the park.

The design also means to create a contemporary, sustainable and environmentally responsive landscape for the residents and the island.

The foundation of the site is located on the top of an original flood control dam. The dam was merely designed for the safety of agriculture on the island. The dam was a steeply slopped retaining wall that was constructed with riprap, grass paver and grid ridge structure. The design of the park is based on a series of simple and easy-to-operate strategies that addresses two major deficiencies of the existing dam.

1. Ecological Defect
The existing dam was a singular structure that cast damages to the ecology of the waterfront. First of all, the construction of the surface kept the various species in the waterfront from mixing; secondly, the high-density concrete surface accelerated the runoff directly into the river. The existing dam offered very low capacity to regulate the storm runoff. The deficiency had cast great threat to the water quality of the Yangtze River.

Accordingly, the design of the park incorporated several methods. For the surface of the slope of the dam, the existing grass pavers were used to lift the planting soil to create a new layer for vegetation restoration. In addition, taking the existing grid ridge structure as the foundation, the new terraced platforms were built upon. The lawn and the common local aquatic and water tolerated vegetation were planted on the platforms to prevent soil erosion. All these together, a system that can retain and purify water is established. For an additional measure, the Metasequoia glyptostroboides groves were extended to the both sides of the commercial buildings on the ridge of the dam, which is also one of the very common environmental characters on the island.

FROM FLOOD CONTROL TO DAILY LIFE

2. Functional Defect
The singular structure of the dam was no longer able to accommodate the growing and new needs of the new residents on the island, for example, the steep slope (1.2.5 to 1/3) fitted no condition for human activities. The terraced platforms were built as the solution. The north-south terraced platforms with different features were designed. The steep slope was broken down to three tiers – a riverside walkway along the river; a tier of water tolerated vegetation in the middle; and a tier on the top as the extension of the commercial space. On the east-west, steps and ramps were built to connect the commercial space on the top to the riverside promenade. A granite stone wall was built on the existing grid rigid structure to separate the promenade from the riprap.

The existing flood control channel around the island is planned to provide a track for future round-the-island bicycle and marathon events. The stone steps and planters on the both sides that are used for resting and sightseeing could be utilized to provide approximately 8,5000 seats during the racing events. On the southside of the grandstand, a sport field is introduced for extreme cycling.

The commercial space is divided into two layers from east to west with two different featuring materials – granite stone and recycled wood. It separates the pedestrian sidewalk from the area with furniture. A group of four-leaf clover sculptures and an interactive dry fountain created a central point for the commercial space. Extended from the second floor of the building, a bridge in elegant and geometrical form was built. It offers vantage points to see the river and leads the people from the building to overpass the children’s playgrounds and the extreme mountain bike field to the riverside. On the commercial plazas and terraced platforms, tall Zelkova serrata (Thunb.) Makino, Celtis sinensis Pers., Sapium sebiferum (L.) Roxb. and Ulmus parvifolia Jacq are planted to provide much needed shades during the hot summer season in Nanjing.

Since the completion of the 24-km round-the-island track, the children’s playground and the extreme sport fields, Jiangxinzhou Island has become much more popular and dynamic. It is an important momentum for the further improvement for the island. The opening of the park has created considerable employment opportunities, which has increased the value of the land substantially. In 2019, Jingxinzhou’s housing value increased by 168% which is 79% higher than the average in Nanjing.

As the first phase of the Ecological High-Tech Island, the Jiangxinzhou Park project has shown positive impact throughout the island and even to Nanjing city. The project has not only raised the public’s understanding of the environmental culture on the Yangtze River, but also presented the important role of landscape architecture in large scale environmental projects. The project will bring new opportunities for the future development in the local area, create new activities for the public, and increase awareness of water conservation and ecological protection.