Kampung Admiralty was conceived as an integrated community hub for the elderly in a high-density suburban neighbourhood. Drawing inspiration from the self-sufficiency of traditional villages, it stacks retail amenities and a medical centre with apartments and social spaces within a single site. These diverse programs are woven together through shared landscapes, from outdoor recreational spaces, rain gardens and the retention pond to the community farm. It is a prototype for integrating blue-green infrastructure with built form, while interpreting local Singaporean kampung culture and traditions to redefine active aging for the 21st century. 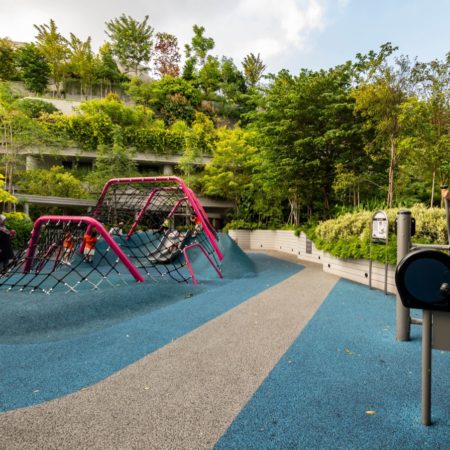 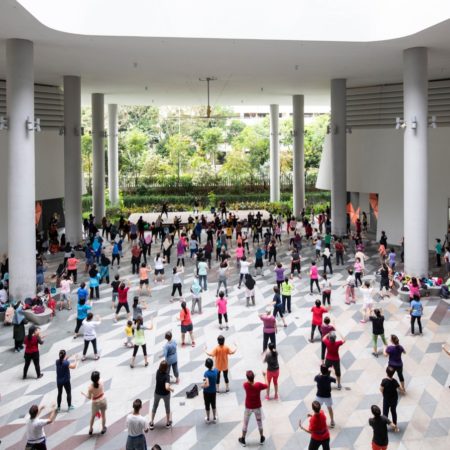 Life in the kampung was lived outdoors – on the front porch, in the garden and the forest. This communal living fostered community spirit, as neighbours interacted daily and supported each other in times of need. As Singaporeans moved from villages to high-rises in the 1960s, void decks were used to replace these shared spaces; but the scale had shifted, and the connection to nature and food production was lost. Kampung Admiralty restores these shared spaces in a modern context. Throughout their day, residents are immersed in nature. This improves mental health and encourages physical activity, while reducing the risk of social isolation. Benches along common corridors enable informal interactions; residents can also work together in the community farm, exercise in the lush rooftop gardens, or gather for events in the public plaza. There is space for residents to host friends and family, and the community farm enables residents to reconnect with their culinary heritage, and to pass on knowledge of local produce and traditional dishes to the next generation.

Central to the modern interpretation of the kampung is the integration of blue-green infrastructure throughout the built form. In total, greenery covers 53% of the building plot area, achieving 100% green replacement. More than just decorative, this manages the site’s natural resources, enabling the building to act as a landscape. Water is conserved through harvesting, cleansing and recycling rainwater. Vegetated filters, rain chains and the rain garden collect and filter stormwater runoff before sending it to the harvesting tank; from here it is redistributed through the building for irrigation. At the ground floor, the cleansing biotope and eco-pond collect and filter surface runoff to irrigate grade-level landscaping. The lush greenery, open water and contiguous canopy and shading also help to bring down surface temperatures on site. This creates not only pleasant outdoor spaces in the tropical heat, but also an efficient and sustainable development.

Perhaps the most unusual impact of the project extends far beyond the site. Kampung Admiralty has become a biodiversity hotspot, transforming the ecological value of the neighbourhood. The diverse planting palette, including shrubs and trees providing fruit and nectar, attract a wide range of species. Water features increase this diversity through providing alternative habitats and a source of water. A biodiversity audit conducted from July-September 2018 found a total of 50 difference species, including 19 bird species and 22 insect species. Two species of birds were found roosting on the site; and uncommon species such as the oriental magpie-robin and pied triller were spotted.

Singapore is small, and densely populated. The island has transformed its urban landscape within a single generation through far-sighted urban planning and design, continually developing and testing innovative urban models. As such, Kampung Admiralty is a project driven by its context, a crucial leap forward in the journey towards the sustainable, ecological cities of the future. 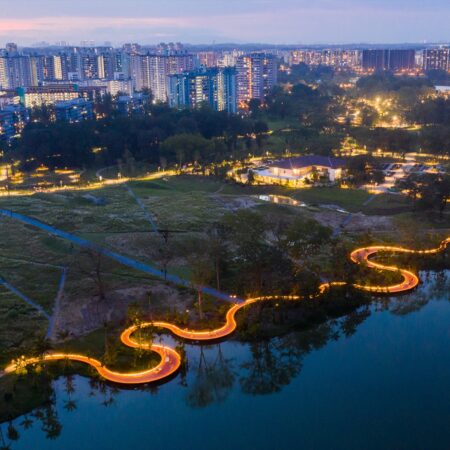