BRIEF BACKGROUND
Beirut the capital city of Lebanon lacks public and green spaces. if they exist, they would mostly belong to private institutions like high end real estate developers, universities and religious houses. The few public gardens present in the city were abandoned during the war and till today lack maintenance and care.

The municipality approached us in 2011 to offer our services in designing a public garden in Beirut. Back then such initiatives were very few and rare. The proposed site is in the Karantina area, a neighborhood which underwent intense political conflicts during the civil war to the extent that until now, 27 years later, many residents did not recover. Some old militia heads still have the same power over their quarters which resulted into a divided neighborhood between Christians and Muslim until the present day.

This opportunity is a rare occasion to portray how designing a public space can impact the communities inhabiting it and create a peaceful meeting space and play. 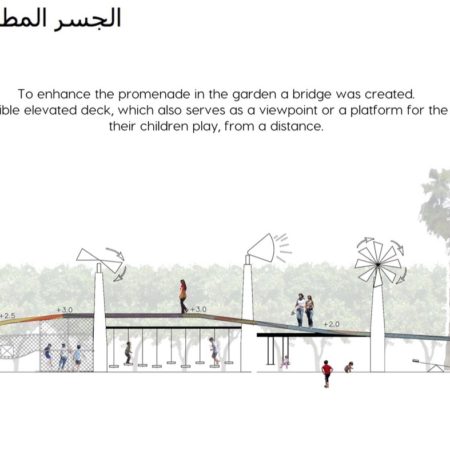 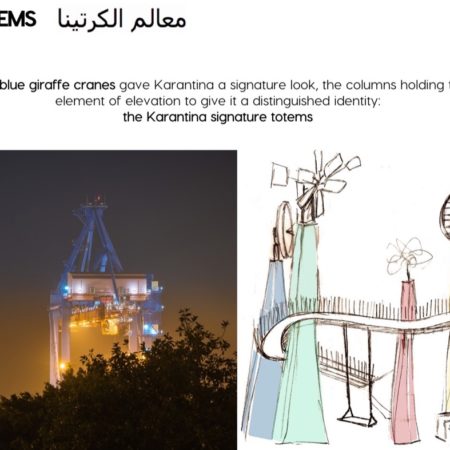 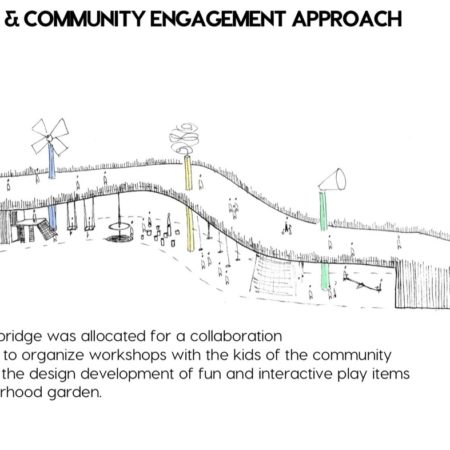 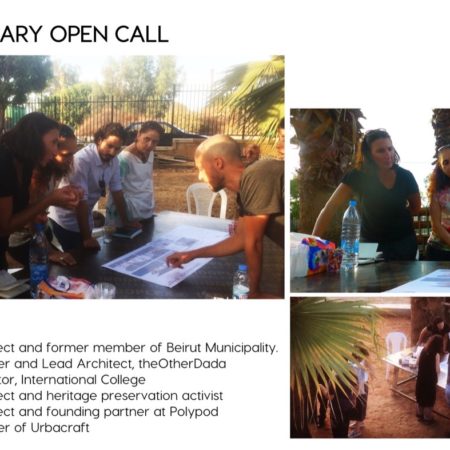 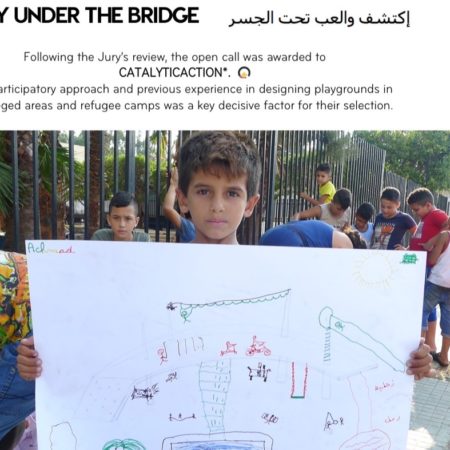 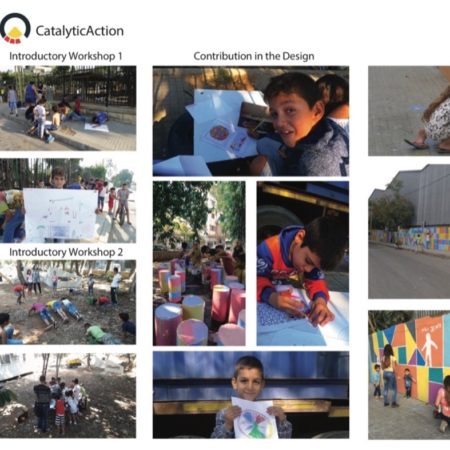 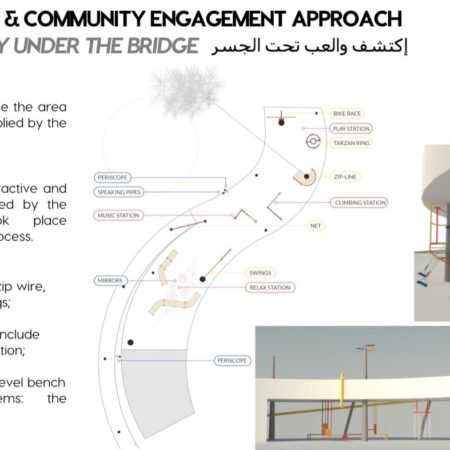 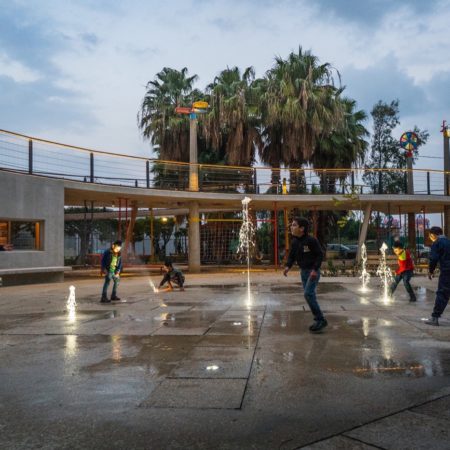 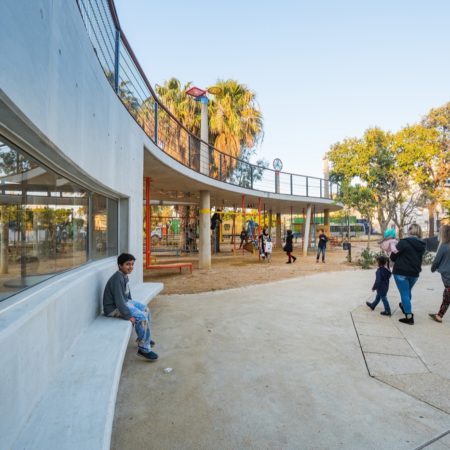 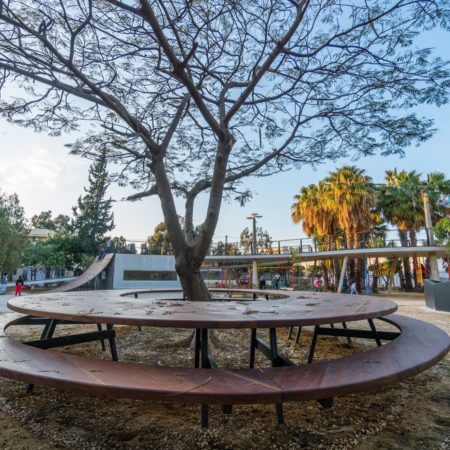 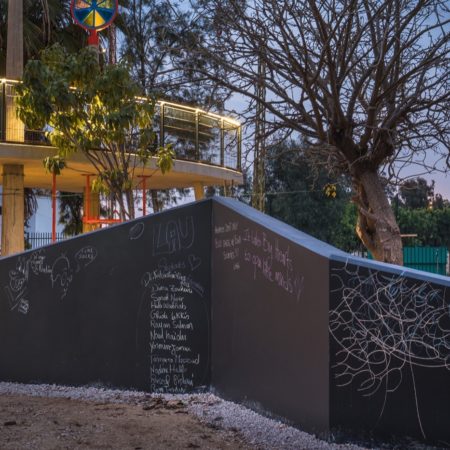 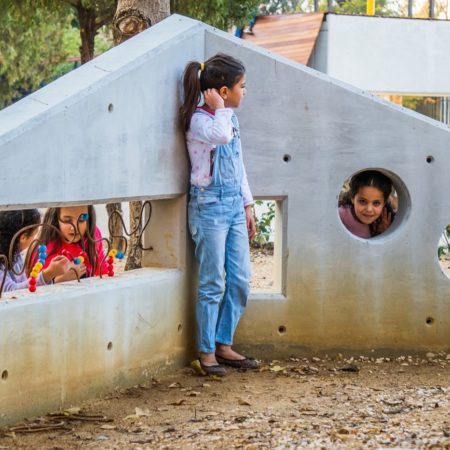 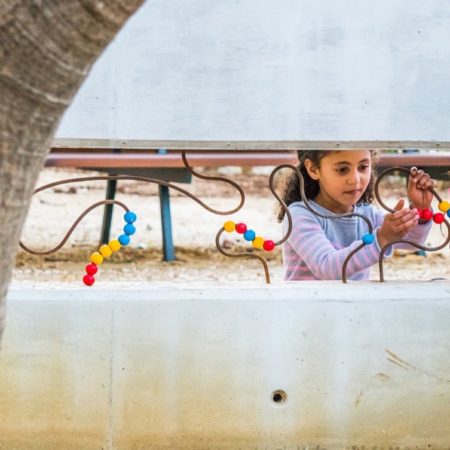 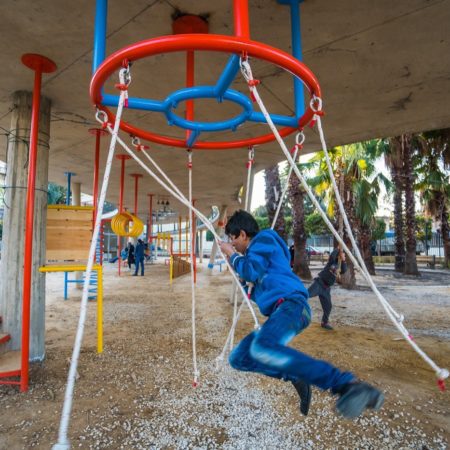 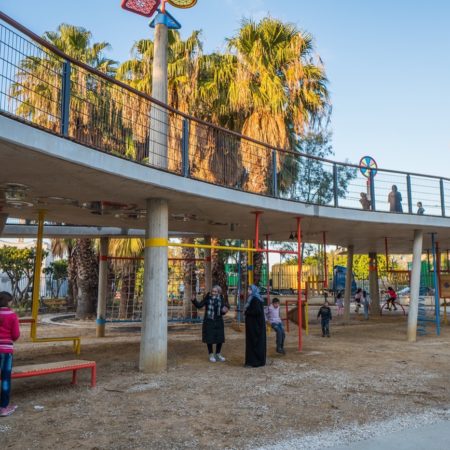 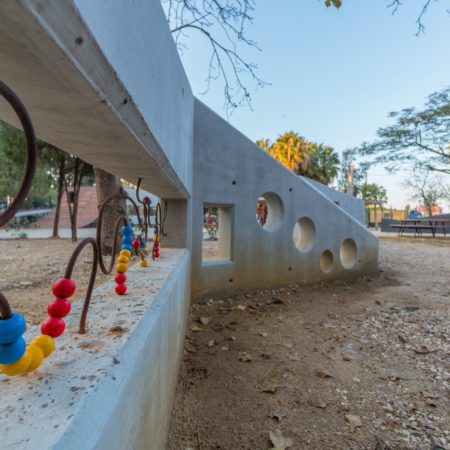 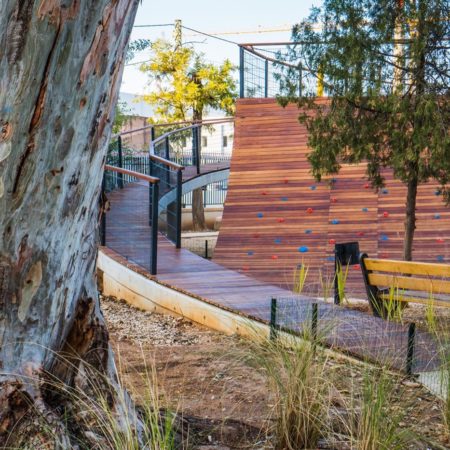 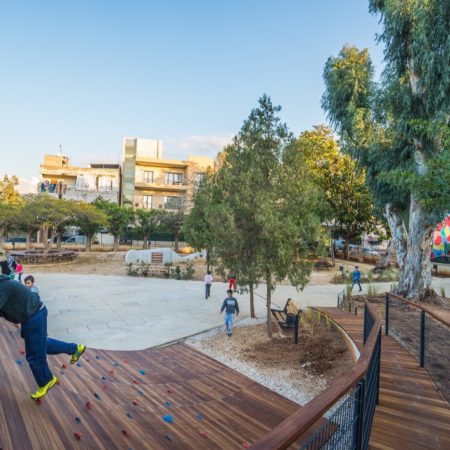 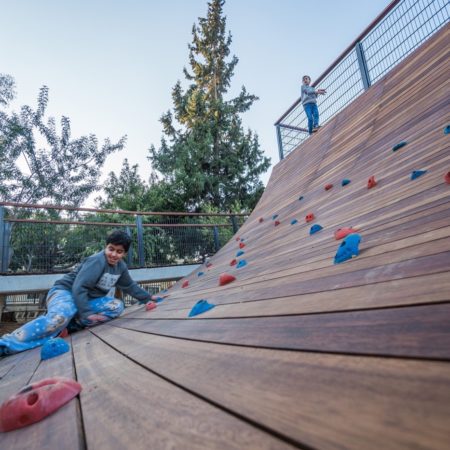 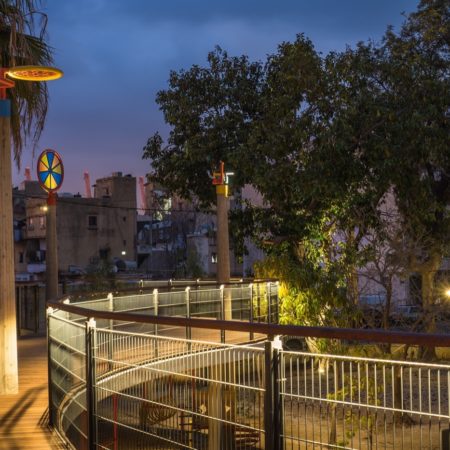 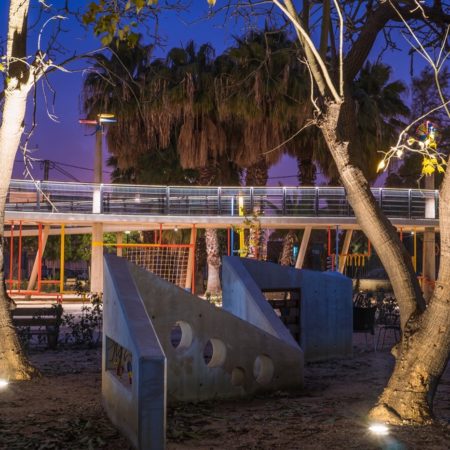 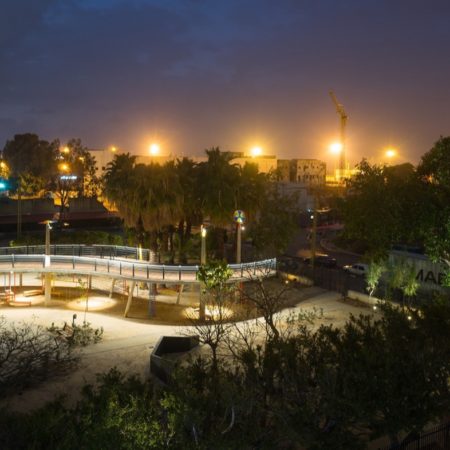 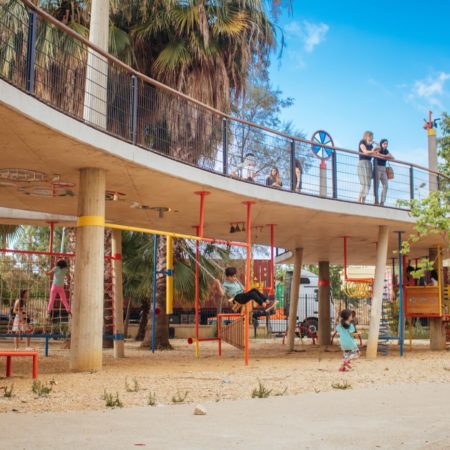 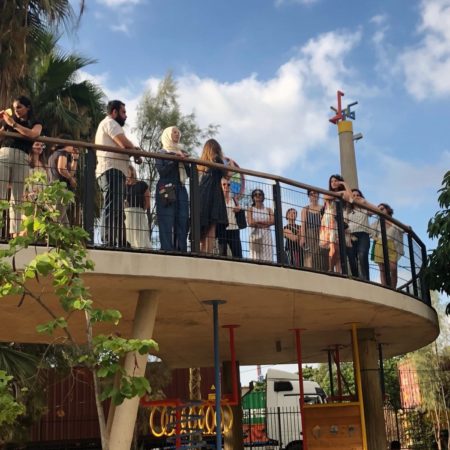 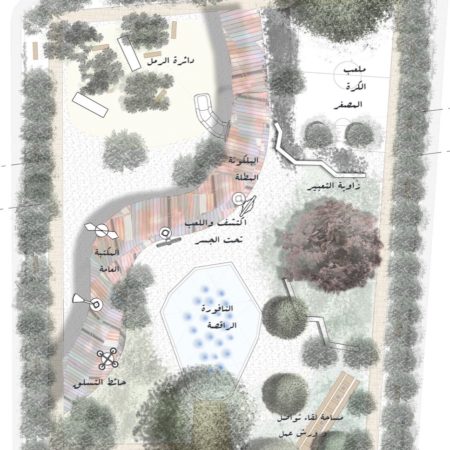 DIRECT CONTEXT
Karantina is a complex neighborhood, tainted with an unfortunate historical past. Located at the outskirts of Beirut, Lebanon, Karantina—originally the place of enforced isolation right at the entry from the Beirut port— became a refuge for the minorities and the displaced, and until today is rich with communities from diverse ethnic and low income backgrounds (Muslims, Christians, Armenians, Arab al Maslakh). Mainly an industrial district, Karantina houses a dense and crowded residential fabric alongside a slaughterhouse and Sukomi, the recycling treatment plant of Sukleen (leading waste management company in Lebanon).

The recent closure of the slaughterhouse, as well as the wide and affordable spaces on offer are attracting emerging artists, developers and creative people, slowly starting a gentrification process. The neighborhood has been witnessing a rise in art galleries, major developments, as well as a nightlife scene all of which are subsequently impacting its socio-economic status.

The site itself was an abandoned public garden at the heart of Karantina with lush clumps of tall trees forming a charming oasis. Despite our first instinct to respect the memory of the garden with its original architectural elements, we decided to go beyond the nostalgia, and instead, transform the space to become a platform for reconciliation between past and present, enabling grounds of encounter between different communities and cultures, and generations.

APPROACH
Our role as landscape architects was to create a garden that’s not only aesthetically but impactful with a strong sense of community engagement and integration of the residents in the process of the design. The aim was to build within the users a sense of ownership in order to ensure a successful continuity of the project beyond its implementation.

Our dialogue with the community made it clear that children were to be at the forefront of this project: their play rituals and dynamics became our drive and it became clear to us that in order to achieve this harmonious reconciliation, this space had to concretize as a play type of garden.

While designing the site, we allocated an area for a collaboration with other teams to organize workshops with the kids of the community and engage them in the design development of fun and interactive play items to their new neighborhood garden.
For that we collaborated with Tandem works and launched an open call inviting artists, designers, architects, sociologists and urban planners to develop proposals for a playful and interactive installation. A carefully selected jury was selected and following their review, the open call was awarded to CatalyticAction. Their participatory approach and previous experience in executing playgrounds in unprivileged areas and refugee camps was a key decisive factor for their selection.
Catalytic Action’s installation attempts to target all generations through community projects, arranging weekly workshops with the children from the neighborhood and collaborating with three local groups: The chain effect, Recycle Lebanon and Urbin Pins.
The introductory workshops carried out included a series of drawing and model making to introduce the children to the project and engage them in the initial design process.

DESIGN
The proposed design introduced a new type of public gardens in Beirut: a Play Garden. It aims at combining art, play, and education; while integrating design functions with its existing mature trees. This resulted in a garden that is rich in activities yet volatile in space.

The areas were already defined by the clusters of mature trees and the proposed design links those areas together and propose functions that were suggested and inspired by the users themselves.
1- One of the focal elements in the garden is the introduction of a new built structure: The power bridge which enhances the promenade in the garden and acts as an open flexible elevated deck. The bridge also serves as a viewpoint or a platform for the parents to overlook their children play, from a distance.
2- Just as the tall red and blue ‘giraffe cranes’ gave Karantina a signature look; the columns holding the bridge mimic the element of elevation and are meant to give the garden a distinguished identity: the Karantina signature totems.
3- The four areas implied by the location of the four totems under and around the bridge were devoted to the open call. The play items proposed by CatalyticAction in each area were informed by the workshops that took place throughout the design process. The play items include: active spaces such as the zip wire, climbing wall and swings; Music interactive games such as the xylophone and bells station; Relaxing space such as the multilevel bench; Exploratory play items such as the periscope and mirrors.
4- The existing elevated and dry water feature was transformed into a central Joke Fountain, that when activated in the summer, becomes a fun, dynamic and refreshing element in the garden, and doubles up as an open flexible piazza in the winter.
5- An oval shaped table and benches are built around the specimen tree that used to stand alone on the right side of the garden and serves as a picnic or workshop area.
6- Embracing the workshop area from the two ends is an expression wall that serves as a scoreboard for the mini court area, and a play wall with embedded play items.
7- A community Library is an educational corner that exposes the users to an unlimited source of books in different languages and educational board games
8- Other areas include a climbing wall, picnic tables under the shade for parents and elderly to enjoy the garden, small multifunctional play court that was kept as is, a play wall that is interactive for kids and a sand pit under the cluster of palms that is devoted to toddlers.

CONCLUSION
In our opinion, as landscape architects the collaborative approach to designing this specific public site with all its complexities is what makes of it a successful one. The community integration process in the analysis, workshops and design phases built a sense of ownership within the users, raised awareness on their right to public space, taughtt them how to express themselves and most importantly how to interact with different teams.
This is crucial to the continuity of the garden.

Name of the project: Karantina play garden: A space for encounters

Role of the entrant in the project: Landscape architect & consultant

Other design firms involved:
Contractor: Bet A Bat
Organizers of the open call for artists: TandemWorks
Winners of the design development and execution of the play items under the bridge: CatalyticAction
Community engagement workshops: CatalyticAction in collaboration with the chain effect, Recycle Lebanon and Urban Pins.
Sub-consultants: Rodolphe Matar for structural, Rabih Nahas for MEP, Watermaster for the water feature, DIB for lighting, ASSABIL for the library space & Greenstudios
Client and funder: Universite Saint Joseph (private funding)