Toronto’s Kew Gardens is a bucolic Victorian park that extends south from the Beach neighbourhood’s busy retail main street (Queen Street East) to the Lake Ontario shore. The City of Toronto and the local Business Improvement Area (BIA) commissioned the Kew Gardens Streetscape to negotiate the tricky – and previously jarring – transition between retail frontages and the park. This landscape creates two new loci for large-scale community events along the park’s street edge, connected by an expanded sidewalk with a pattern that fades out irregularly to the south, evoking the shoreline. Intertwining new and existing elements, the accessibility-enhancing Kew Gardens Streetscape creates a cohesive and versatile zone for community gathering.

Kew Gardens is the only remaining 19th-century legacy “amusement park” in the east-end Toronto neighbourhood known as The Beach. Joseph Williams, Kew’s founder, transformed his farm on the Lake Ontario shore into a tourist destination in 1879. Competing with nearby rival destinations offering rides, gambling, and liquor, Williams proposed gentler entertainment – swimming, boating, tennis, and lawn bowling, in a picturesque park and beach setting. He envisioned his Kew – which he named after Kew Gardens in London – as “a place of innocent amusement.” In 1907 he sold the property, including its Victorian chinoiserie bandshell and his house, to the City. 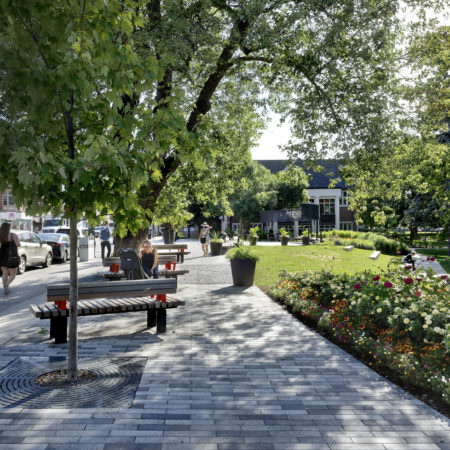 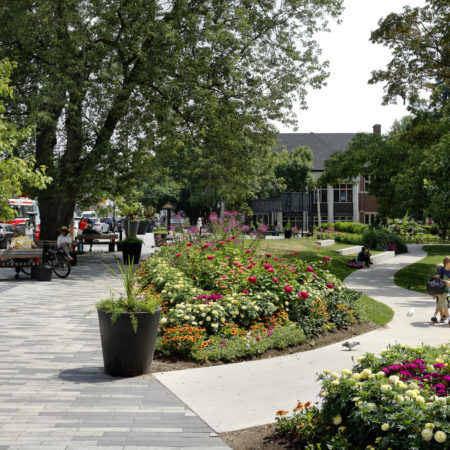 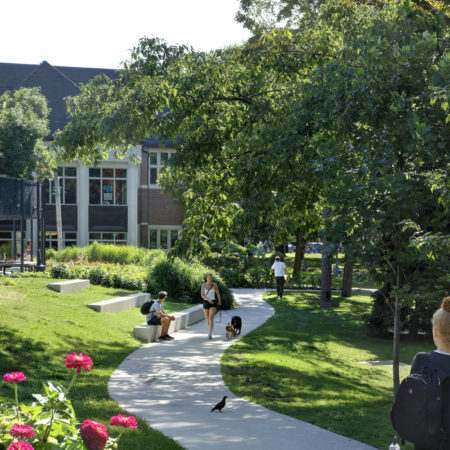 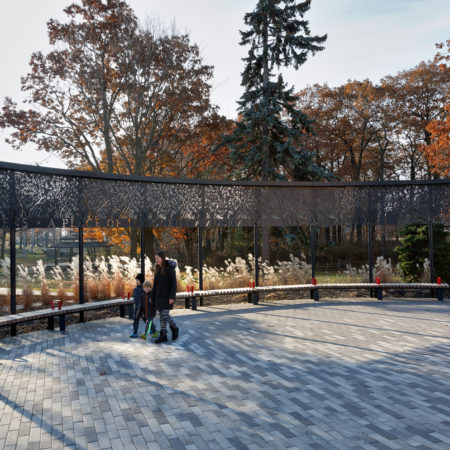 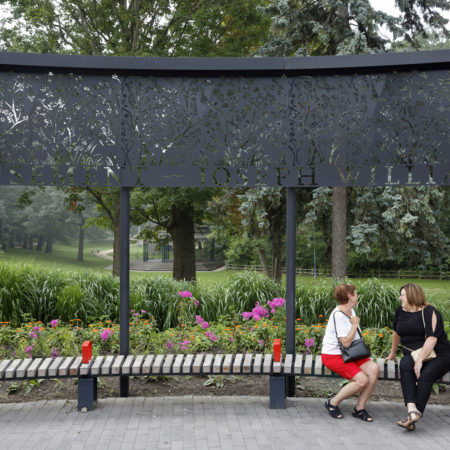 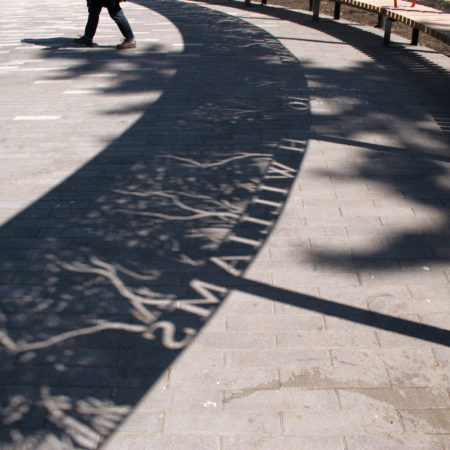 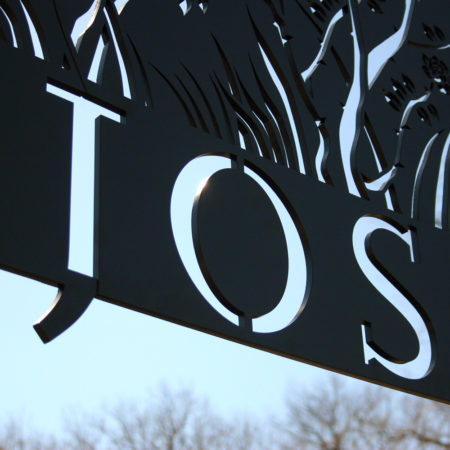 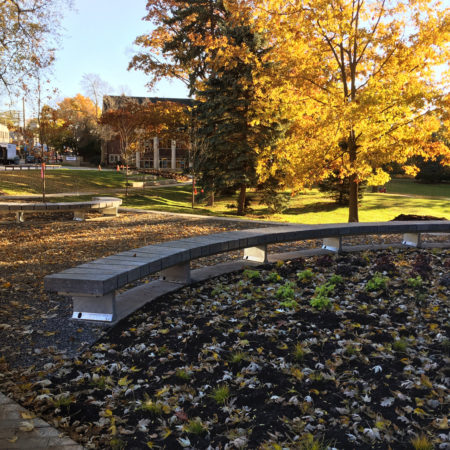 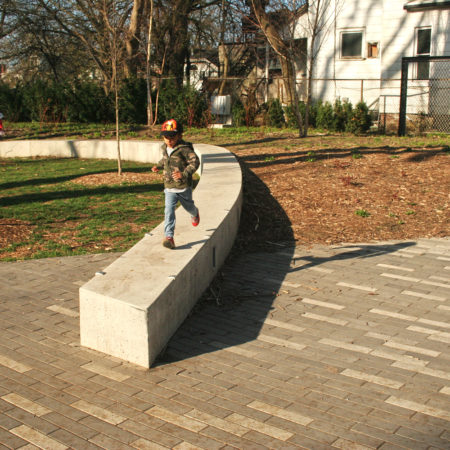 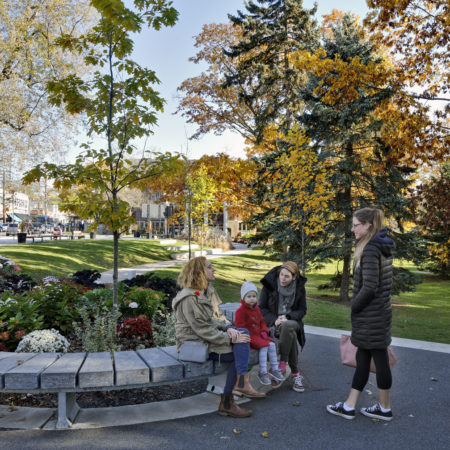 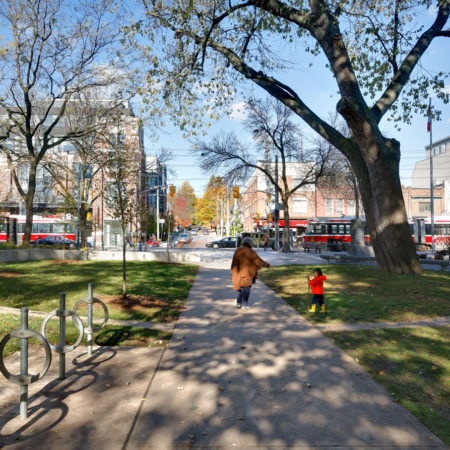 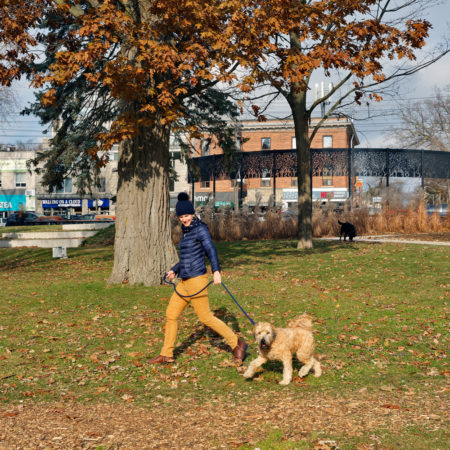 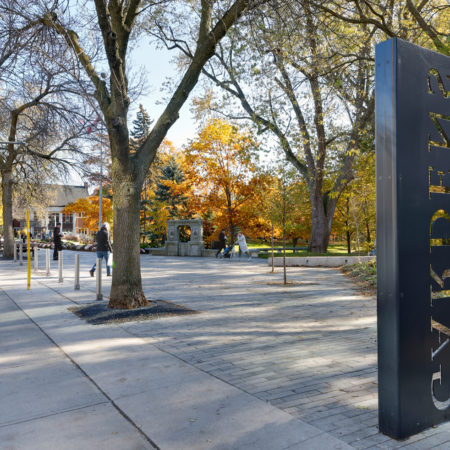 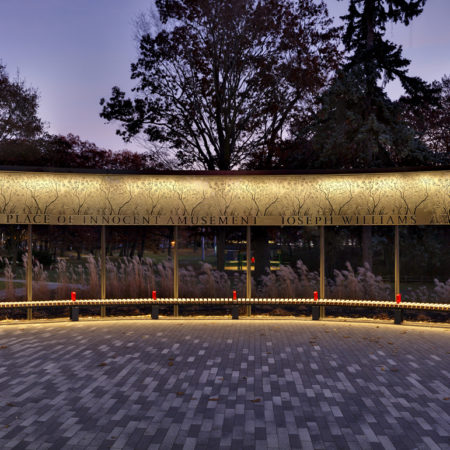 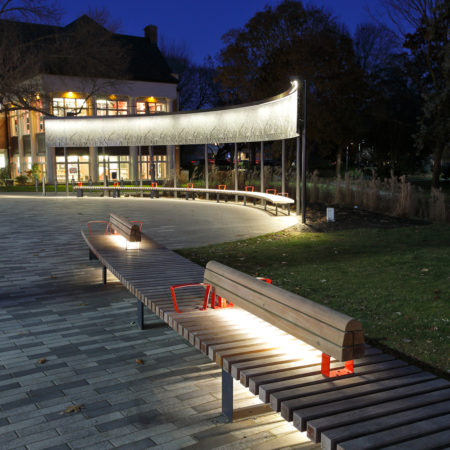 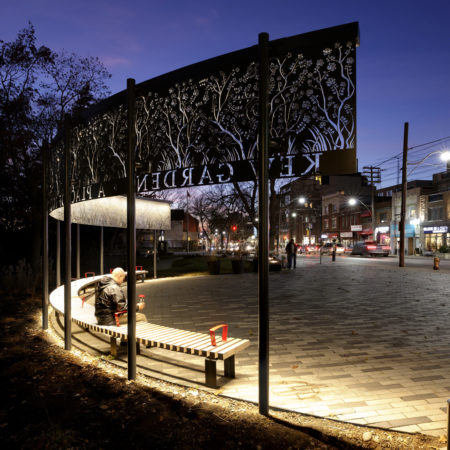 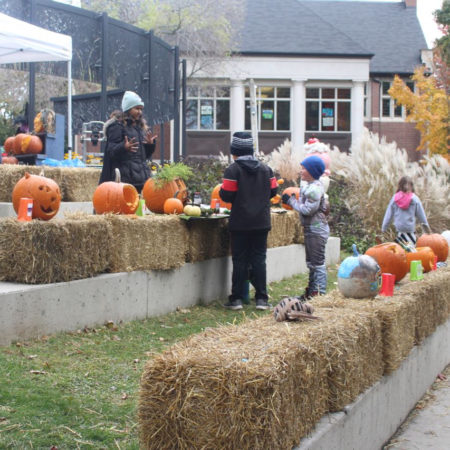 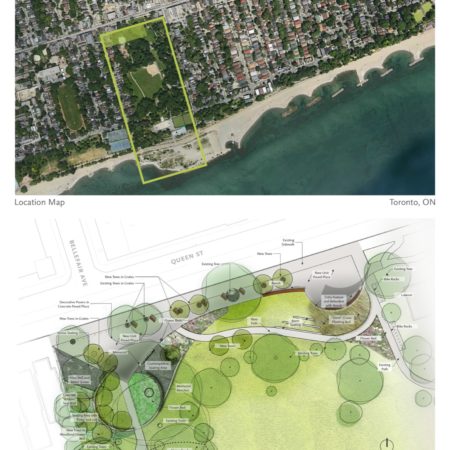 Over the decades following Kew’s founding, Queen Street at the park’s northern edge became one of Toronto’s most important east-west commercial streets. Although the park interior was much used, both on a regular basis and for special events such as a jazz festival, Kew Gardens’ street edge met the retail frontages abruptly and was not suitable for hosting community events. The City’s priorities included making the park more accessible and improving the park edge’s capacity to host small and large community gatherings. The annual Remembrance Day service held at the historic cenotaph near Kew’s northwest corner was a particular concern, in that many of its more than 1,000 attendees did not have adequate space to sit or stand, and tended to spill out into the street. The BIA also wanted better space for hosting a wide range of community events along the park’s street edge. Having an east/west events zone along Queen would encourage area residents and visitors to access the local businesses of the BIA’s members, as opposed to viewing the park as simply a route south to the waterfront.

At the east, adjacent to the local library, is a new plaza, framed by a dune inspired planting of grasses and a water jet-cut screen evoking the park’s 19th-century origins. Raised high, the screen frames community events held on the plaza and provides continuous framed views into and out of the park. At night it is a beacon for the park and frames the space for after-dark use.

At the west, encircling the historic cenotaph, are a new larger meeting area near the street edge and a smaller seating area in behind, which acts as a belvedere onto a forested area of the park. Previously accessed only from the street side, the existing cenotaph is now approached ‘in the round,’ ringed by a new configuration of seating and gathering areas that enables this area to accommodate approximately one thousand Remembrance Day Service attendees comfortably and safely – without spilling out onto Queen Street, as was previously the case. This new area also acts as a belvedere onto the park.

New accessible paths descend diagonally into the park along a previously abrupt slope, creating an informal amphitheatre facing the park, protected from traffic noise. (A portion of the steeper slope was retained so that kids could still enjoy rolling down it.) The tiny amphitheatre is a place to gather, play, or simply look into the park. The streetscape is richly layered in types and sizes of spaces – all intertwined, with each incorporating lighting to extend diurnal and seasonal uses. Along the street, new seating is shaded by new red oaks and Freeman maples. Existing maples have been given new life in granular paved areas that improve root growth and irrigation. All of this has been achieved within a street-edge band only 30 metres deep – this small footprint preserves as much of the existing Victorian park as possible.

Hardscape elements include a unit-paved plaza, decorative pavers in a concrete paved plaza, benches and berm seating, and tree grates. The signature element of the streetscape is an 18-metre-long ornamental screen bearing Kew founder Joseph Williams’s description of the park: “a place of innocent amusement.” Conceived as a tribute to the park’s picturesque Victorian style – and as a 21st-century complement to Kew’s intact original Victorian chinoiserie-style bandshell – the screen’s imagery evokes 19th-century chinoiserie wallpaper. The cut flowers and leaves on the screen meld with the park’s trees in behind them. 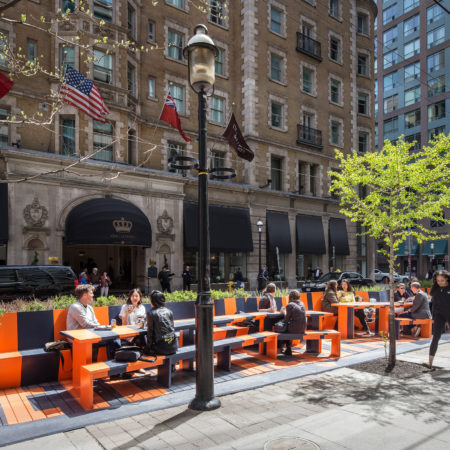 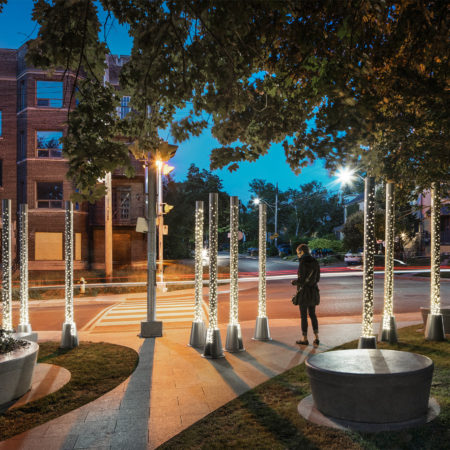 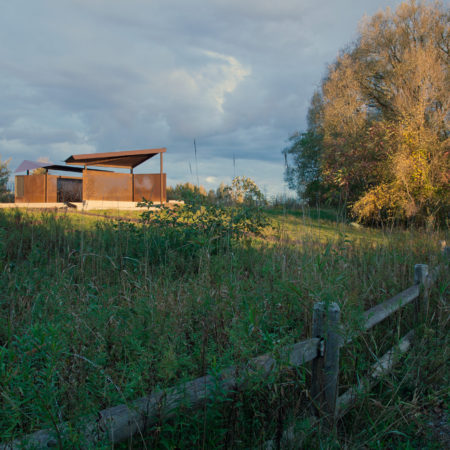 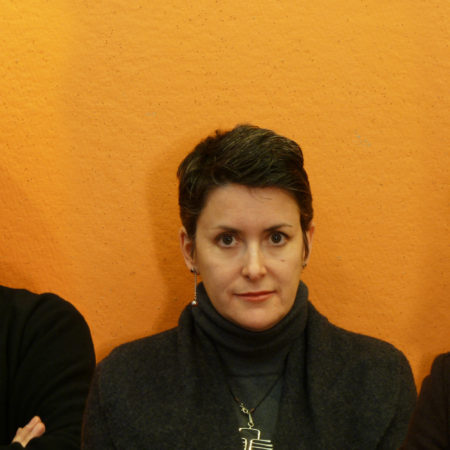