KLA is a practice who take on big roles in large parts of the city which have complex stakeholder groups. Unlocking the potential for access to nature and open space for thousands of residents is what our projects achieve. What underpins these big roles is engaging communities in a shared vision for their city.

Based in London, our thoughts often focus on mending the city’s strategic issues. We draw on some common themes: building capacity for change in communities through innovative public engagement and inclusion in the design process; The shift from the car to bike and the role of the bicycle in the city as a stimulator for social and physical change; An approach to play that explores urban playfulness in its widest sense – for all ages and in all urban locations; A preoccupation with history, memory and past identity of places; Forest or “Witness” trees in the City which root individuals in community, place, and mark the passing of time; the role and need for water in urban landscapes. KLA bring ecologies and habitats into the urban context and create a network of wonderful spaces that recognise the value of play, ecology and the sustainable water cycle.

Long term research and commitment to developing these ‘common themes’ within our practice support our goal to create meaningful and appropriate interventions that are valued by clients and communities. These themes are also common to the creation of more sustainable, distinctive, characterful and liveable urban environments.

The roots of our practice are founded in close collaboration with the arts, which has led to us fulfilling an urban curatorial role. This process is flexible and collaborative, allowing us to bring in artists and other facilitators to work with space and community as the project unfolds. These collaborations feed into a design process stimulating it with real public opinion, artistic input and one to one tests of ideas and space; the results are innovative urban interventions that truly address the complex contextual challenges of a place. 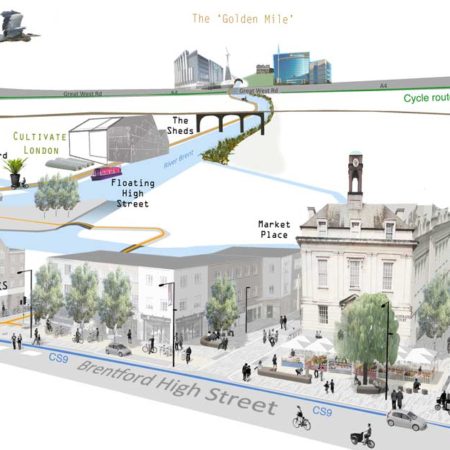 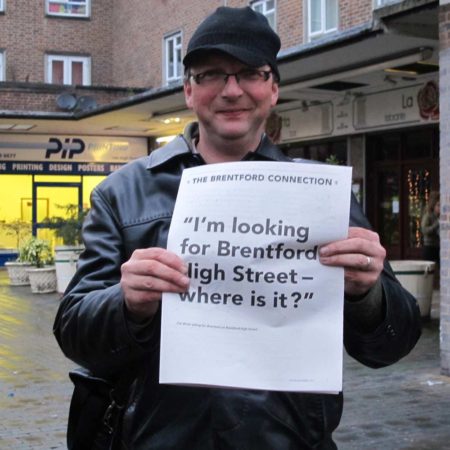 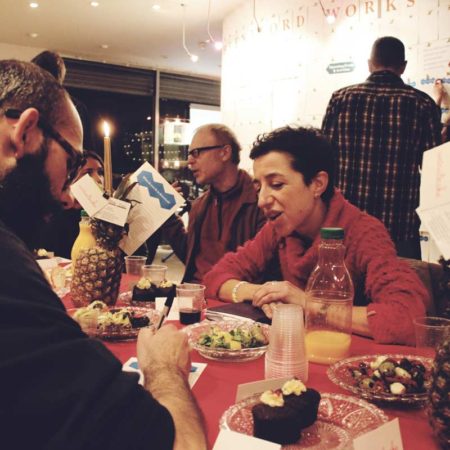 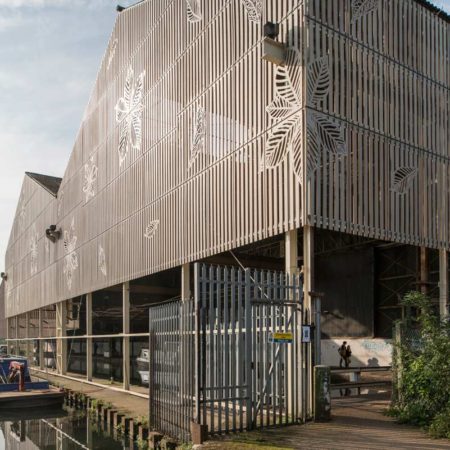 KLA’s ‘making the connection’ project, is an ambitious series of urban interventions with both physical and socio-economic layers, seeking to remake Brentford High Street as a successful town centre and reassert its sense of place and identity. Public engagement at different stages of the project with local people, shop holders, the high street steering group and local visually impaired group was absolutely central to the development of the project and can be directly related to both the diversity of ideas generated and their success. Different threads of the project: the cultural and economic venues of the market place and the sheds; cycling culture initiatives through Brentford Works and Brentford Bikes; and walking connections opened up by the sheds project, all pull towards making Brentford a more socially sustainable and liveable place. All of the project threads – of community, a shift in transport culture, the cultural and physical connections to the canal – come together in the public realm works in the Market Place. The newly configured flexible space accommodates regular markets and events whilst also providing a living room in the heart of the high street with a variety of opportunities for meeting and playing across all generations. Underpinned by thorough community engagement KLA’s work has laid foundations for Brentford to become a more liveable, prosperous and socially sustainable place. 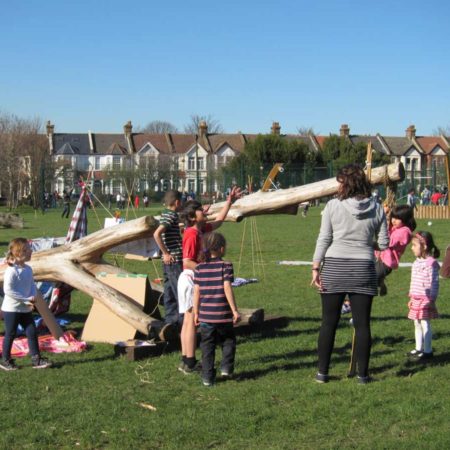 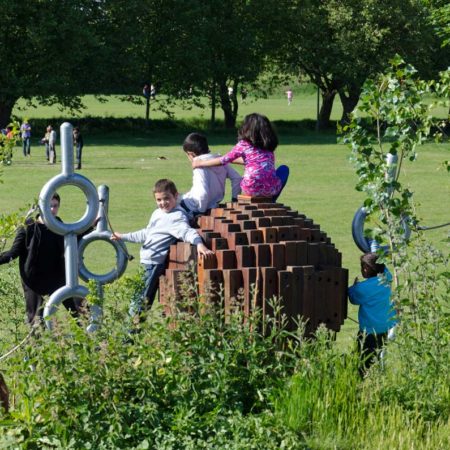 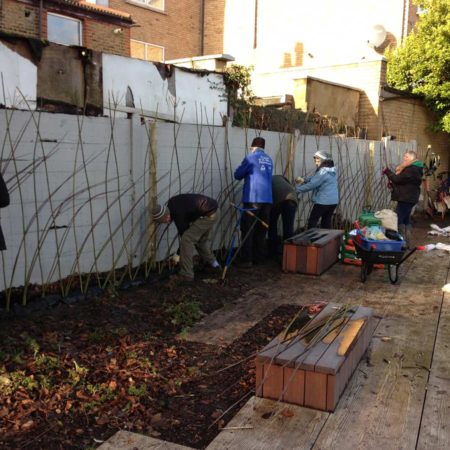 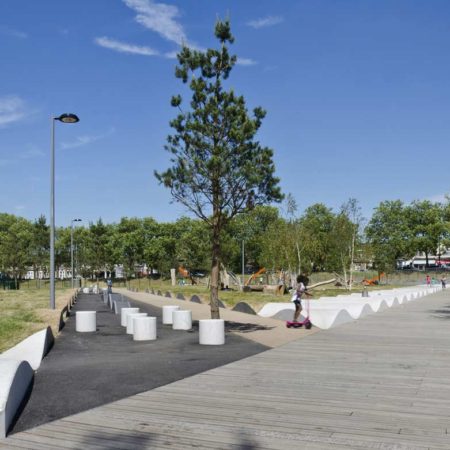 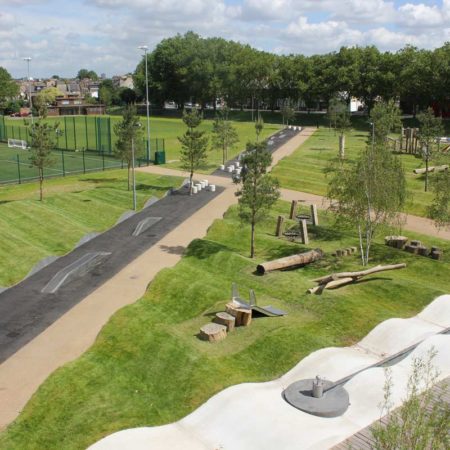 KLA were commissioned to revitalise three parks in Leyton, through Olympic Section 106 funds. The brief was to rejuvenate these parks; to give neighbourhoods new spaces to be proud of and to increase play and sports facilities, supporting the Olympic legacy ethos of improved access to sport. This involved redesign of Drapers Field, creating a landscape for ecology and play at Marsh Lane, and integrating new sports facilities at Abbotts Park. KLA developed masterplans for each site through community engagement and client and stakeholder involvement. Simple site based concepts responded to the site and its context and were then tested through engagement with a wide range of users. At Abbotts Park, KLA worked with ‘Green Gym’ volunteer group who maintain green spaces as a way of keeping fit and healthy in older age. KLA designed the new willow wall in collaboration with local willow artists and Green Gym who constructed and maintain it. At Marsh Lane, a social project included training for local young people in construction skills, engaging them in the renewal of their green space. Drapers Field, a previously underused space has become a central place for new and old communities. KLA tackled strategic London wide issues such as childhood obesity by establishing opportunities for spontaneous activity and intergenerational play within a playful urban realm; and allowing space for cycling skills and cycling to school. 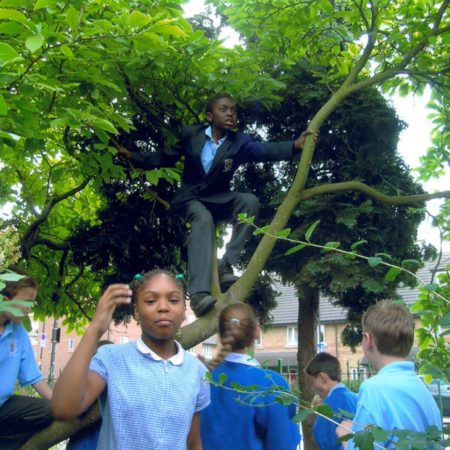 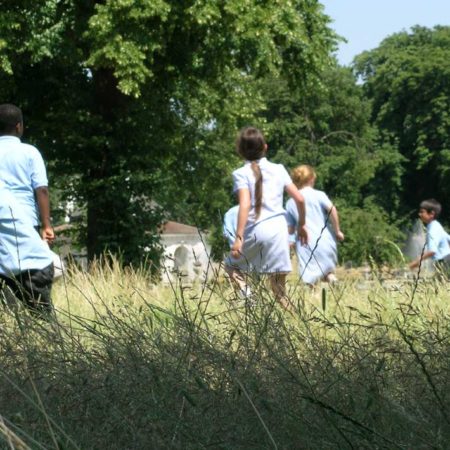 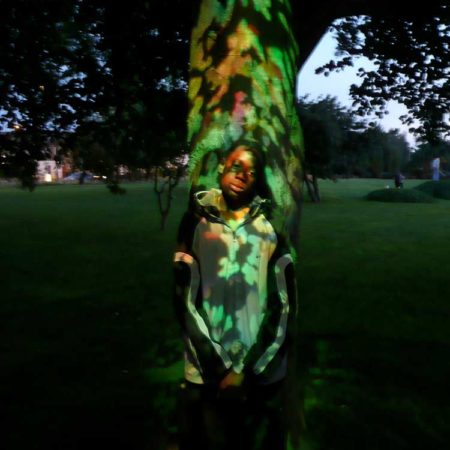 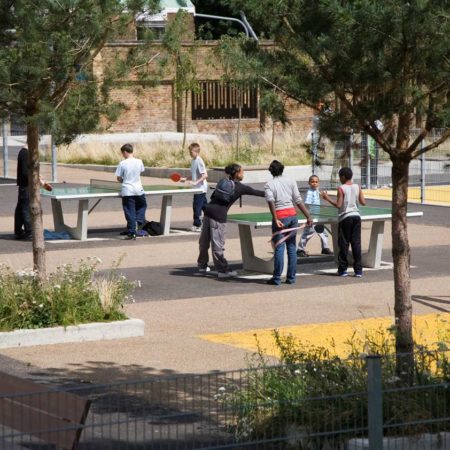 Normand Park is a landmark local park for a varied community in west London. Since its renewal the park has become a focus for community pride. This innovative, high quality flexible space offers choice for users in relaxation, active pursuits and play for all. Involvement of the community through artist led consultation was paramount to ensure the park was embraced by those who use it. Part of the consultation targeted at hard to reach local young people. Artist, Faisal Abdu’ Allah, worked with teenagers on a photography and video project that focused on perceptions of identity. Young people were then part of the steering group for the arts lighting project with Jason Bruges Studio. Artist, Gayle Chong Kwan, engaged with local primary school children on the idea of apple and fruit tree growing, referencing the best climbing trees in the park and the history of the park as an orchard. Writer, Paul Shepheard, worked on memories of the park with older people. These projects provided the design team with invaluable insights into current ownership issues between different user groups, and gave participants an opportunity to be heard and seen. The artist-led consultation projects opened up the project and design process to a much larger number of people than would have otherwise been possible. KLA addressed the polarised needs of different communities, creating a well-supported space that reflects the character and history of the area. 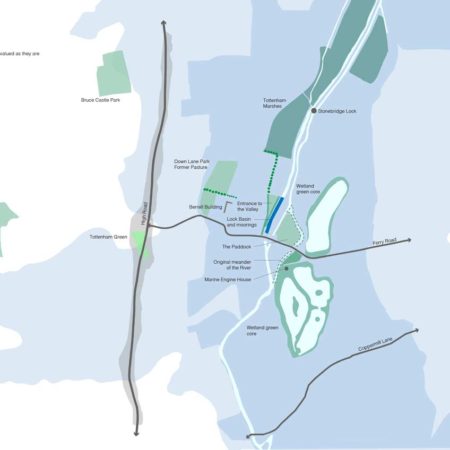 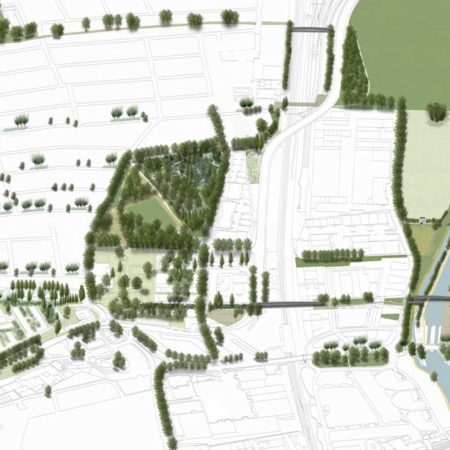 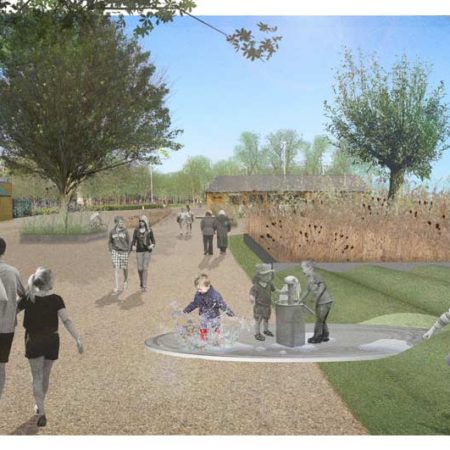 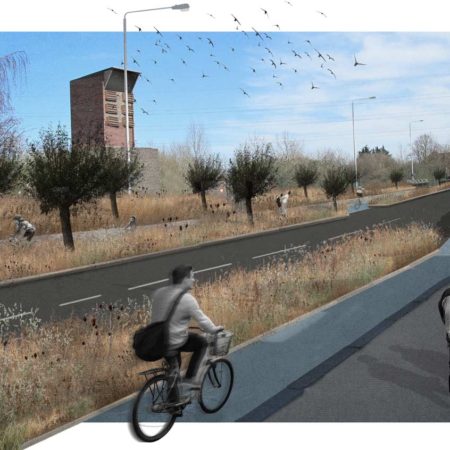 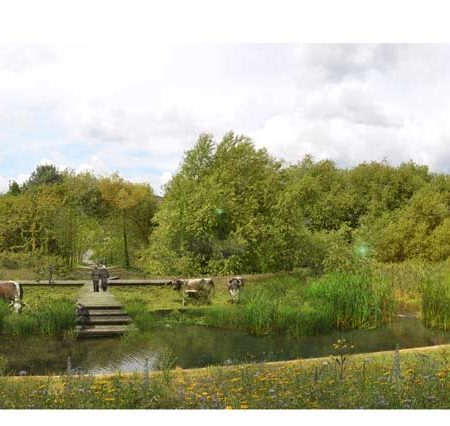 This strategy improves access and movement for local residents via a network of routes and bridges linking local green and open spaces, safeguarding ecology and enhancing the riverine character of Tottenham in key locations. The high degree of urbanisation has caused the natural valley corridor to be lost. Reinforcing this natural heritage, making it visible within urban realm and creating high levels across the valley was key. Cross borough initiatives were developed covering flooding issues, contamination and SuDS schemes. KLA’s strategy informs the development of 5000 new homes as part of the Greater London Authority Housing Zone which will see a dramatic increase in the population creating an open space deficit in the area. KLA reviewed the potential to increase the open space and worked with District Centre Framework team to influence the development proposals by the re-orientation of blocks to create an improved open space offer, improved movement routes and vistas through developments to tree planting and courtyards. Proposals provides a SuDS channel along existing residential streets to collect and filter surface water from the roadway. This system will extend the Lea Valley to local people’s door steps, enabling locals to engage with this environment on a daily basis. SuDS design is being used here to help reclaim streets from vehicles and introduce a more community friendly environment. 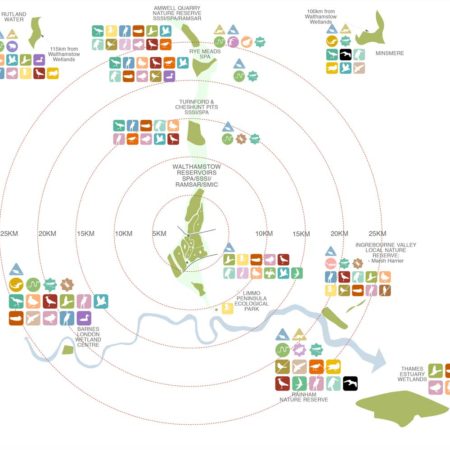 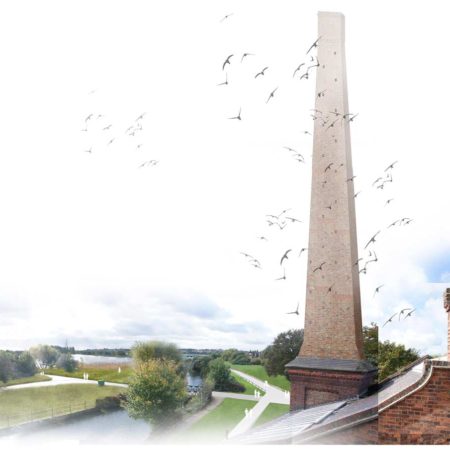 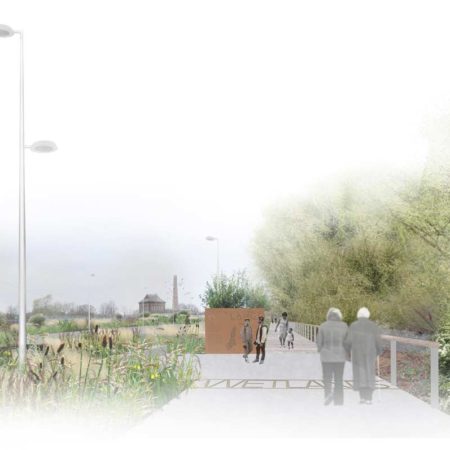 This ambitious project will open up 200 hectare Walthamstow Reservoir site to the public, allowing it to become a vital destination for people and wildlife. The site has cultural, industrial and natural heritage value is an oasis of ecological biodiversity between the densely populated areas of Tottenham and Walthamstow. The nature conservation value, industrial heritage, operational functionality and distinctive landscape character of Walthamstow Reservoirs is unique in London. This distinctive nature stems from the site’s importance as a historic operational landscape that supplies drinking water to London, and its rich biodiversity, which is of international importance for water birds. It will be the largest nature reserve in Europe. The concept is to create a ‘green core’ of naturalised landscape at the heart of the reservoir complex. New entrances connect into existing communities, many of which are deficient in access to nature. A clear generous pathway runs through the centre of the site linking these entrances and connecting to the strategic pedestrian and cycle route which runs through the middle of the Lea Valley. A new visitor centre located within the refurbished Marine Engine House pumping station is located at the centre of green core. High Level views of this enriched landscape from the Marine Engine House and Coppermill viewing platform, allow visitors to understand their place in this distinctive city landscape.